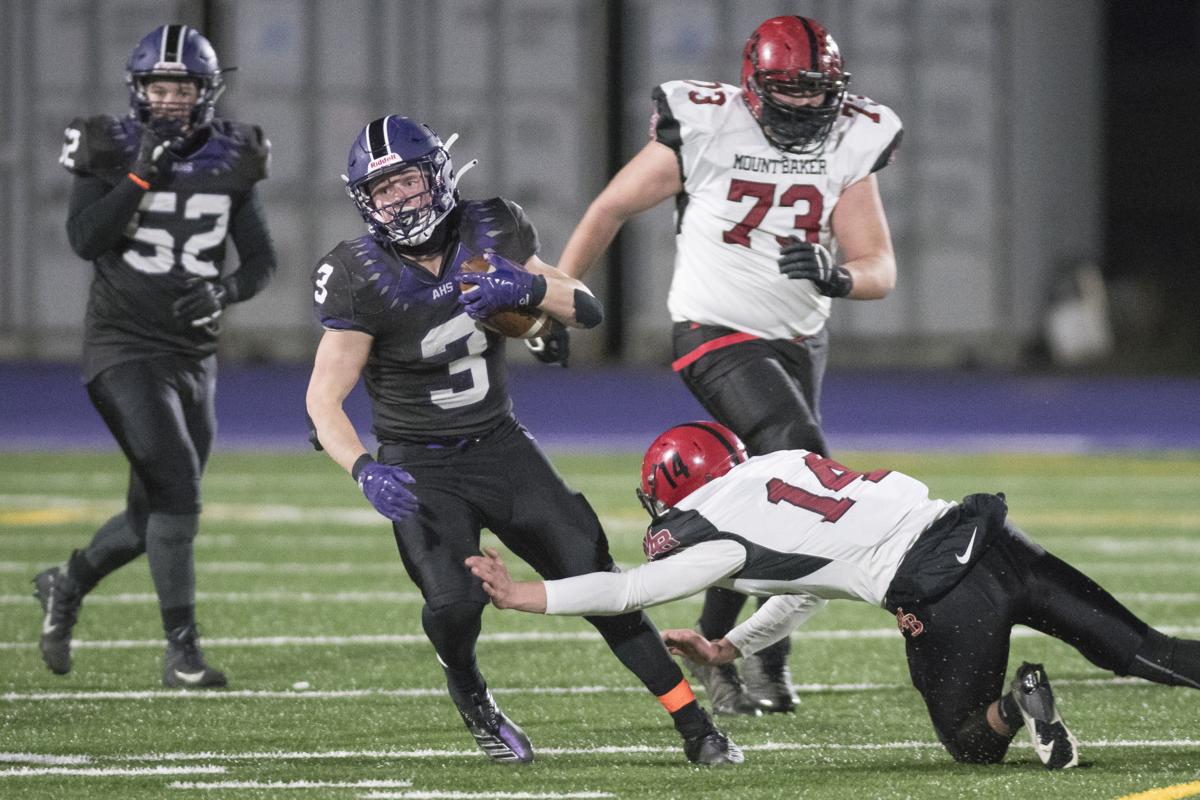 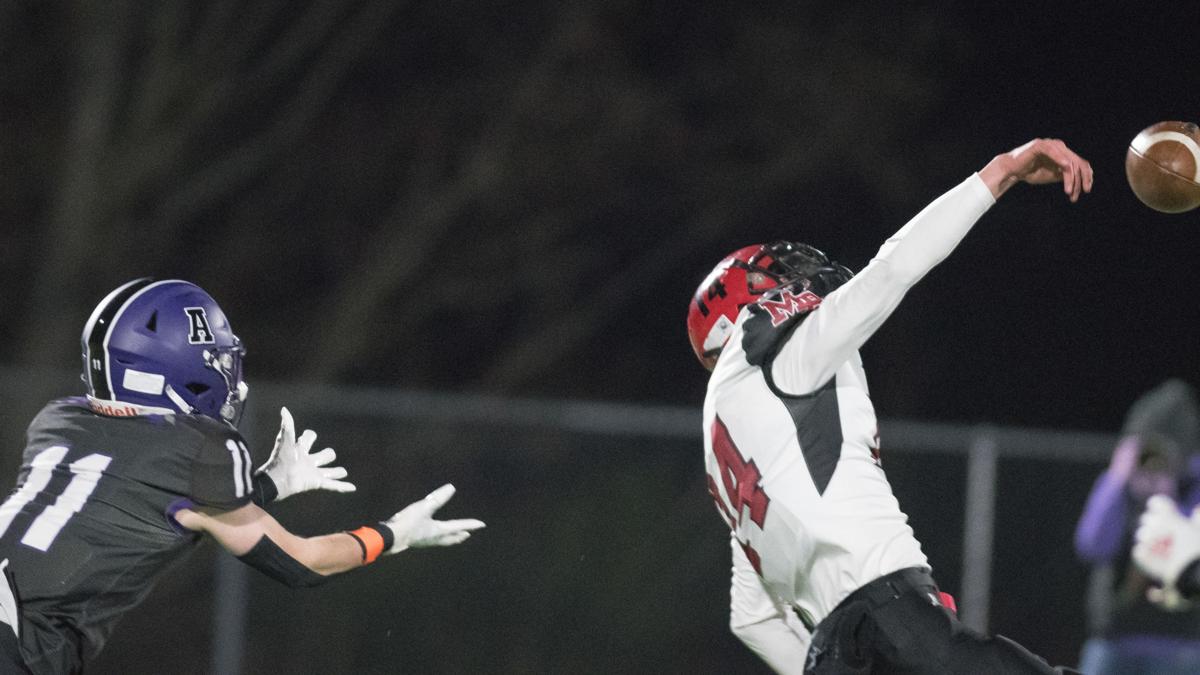 A pass intended for Anacortes' Carson Portz (11) is batted down by a Mount Baker player on Thursday in Anacortes. Anacortes lost, 48-14. 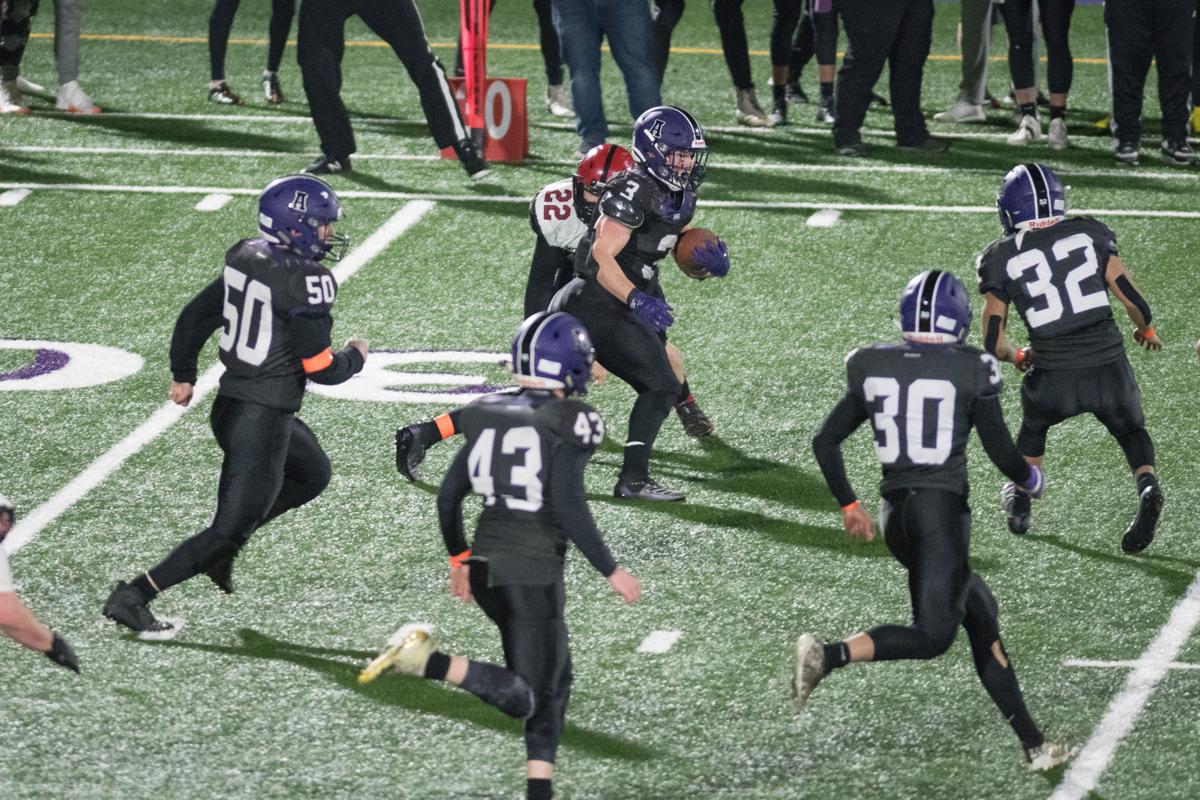 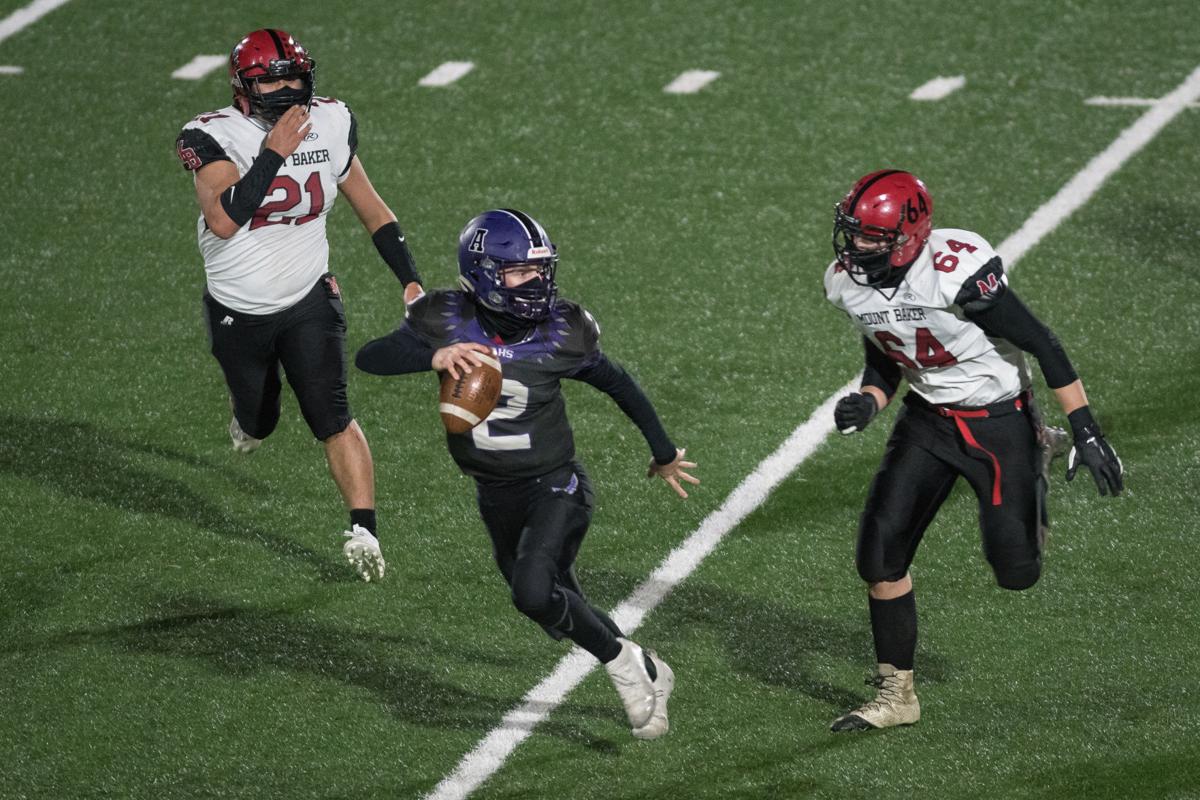 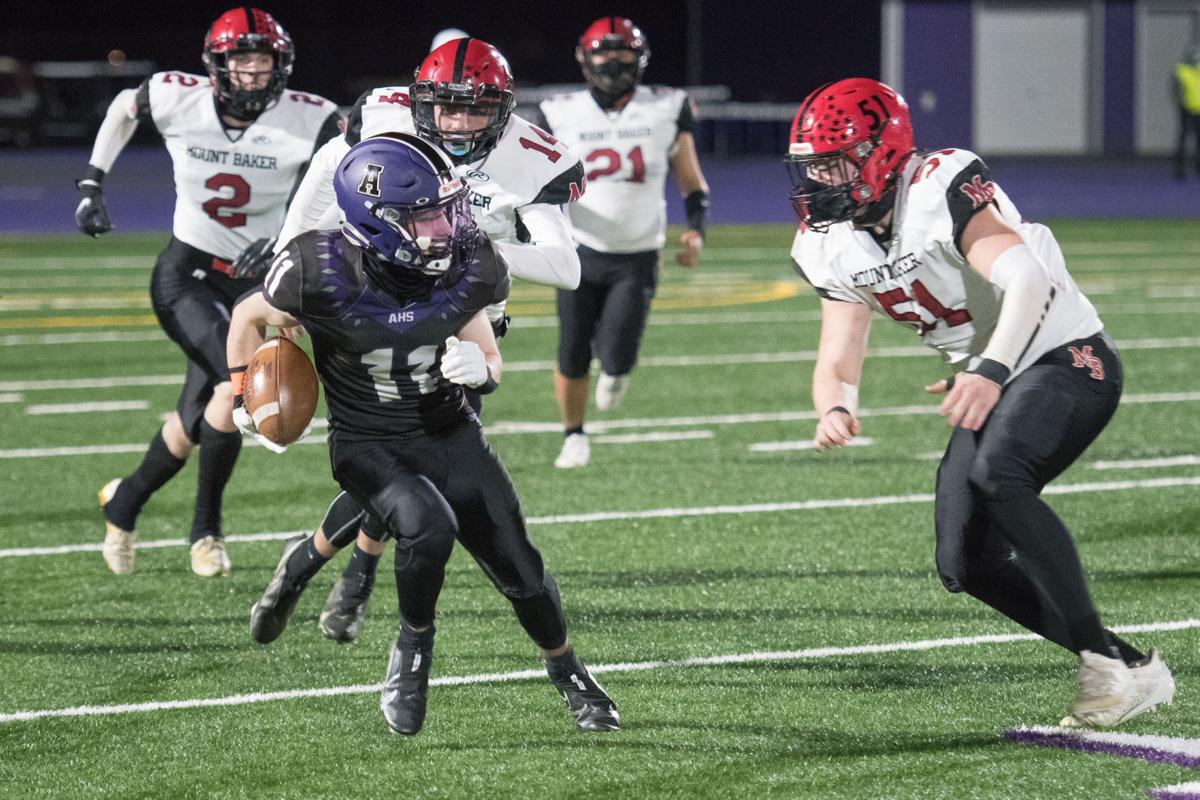 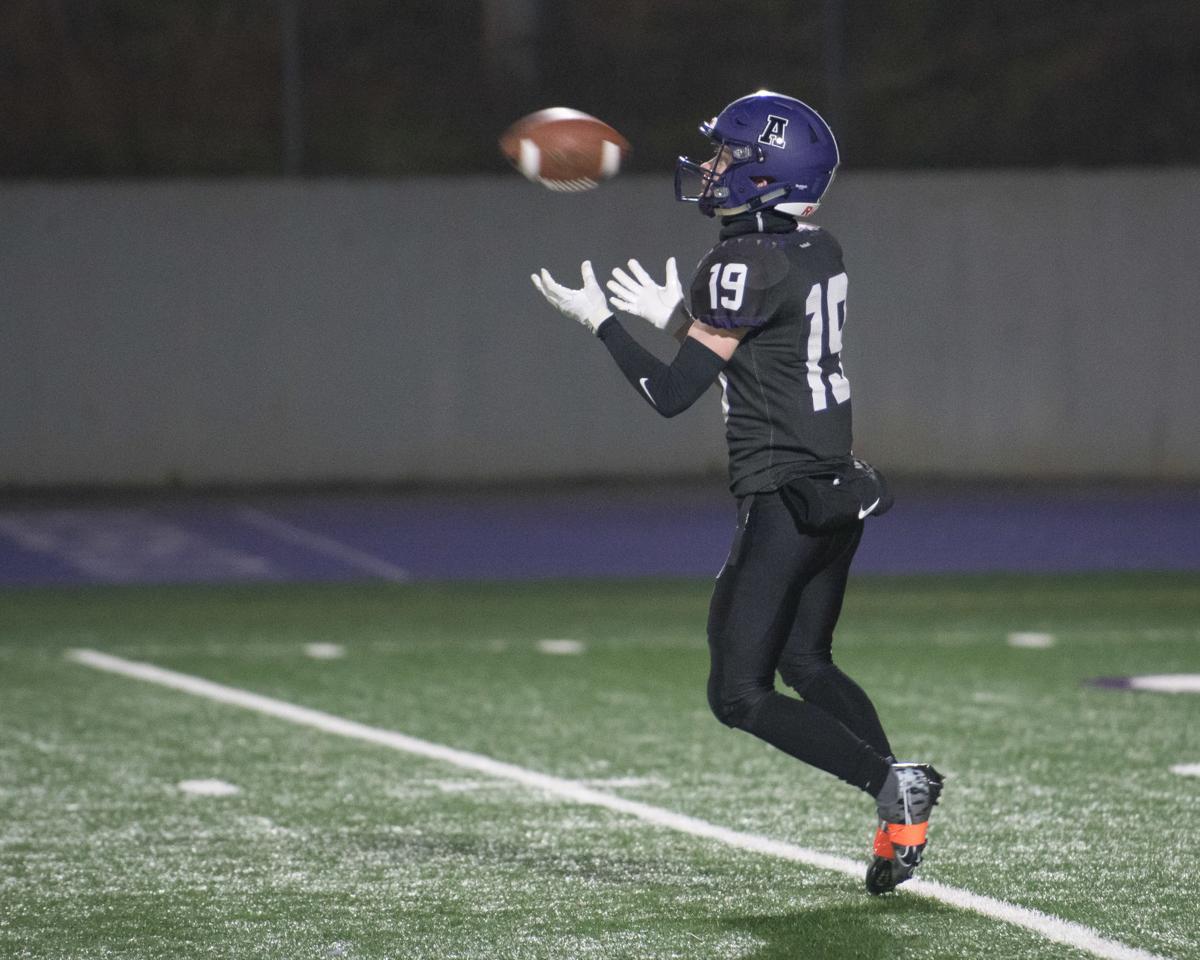 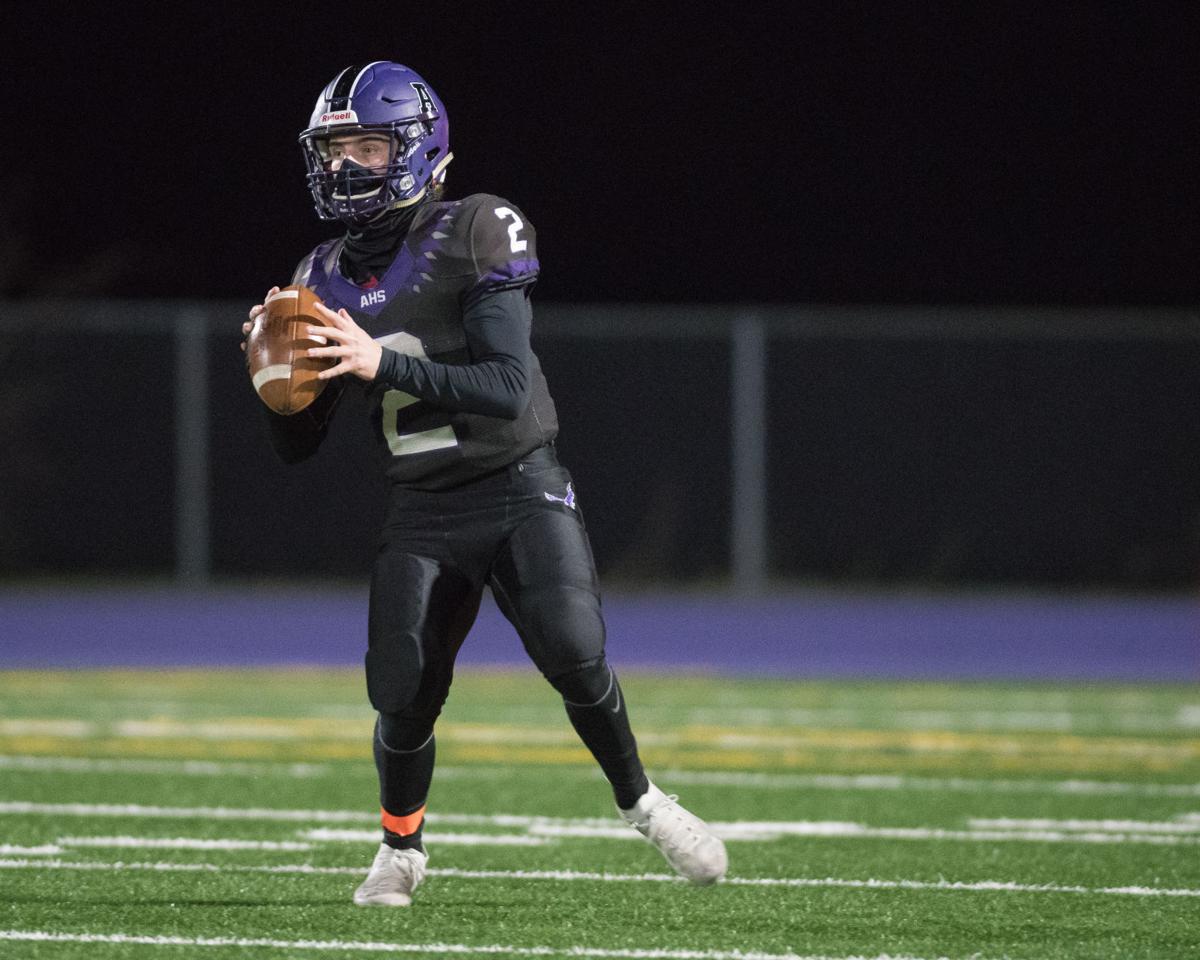 A pass intended for Anacortes' Carson Portz (11) is batted down by a Mount Baker player on Thursday in Anacortes. Anacortes lost, 48-14.

The Mountaineers left town with the 47-14 victory as the Seahawks fell to 1-3 on the season.

The Seahawks trailed 14-7 at halftime, then surrendered 33 unanswered points to the Mountaineers.

Joseph Cutter and Rex Larson each spent time at quarterback, with Cutter passing for 35 yards and Larson for 48.

OAK HARBOR — The Bulldogs fell behind in the first half, then rallied in the second to claim their first win of the season.

Mount Vernon trailed 21-17 at the break, however, the visitors shut out the home team in the third quarter while scoring a touchdown themselves to take the lead 24-21.

The fourth quarter was all Bulldogs (1-3) as they put up 16 points while holding the Wildcats to six.

Mount Vernon quarterback Cole Williams passed for a touchdown, finding Van Stroosma. Williams ended the game 6-for-11 for 80 yards and the score. Stroosma had three catches for 25 yards and the touchdown.

Nathan Hensley connected with Trent Hensley for a 70-yard touchdown pass for the Bulldogs.

On the ground, Taylor Saben led Mount Vernon with 19 carries for 118 yards. Alex Fast finished the game with 10 carries for 85 yards.

Mount Vernon kicker Israel Reyna connected on field goals from 39 and 33 yards and was 4-for-5 on extra points.

Stroosma also got it done on the defensive side of the ball with nine tackles. Fast made six tackles and had an interception.

SEDRO-WOOLLEY — The Cubs couldn't get anything going on either side of the ball in dropping to 1-3.

"Overall, the game was decided pretty early," said Sedro-Woolley coach Johnny Lee. "We had a hard time matching their size and physicality. A pretty frustrating night as we got pushed around on both sides of the ball."

Austin Crossen led Sedro-Woolley in rushing with 14 carries for 105 yards while Isaiah Baretto carried the ball seven times for 36 yards. Sedro-Woolley used 10 different ball carriers, rushing for 233 yards in an attempt to crack the Lions' defense as the Cubs' passing game was non-existent.

"Offensively, we ran the ball well," Lee said. "Crossen stepped up and had a nice game filling in for an injured Connor Davis. But we struggled to protect (quarterback) Carsten (Reynolds) in the passing game.

"Defensively, we struggled to stop the run. They were able to get big chunk plays running right at us. Xander Connelly had a nice game in his first start at linebacker."

FERNDALE — The Golden Eagles led 35-0 at halftime and never looked back.

"This was a tough challenge for us tonight," said Burlington-Edison coach Andrew Olson. "I am proud of how this group continued to play hard and support each other in the face of adversity. This was a good learning experience against a great opponent."

Burlington-Edison quarterback Zach Watson finished the game 7-for-19 through the air for 96 yards and an interception. His favorite target was Bode Brewer, who had four catches for 68 yards, an average of 17 yards per grab.

Always a threat to scramble away from the defense, Watson also led the team in rushing with 10 carries for 139 yards and a touchdown.

Francisco Sanchez-Mendoza scored Burlington-Edison's other rushing touchdown and had 10 carries for 48 yards.