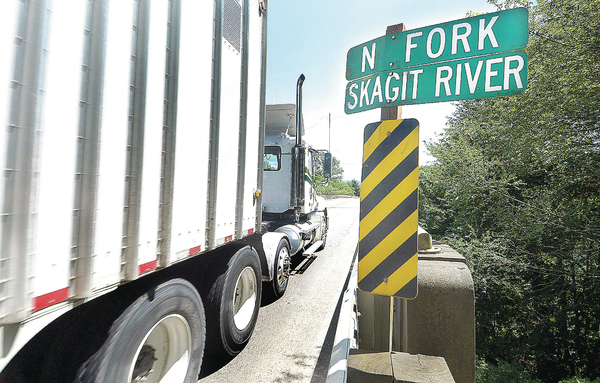 County and state traffic engineers have deemed the bridge over the north fork of the Skagit River safe for the increased amount of traffic trying to avoid the Interstate 5 Skagit River Bridge collapse site. Frank Varga / Skagit Valley Herald 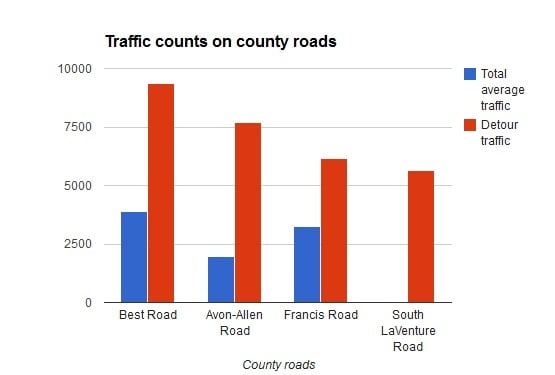 Traffic on county roads has increased since a span of the Skagit River Bridge collapsed on May 23. Kate Martin / Skagit Valley Herald

County and state traffic engineers have deemed the bridge over the north fork of the Skagit River safe for the increased amount of traffic trying to avoid the Interstate 5 Skagit River Bridge collapse site. Frank Varga / Skagit Valley Herald

Traffic on county roads has increased since a span of the Skagit River Bridge collapsed on May 23. Kate Martin / Skagit Valley Herald

MOUNT VERNON — Large truck traffic in some parts of the county has increased by more than 500 percent since the May 23 collapse of the Interstate 5 Skagit River Bridge.

The figures shouldn’t surprise anyone who has traveled through the county on local roads lately. About 71,000 vehicles per day crossed the bridge before the collapse. North-south traffic is being rerouted along many other local roads, including Avon-Allen Road, Burlington Boulevard, Riverside Drive in Mount Vernon and Highway 9.

County roads data, released Tuesday during a traffic safety briefing, shows many people are finding their own paths around the gridlock.

In some cases, they are creating gridlock of their own.

The county road that saw the largest increase in tractor-trailer traffic was Best Road west of Mount Vernon. Before the collapse, nearly 200 trucks traveled on the road every day. That number has soared to 1,166 in recent days, according to the data.

Traffic on Best Road passes over a structurally deficient bridge at the North Fork of the Skagit River. However, county and state traffic engineers have deemed the bridge safe for the increased amount of traffic, said Skagit County lead transportation programs engineer Forrest Jones during the Tuesday briefing.

“It’s quite an increase from normal traffic,” Jones said. “Everybody says its safe.”

Avon-Allen Road, which normally sees 1,975 trucks and cars each day, experienced the largest numerical increase of the roads measured. Now, 7,692 vehicles travel on the road, which has been identified as a main detour route by the state Department of Transportation.

The evening commute at Highway 9 and Francis Road near Clear Lake remains congested, said State Patrol Sgt. Scott Betts. He said the department still sends troopers out to manually direct traffic if they are available.

Fortunately for locals, the traffic won’t be an issue much longer. State DOT employees said they expect the temporary bridge span to be completed by the end of next week. The speed limit will be greatly reduced along the temporary, 160-foot span — around 40 mph, said Mike Koidal, DOT traffic operations engineer.

Traffic leading up to the temporary bridge will have to slow down in advance of the temporary span to avoid potential collisions. Betts said he was worried about giving drivers enough notice and vowed to keep troopers in the area to enforce the speed limit.

A weight limit also will be set up for the temporary span, which will allow more than 90 percent of truck traffic across, said Gary Ward, a maintenance superintendent with DOT. Legal loads will be allowed across the bridge, which include most logging trucks. The actual weight of loads allowed depends on the number of a truck’s axles.