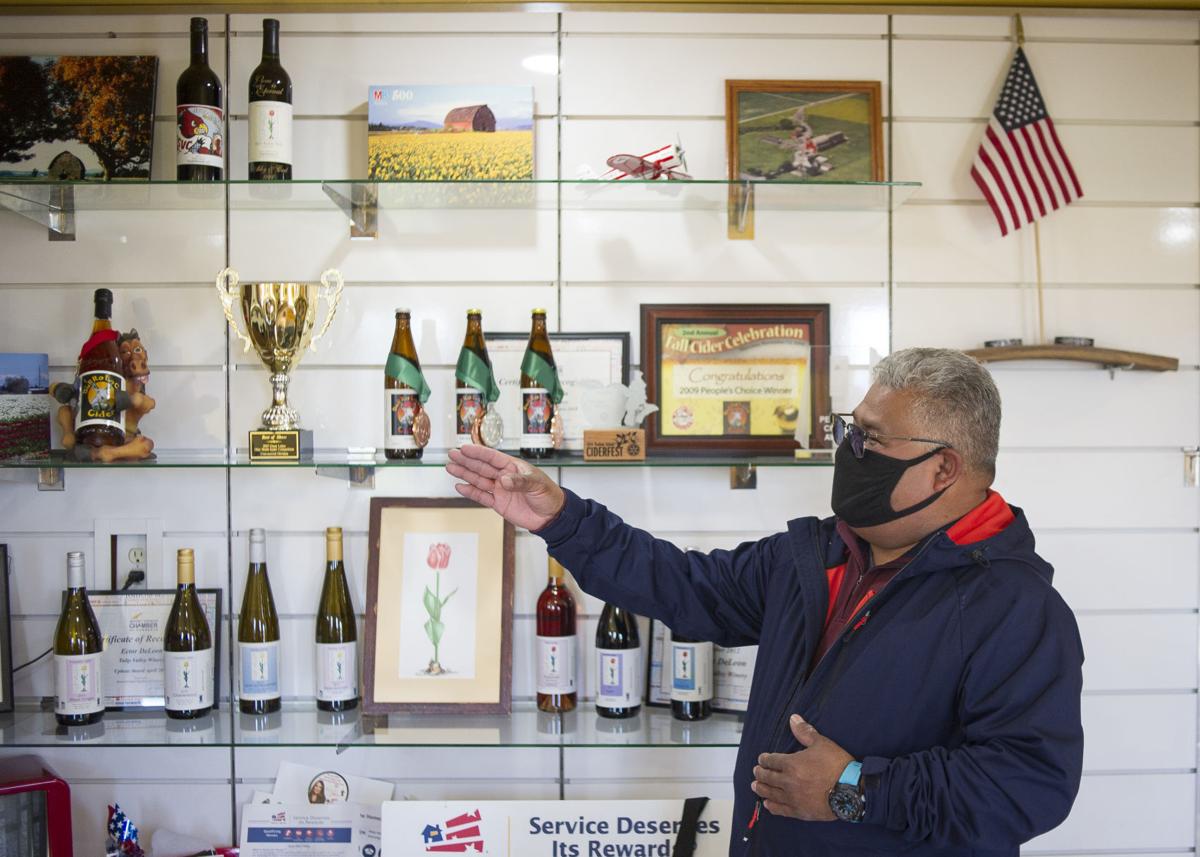 Tulip Valley Winery owner Ector DeLeon motions Wednesday toward a display with art, awards and bottles at the winery west of Mount Vernon. 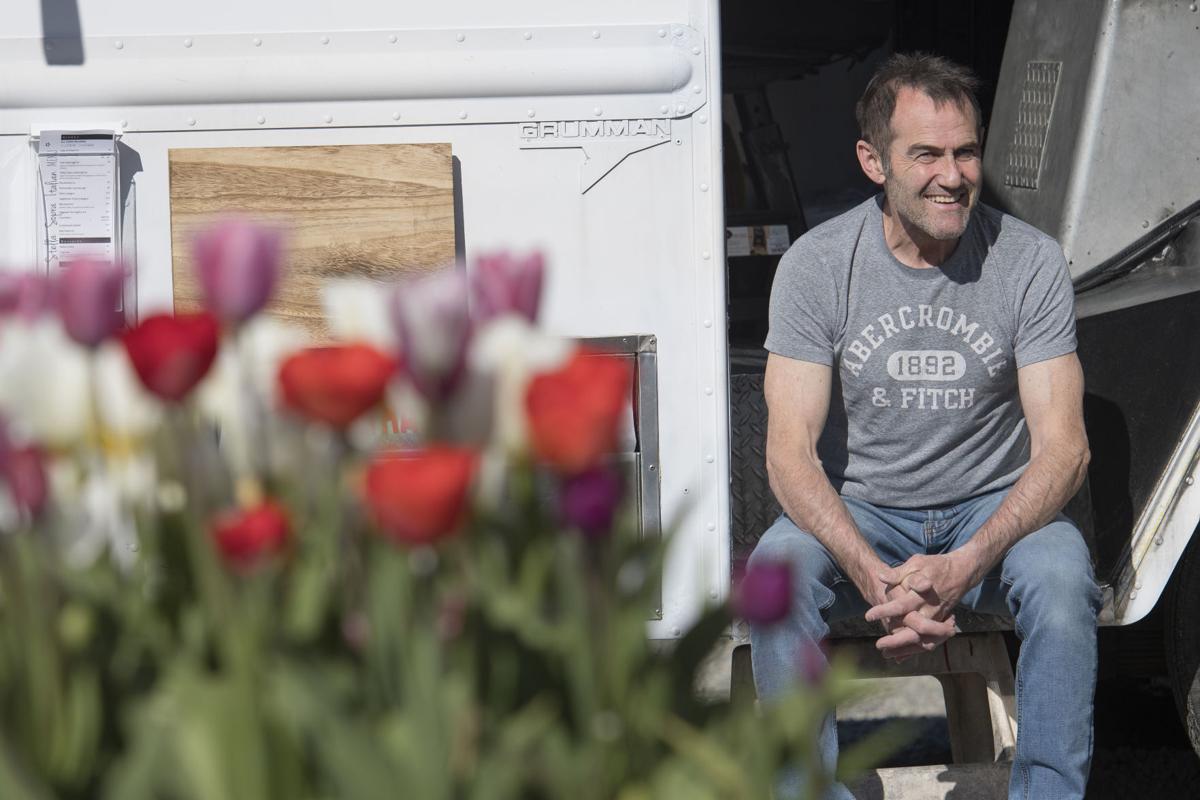 Alberto Candivi, owner of the food truck Stella Sopra Italian, poses for a portrait outside the truck Wednesday west of Mount Vernon. The truck is parked outside Tulip Valley Winery, one of the many businesses impacted by the visitors to the Skagit Valley Tulip Festival. 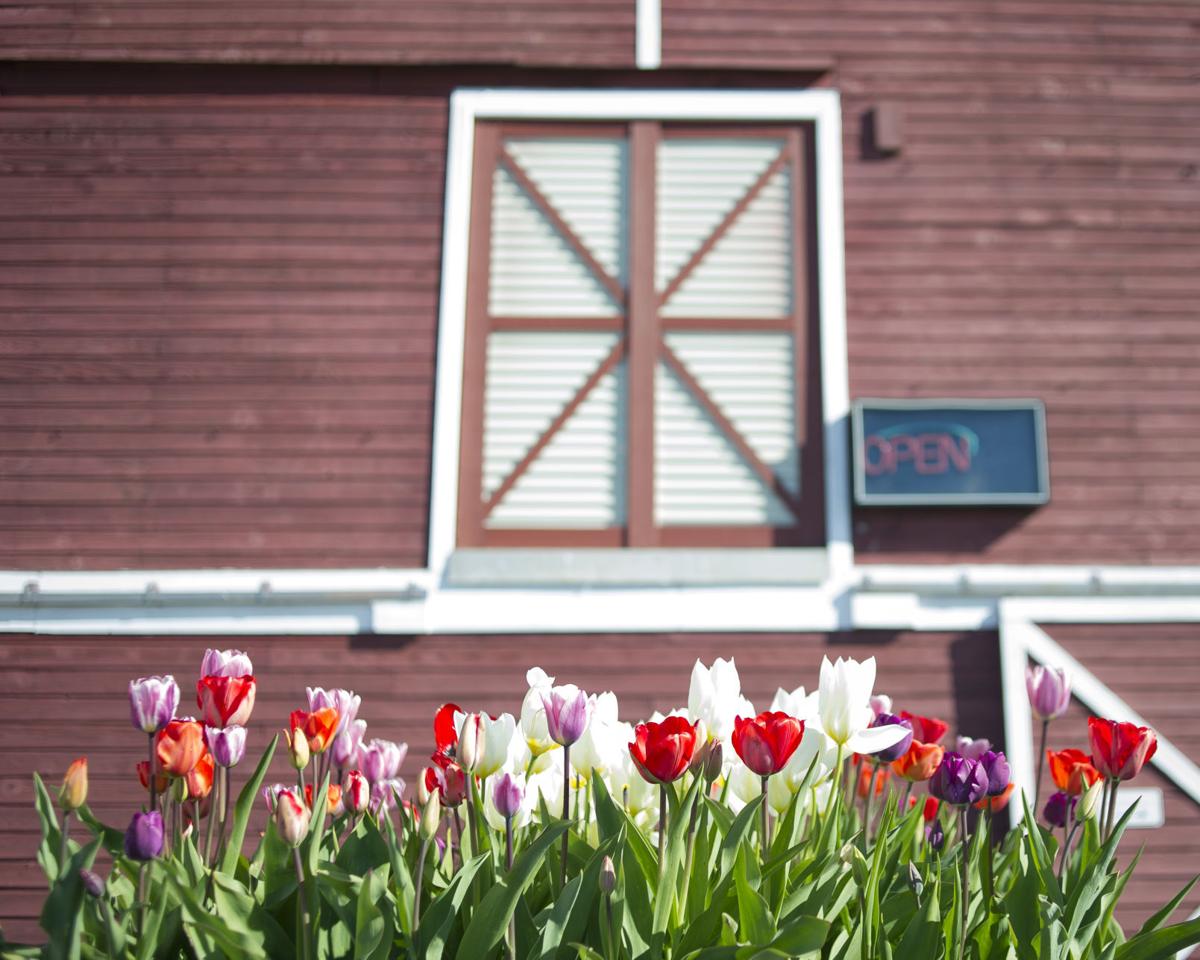 Tulips bloom in a planter Wednesday outside of Tulip Valley Winery west of Mount Vernon. Owner Ector DeLeon says during the Skagit Valley Tulip Festival the business makes  almost 50% of the year's revenue. 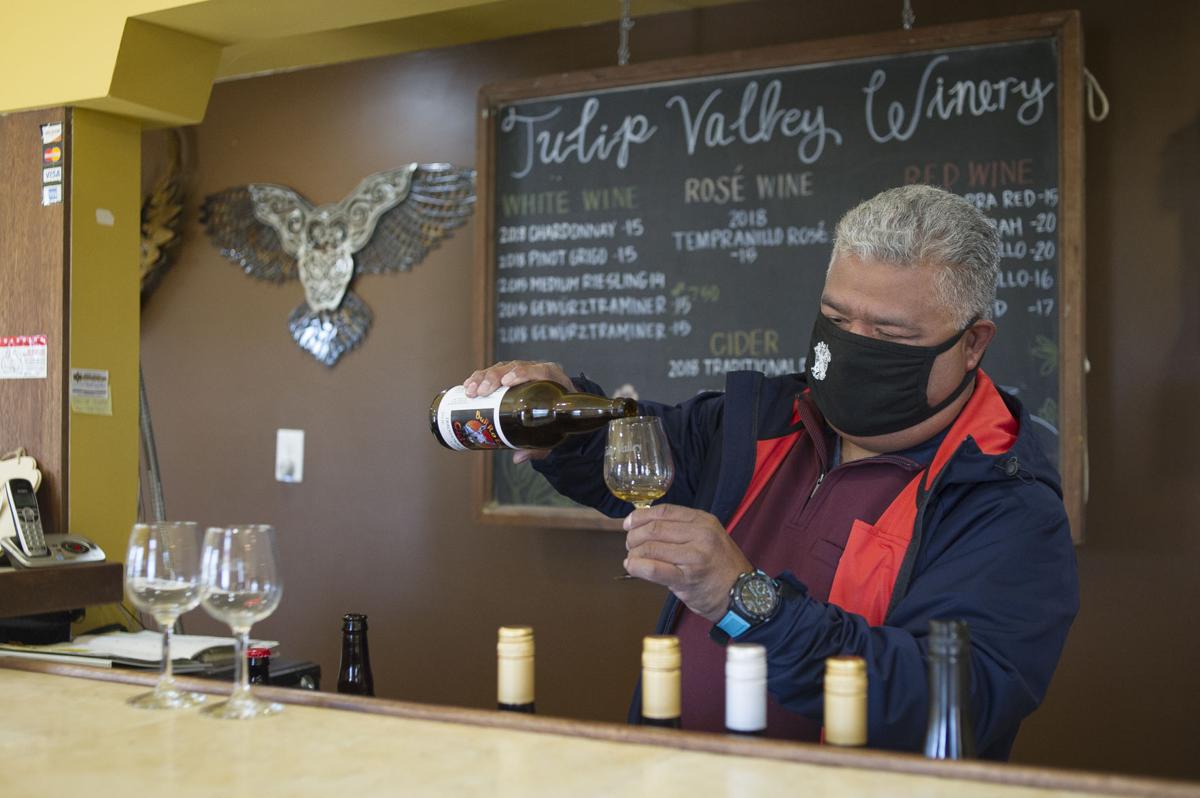 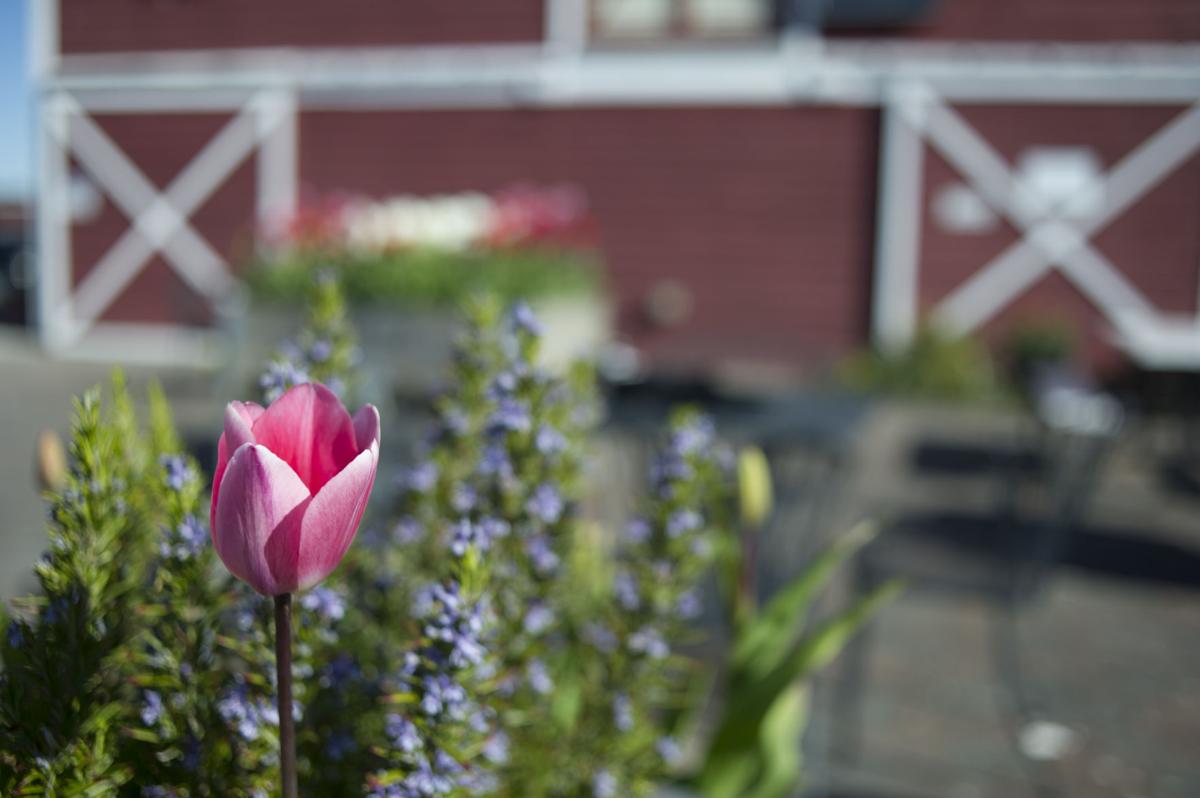 A tulips blooms in a planter Wednesday outside of Tulip Valley Winery west of Mount Vernon.

Tulip Valley Winery owner Ector DeLeon motions Wednesday toward a display with art, awards and bottles at the winery west of Mount Vernon.

Alberto Candivi, owner of the food truck Stella Sopra Italian, poses for a portrait outside the truck Wednesday west of Mount Vernon. The truck is parked outside Tulip Valley Winery, one of the many businesses impacted by the visitors to the Skagit Valley Tulip Festival.

Tulips bloom in a planter Wednesday outside of Tulip Valley Winery west of Mount Vernon. Owner Ector DeLeon says during the Skagit Valley Tulip Festival the business makes  almost 50% of the year's revenue.

A tulips blooms in a planter Wednesday outside of Tulip Valley Winery west of Mount Vernon.

With tulips blooming in the Skagit Valley, visitors are filling up hotels and patronizing businesses, bringing a needed boost after a year of COVID-19 challenges.

The Skagit Valley Tulip Festival draws an estimated 400,000 each year and injects $65 million into the local economy. Those guests and dollars were lost last April to the pandemic.

This spring, tulip growers are able to have guests, though with capacity limitations and reservations required. Skagit County remains in Phase 3 of reopening, permitting restaurants to seat up to 50% capacity indoors, among other restrictions.

Despite the restrictions, businesses say they are happy to have guests back, especially in time for the tulip season.

Ector DeLeon, co-owner of Tulip Valley Winery west of Mount Vernon, said business in the winery’s tasting room has increased, though remains slower than in typical years. He hopes the winery will get busier this weekend with nice weather and tulips reaching full bloom.

“When we have a really good April, it kicks off the year,” he said. “What I do in April is what I do in almost a year. It’s like 50% (of business). It helps me get through the year and keeps the business running.”

Due to COVID-19, the winery isn’t able to offer all the attractions it would in a normal year, such as helicopter rides with aerial views of tulip fields. However, a new food truck called Stella Sopra Italian recently opened at the winery.

DeLeon said despite the border being closed and cutting off the flow of Canadian tourists, more Seattle-area residents are visiting. He said guests tend to stay for several days, and he tries to make suggestions of other businesses and places in Skagit County to visit.

“A lot of these tourists are so amazed of the beauty and amazing stuff we have to offer here in the valley,” he said.

DeLeon said when guests visit the winery they are able to see how tourism and agriculture go hand-in-hand in the Skagit Valley.

Chuck Jackson, co-owner of Skagit Crest Vineyard & Winery in Sedro-Woolley, said business in April has been nearly on par with 2019. The winery’s tasting room in La Conner is open Fridays, Saturdays and Sundays, and the Sedro-Woolley vineyard is open by appointment only.

“We’ve been able to get along with the ability to have our outside seating through the more closed phases,” Jackson said. “Now that we’re able to have 50% indoors and still have our outdoor seating, it’s been working well for us.”

He said the winery is getting visitors from throughout the country, though most hail from the Seattle area.

“We greatly appreciate (having guests again),” he said. “We felt lucky that we were able to make it through last year financially, and it’s now getting back to normal.”

The chamomile farm and English tea house is open for “Tea and Tulips” by reservation only every Friday and Saturday in April.

“April is my busiest month, it’s the month I can depend on people coming to see tulips and looking for something to do,” Gifford said.

Last spring, the business had to refund reservations after COVID-19 forced it to close. Gifford said she is grateful for government-provided financial assistance, including grants and loans, that helped the business survive.

She said she did not want to reopen too early and contribute to the spread of COVID-19. She said in addition to indoor seating, the manor has an outdoor tea tent that provides good airflow, which helps reduce the spread of the virus.

“Honestly it’s been so positive,” Gifford said. “Everyone is so grateful to have the ability to come. A lot of the older women who come are vaccinated and they feel secure in venturing out again.”

She said bookings are spread throughout the week and many are making last-minute reservations. The inn reopened in March after an extended closure due to COVID-19.

“Being closed eight or nine months, we needed to make up some lost revenue,” she said.

Burrell said the hotels’ biggest challenge is “some very significant shortages in employees.”

“A lot of employees are working extra hours,” she said. “Everybody is kind of all hands on deck right now.”

John Sternlicht, CEO of the Economic Development Alliance of Skagit County (EDASC), said there will be two important indicators of how well tourism rebounds in the county.

One is sales tax revenue. Those numbers are available two months after tax is collected.

Sternlicht said the other indicator is revenue from the $2-per-night charge on hotel stays authorized under the newly-formed Skagit County Tourism Promotion Area (TPA).

He said EDASC is working with the TPA’s advisory board to set up a marketing organization that will use the revenue to promote tourism countywide.

In April 2020, taxable retail sales in Skagit County declined by $68 million, a 26% drop, compared to 2019, according to the state Department of Commerce’s Economic Recovery Dashboard.

“I think you can do the subtraction and figure out how important it is to bring people in and have them spend money in Skagit County, to fill up hotels and restaurants, even at 50%,” Sternlicht said. “It’s not going to be what it was two years ago, but will be better than what it was last year.”