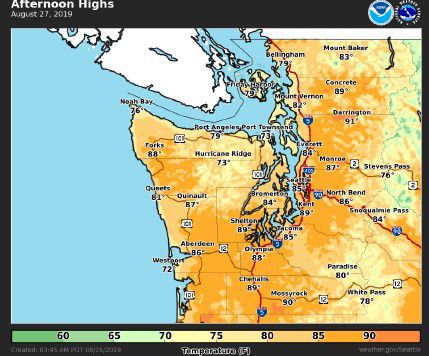 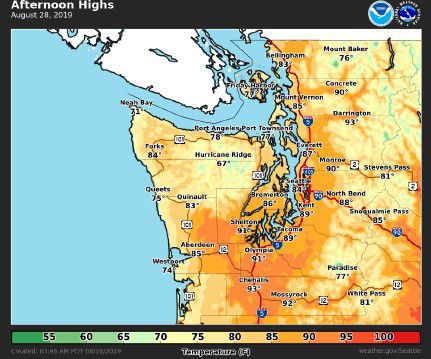 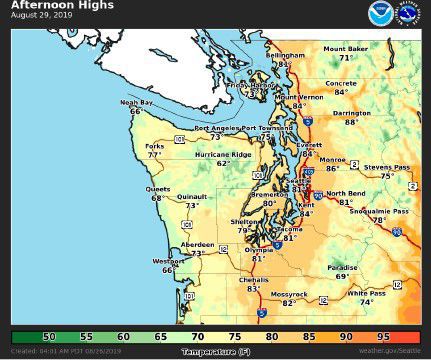 The hottest days of the summer may be ahead this week, with temperatures in parts of Skagit County forecast to reach into the high 80s Tuesday and possibly into the 90s Wednesday.

Moderate risk means those who are sensitive to heat or not adequately hydrated may be at heightened risk for heat-related illnesses.

The elderly, those with health issues and the homeless are most at risk, and children and pets left outside are also at increased risk, according to the weather service.

The coming heat could impact high elevation areas, which don’t usually see temperatures at those levels, according to the weather service.

To prepare for the heat, the weather service recommends hydrating, dressing appropriately and limiting time outdoors.

The forecast is for highs throughout Skagit County to reach between 82 and 89 degrees Tuesday, between 85 and 90 degrees Wednesday and 84 degrees Thursday, according to a weather service briefing.

If reached, Tuesday and Wednesday could mark the warmest days of the year, topping the previously warmest day of June 16, meteorologist Steve Reedy said.

While it is expected to be only about 2 degrees warmer than on June 16 based on Sedro-Woolley data, Reedy said the forecast is for a more extended stretch of heat than there was in mid-June.

The weather service similarly cautioned about the heat in mid-June and announced record-setting high temperatures in March.

Various analyses of long-term data have also shown that temperatures are on the rise and projected to continue setting record highs and reaching potentially dangerous levels of heat.