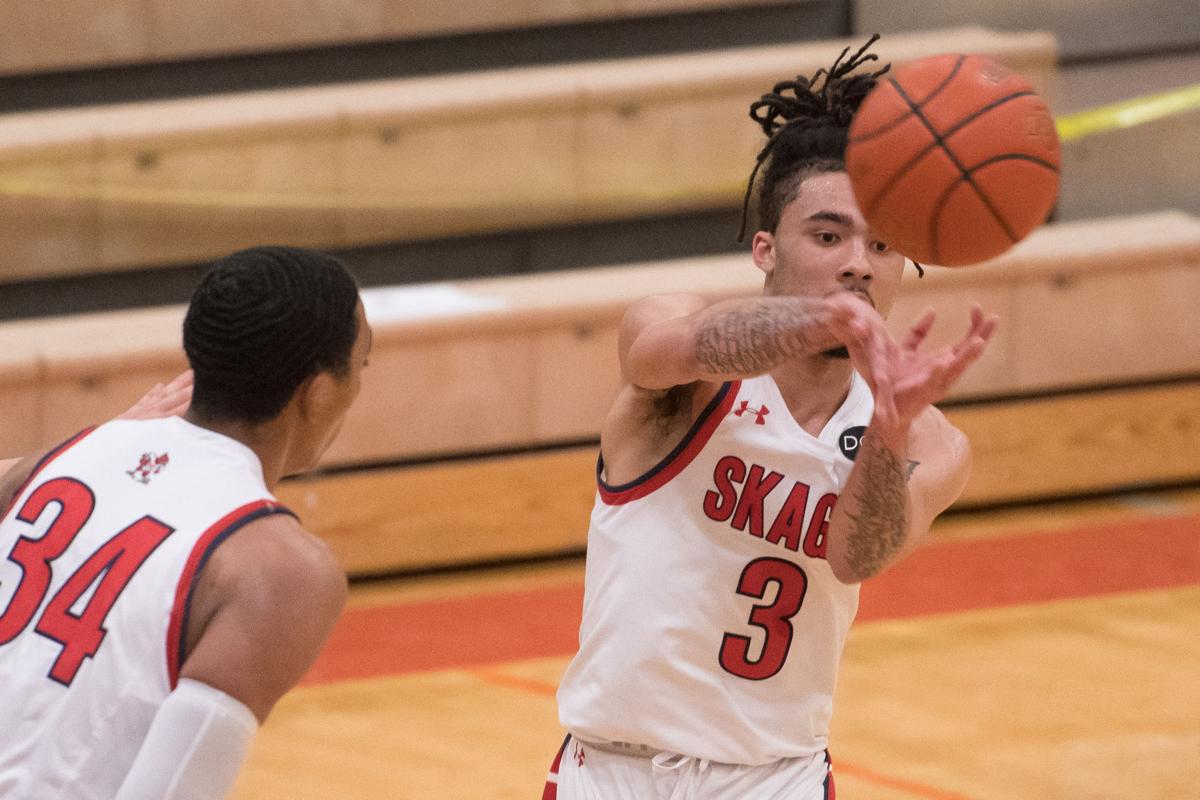 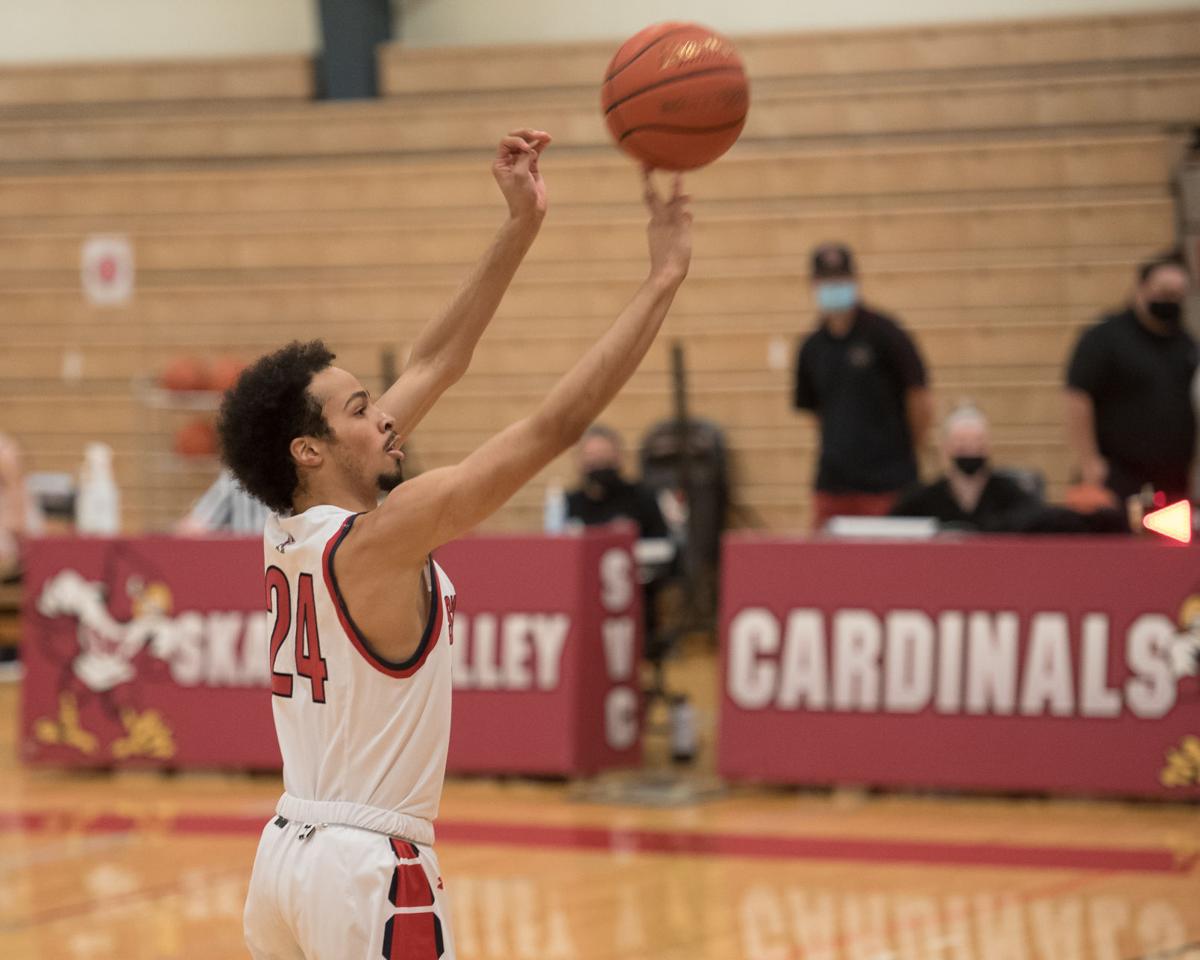 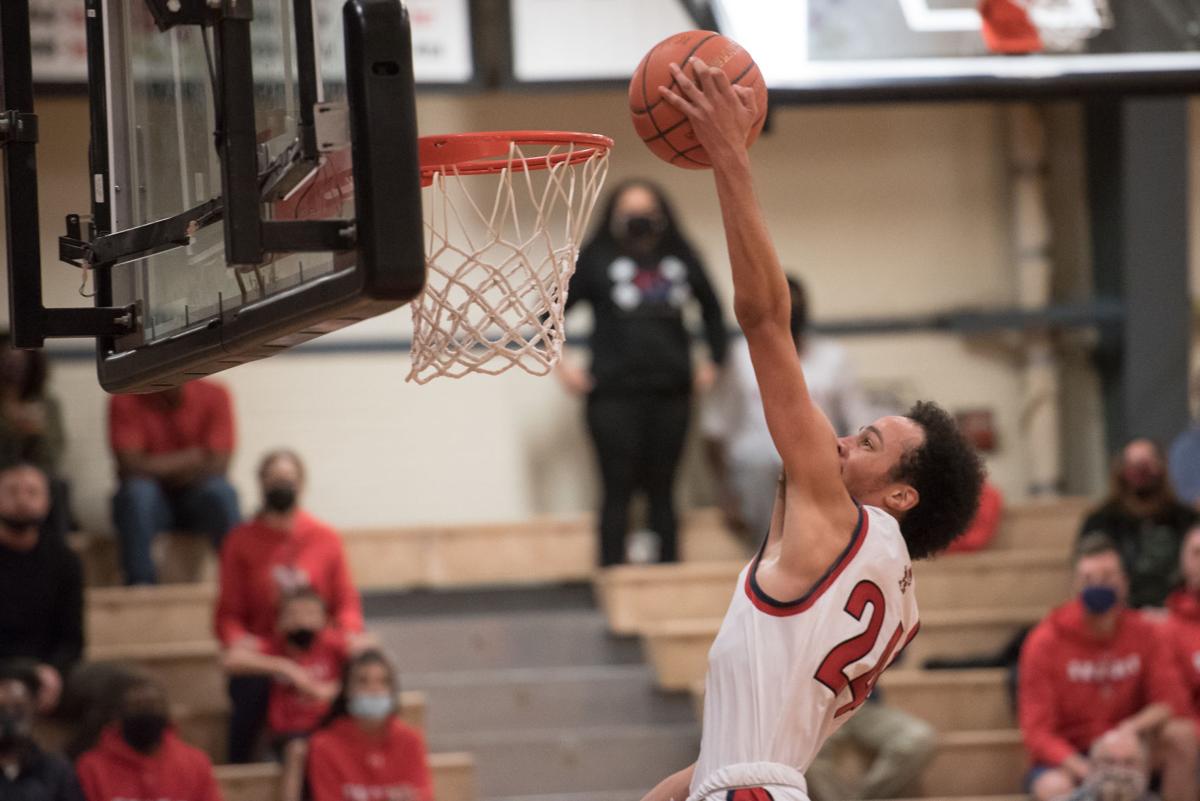 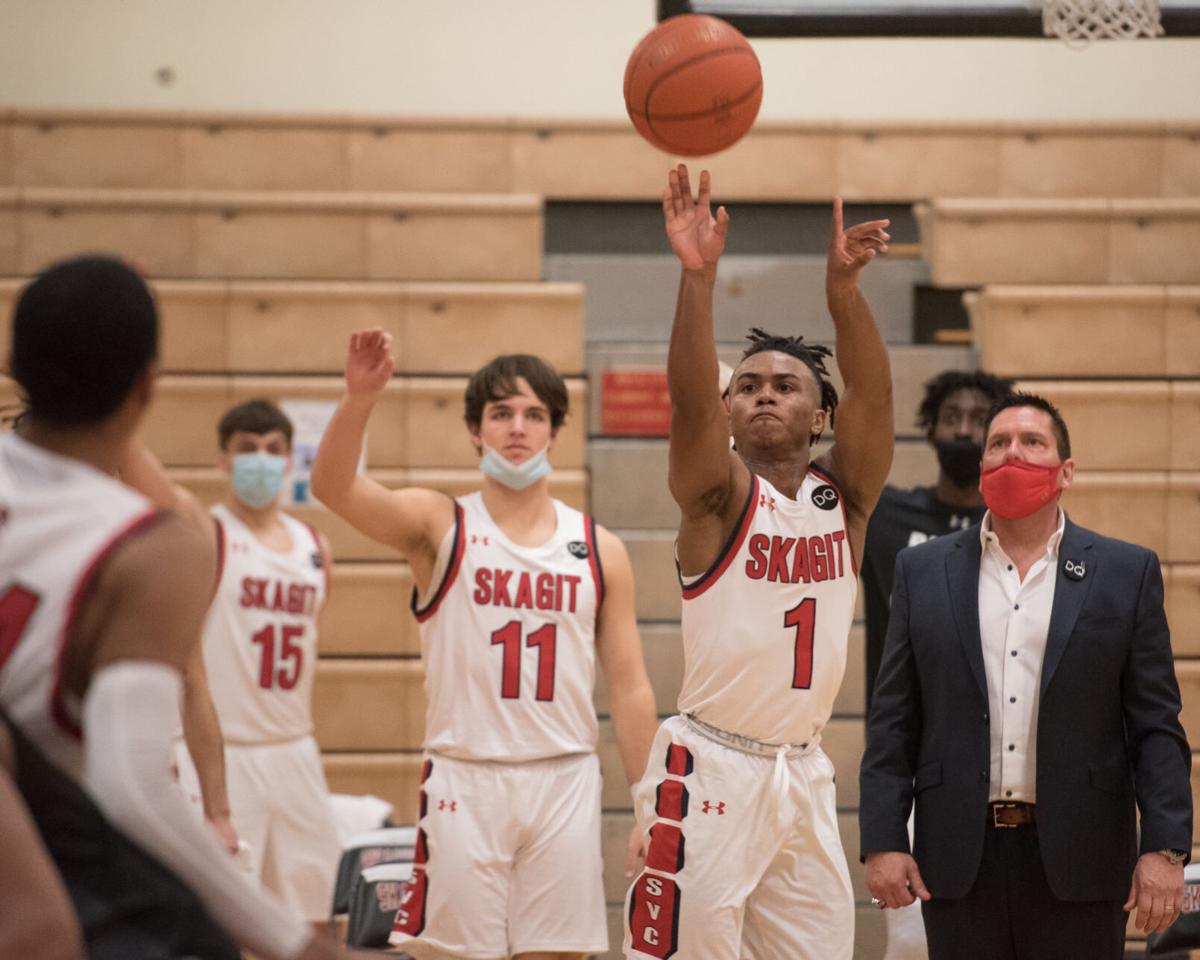 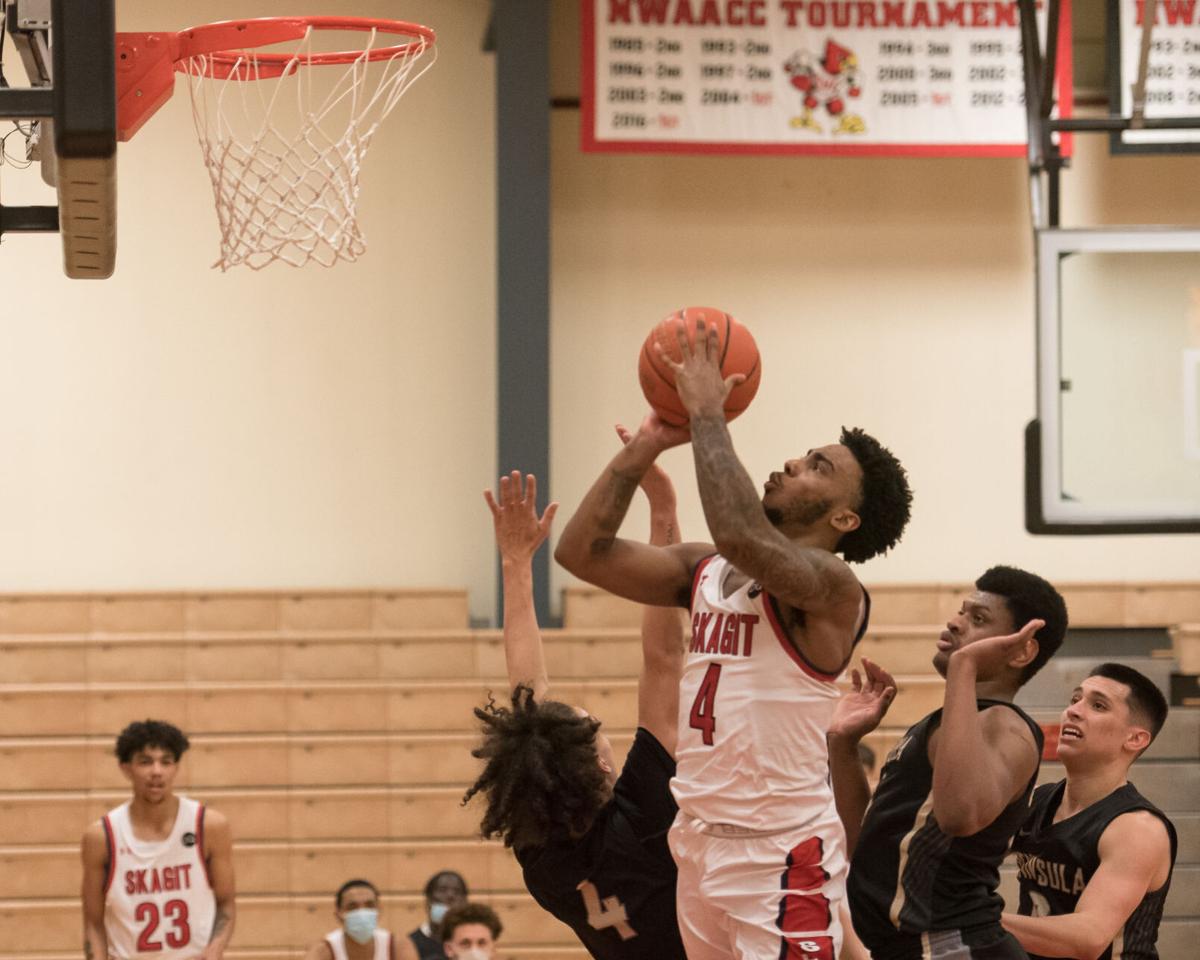 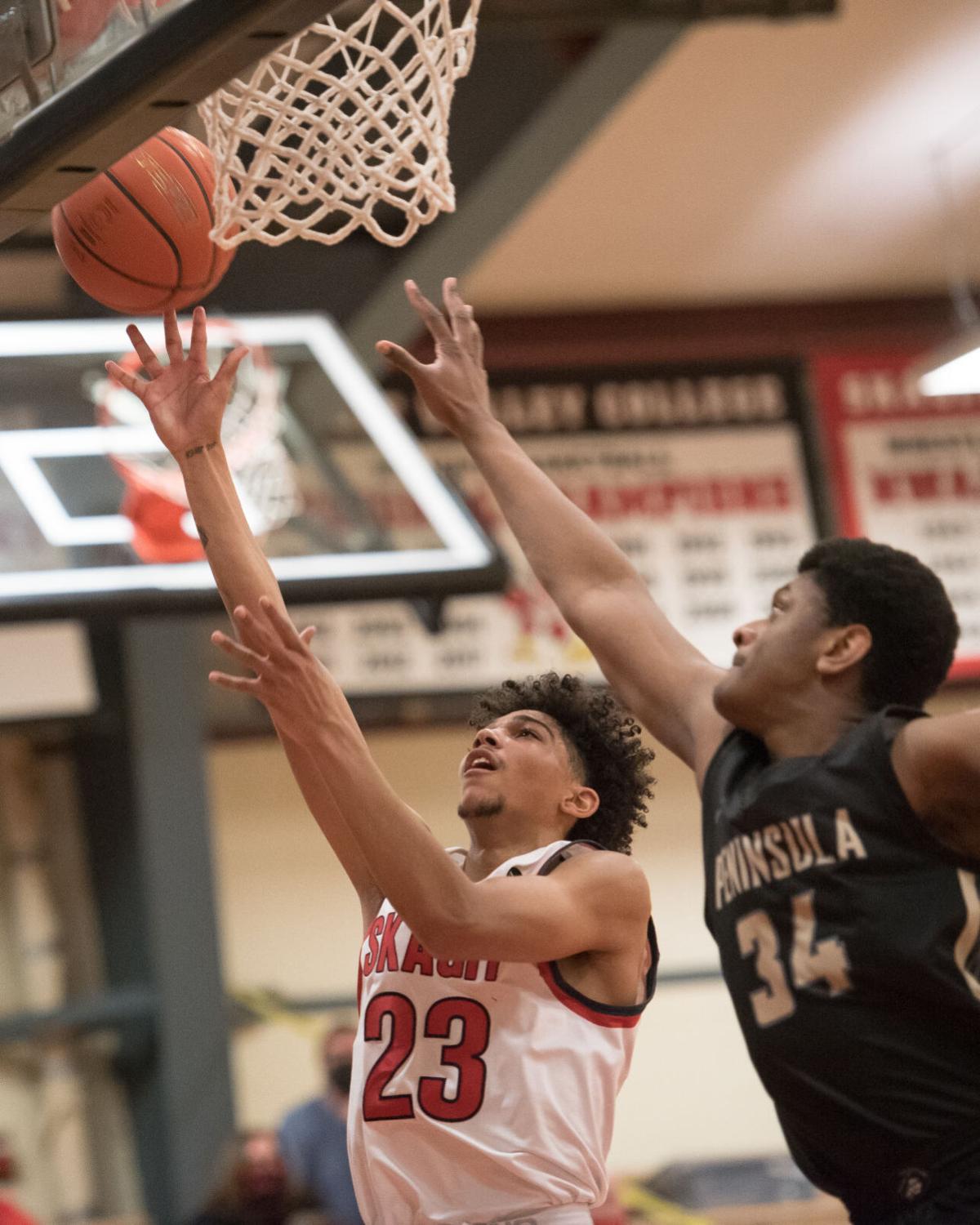 Skagit Valley's Demarcus Hall-Scriven goes for a layup against Peninsula on Wednesday in Mount Vernon. Skagit Valley won 71-68 in overtime. 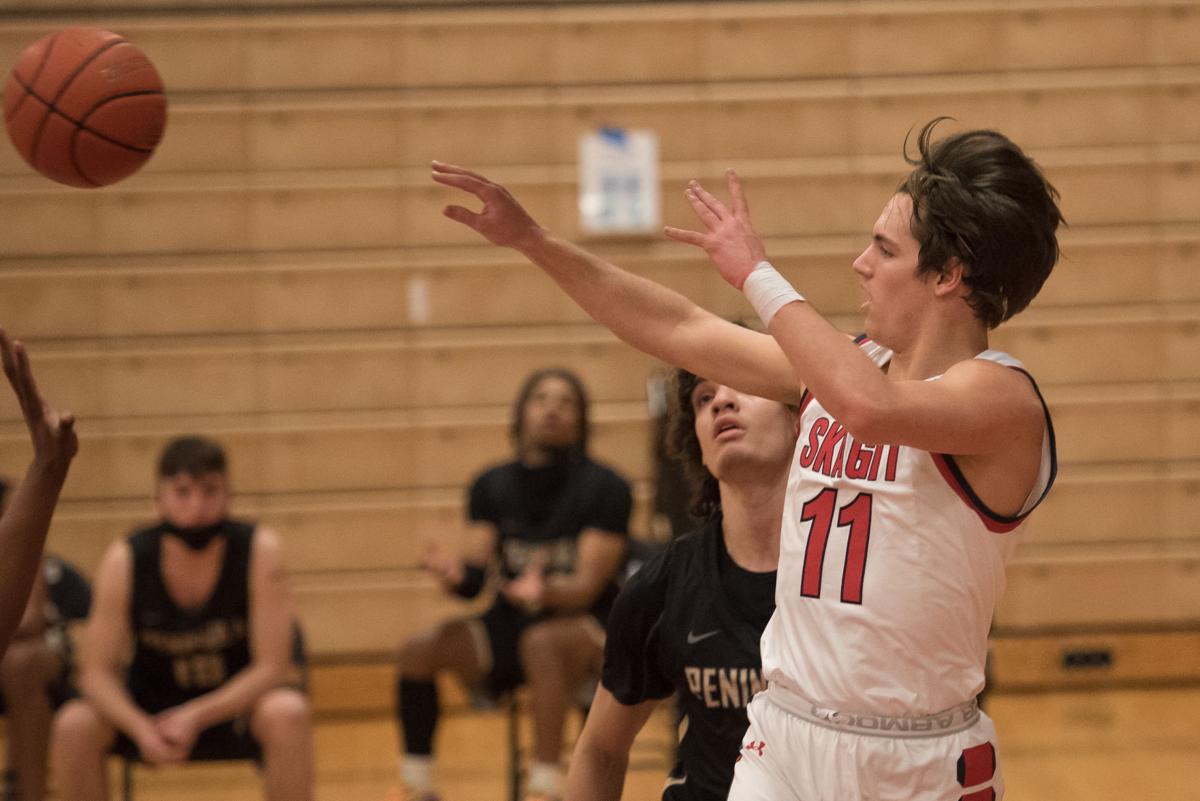 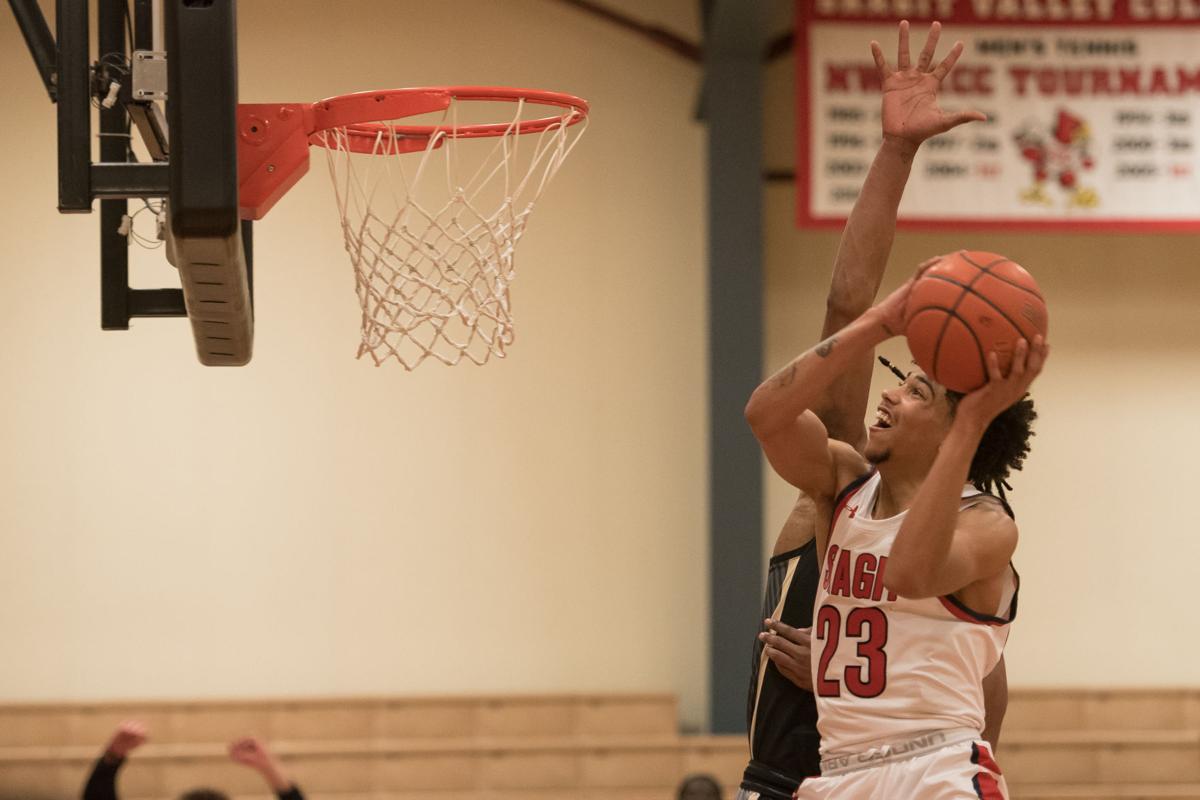 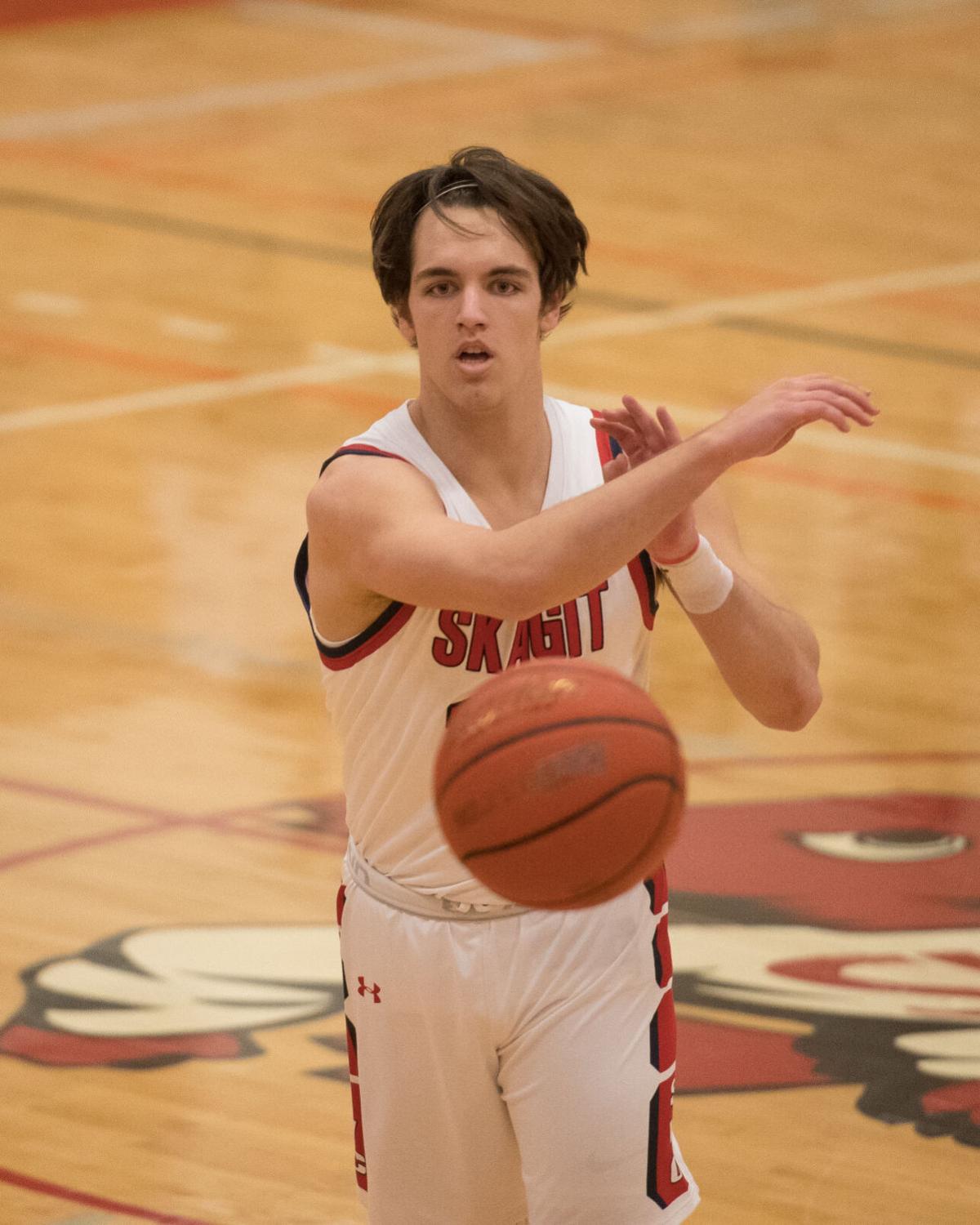 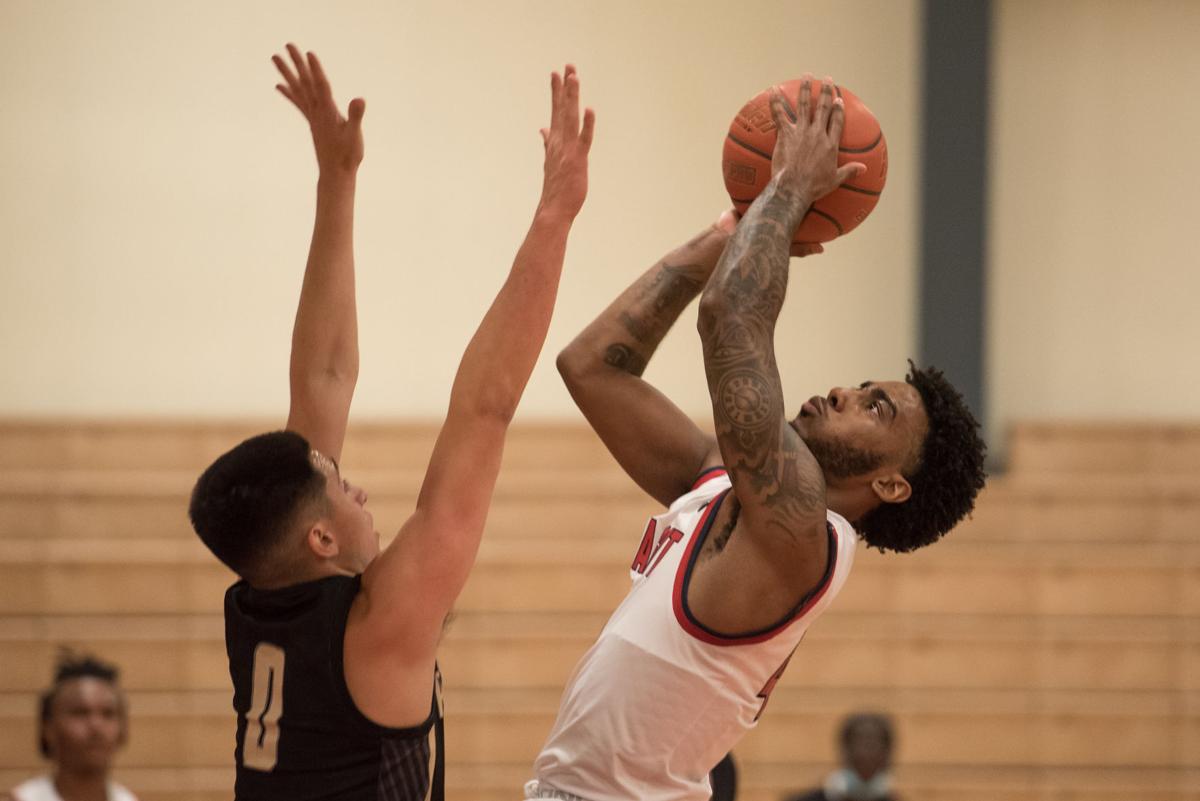 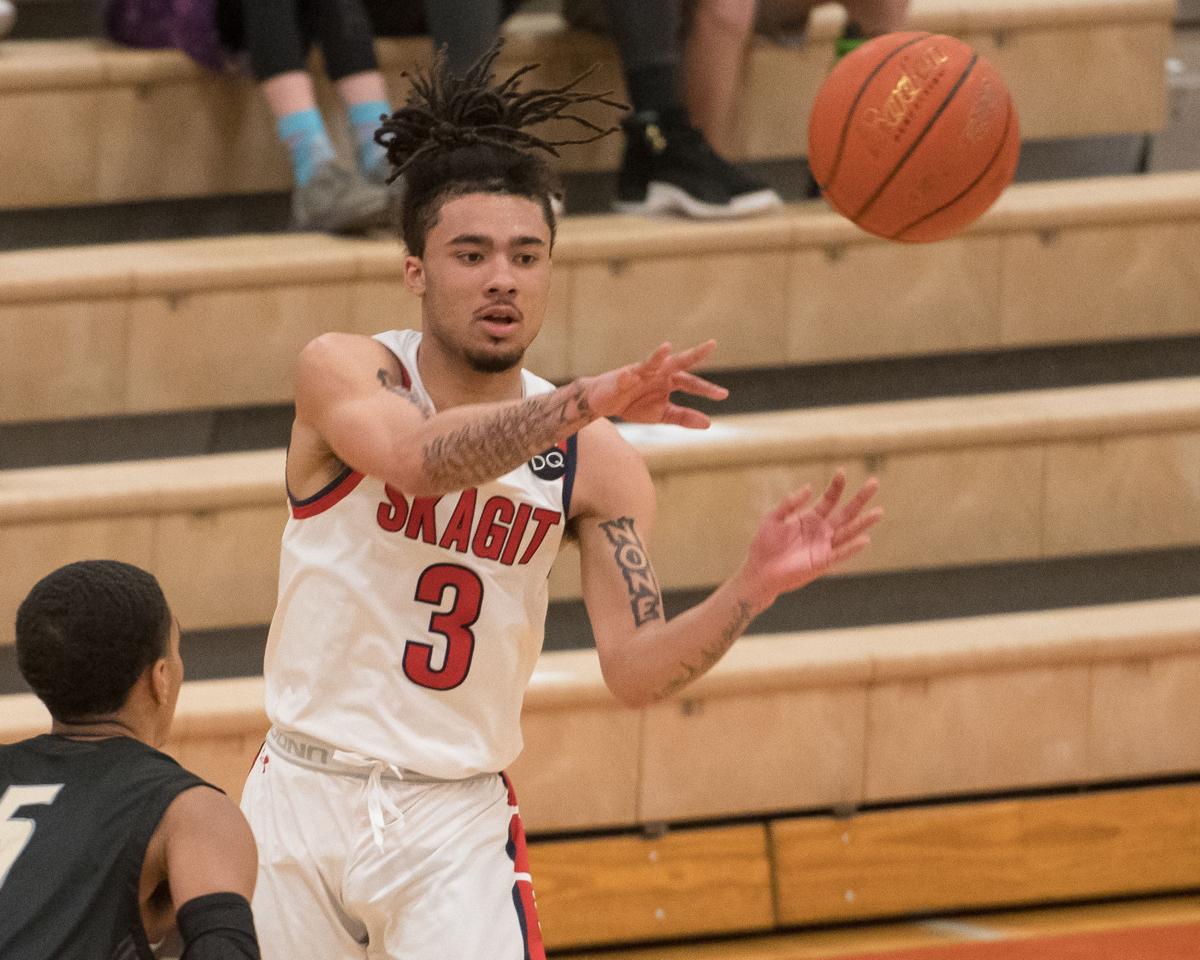 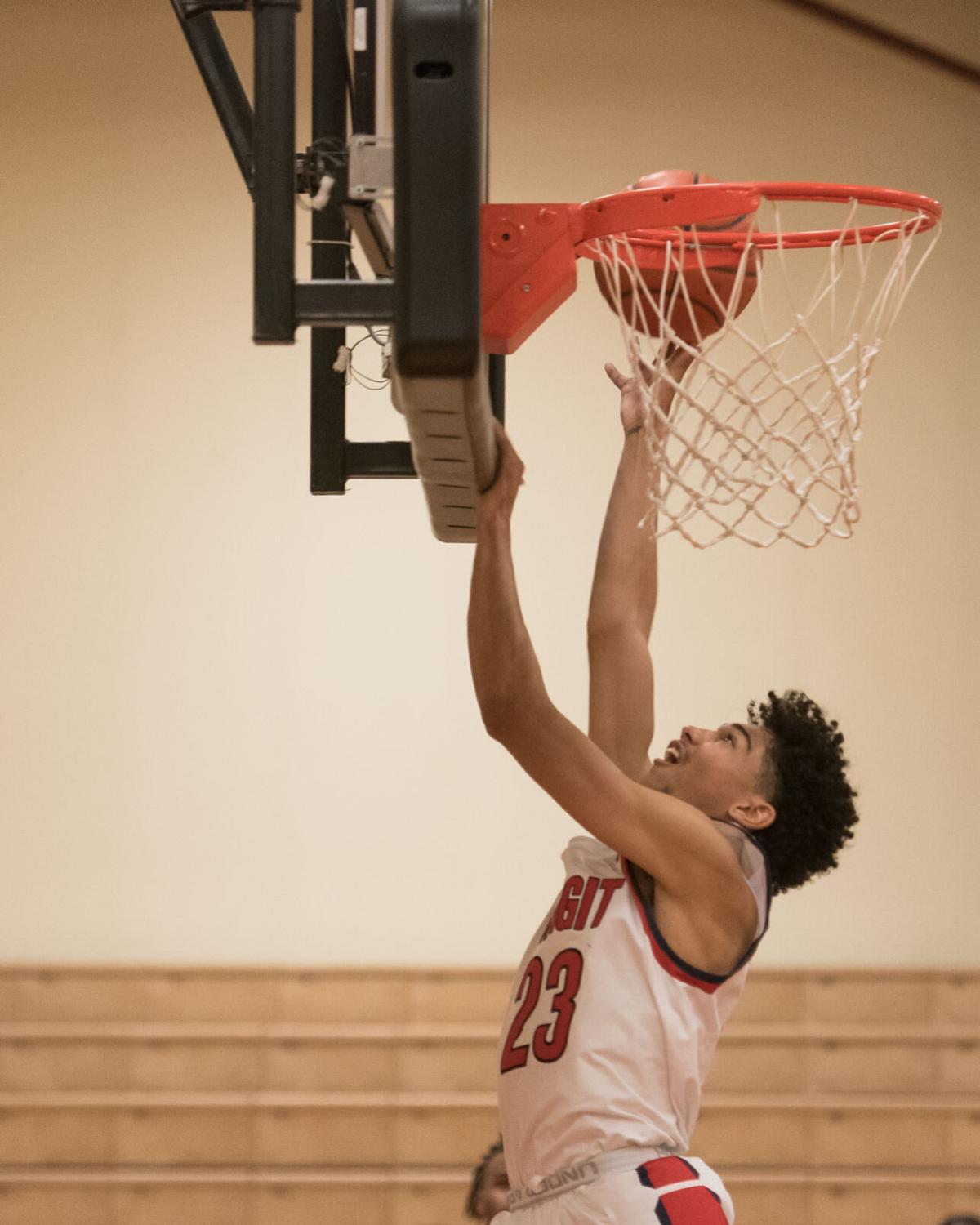 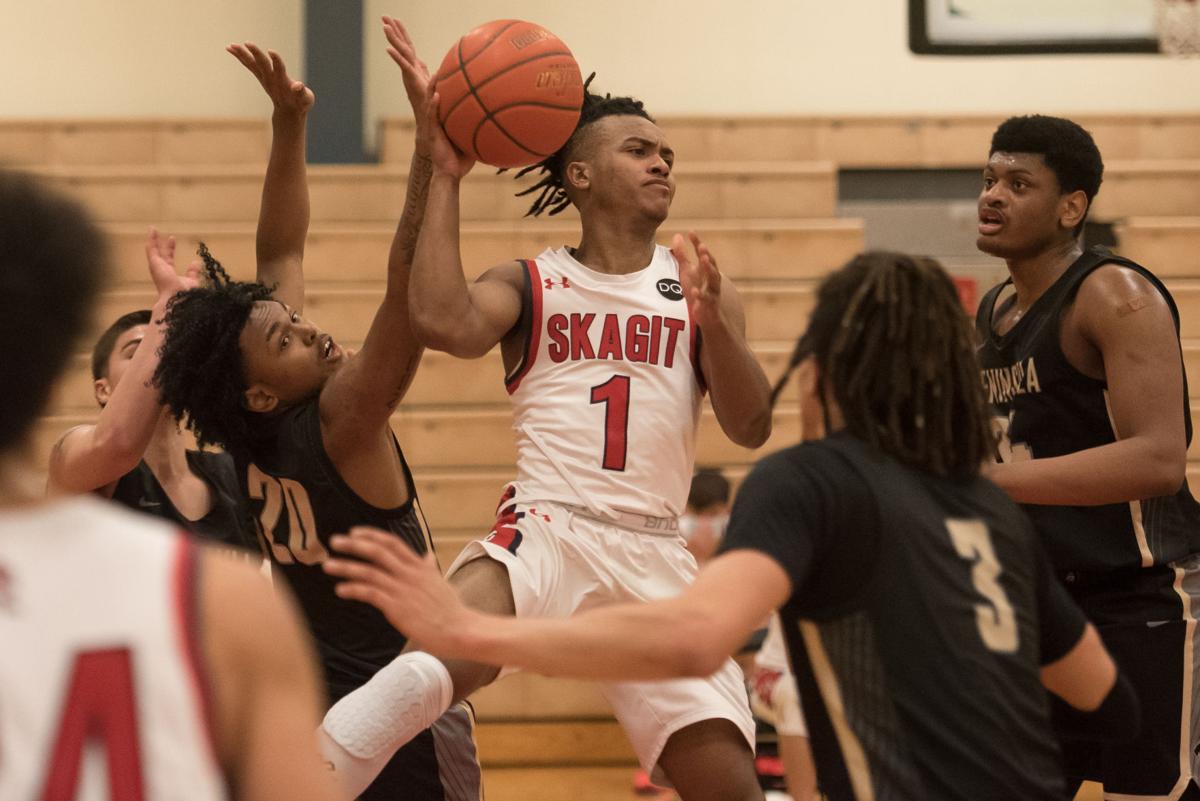 Skagit Valley's Demarcus Hall-Scriven goes for a layup against Peninsula on Wednesday in Mount Vernon. Skagit Valley won 71-68 in overtime.

DeMarcus Hall-Scriven scored 18 points, Anthony Iglesia scored 15 and Daniel Santana added 10 as the Cardinals got past Peninsula late Wednesday at home for a 71-68 overtime victory.

Hall-Scriven was 6-of-10 from the field, including three 3-pointers, and also grabbed a team-high seven rebounds. Iglesia went 8-for-9 from the free-throw line.

Neal Garcia and Jaylin Reed scored 17 points each for Peninsula.

Hall-Scriven gave the Cardinals what proved to be the go-ahead score with a free throw in overtime; Iglesia added four free throws late to help preserve the win.

"I am really proud of our guys tonight," Cardinals coach Carl Howell said. "With all these kids have went through with COVID it was just great to see them compete."

Howell added, "I thought our effort defensively was outstanding especially for our first game but, we struggled offensively and turned the ball over too much."

MOUNT VERNON — Melissa Frein helped the Cardinals to the season-opening win on their home court.

The Anacortes High School graduate scored 15 points and pulled down 15 rebounds, including six on the offensive end. The sophomore was 7-of-14 from the field and blocked two shots.

Cardinals coach Deb Castle said there were too many turnovers (19) and not enough free-throw attempts (six) but was pleased with the play in the paint and the advantage Skagit Valley had in rebounding.

She said she was thrilled to see this year's Cardinals squad on the court and competing hard.

"We are all thankful to be playing, all 12 girls played minutes, and all made some great plays," Castle said. "We have many things to work on, but that is why we needed to have a game to see where we are at. It is always good to beat Peninsula, as they are a very tough team."

Kailyn Allison had four steals for the Cardinals.

Skagit Valley College released guidelines Wednesday for spectators at games being played by its sports teams.

Indoor sports are restricted to family members of Skagit Valley College athletes or staff, and games have a limit of  150 pre-screened guests. Guests must check in and complete an online questionnaire, and are required to wear masks and follow social-distancing guidelines.

Outdoor sports are allowed up to 300 spectators. They, too, must fill out an online questionnaire and follow all guidelines.

Basketball, volleyball and soccer games will be streamed on YouTube.

More information is available at athletics.skagit.edu.