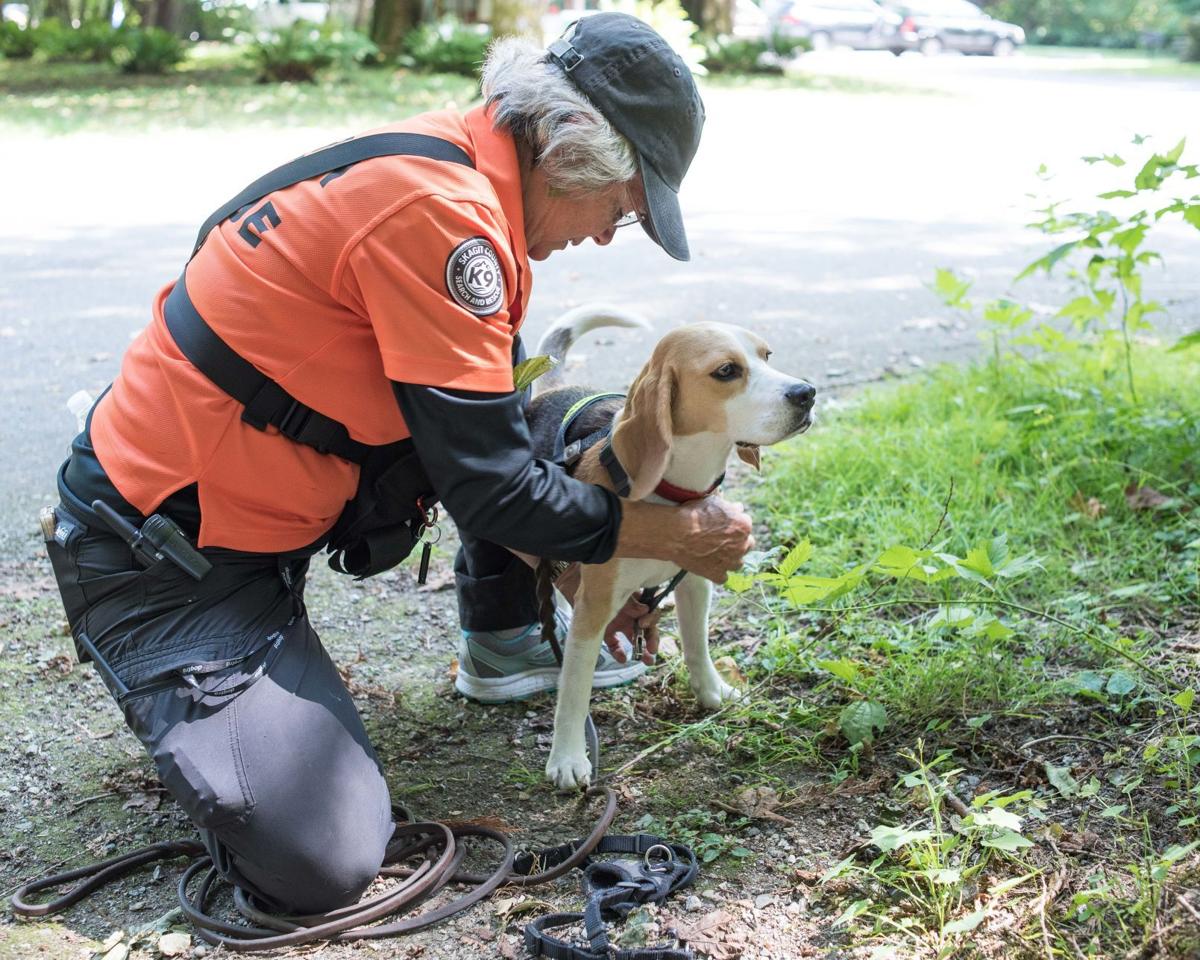 Patti Stormont, a Skagit County K9 Search and Rescue Team volunteer, puts a harness on her beagle Daisy before a trailing exercise in June 2019 at Rasar State Park. 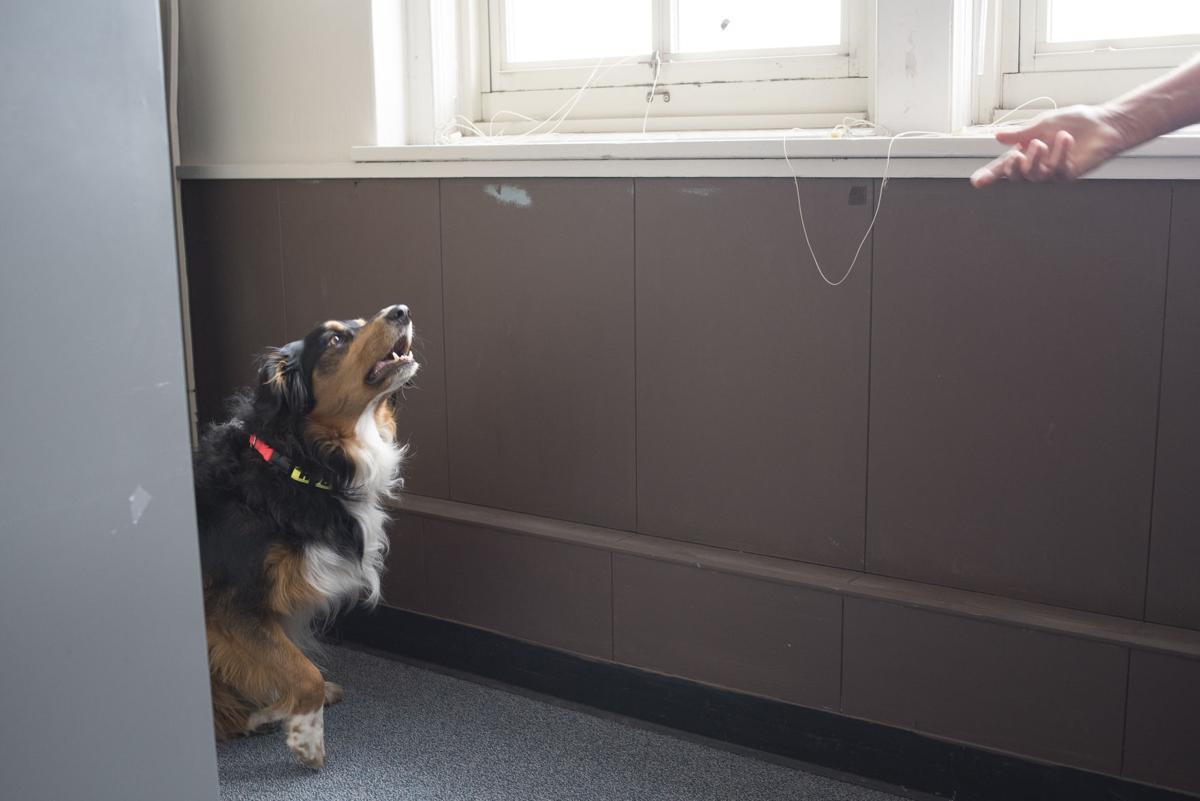 BellaRose, a dog trained by Skagit County K9 Search and Rescue Team leader Angelyn Gates, prepares to catch a treat in her mouth during a human remains detection exercise in July 2019 at Sedro-Woolley High School. 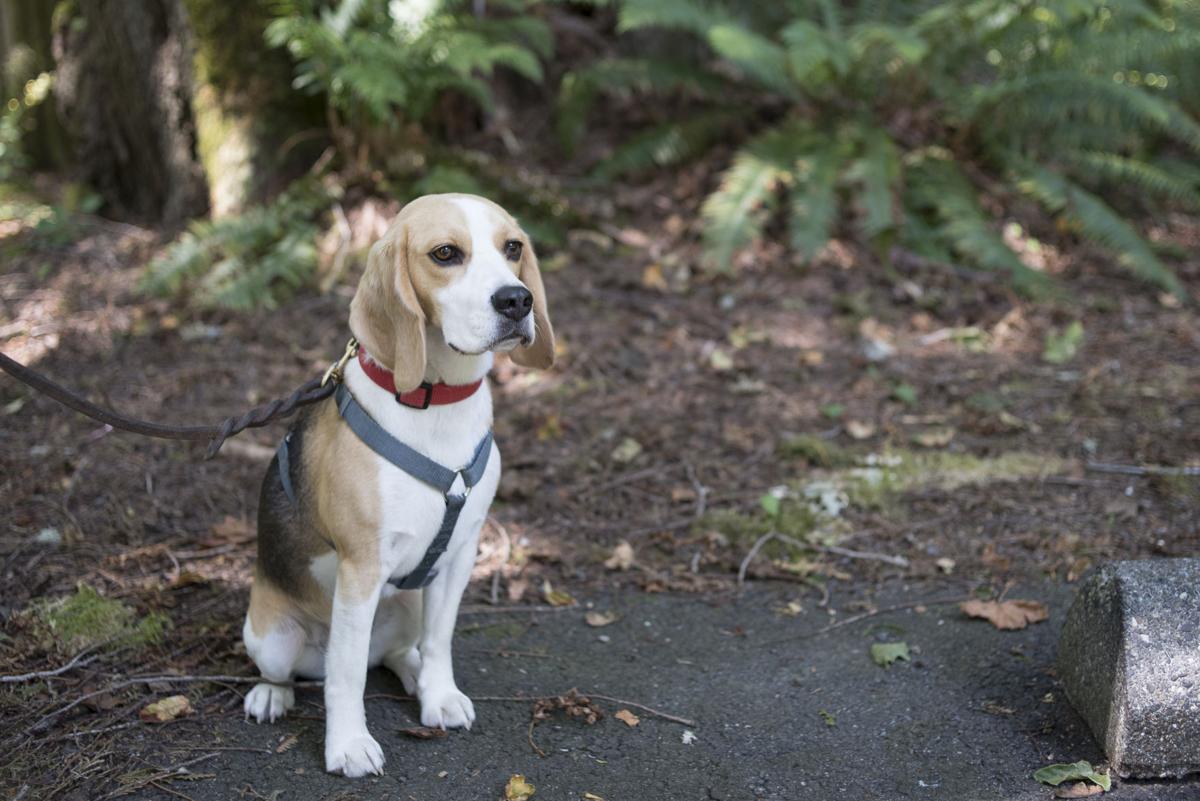 Patti Stormont, a Skagit County K9 Search and Rescue Team volunteer, puts a harness on her beagle Daisy before a trailing exercise in June 2019 at Rasar State Park.

BellaRose, a dog trained by Skagit County K9 Search and Rescue Team leader Angelyn Gates, prepares to catch a treat in her mouth during a human remains detection exercise in July 2019 at Sedro-Woolley High School.

The day BellaRose and Daisy have trained most of their lives for has finally arrived — the day they can officially use their noses to help agencies such as the Skagit County Sheriff’s Office.

After more than two years of official training, the beagle and the English shepherd have been certified as search and rescue dogs.

“They are dialed in,” said Patti Stormont, Daisy’s owner and member of the Skagit County K9 Search and Rescue Team.

Both dogs are certified in trailing, meaning they have been taught to track a person’s scent, Stormont said.

“Our dogs scent a certain person’s odor and only that odor,” Stormont said. “They can go through a crowd of people and stay on that odor.”

BellaRose and Daisy are the first dogs in the past several years to be part of the Skagit County Sheriff’s Office Search and Rescue Team, Gates said.

While Gates, Stormont, BellaRose and Daisy are volunteers on the team, state law requires all search and rescue teams to operate under the supervision of a local sheriff’s office.

While the Sheriff’s Office does have a K-9 unit, the unit’s dog — Espo — is not trained for search and rescue or human remains detection, Clark said.

Having a dog that is trained in such areas can be beneficial for search and rescue teams, especially because it can give searchers an idea of where to quickly deploy other resources such as drone units.

“It could be an immediate help,” Clark said.

BellaRose and Daisy can also be used by departments other than the Skagit County Sheriff’s Office.

Although the dogs have completed their certifications, their work is far from over, Gates said.

Gates and Stormont continue to train their dogs two times a week — no matter the weather.

The team is still looking for volunteers to go “missing” in order to help the dogs hone their skills.

Gates and Stormont said helping the dogs train can be as simple as volunteering to go for a walk or to a friend’s house while one of the dogs tracks their scent.

“We have people that go missing from their homes,” Gates said.

Gates and Stormont are hoping to add to their team new volunteers, even ones who don’t have dogs such as BellaRose and Daisy, Gates said.

That could be by volunteering to get lost, or by joining the field team when the dogs are deployed, she said.