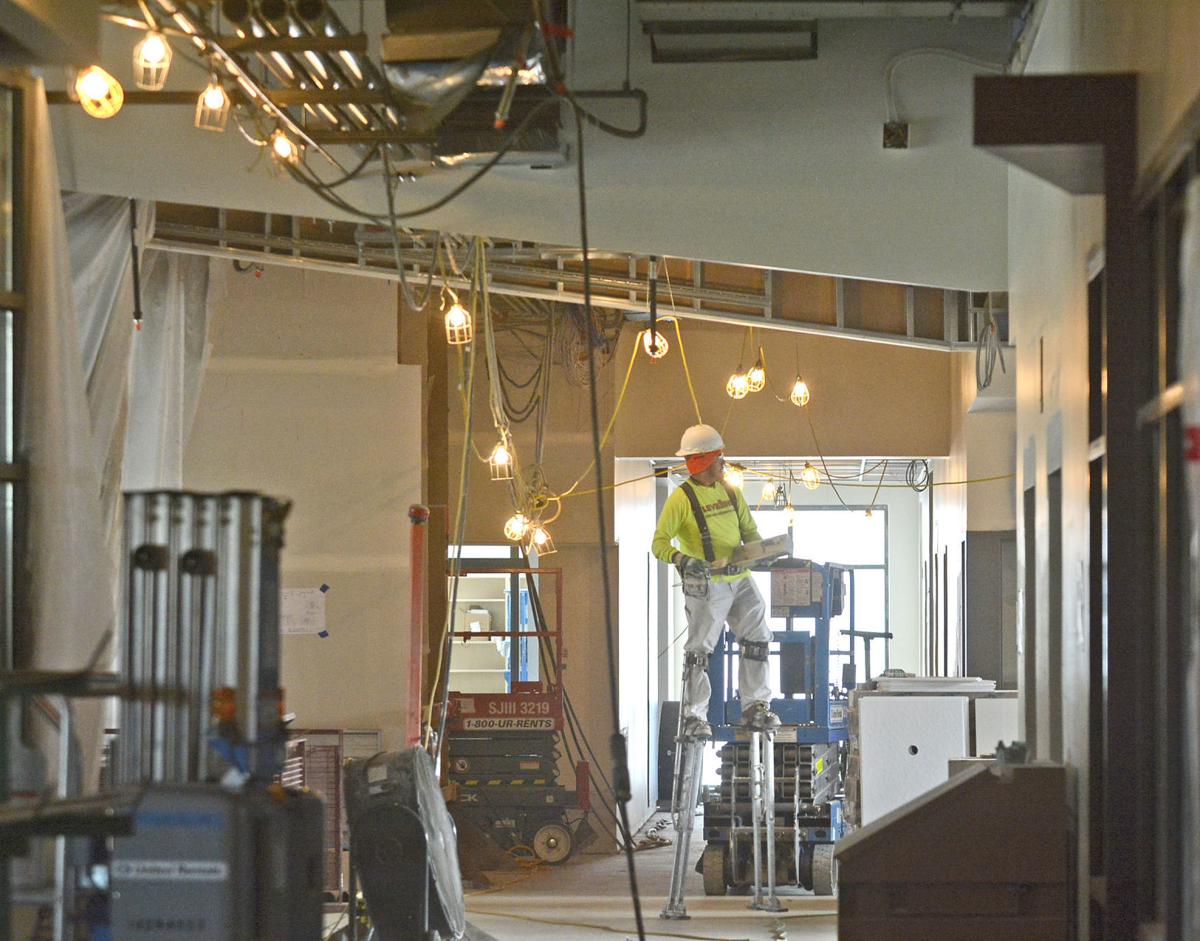 Work continues Thursday on the new Anacortes High School as a drywall finisher works in the upper level hallway. 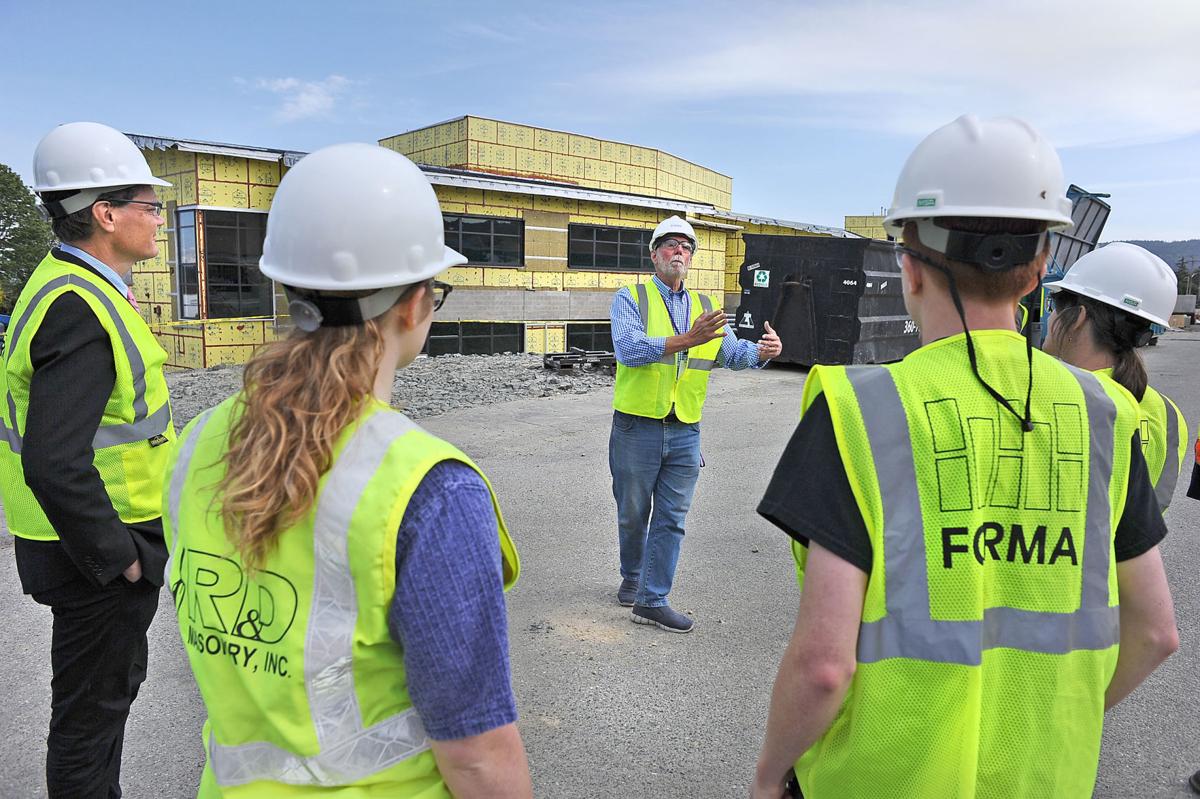 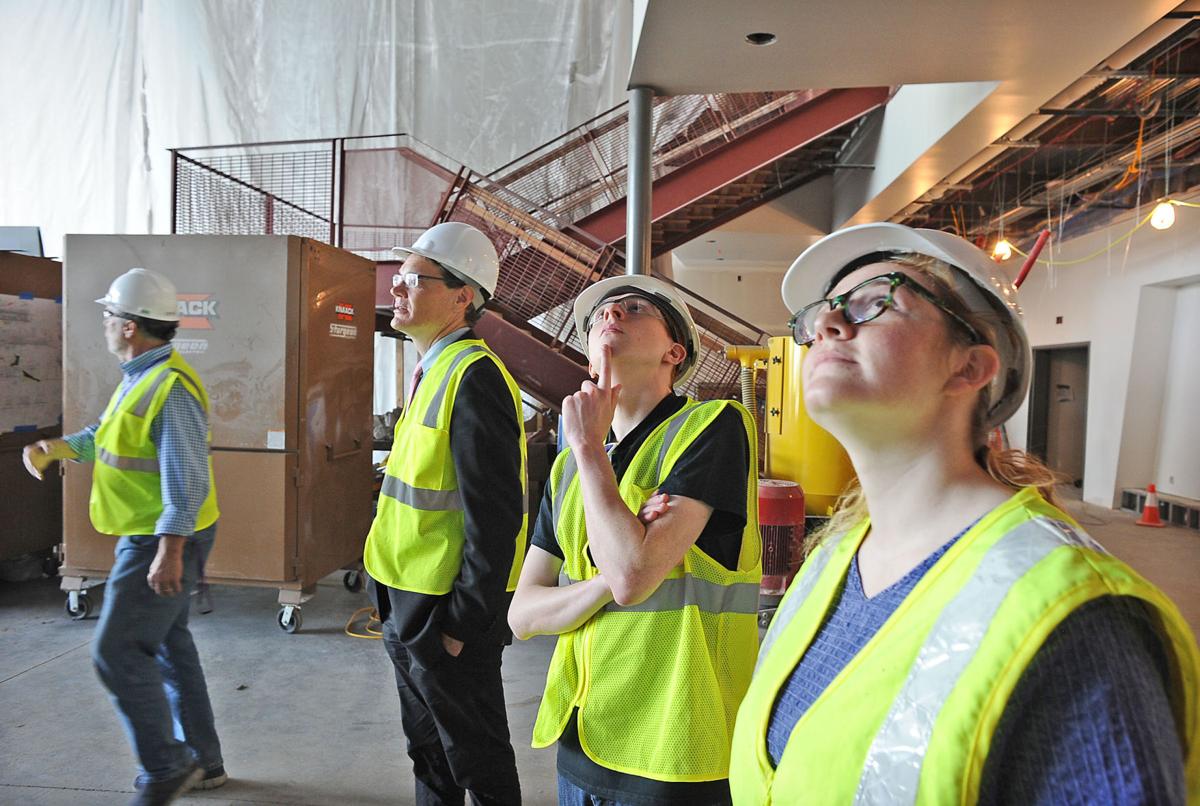 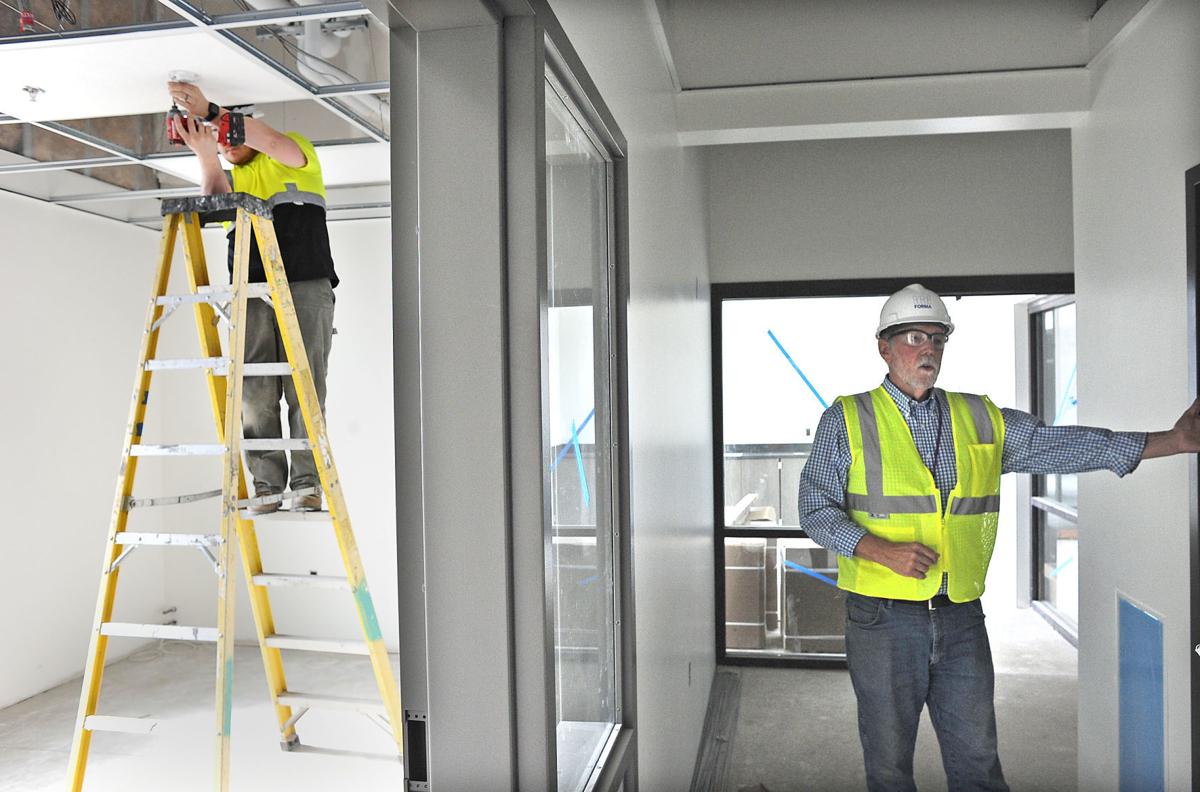 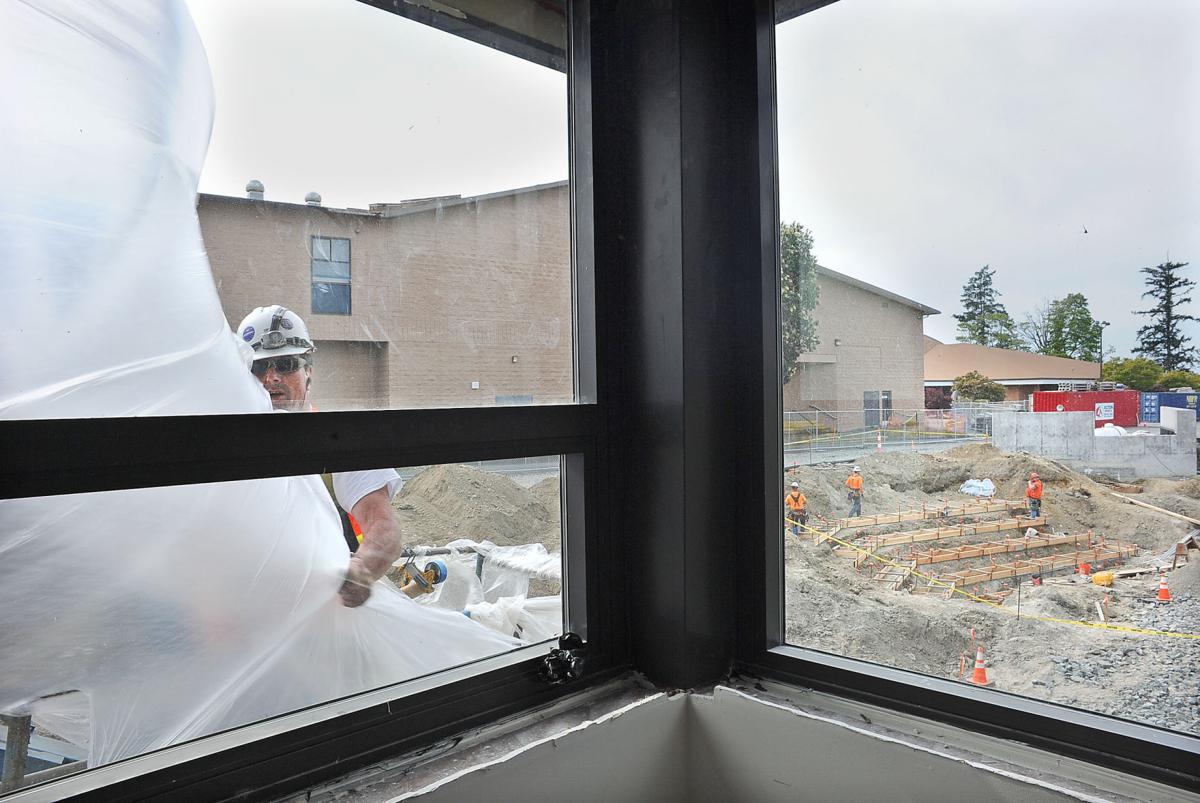 A worker pulls protective plastic sheeting from a window at the new high school Thursday afternoon as workers (right) work on an outdoor amphitheater. 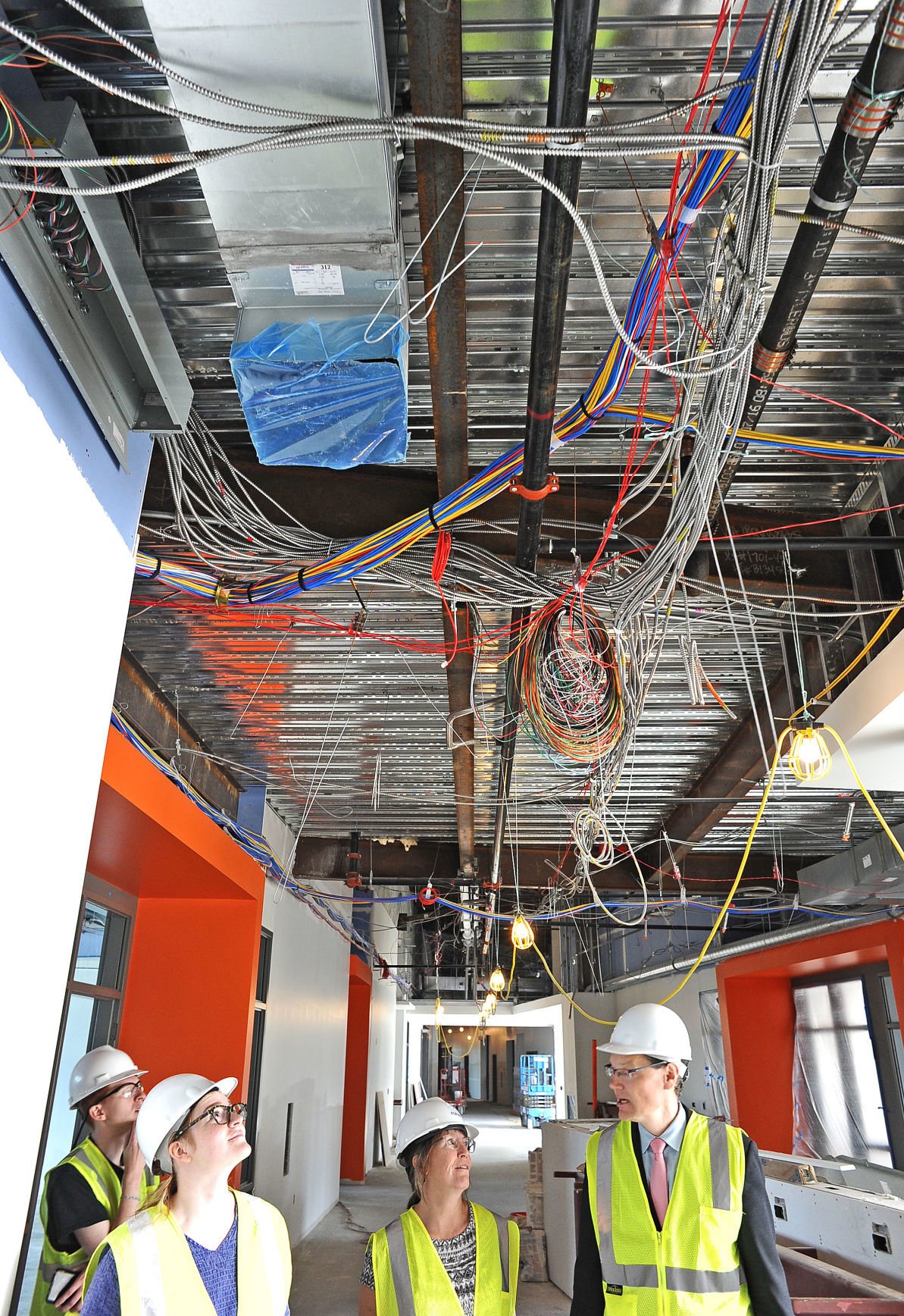 Work continues Thursday on the new Anacortes High School as a drywall finisher works in the upper level hallway.

A worker pulls protective plastic sheeting from a window at the new high school Thursday afternoon as workers (right) work on an outdoor amphitheater.

ANACORTES — When Anacortes High School students return to school in the fall, they’ll be entering a building filled with natural light, modern equipment and more space.

As Knorr led Anacortes School Board members on a tour of the new high school Thursday, he reflected on the building in which his career in the school district began in 1973.

“It’s been this way for 40 years,” Knorr said as the tour wound its way through the old building.

Construction on the district’s $90 million high school project is well underway, with the new building set to open Sept. 6 for the first day of school.

Although plastic still covers many of the windows and areas of the construction zone, the building is already drawing awe.

“It’s beautiful,” senior and student school board member Michael Mantell said. “We’re so fortunate to have this.”

Throughout the building, large windows and high ceilings allow in plenty of light. On sunny days, a teacher could theoretically not even turn on the lights, Knorr said.

Instead of being cramped and poorly lit as the current school’s hallways are now, the hallways in the new school will be large enough to allow small groups of students to work outside the classroom.

“That’ll be a challenge for our teachers to learn to use,” Knorr said. “But it’s a magnificent opportunity.”

Scattered throughout the building are new tables where students can plug in their laptops.

“Every single day our students get to enjoy that,” board member Erin Rieger said.

With that openness also comes security, Knorr said. From one end of the building to the other, there are no right angles to block a line of sight. The current building has more than two dozen right angles.

Every aspect of the school has been designed with the community in mind, Knorr said, even down to the color scheme.

“I feel like I’m in ‘High School Musical,’” said student school board member and junior Alyssa Watson. “It’s so open and big and you just feel like the world is in your hands.”

When the project is complete, a skybridge will connect the new three-story classroom building to the heavily renovated one-story career and technical education building, which also houses Brodniak Hall. A pedestrian-only plaza will be located below the bridge.

“It all ties together in this plaza,” Knorr said.

Also featured outside will be an amphitheater.

After so many months of staring at blueprints and schematics, Rieger said it was incredible to finally see the building come together.

“It’s built to last,” Rieger said. “This is an investment.”

The last day of school in Anacortes is June 14, with demolition of the current high school building set to begin June 25. After that, renovation of the future career and technical education building will begin.