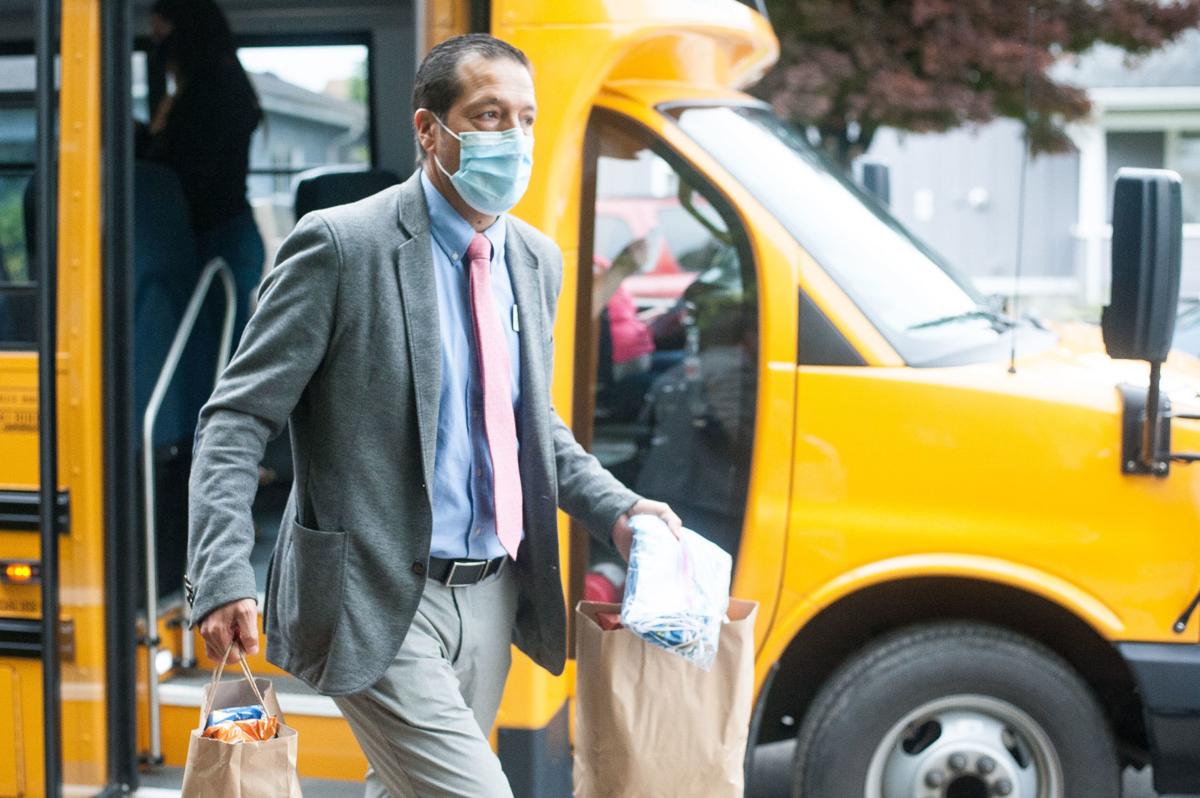 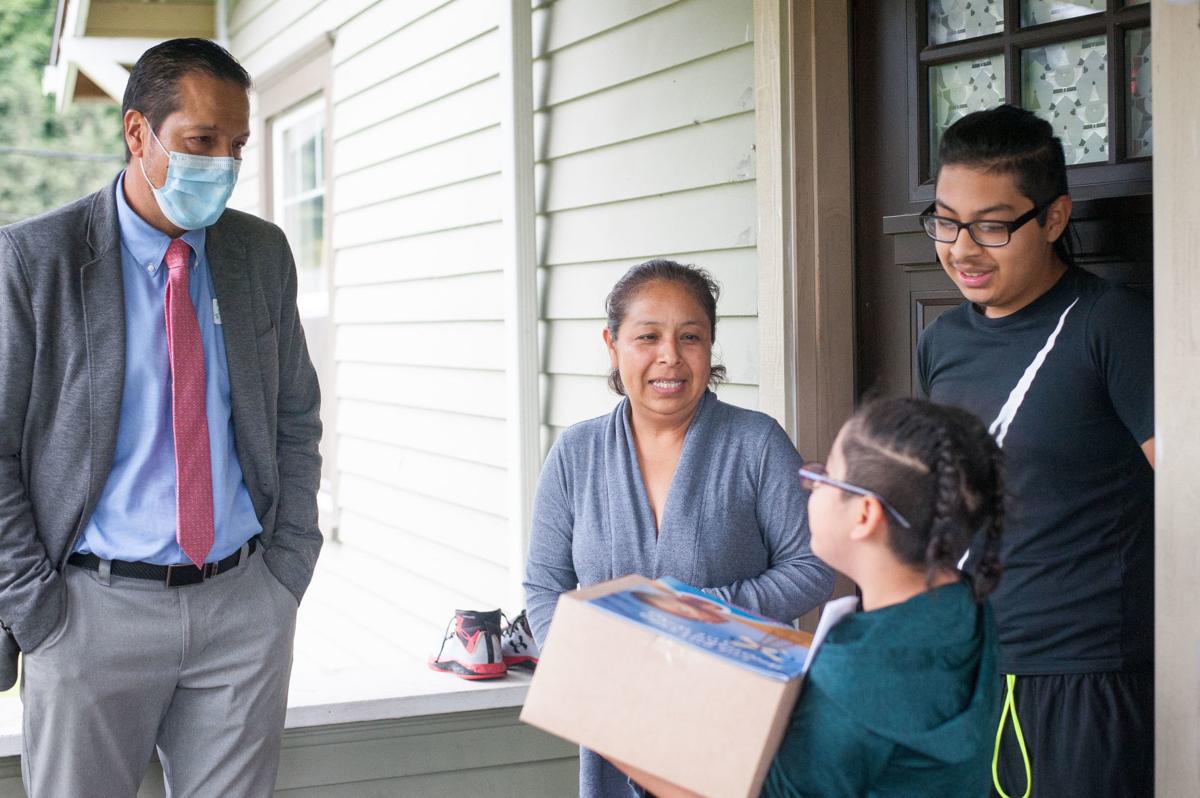 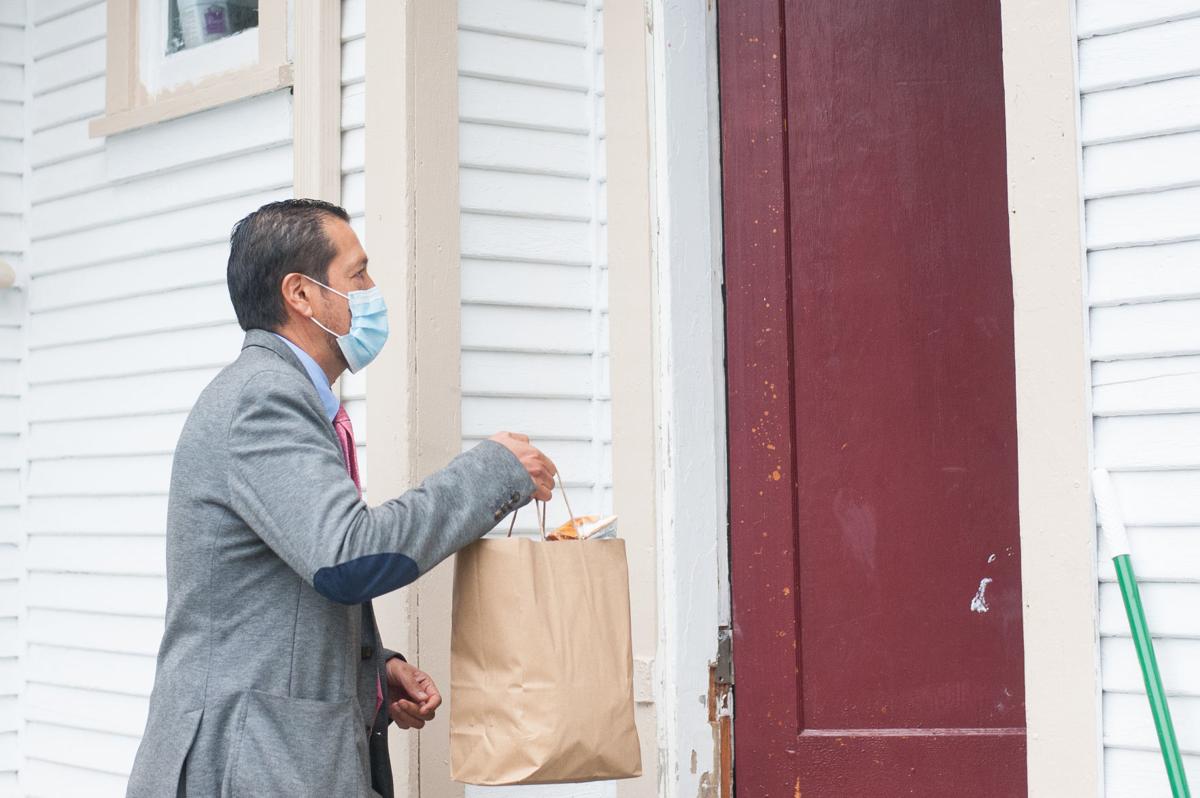 Mount Vernon School District Superintendent Ismael Vivanco delivers food and school work to students in the district’s summer migrant program on July 2 in Mount Vernon. Vivanco also handed out masks, used to help prevent the spread of COVID-19, to families who did not have any.

Mount Vernon School District Superintendent Ismael Vivanco delivers food and school work to students in the district’s summer migrant program on July 2 in Mount Vernon. Vivanco also handed out masks, used to help prevent the spread of COVID-19, to families who did not have any.

MOUNT VERNON — On his second day of work late last week, Ismael Vivanco could have been behind his desk settling in, but instead the new Mount Vernon School District superintendent spent much his Thursday on a school bus going door-to-door to students’ homes, handing out bags of food, boxes of school work and handmade masks to help fight the spread of COVID-19.

“I like to talk to them,” he said. “It’s all about relationships.”

For Vivanco, who comes to the district from the combined 230-student Orondo and Palisades school districts east of the Cascades, the bus ride through the Mount Vernon neighborhoods wasn’t an entirely new experience. The Burlington-Edison High School graduate passed by places he remembered as a kid, including the church where he used to be an altar boy.

While some things may not have changed, others undoubtedly have, so Vivanco said his goal for the first 90 days in the district is to get reacquainted with the community he grew up in.

It’s a process he’s been at since he was hired in early March, he said. Since then, he has attended weekly meetings with district and school leadership — mostly via Zoom because of the COVID-19 pandemic — to find ways to take the district forward.

“We’re going to continue to go with our strategic plan,” he said.

That includes continuing to enact the social justice and racial equity plan approved by the board in May.

The district’s commitment to serving all of its students, especially those who face adversity because of their backgrounds, is something that drew Vivanco to Mount Vernon, he said.

“I think that speaks volumes to not just say it, but to do something about it,” he said. “Now it’s time to put some of those words into action.”

As a former migrant student in the Skagit Valley himself, Vivanco understands some of those struggles.

“I’ve lived it,” Vivanco said. “Next to the homeless, they’re the ones who have the most challenges. What is it we can do to alleviate those barriers?”

Growing up with parents who worked in the fields, he realized that education was a way to provide himself with opportunity. That’s why he chose a profession in education.

“This is a profession that will allow me to give back,” he said. “I see how my life has changed because of going to school and how it improved my quality of life. That’s what I want for all of our students.”

After he knocked at each door on Thursday, Vivanco, in Spanish, introduced himself to families.

“This is the most important thing, getting to meet our students and families,” he said.

Immediately, Vivanco’s tenure will face some challenges, namely in leading the district as it prepares to re-open schools to students in the fall.

“There’s no question we all want to have kids back in school,” Vivanco said. “We really have to proceed cautiously.”

Already though, he said he has an advantage — the district’s staff who have already been hard at work.

It’s one of the first things that stuck out to him as he began learning about the district, he said.

“The commitment and the passion the staff have to meet the needs,” Vivanco said.