A grizzly bear and a cub forage along the Gibbon River in Yellowstone National Park in this USGS photo provided to the Associated Press. While some would like to see more of the bears in the North Cascades, the federal government announced Tuesday it canceled the development of recovery plans for the region. 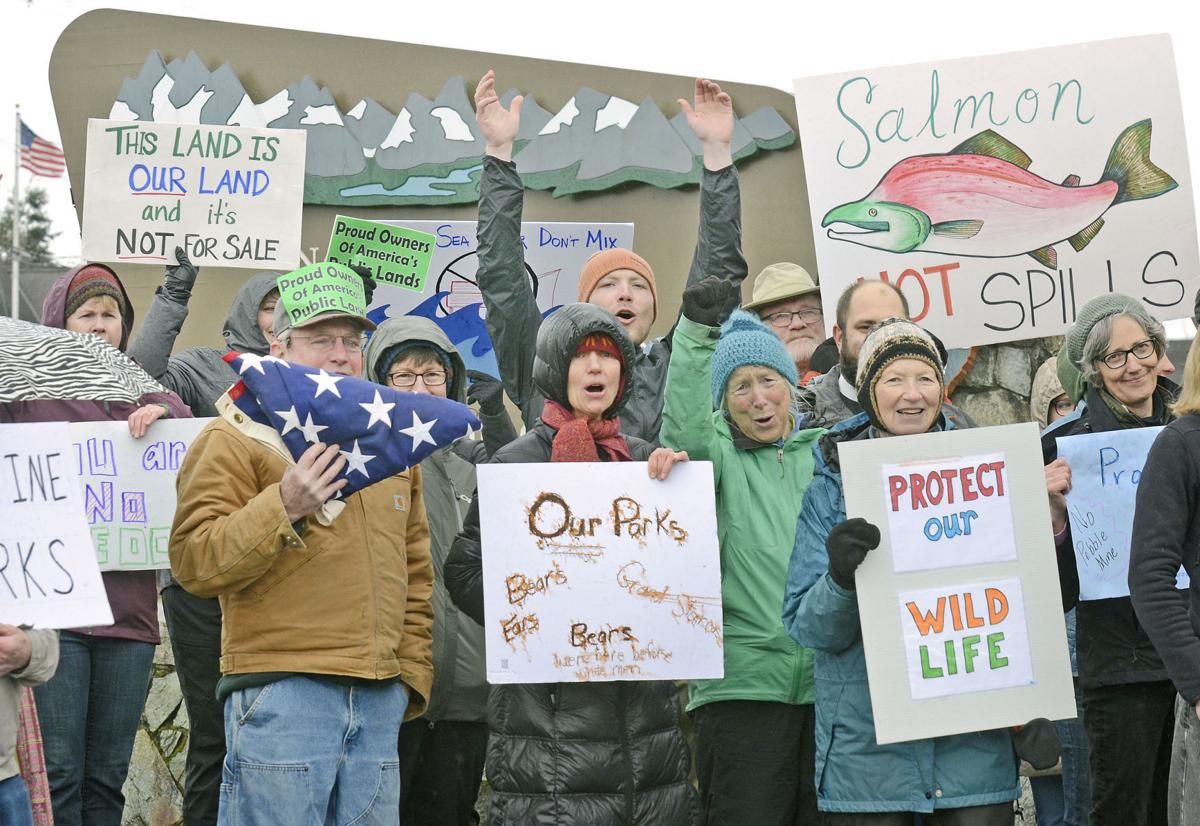 Dozens of protestors who assembled in the parking lot of the North Cascades National Park Service Complex Headquarters in Sedro-Woolley in March 2018 cheer at the news of former U.S. Secretary of the Interior Ryan Zinke’s support for restoring grizzly bears in the North Cascades. Residents of Skagit County and surrounding areas have shared a variety of views on the idea of restoring the species here.

The federal government announced Tuesday that in light of local concerns about public safety, plans to restore a greater grizzly bear population in the North Cascades have been scrapped.

After years of research, planning and public involvement, the U.S. Department of the Interior canceled development of an environmental impact statement, or EIS, for regional grizzly bear restoration.

The cancellation comes after about two years of silence about the plans following a March 2018 visit from former U.S. Secretary of the Interior Ryan Zinke to Sedro-Woolley. Although the EIS process was already delayed without clear explanation, Zinke had announced support for restoring the “great bear” so iconic to America’s wild places.

Following that visit and Zinke’s subsequent departure from the Interior Department, the fate of potential grizzly bear restoration plans became unclear. None of the federal agencies involved would say whether the EIS process would continue.

A year ago, the public comment period reopened on the draft EIS released in January 2017.

Current Secretary of the Interior David Bernhardt released a statement Tuesday about the official end of the effort.

Those who supported recovery of the species here are unhappy with the announcement, which comes amid the COVID-19 pandemic afflicting the globe.

“We’re concerned about the lack of transparency that led to this decision and its departure from the years-long public process that consistently documented strong public support for careful grizzly bear restoration led by science and community input,” Conservation Northwest Communications Director Chase Gunnell said.

“The Trump administration is committed to being a good neighbor, and the people who live and work in North Central Washington have made their voices clear that they do not want grizzly bears reintroduced into the North Cascades,” Bernhardt said in the statement.

Newhouse is quoted in the statement sharing relief over the decision.

“Homeowners, farmers, ranchers, and small business owners in our rural communities were loud and clear: We do not want grizzly bears,” he stated.

Skagit County leadership had also raised concerns about increasing the presence of grizzly bears in the region. But area conservation groups argued the bears are part of the wilderness found in the North Cascades, and Skagit County residents shared a variety of opinions on the issue.

Jasmine Minbashian, executive director of Methow Valley Citizens Council, said in a written statement Tuesday that she disagrees with Newhouse’s assertion that the majority of his constituents oppose grizzly recovery.

“Newhouse is ignoring a large majority of his constituents who support grizzly bear recovery ... serving only a small portion of special interests,” she said.

“Recent public comment periods and past polling show that roughly 80 percent of respondents support grizzly bear restoration in the backcountry in and around North Cascades National Park, including residents on both sides of the Cascade Crest,” he said in a written statement released Tuesday.

Of 143,000 comments received during the EIS process, Gunnell said about 130,000 supported restoring the bear population.

Minbashian also said the plans taking shape — to bring the population to 200 bears over a 25- to 100-year period — would not have overrun the region, but ensured the bears’ continued existence in Washington’s mountain region.

“The proposed restoration plan is a modest plan that would give grizzly bears a chance at survival in their native home — the North Cascades,” she said.

The health of grizzly bear populations in Alaska and Montana played into the decision to cancel plans for Washington, according to Tuesday’s announcement.

“Grizzly bears are not in danger of extinction, and Interior will continue to build on its conservation successes managing healthy grizzly bear populations across their existing range,” Bernhardt said in the statement.