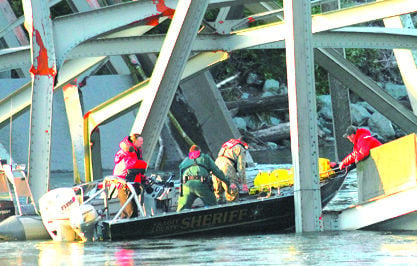 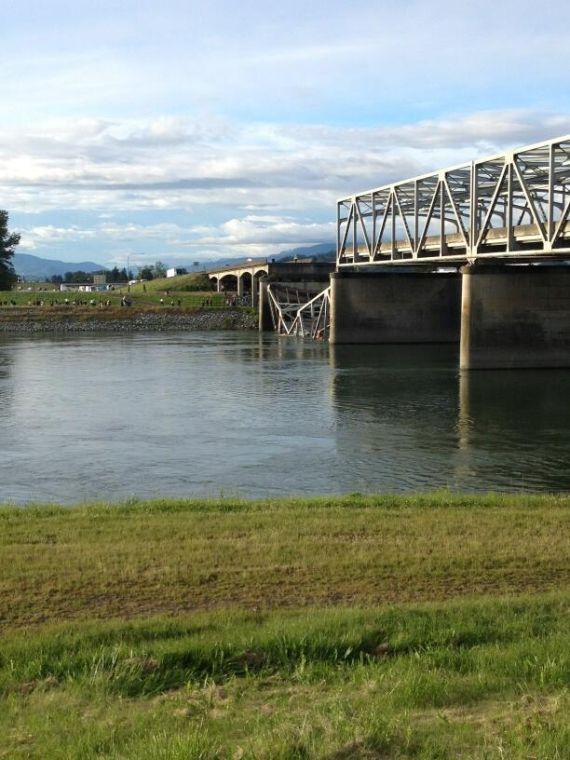 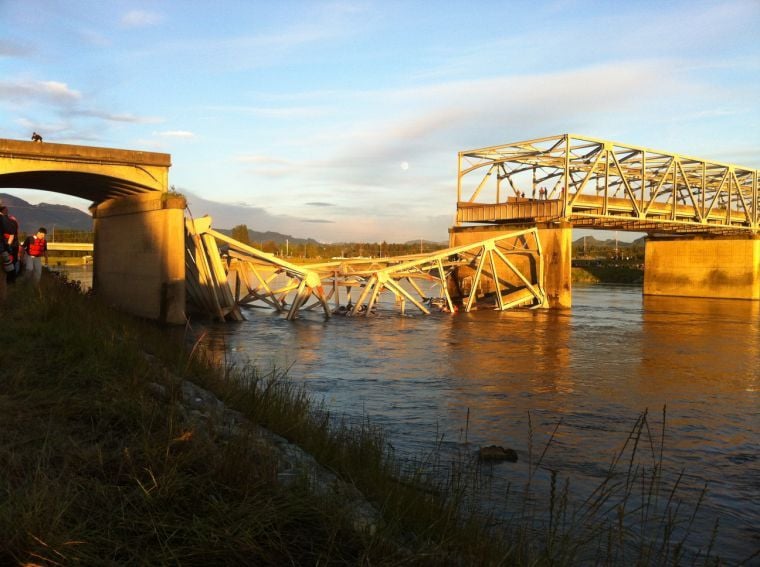 Emergency response officials say no one has died, but divers are still searching the Skagit River for possible survivors after the Skagit River Bridge between Burlington and Mount Vernon collapsed this evening.

Traffic is being diverted from northbound Interstate 5 at Kincaid Street in Mount Vernon, and southbound to Highway 20.

Shortly after the north-most span of the bridge collapsed around 7 p.m., emergency crews flocked to the area, where several vehicles and their passengers were in the river.

A pickup truck pulling a travel trailer and a passenger vehicle fell into the water, and its occupants were rescued by first-responders.

Three rescue boats, several private vessels and divers showed up at the scene. Crowds of people are still lining both sides of the river, watching the rescuers.

Witnesses said they saw three people pulled from the river, and they were taken by ambulance from the scene on stretchers.

When rescuers pulled one man from the roof of his car to dry land, people watching applauded.

Daryl Hamburg, manager of operations for Dike District 12, said cell phones are not working at the moment except for texts. Hamburg said people are everywhere.

“I’m not sure if anybody’s hurt,” Hamburg said. “It’s hard to explain It’s a spectacle."

Businesses and residents in the area told a reporter that their power flickered at the time, possibly from the impact of the collapse.

One man, who had just crossed the bridge shortly before it collapsed, told a reporter he felt a vibration and looked in his rear view mirror to see that the section of bridge he had just crossed was no longer behind him.

"I thought something was wrong with my car at first," the man told the reporter about feeling the vibration.

He said people should be worried about those in the water.

"I'm here," he said, pointing to the water, and added, "they're dead. That's what I'm more worried about."

Cliff Butler, Skagit County manager of roads and operations, said he has crew members standing by if agencies need flaggers.

The National Transportation Safety Board tweeted that the agency is investigating the collapse.

The bridge, built in 1955, was considered structurally deficient in 1992, and functionally obsolete in 2000 and 2010, according to the National Bridge Inventory.

“I am monitoring the bridge collapse in Skagit County. My office stands ready to assist emergency responders and local and state officials. I encourage people to follow police instructions and stay away from the site of the collapse to let first responders address the situation safely.” — U.S. Rep. Rick Larsen in a statement.

“My thoughts and prayers go out to the families affected by this collapse and to the emergency responders on the scene. My office is closely monitoring this situation in coordination with federal, state and local officials. We stand ready to help the community in Skagit County and to support the ongoing emergency response efforts. I encourage people in the area to avoid I-5 and to follow the directions of local officials.” — U.S. Sen. Maria Cantwell, in a statement.