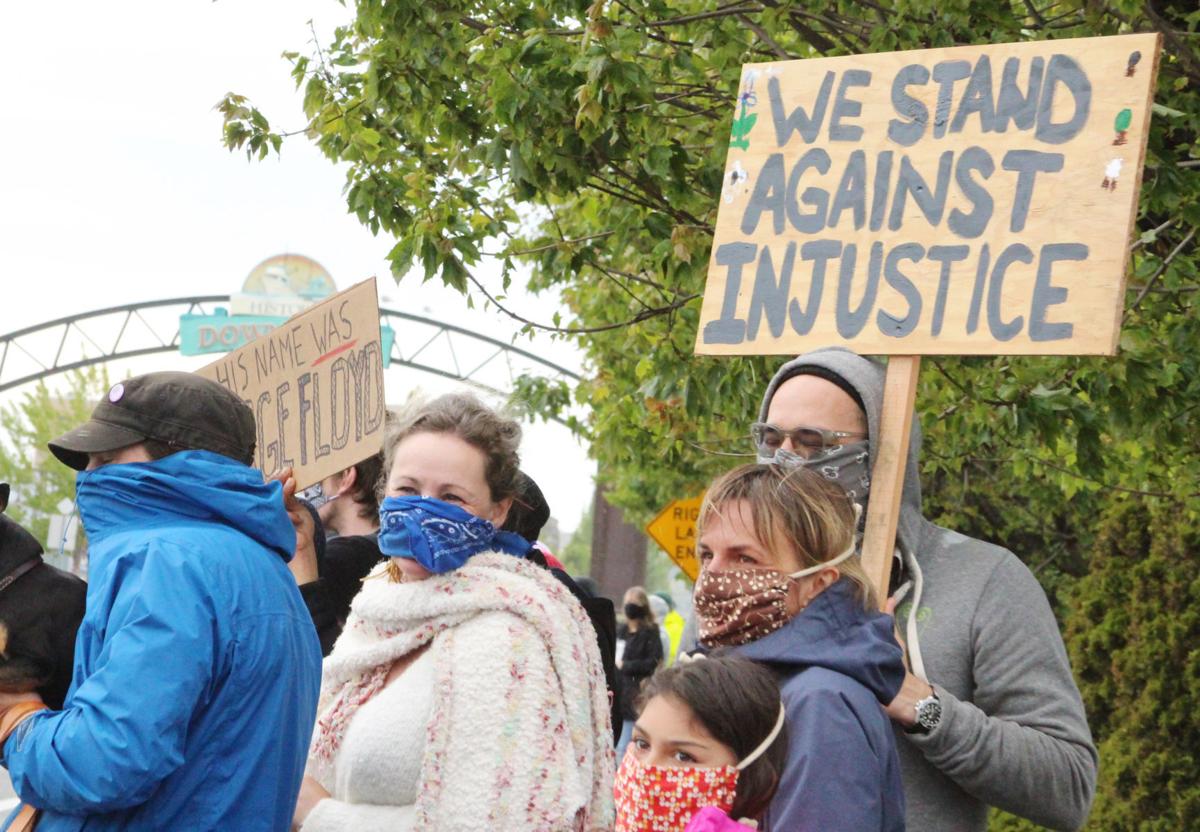 Anacortes residents joined protests around the nation on Saturday with a demonstration on Commercial Avenue to stand against police brutality and to stand with people of color following the death of George Floyd in Minnesota.

A group held signs and chanted in the street in Anacortes for about five minutes following a two-hour protest Saturday in solidarity for George Floyd, a black man who died in custody of Minneapolis police last week.

Anacortes residents joined protests around the nation on Saturday with a demonstration on Commercial Avenue to stand against police brutality and to stand with people of color following the death of George Floyd in Minnesota.

A group held signs and chanted in the street in Anacortes for about five minutes following a two-hour protest Saturday in solidarity for George Floyd, a black man who died in custody of Minneapolis police last week.

ANACORTES — An otherwise peaceful two-hour protest here Saturday afternoon took a turn for the worse at the end, resulting in minor injuries and the possiblity of criminal charges.

About 80 residents here joined people across the nation Saturday in demonstrating for justice after the death of a black man in police custody last week in Minnesota made national news and re-ignited the "Black Lives Matter" movement.

Anacortes residents carried homemade signs, and vehicles generally honked approval as they passed by for most of the event.

Toward the end, about one-third of the protesters blocked the busiest intersection in town in front of the Safeway store, in what one protester called an "act of civil disobedience."

Blocking traffic wasn't preplanned, said protester Evan Saxton. But some of the group decided doing so for a five-minute period at the end would "amplify the message" in a peaceful way.

Saxton said most drivers seemed patient about the inconvenience. The group was reaching the end of the five-minute period when an SUV decided to wait no longer, he said.

Saxton said the vehicle's fender hit his knee before the driver veered to the right and knocked a woman down. He said at that point, another man verbally confronted the driver and ultimately "put his hand through the back window."

Police Sgt. Terrence Clifford said officers were called to respond to a large group of people blocking the street, but soon found a woman had been injured.

Nick Rennis, who was among the protesters, said he and others helped the woman get up.

“Because the pavement was slick, (the car) knocked her feet out from under her, so she planked and hit the ground," he said.

There were no apparent serious injuries, but Clifford said the investigation continues. Criminal charges could result, though he did not provide more information.

Saxton said he was shaken after the event but said he felt it was important to make a public stand about injustice.

"We have three Native American reservations in our county. We have Hispanic people in our community who face the same thing."

Saxton said he's seen things that made him aware of his white privilege, and he isn't trying to be a representative for someone else's cause.

"It's not my story," he said, but added that he also feels responsibility to speak up for the community at large.

While he doesn't condone violence, Saxton said he believes the anger people are showing around the country at yet another incident involving the death of a black man in police custody isn't just about the death of George Floyd.

The video showing his treatment before he died "is merely a trigger that tells a story going back 400 years — 400 years of oppression," Saxton said.

Anacortes City Councilman Anthony Young was one of a few public officials who showed up at the event. He said he learned about the protest just an hour before it started and decided that as an elected official and a person of color, he wanted to show support for those who would go stand in the rain for a cause close to his heart.

"It energized me, and I went to every person I came across to say 'thank you for lifting your voice; thank you for being bold enough to tell the truth to our world so we can bring about this change,'" he said. "It was just beautiful.”

Young left before the end and did not see what happened, but talked to the police chief and the sergeant on scene afterward when he heard what happened. He commended the police for defusing what was becoming a volatile situation. But the incident reinforced his opinion that the police force here — like anywhere — needs specialized diversity and inclusion training.

"We’re lucky in Anacortes, but imagine the amount of diversity coming through," he said. "They need the skills to defuse rather than shoot."

This headline makes it sound like the protesters started violence, and doesn't reflect the events described in the article. A more accurate headline would be "Motorist hits protester with their car." A lot of people read just the headline and not the whole article. Having the headline contradict the article is irresponsible journalism.