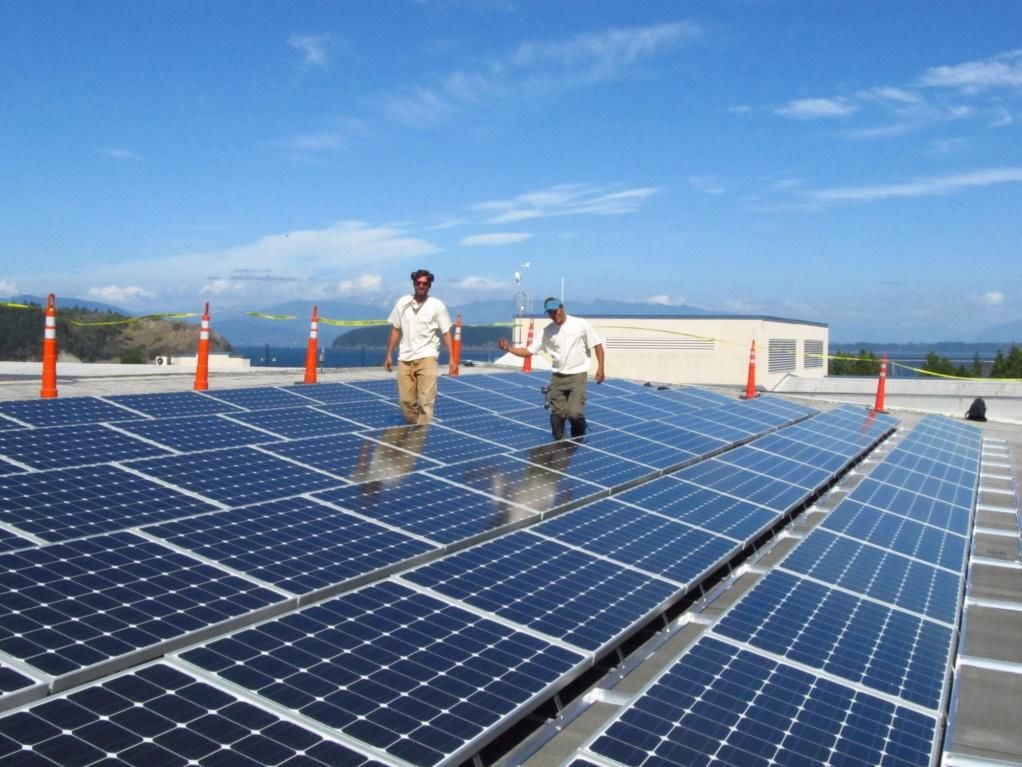 Western Solar staff celebrate during the installation of the first Skagit Community Solar project on the Anacortes Middle School roof in 2013. 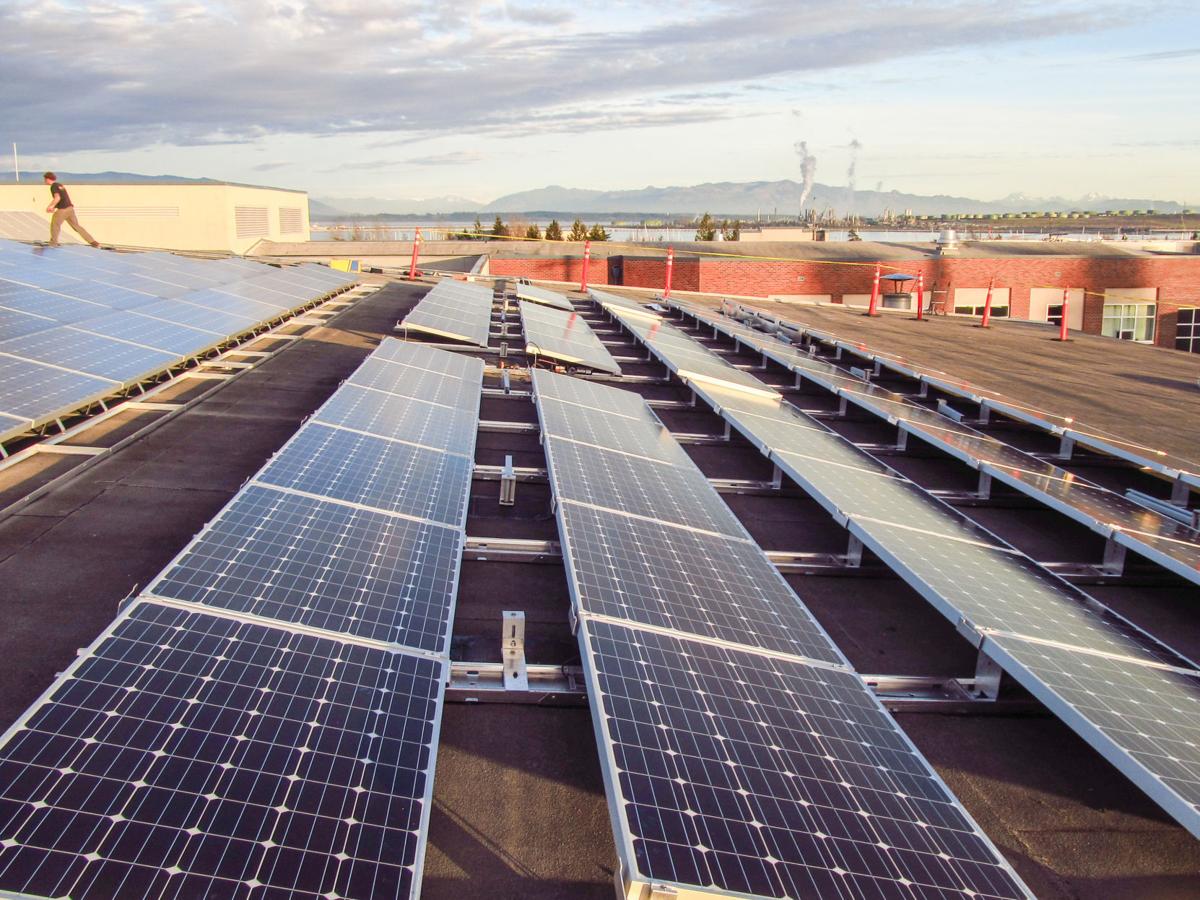 Solar panels extend across the roof of the Anacortes Middle School, site of the first Skagit Community Solar project. 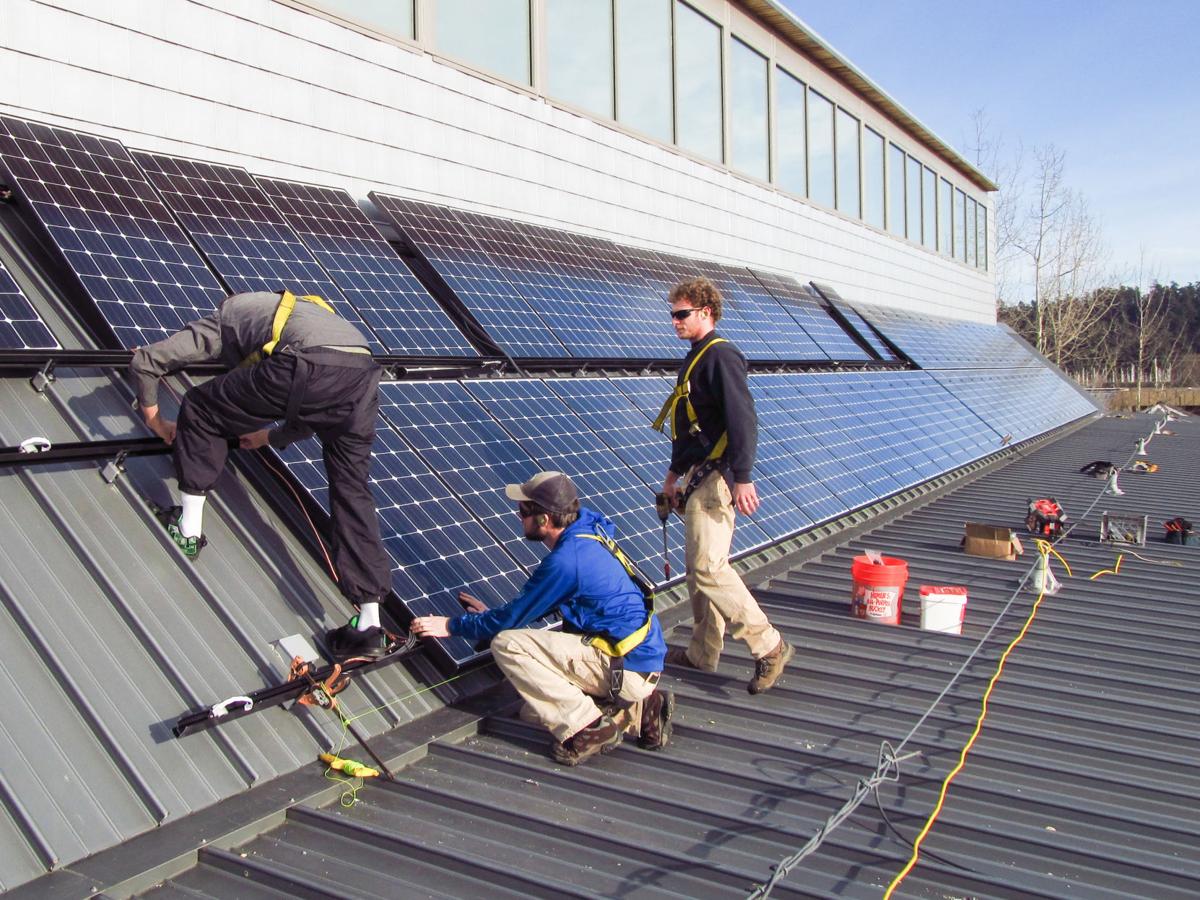 Western Solar staff install an array of panels on the Anacortes Public Library roof in mid-2015.

A seagull preens itself in February 2016 on the roof of the Anacortes Public Library above an array of solar panels. The solar array is one of five installed through the Skagit Community Solar program.

Western Solar staff celebrate during the installation of the first Skagit Community Solar project on the Anacortes Middle School roof in 2013.

Solar panels extend across the roof of the Anacortes Middle School, site of the first Skagit Community Solar project.

Western Solar staff install an array of panels on the Anacortes Public Library roof in mid-2015.

A seagull preens itself in February 2016 on the roof of the Anacortes Public Library above an array of solar panels. The solar array is one of five installed through the Skagit Community Solar program.

Seven years after a Western Solar crew climbed onto the Anacortes Middle School roof to install dark blue, shimmery panels that can harness the energy of the sun, the Skagit Community Solar Program that sponsored the installation recently came to a close.

During the intervening years, Skagit Community Solar achieved four more projects, and the use of solar power on public and private buildings in the region grew.

Skagit Community Solar was a program led by the climate-change focused nonprofit Transition Fidalgo & Friends. The program brought local investors together to launch solar arrays on public buildings, largely to give the up-and-coming renewable energy source some time in the spotlight.

“The investors really were in it to promote solar,” said Eric Shen, a Transition Fidalgo member and a leader of the Skagit Community Solar program. “These were high-profile projects that the public would take notice about as opposed to being on an individual’s house.”

Together, those five solar arrays can generate 85,300 watts of power for those Anacortes and La Conner facilities. So far, they’ve generated about 570,200 kilowatt-hours of electricity — enough to power about 52 homes for a year, according to U.S. Energy Information Administration data.

“It’s electricity that didn’t have to be generated using fossil fuels, and that is an advantage,” Shen said.

The visibility got the community talking and showcased that solar power works well here despite many gray days.

The library at one time dedicated a computer to showcasing the solar power generation as occurred on the building’s roof.

“We’re proud that we have it, and it’s nice to know now that it’s fully paid for itself,” she said.

The solar arrays, each comprised of iTek Energy solar panels made in Washington, were initially paid for by 55 local investors with Skagit Community Solar. The state offered incentives for that kind of program through annual payments to investors is based on the amount of electricity produced. Puget Sound Energy also offers reimbursement for excess energy supplied to the power grid.

Shen said that meant full refunds and a small bonus for the project investors within a few years.

Now, Skagit Community Solar has turned ownership of the projects over to the city of Anacortes, town of La Conner and Anacortes School District.

“As of July 1, we took full ownership of it,” La Conner Facilities Manager Brian Lease said of the solar array at Maple Hall.

Even before taking ownership, the solar array powered much of the activity at Maple Hall and reduced the town’s utility costs.

“I’d like to see more of it,” Lease said of the move to solar power. “In a small municipality like ours, every dollar counts, so especially when we can offset utility costs that’s a positive for our budget.”

The average monthly bill La Conner paid for electricity at Maple Hall in the five years before the solar installation was about $205, according to data provided by La Conner Finance Director Maria De Goede.

Following the installation of the five Skagit Community Solar projects between July 2013 and June 2015, more private solar installations began popping up on roofs of homes in the area.

Shen, who was an early adopter of private solar power at his forested Fidalgo Island property, was excited to see growth in the number of solar arrays connected to PSE’s regional grid, from just over 200 to nearly 10,000 in the past 13 years.

PSE had 9,253 customers with solar arrays across eight counties by the end of 2019, according to data provided by Leslie Moynihan, PSE product manager for Customer Connected Renewables. PSE expects to reach 10,000 this year.

The data also shows that in the Anacortes area specifically, the first few customer-owned solar arrays were installed in 2006. Now there are 285.

“The number jumps in 2013 when we did the first project and then in 2015, when we did the other four, it jumps again,” he said. “We were really happy to see that because that was real proof that we encouraged people in the public to put solar in.”

Kevin Maas, who served as an administrator between Skagit Community Solar investors and the state’s incentive program, also called the program a success.

Since projects like those launched locally using state incentives helped boost the adoption of solar, the cost of new installations has declined.

“When we started six or seven years ago, the reimbursement for excess electricity wouldn’t have paid off the arrays without that state incentive,” Maas said. “The price of solar has come down so far ... it’s starting to pencil without a state incentive.”

Someone now willing to personally invest without the incentive program could still expect to earn their money back within about 10 years “and then have free power for several more decades,” Maas said.