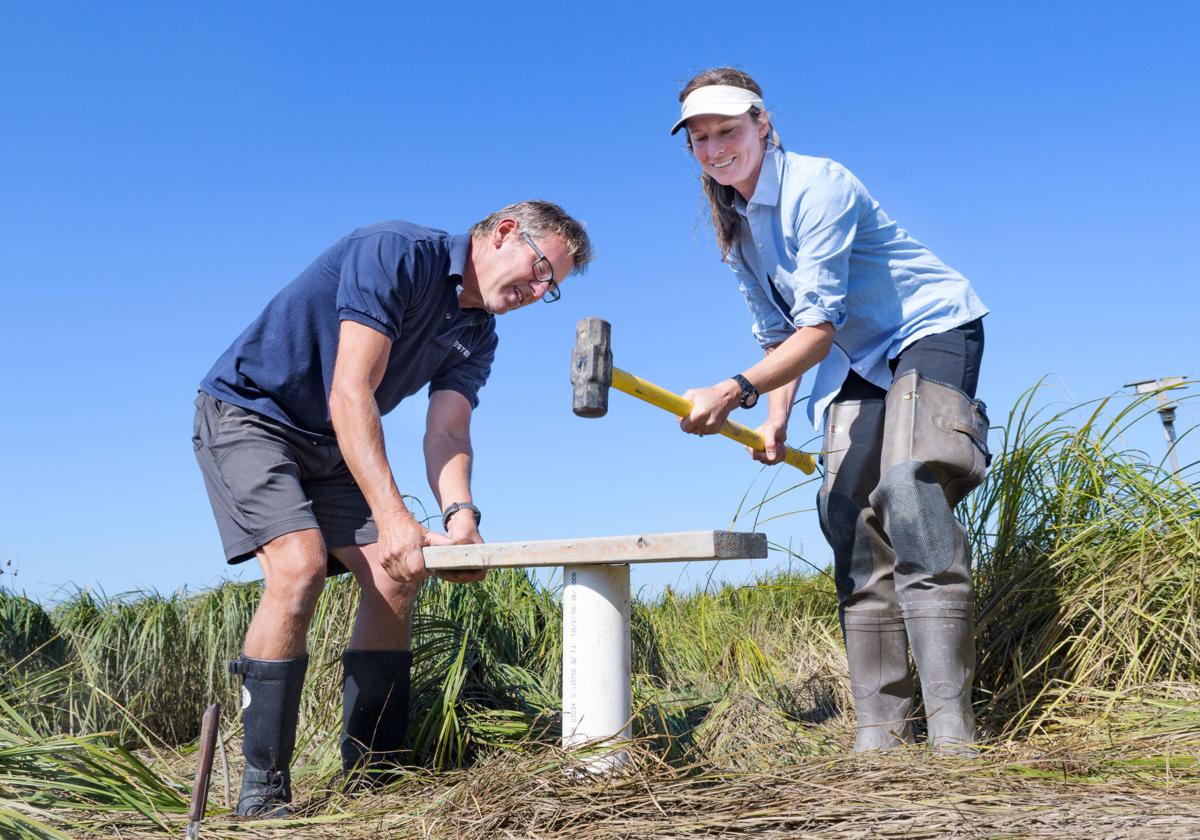 Western Washington University researcher John Rybczyk holds a board across a piece of PVC pipe while fellow researcher Katrina Poppe hammers the tube into the ground to take a soil sample at the Port Susan Bay Preserve on Monday, Aug. 26, near Stanwood. 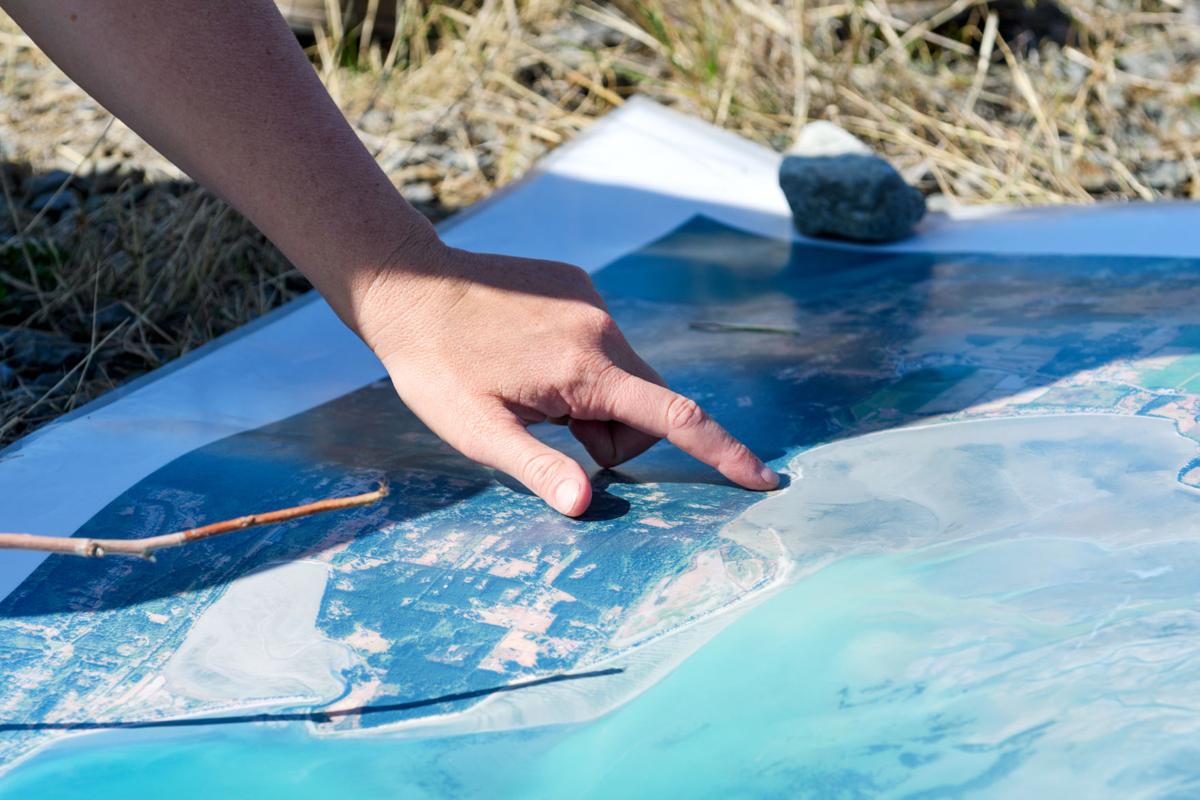 Molly Bogeberg, a marine projects manager for The Nature Conservancy, points to satellite photo as she discusses the restoration of salt marsh at the Port Susan Bay Preserve near Stanwood. 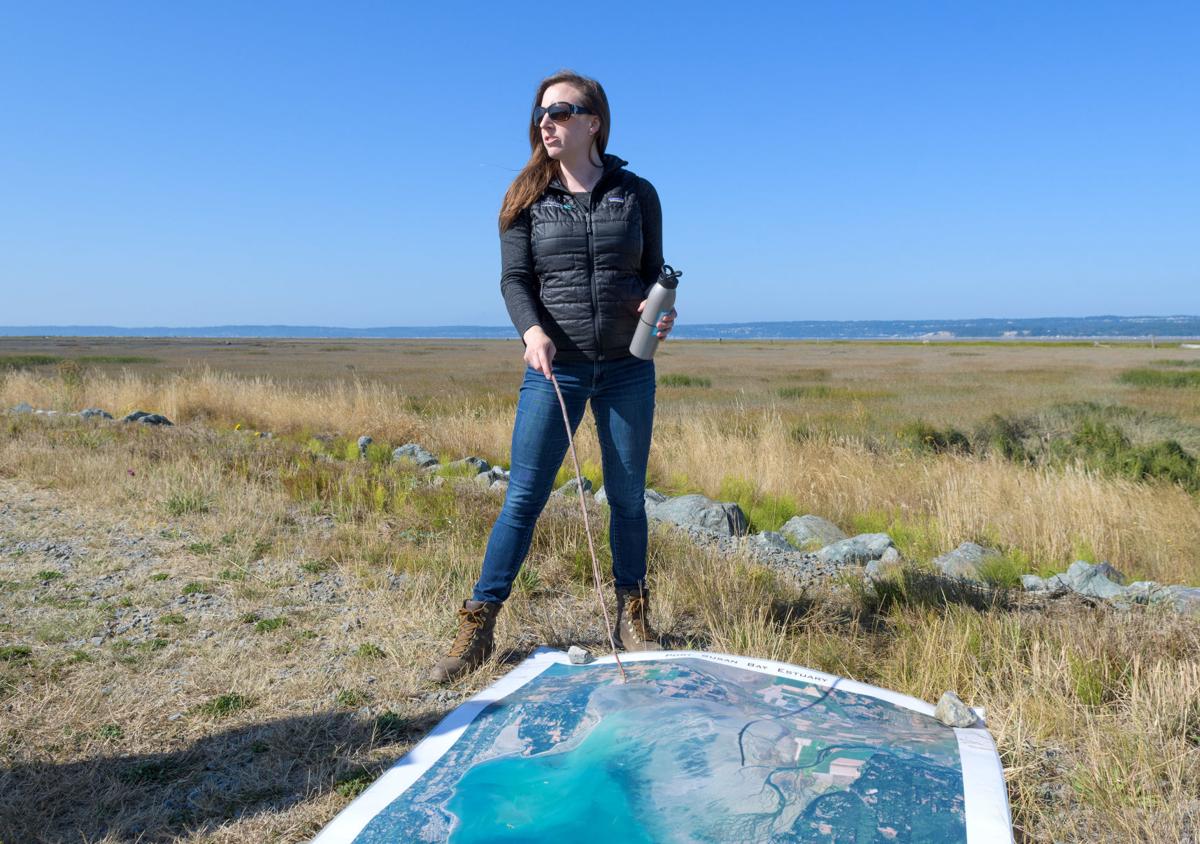 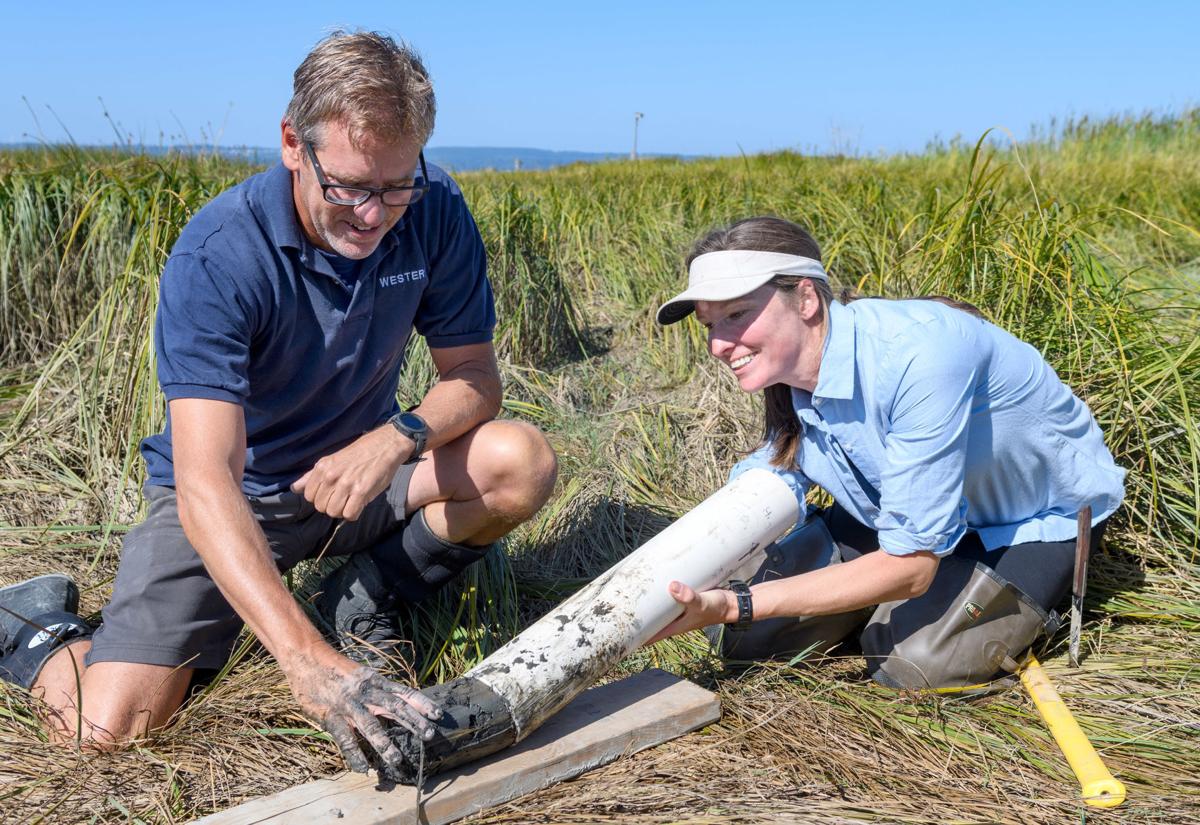 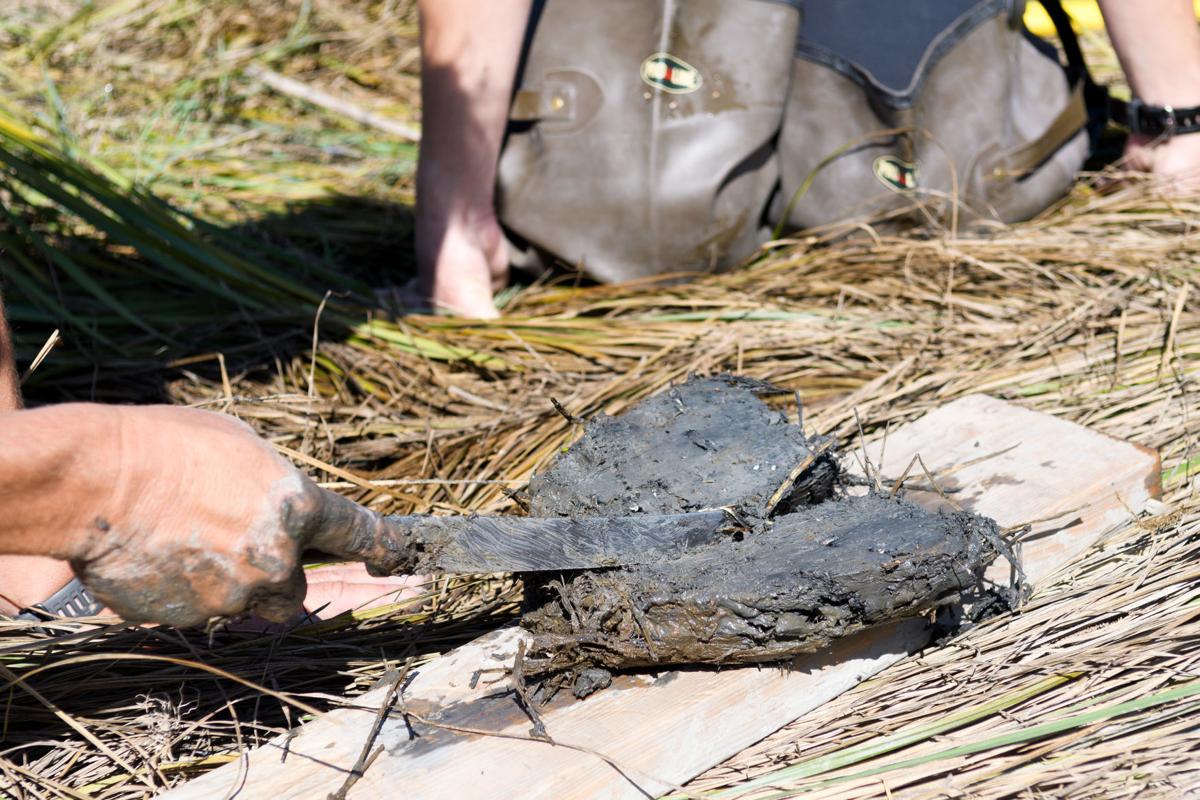 Western Washington University researcher John Rybczyk slices into a core sample taken from a wetland on Port Susan Bay, along the Stillaguamish River near Stanwood. 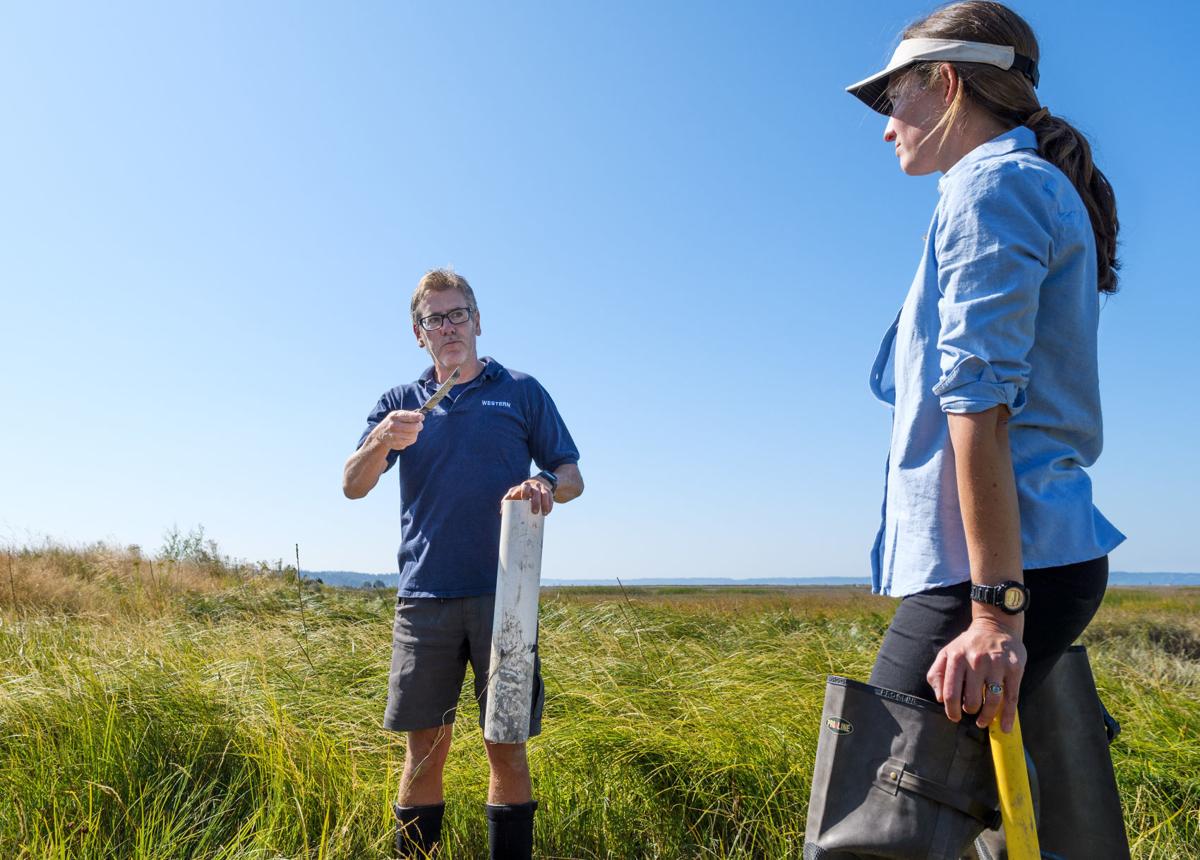 Western Washington University researcher John Rybczyk holds a board across a piece of PVC pipe while fellow researcher Katrina Poppe hammers the tube into the ground to take a soil sample at the Port Susan Bay Preserve on Monday, Aug. 26, near Stanwood.

Molly Bogeberg, a marine projects manager for The Nature Conservancy, points to satellite photo as she discusses the restoration of salt marsh at the Port Susan Bay Preserve near Stanwood.

Western Washington University researcher John Rybczyk slices into a core sample taken from a wetland on Port Susan Bay, along the Stillaguamish River near Stanwood.

PORT SUSAN BAY PRESERVE — Framed by tall grasses and patches of cattails, John Rybczyk and Katrina Poppe pulled a white tube from the ground Monday and pushed a nearly-black cylinder of mud and roots from its bottom.

The two Western Washington University researchers, who specialize in studying estuaries, were showing how they gathered salt marsh sediment from throughout The Nature Conservancy’s Port Susan Bay Preserve in 2016.

After collecting dozens of such samples — called core samples — up to a meter long and analyzing how much carbon they contained, the researchers concluded in a report this year that the portion of the preserve restored to the tides in 2012 is excelling at preserving carbon.

In fact, the roughly 150 acres is locking up carbon twice as fast as marshes outside the restored area.

“In terms of carbon sequestration, this project has been a success,” Rybczyk said.

The researchers estimate that as the restored salt marsh continues to rebuild, it could capture about 9,000 metric tons of carbon, which is the equivalent of emissions from 7,000 vehicles for one year, according to the study.

Carbon stored in coastal habitats such as the Port Susan Bay salt marsh, Padilla Bay mudflats and Skagit River delta — called blue carbon — is being increasingly studied in the Salish Sea region and throughout the world.

It is recognized for its potential to reduce the amount of climate change-inducing carbon dioxide that gets into the atmosphere.

That carbon is primarily in the form of plant matter that gets buried under wet sediment, where oxygen can’t reach it to start the decomposition process that would release carbon dioxide.

As Rybczyk sliced the cylinder of sediment in half to reveal twisted roots and a gray hue indicative of iron also untouched by oxygen, he said, “These are the roots of these plants. This is carbon locked up here.”

The restoration site — where salt marsh plants are thriving and birds including bald eagles are finding habitat — was once diked, drained and used as farmland, said Molly Bogeberg, a marine projects manager for The Nature Conservancy.

In 2012, the dike along the bay was removed and another along the Stillaguamish River was lowered to allow freshwater and saltwater into the area.

Since then, sediment from the Stillaguamish River has been washed into the area. With layer after layer of sediment forming, the marsh has risen about 7 inches.

“It was a bowl and now it’s filling up,” Rybczyk said.

Locking up blue carbon was an added benefit of the project, which was aimed at restoring habitat for endangered chinook salmon and other wildlife, creating a buffer along the shoreline to protect against storm surge and sea level rise, and helping to filter freshwater draining out of the watershed to the bay.

“Together with all of these other protections, with habitat and storm surge resilience and water filtration, it adds up to be a really important area,” Bogeberg said.

Rybczyk and Poppe’s study out of the university’s Environmental Science Department is the first to document blue carbon accumulation as a result of restoration work.

“What we have found, what we have done in the Stillaguamish, is pretty unique,” Rybczyk said in November in the lab where he and Poppe processed the core samples. “This is pretty new.”

At that lab, core samples such as those shown Monday, were divided into sections called pucks, which were examined to determine how much carbon was there and how quickly it accumulated.

Determining the accumulation rates — which are based on the presence of a radioactive type of lead found in the environment — requires a machine Rybczyk and Poppe have access to at Western’s Huxley College of the Environment.

The two said that machine is in part why they’ve found themselves in the midst of the latest blue carbon research in the Pacific Northwest.

“That’s part of why we are so involved in blue carbon, because not a lot of people have this machine,” Rybczyk said, pointing to what looks like an oversized, air-tight crockpot with walls several inches thick.

While critical to understanding how quickly carbon accumulates, that machine takes a long time to complete the job — about a month to analyze 10 pucks, they said. That’s why it took about 2 1/2 years after gathering core samples to reach a conclusion.

In the case of the Port Susan Bay Preserve, restoration has allowed blue carbon to accumulate instead of being exposed by erosion and released as carbon dioxide.

“Previous to the restoration, that area was actually losing carbon,” Rybczyk said. “It was subsiding, so it wasn’t gaining carbon at all.”

The study showcases a new benefit to consider when planning restoration projects.

“Other people will look to it for what they can expect or hope for future restoration projects,” Rybczyk said.

Poppe said before she and Rybczyk completed their study in January they’d already heard from others interested in seeing their data.

Rybczyk and Poppe are two of several local researchers involved in studying blue carbon. There are others at Western Washington University and at the Padilla Bay National Estuarine Research Reserve.

The overall goal is to document how much blue carbon coastal habitats, including those along Skagit County’s shoreline, are capable of holding.

Researchers, government agencies and restoration advocates agree that understanding how much blue carbon is there or how fast it could accumulate is the first step toward encouraging preservation and restoration of coastal habitats to help limit the world’s greenhouse gas emissions.

The slender green leaves of eelgrass that sway in the waters of Padilla, Samish and Skagit bays are widely recognized as key habitat for speci…