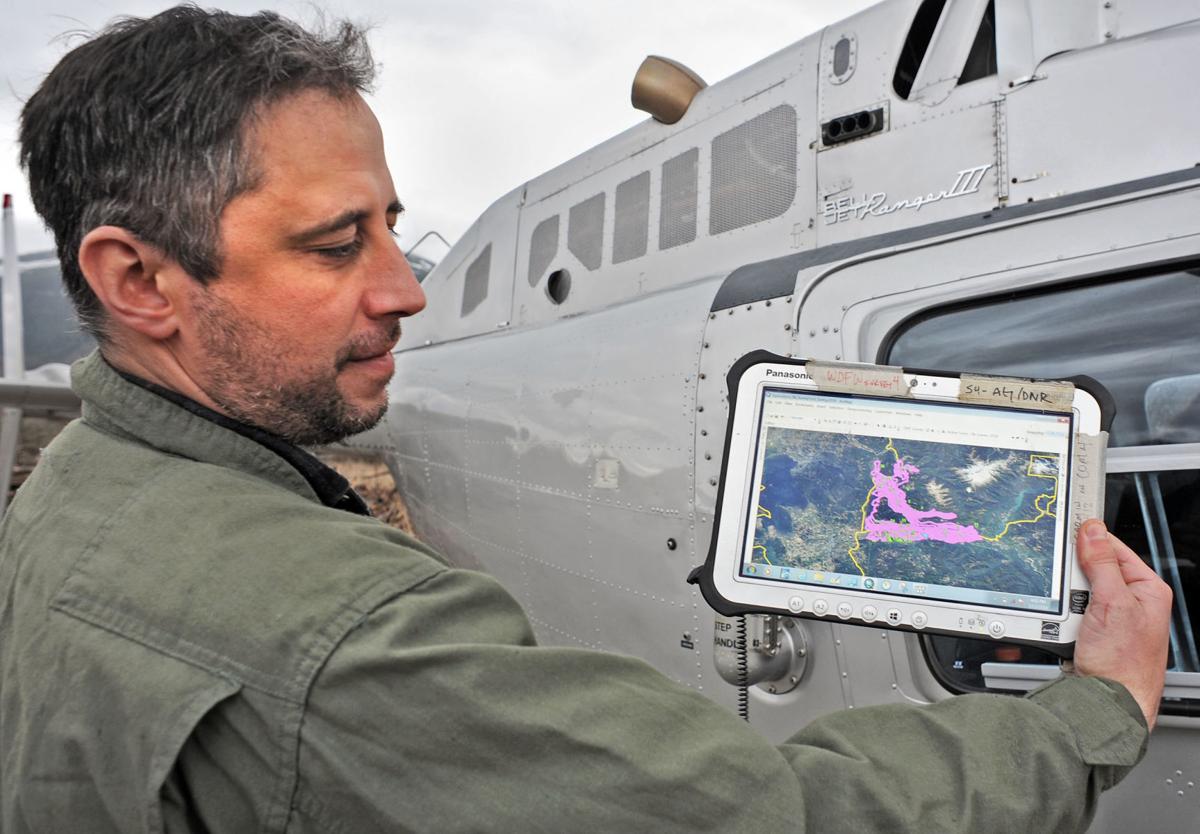 Brock Hoenes of the state Department of Fish & Wildlife holds a tablet with a map depicting flight paths used to count elk, before boarding a helicopter near Hamilton on Tuesday to continue the count. 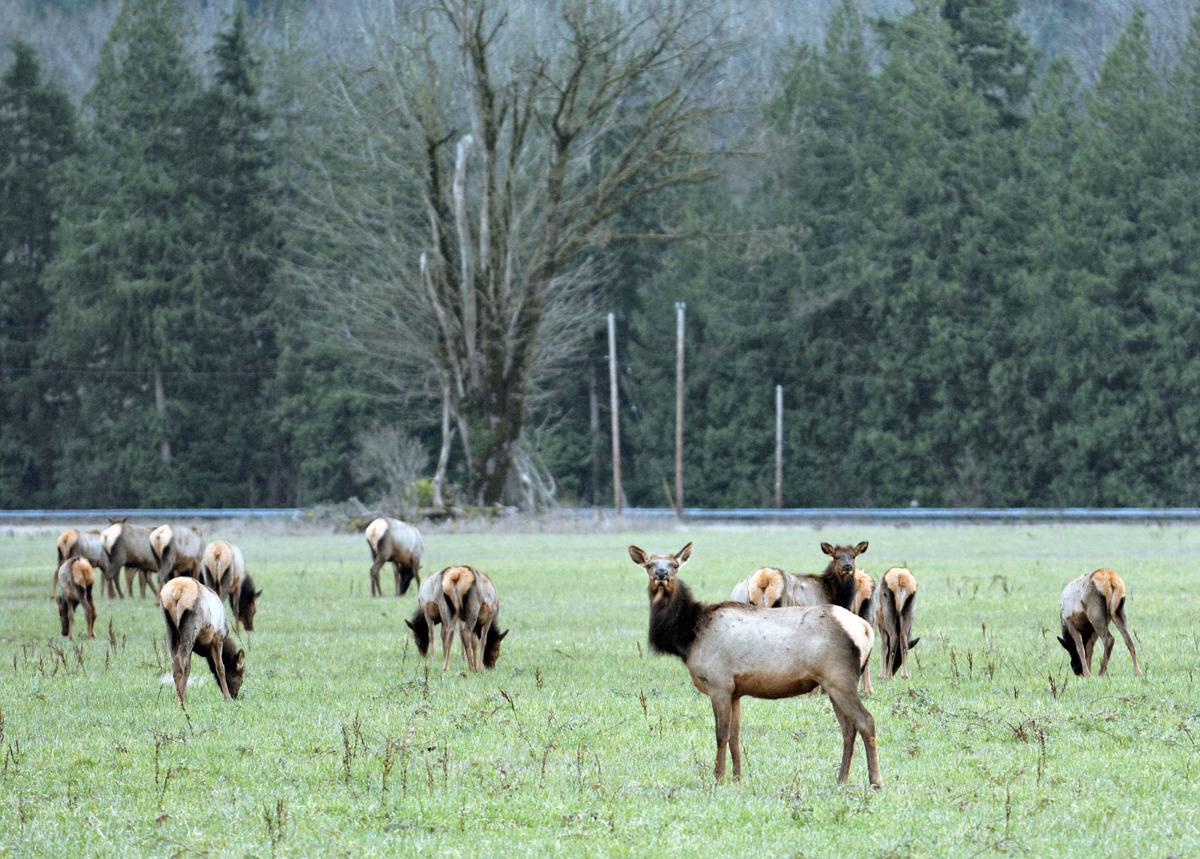 Elk graze Tuesday in a field east of Hamilton. 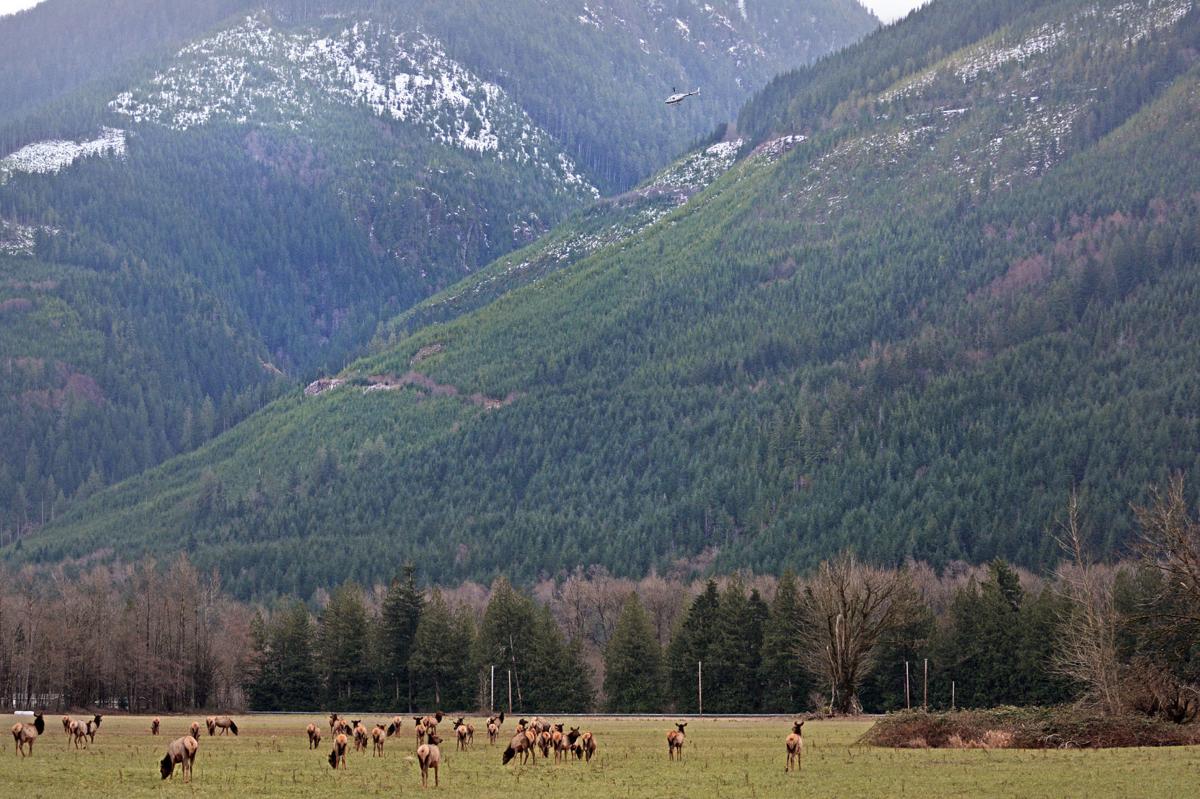 A helicopter flies over a group of elk Tuesday while they graze in a field east of Hamilton. 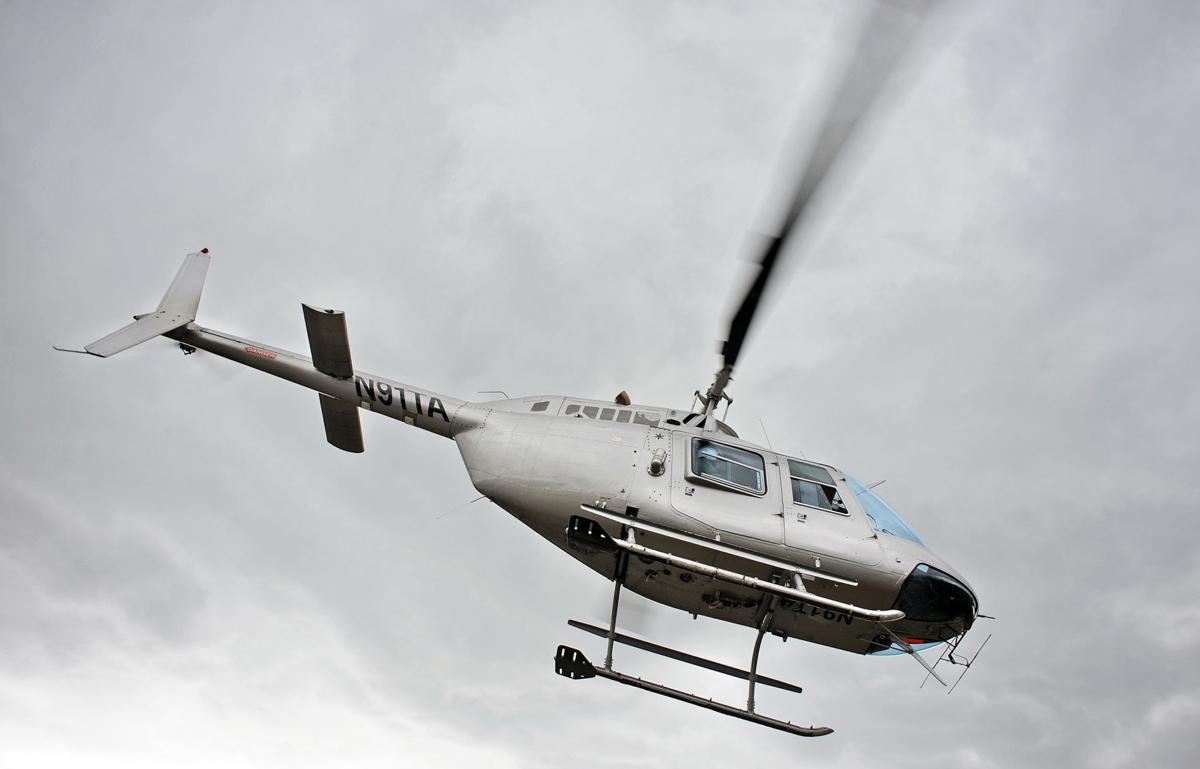 A helicopter equipped with a radio antenna takes off Tuesday near Hamilton as part of an elk count.

Brock Hoenes of the state Department of Fish & Wildlife holds a tablet with a map depicting flight paths used to count elk, before boarding a helicopter near Hamilton on Tuesday to continue the count.

Elk graze Tuesday in a field east of Hamilton.

A helicopter flies over a group of elk Tuesday while they graze in a field east of Hamilton.

A helicopter equipped with a radio antenna takes off Tuesday near Hamilton as part of an elk count.

HAMILTON — As elk grazed in fields in parts of Skagit and Whatcom counties last week they were counted and photographed from the air and the ground.

While a helicopter survey of area elk has been done each spring since 2006, this year the survey was expanded, with counts also being done on the ground to provide more data.

Efforts to increase the North Cascades elk herd to preserve the species and support hunting opportunities — while preventing damage to area farms and collisions between elk and drivers — presents an ongoing challenge for wildlife managers.

The recent elk survey is part of an ongoing effort to understand how large the population is, how the herd moves throughout its range and what types of projects are effective in keeping the animals off private property.

The state Department of Fish & Wildlife and area tribes, which co-manage wildlife, collaborate on the annual survey.

On Tuesday, Fenner Yarborough with Fish & Wildlife watched about 40 elk in a field off Highway 20 as a helicopter flew overhead.

The pilot, Jess Hagerman of Northwest Helicopters, flies over areas in the Skagit and Acme valleys each spring to survey the North Cascades elk herd, Yarborough said.

From the helicopter they counted the elk and photographed them. The photographs are used to double check their counts and to determine gender and the number of young elk.

State and tribal staff recently also counted elk from vehicles and gathered reports from landowners of fields where the elk are known to frequent.

“We’ve got it covered basically from Sedro-Woolley all the way to Concrete,” Yarborough said.

He said the goal of adding a ground component to the survey is to get a clearer picture of just how large and spread out the elk herd is.

Hoenes, Fish & Wildlife’s elk specialist, said the helicopter component of the survey is limited to areas with good aerial visibility and provides a rough estimate of the number of elk in the area based in part on how many collared elk are seen.

Collars have been put on elk in recent years to help with research and management. Yarborough said 32 collars are currently transmitting radio signals and GPS locations.

Because the aerial survey provides only a rough estimate, wildlife managers have determined that additional survey methods are needed.

“While the current survey effort provides perspective on herd size, gender and age composition ... it does not provide a comprehensive assessment of whether population objectives across the entire range of the elk herd are being met,” according to an elk herd management plan currently being completed under the State Environmental Policy Act.

One of the goals in the draft plan released in November is to establish ways to gather more accurate population estimates. Yarborough said adding ground components this year is part of the agency’s effort to achieve that goal.

The state and Point Elliott Treaty tribes set a goal in 2002 to restore the population to 1,950 elk. That number falls within the goal range in the new draft plan, which is between 1,700 and 2,000.

Based on helicopter surveys over the years, the size of the herd is estimated to be near the restoration goal.

As the herd has grown, the elk have become more frequent visitors of areas including the Upper Skagit reservation northeast of Sedro-Woolley.

“They come right onto the reservation, and we view that as a good thing. We appreciate having elk on our land,” Schuyler said.

The Upper Skagit and Stillaguamish are among several tribes involved in efforts to restore the area herd.

Schuyler and Jennifer Sevigny, wildlife biologist for the Stillaguamish Tribe of Indians, said the elk are culturally important.

Tribal members who hunt the elk eat the meat and use other parts of the animal, such as using the hide to make drums.

Sevigny said the Point Elliott Treaty of 1855 ensures the Stillaguamish and other tribes the right to continue hunting elk.

“Elk are part of the tribe’s history and restoring elk will help protect the treaty rights of current and future generations,” she said.

Schuyler said restoring the elk population is also about more than hunting.

“It’s about having the environment whole and healthy. The elk were here naturally and we don’t want to see them go away,” he said.

Restoration of the elk herd has become a point of contention for some landowners in Skagit County.

Farmers whose fields attract the elk have said the 400- to 800-pound animals have knocked down fences, grazed in areas meant for cattle and trampled crops.

While the herd’s 4,650-square-mile range includes parts of Whatcom, Skagit, Snohomish and King counties, the animals are primarily found near the south fork of the Nooksack River and between Sedro-Woolley and Marblemount.

While there are federal, state and local public lands in those areas, there are also farms and homes.

Fish & Wildlife received 49 complaints from those areas in Skagit and Whatcom counties about damage caused by elk in 2015, and 65 complaints in 2016, according to the draft plan.

Fish & Wildlife conflict specialist Scott Witman said although some property owners have seen less damage since the state and the tribes installed fencing to keep elk out, he has continued to receive complaints. He received 79 in 2017.

In some cases, property owners have been compensated for damage.

Witman said it’s a challenge to entice the elk to use public lands and discourage them from going onto private lands.

The elk also present a hazard for drivers.

In Skagit County, many of the fields frequented by elk are along Highway 20, a busy route connecting Sedro-Woolley and communities to the east.

It’s not uncommon to see dozens of elk in areas along the highway, and there are several collisions involving elk along the route each year, according to state Department of Transportation records.

Randy Good, who raises cattle on his property just east of Hamilton, said he has witnessed several collisions between vehicles and elk near his home.

Those collisions can cause significant damage to vehicles.

According to county records, two Skagit County Sheriff’s Office vehicles collided with elk in east Skagit County in 2017, totaling one vehicle and costing about $5,000 in repairs to the other.

The deputies involved were not injured, according to the accident reports.

Kelly McAllister of the Department of Transportation said Highway 20 between Sedro-Woolley and Concrete is one of a few areas in the state where elk collisions are frequent.

Between 2012 and 2016, the Department of Transportation received 139 reports of elk carcasses along the highway between mileposts 66 and 88.