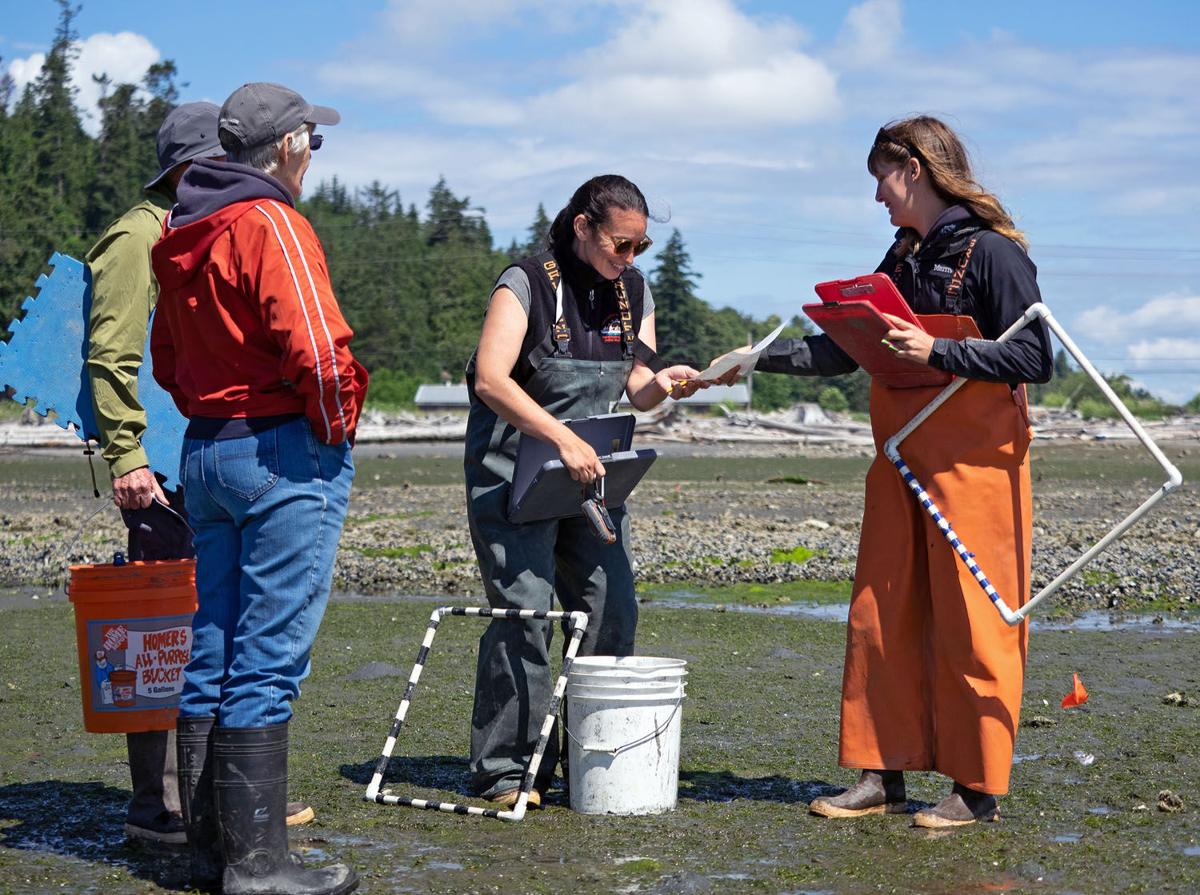 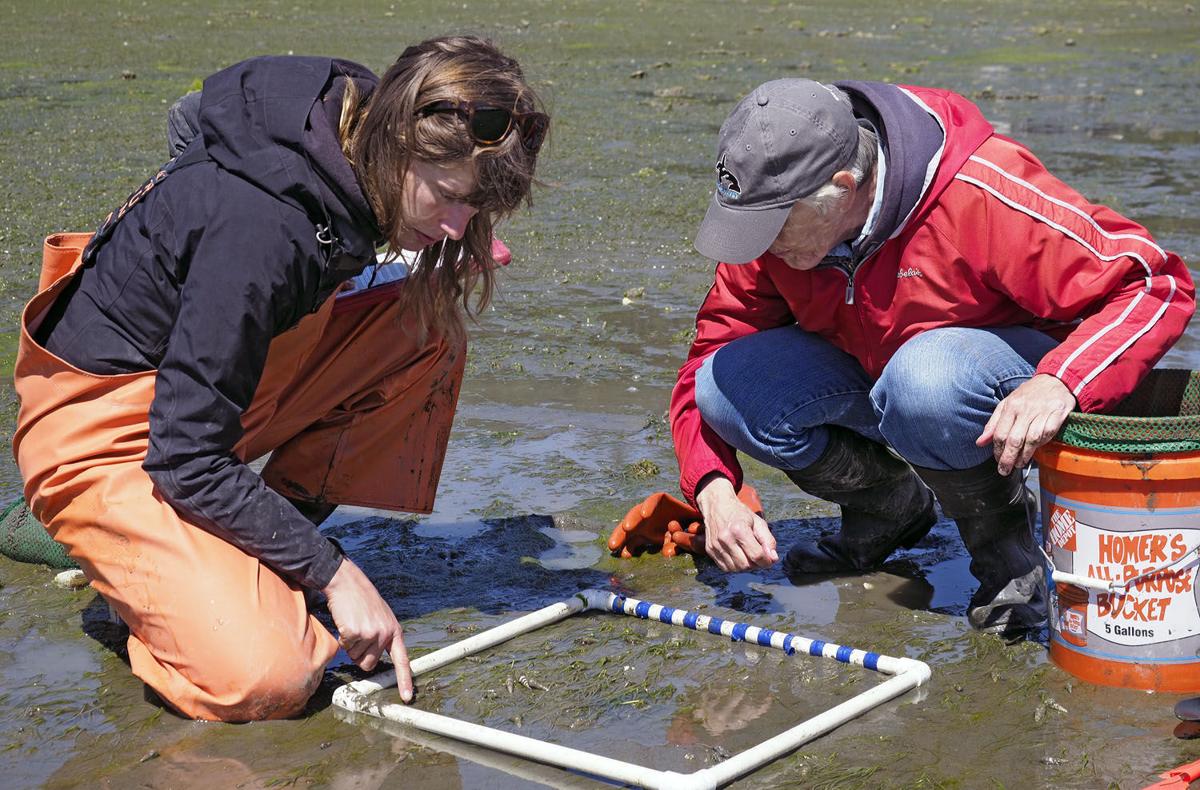 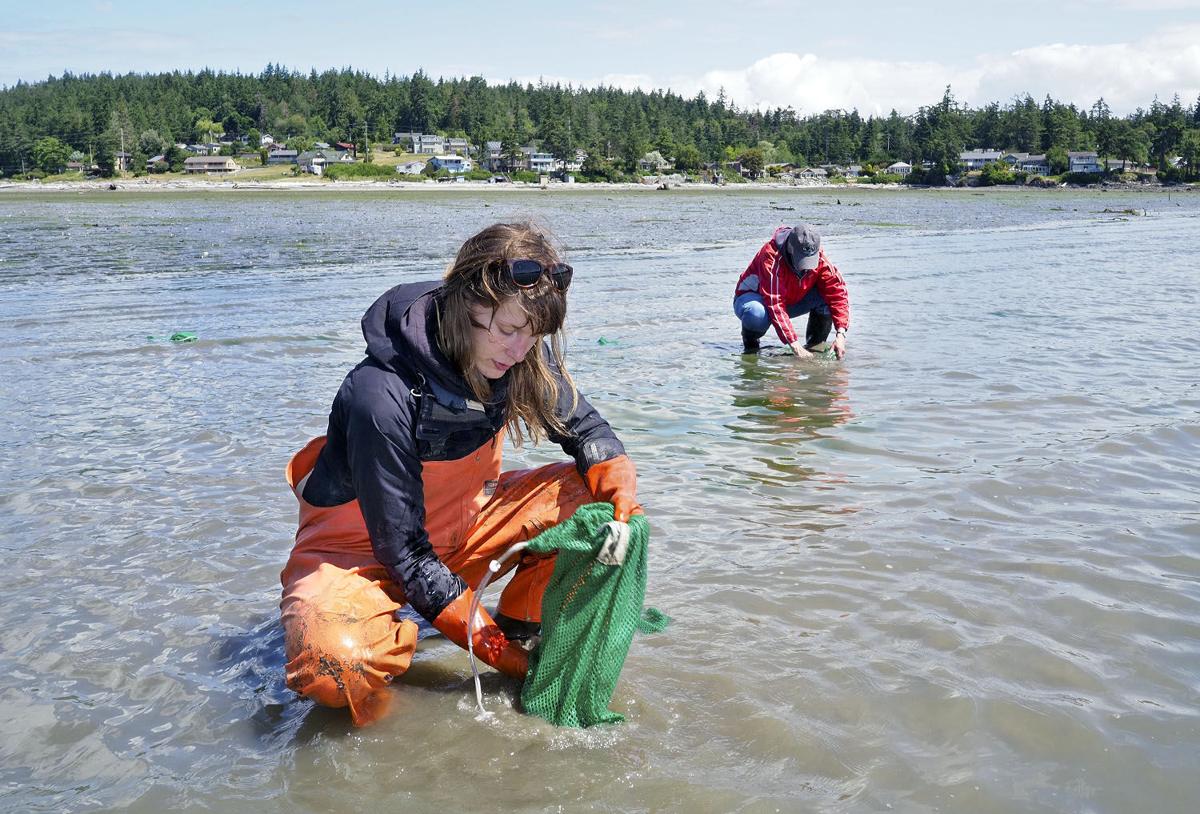 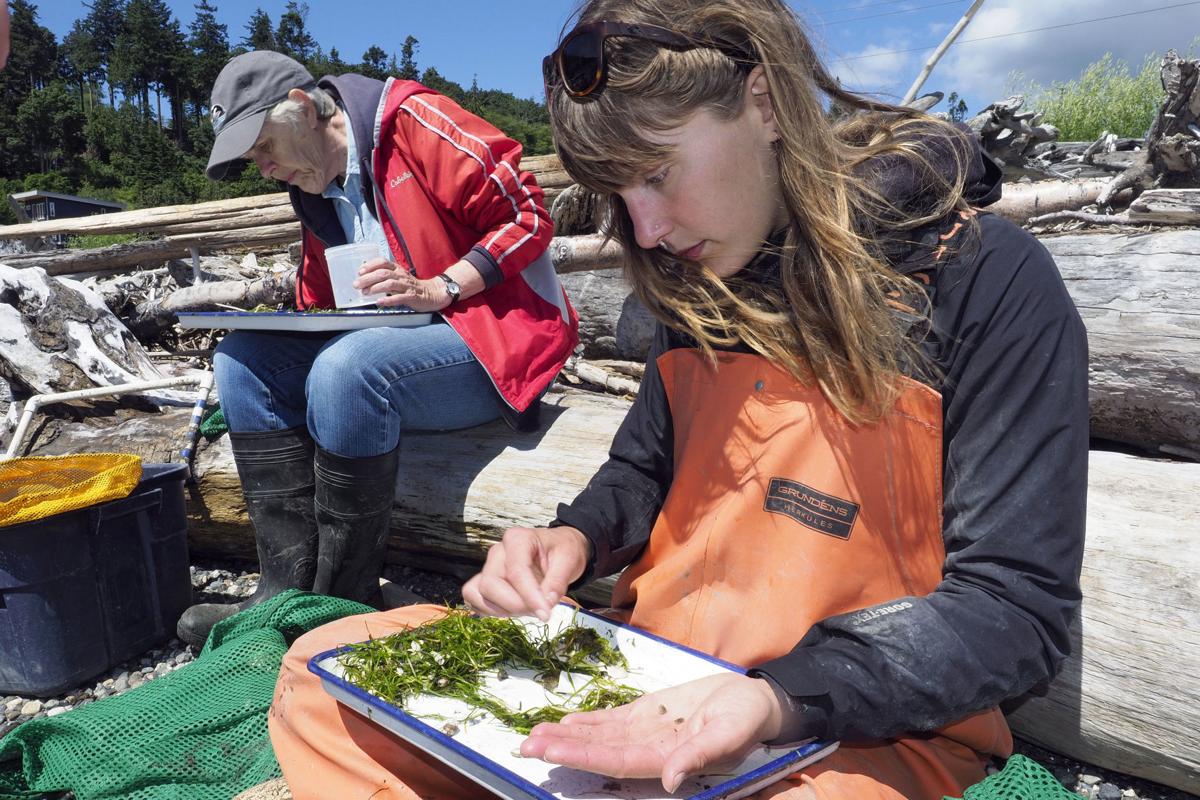 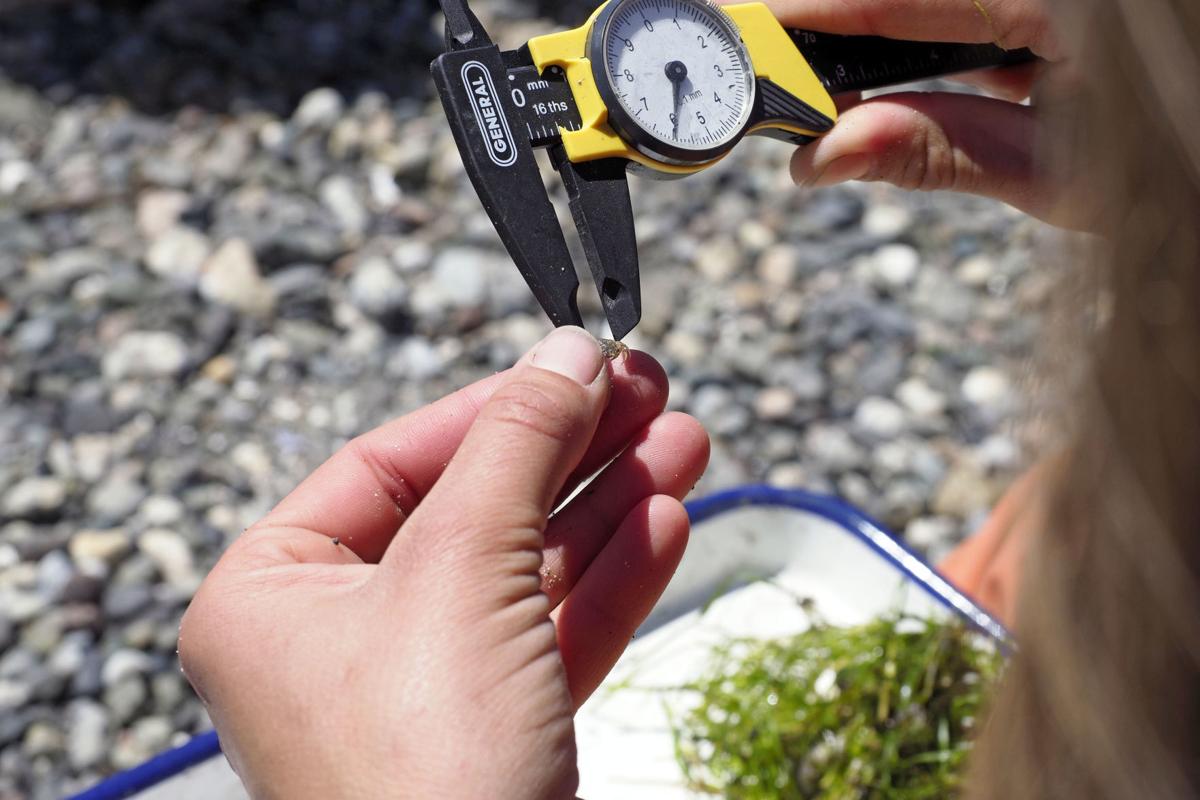 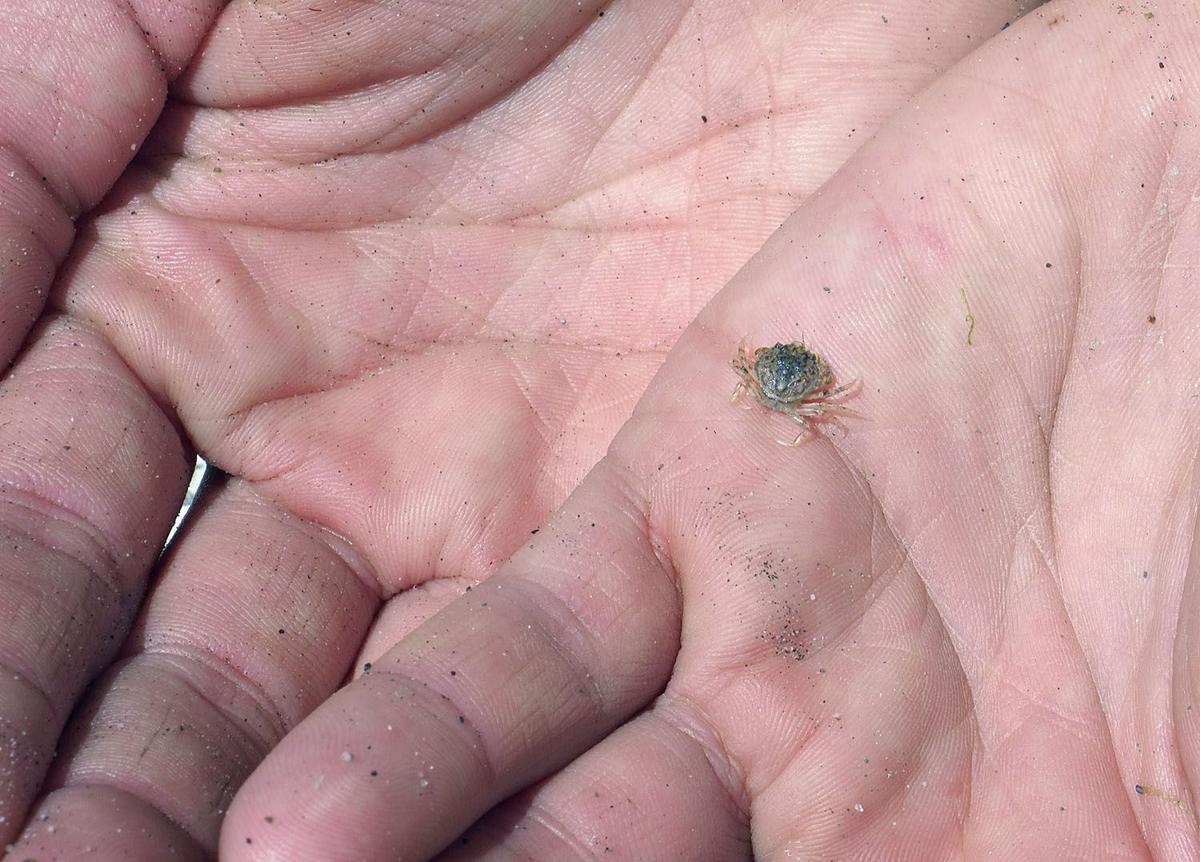 Swinomish fisheries technician Claire Cook holds a tiny Dungeness crab that was found during a survey of Similk Bay. 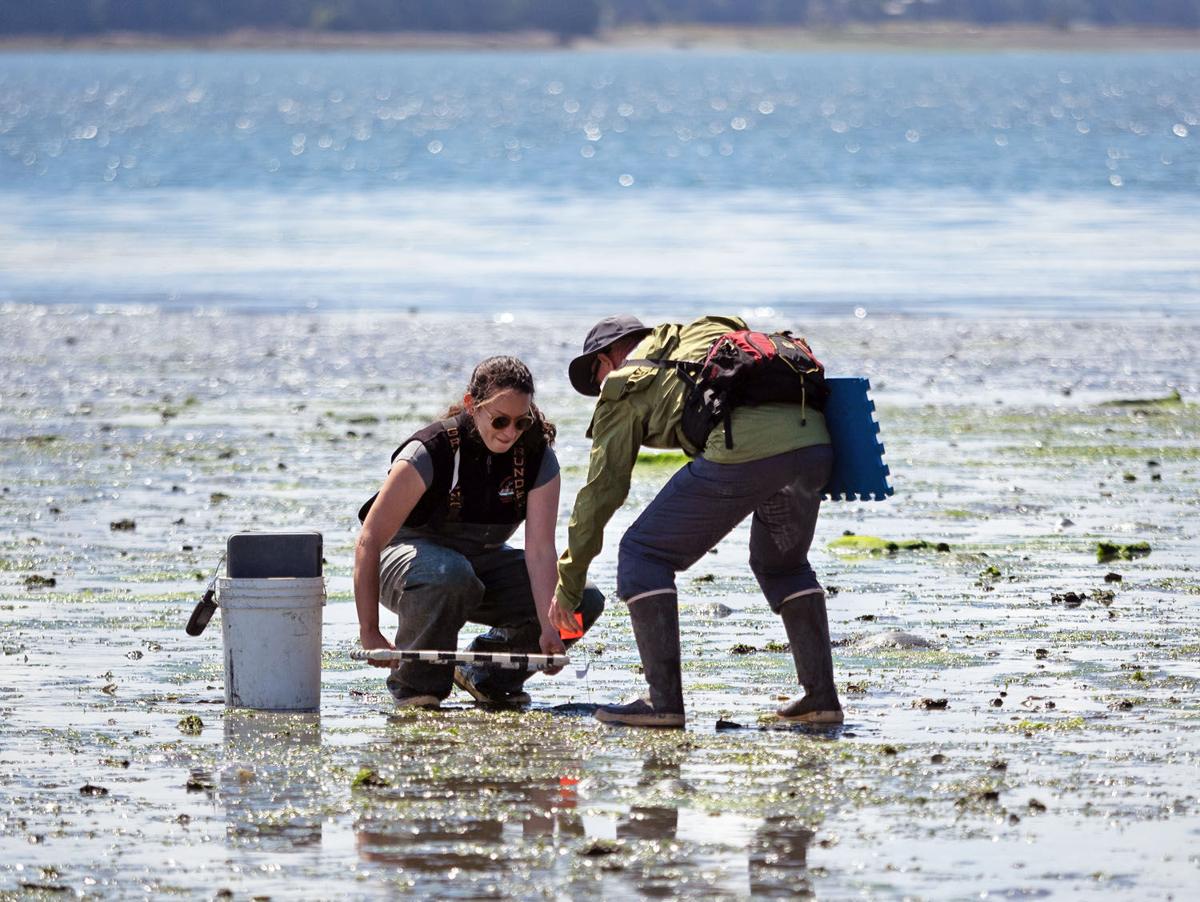 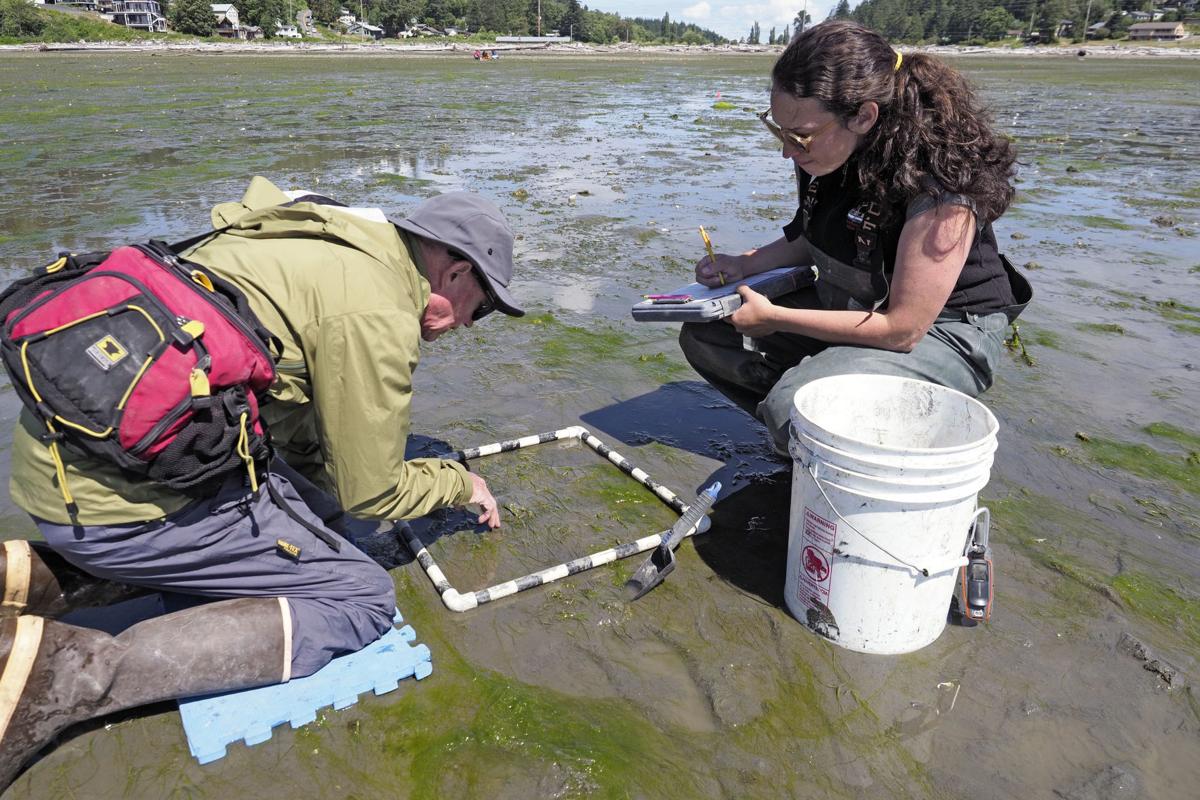 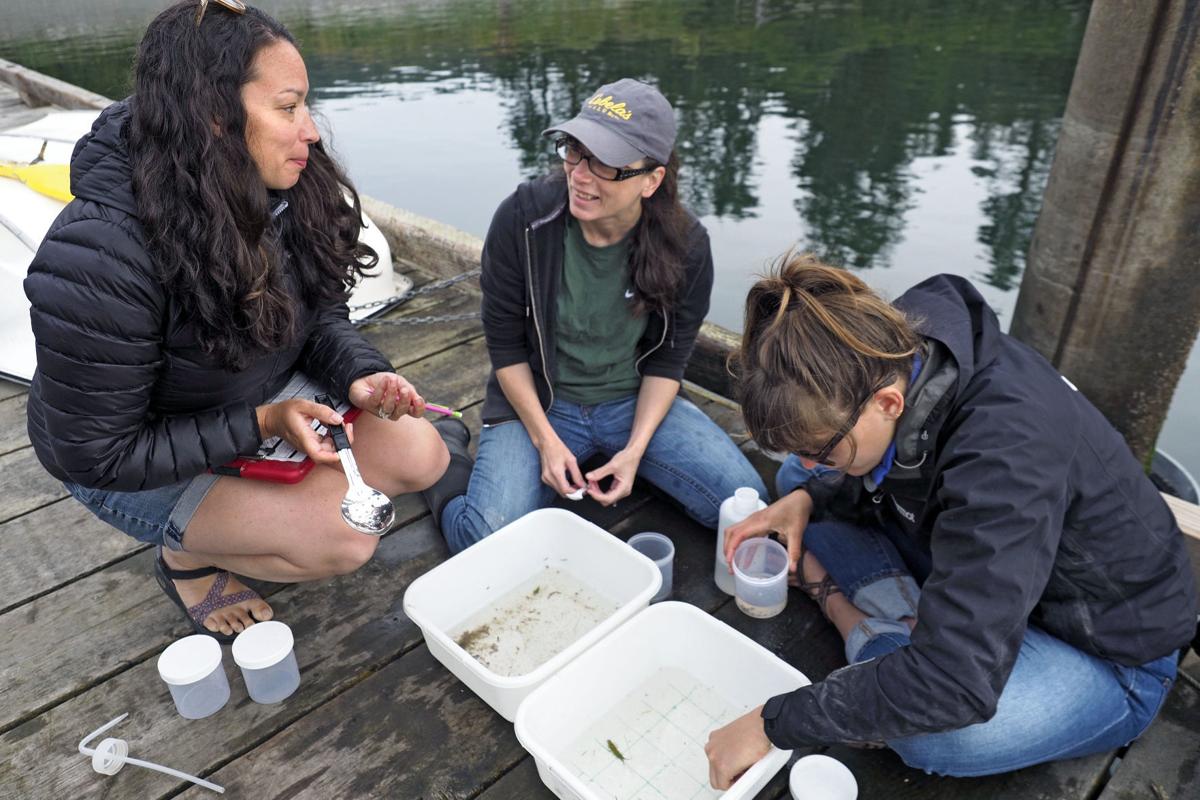 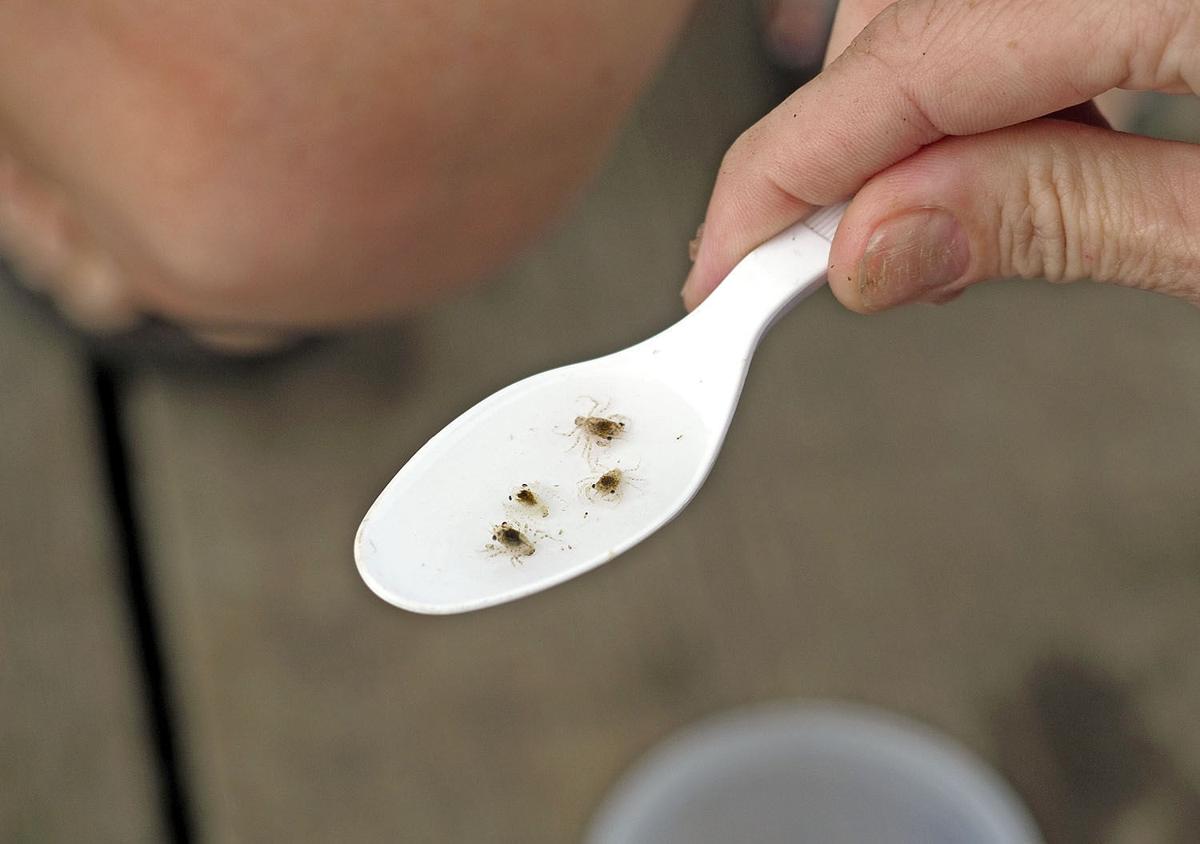 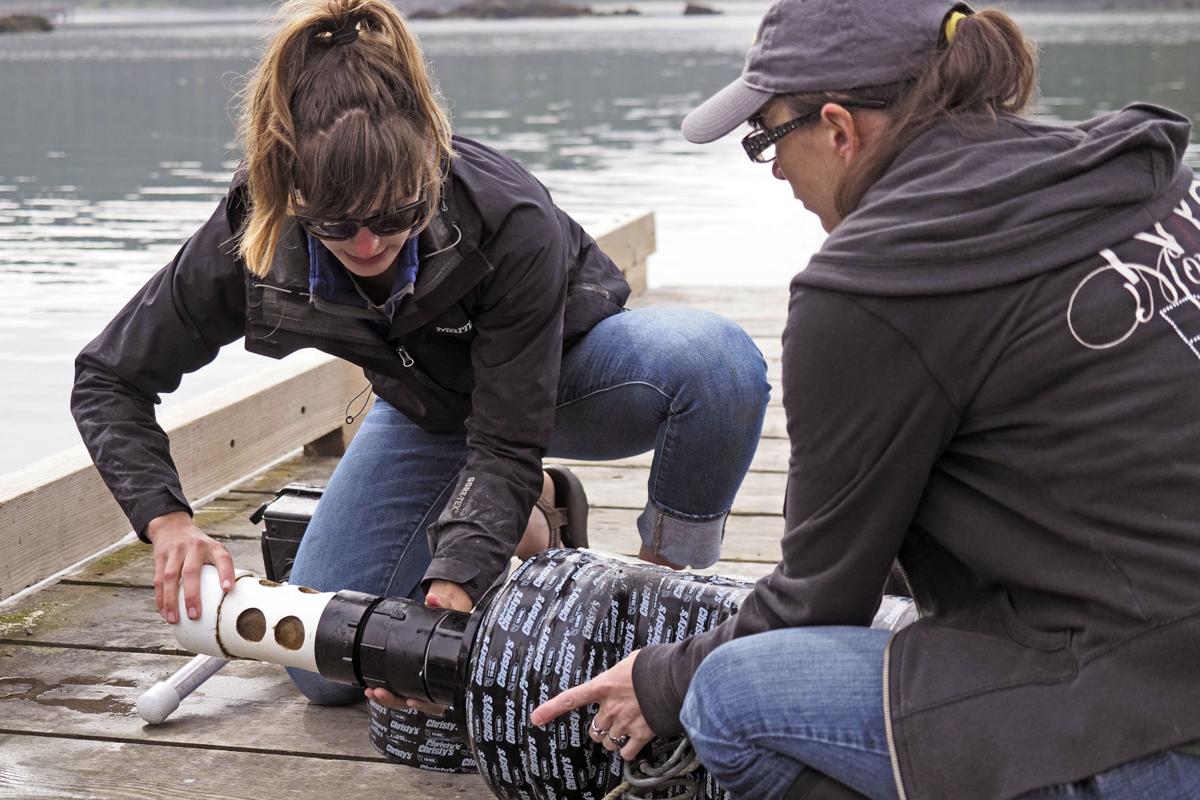 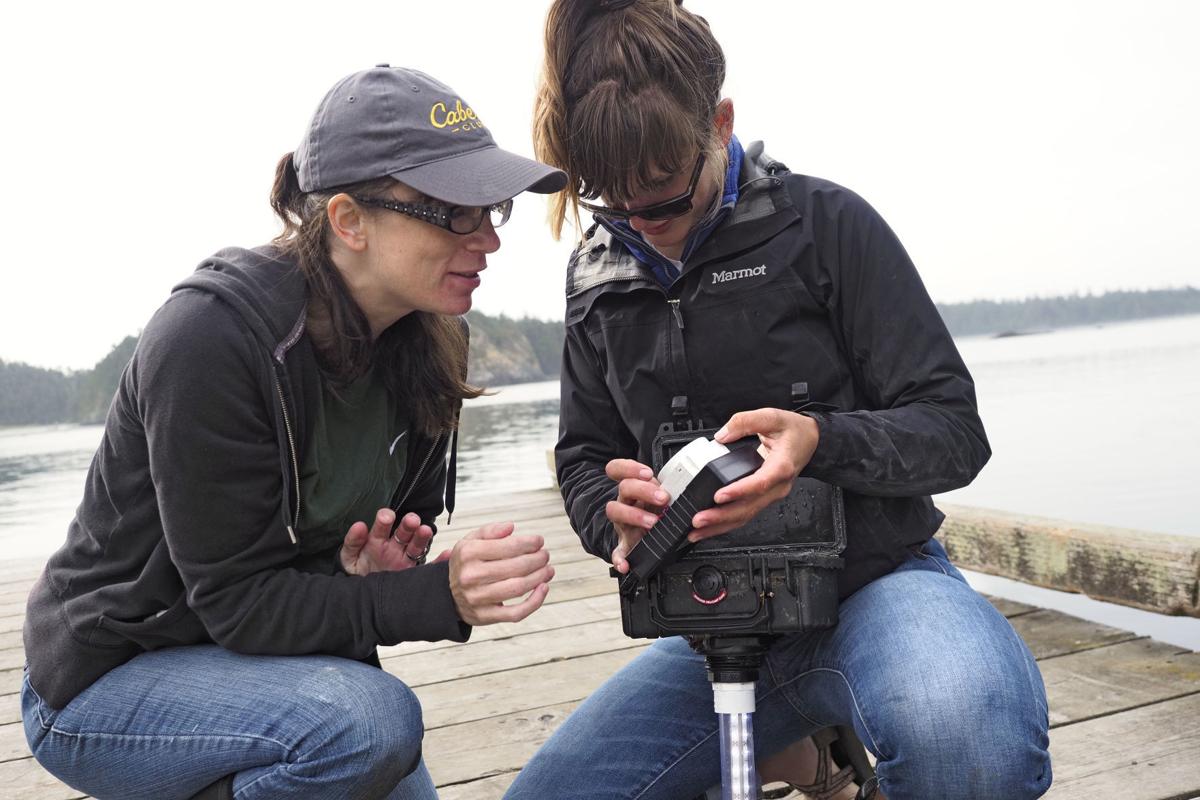 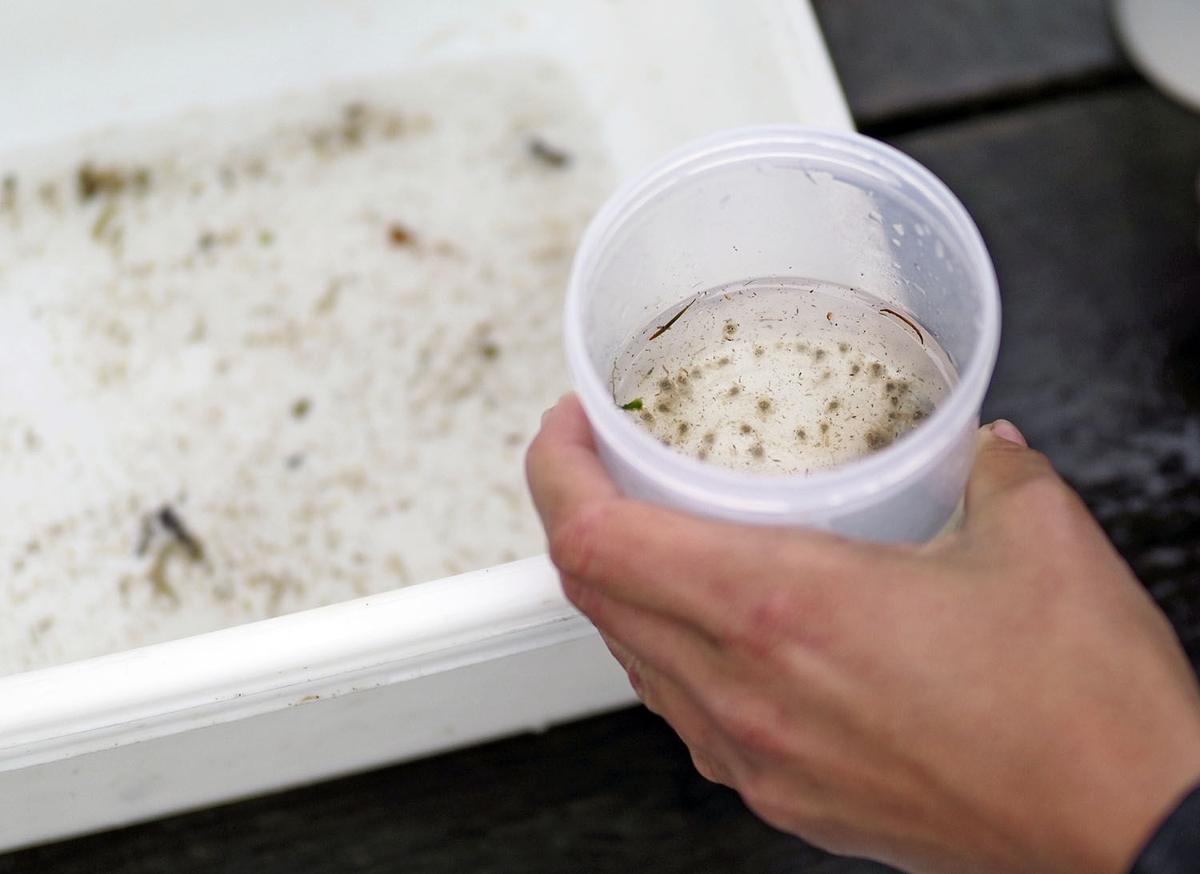 Swinomish fisheries technician Claire Cook holds a cup full of tiny Dungeness crabs before counting them as part of a survey Wednesday at Bowman Bay.

Swinomish fisheries technician Claire Cook holds a tiny Dungeness crab that was found during a survey of Similk Bay.

Swinomish fisheries technician Claire Cook holds a cup full of tiny Dungeness crabs before counting them as part of a survey Wednesday at Bowman Bay.

FIDALGO ISLAND — Before winding up on a dinner plate alongside melted butter, Dungeness crabs pulled from the depths of Puget Sound or Washington’s coastal areas spend several months smaller than a thumb tack.

Not much is known about how, after emerging from eggs, the tiny crabs settle on area beaches and go on to become the meaty crabs prized in Washington and beyond.

“There’s just not a lot known about the early life history stages of Dungeness crabs in Puget Sound, so we’re starting very basic with: ‘Where are they?’” Swinomish Environmental Specialist Sarah Grossman said. “If in two years we can say that, we will be very happy.”

A long-term goal is to collect enough data to draw connections between the number of months-old Dungeness crabs seen in certain areas and the number of adult crabs caught during commercial harvests.

That type of work has been done on the Oregon coast by Alan Shanks of the University of Oregon and was used to create a forecasting model.

“We’re hoping to develop a model like that, but it’s going to take at least a decade,” Grossman said.

If forecasting proves reliable, it could be used to influence management of the Dungeness crab fishery.

“Dungeness crab are culturally significant to the Swinomish Tribe, and it’s also our most economically valuable fishery,” Swinomish Fisheries Manager Lorraine Loomis said in a Northwest Indian Fisheries Commission news release about the program. “With crab harvest increasing across the region, we need to know more about juvenile crab survival so we can continue to manage the resource sustainably.”

With the help of citizen science volunteers trained through the Salish Sea Stewards program and Mary Valentine, a marine biology student doing undergraduate research through Western Washington University, Cook and Grossman are monitoring six area beaches from May through September.

Near three of those sites, they are also using a type of trap that uses light to attract young crabs.

On the beaches, they pick through rocks, mud and algae in search of tiny Dungeness crabs. They also check the traps for young crabs, including some so small they haven’t yet taken on a crab-like appearance.

In Bowman Bay, they found 156 young Dungeness crabs when they emptied a trap Wednesday.

Beaches at Bowman Bay, Similk Bay and four other sites were selected for the project based on earlier research by marine scientist Paul Dinnel, who found that Dungeness crabs in the area appear to prefer beach habitat where eelgrass or algae-covered rocks are present.

Grossman said that eliminated beaches with bare sand, mud or rock from the list of potential monitoring sites.

After selecting beach sites they thought would attract crabs, Grossman and Cook weren’t sure what they would find.

“I’m so happy Similk is shaping up to be a crabby beach,” Cook said Tuesday after measuring three young Dungeness crabs she found hiding in a tangle of eelgrass.

Grossman said they’ve seen evidence that some of Dinnel’s earlier findings — that Dungeness crab larvae from the coast arrive on area beaches earlier and are slightly larger than those from Puget Sound — hold true where monitoring is being done along Fidalgo and Whidbey islands.

“We’ve only been doing this monitoring two months now and we’ve been able to see that,” she said.

After several months of floating around in the water as larvae, young Dungeness crabs settle among mud or rock in intertidal areas.

There, they crawl under sea grass or algae, or dig themselves into the mud.

“It’s really quite remarkable,” Cook said while digging a layer of mud and eelgrass from a survey plot on the beach at Similk Bay. “Like when you look at this plot right now, I wouldn’t say there are any crabs, but once you dig down just a little bit, you’ll be surprised to find sometimes many.”

This summer, the six beach sites are being monitored every other week. The three light traps are being checked daily.

The plan is to continue the monitoring project seasonally for several years.

“This is our entry level crab research,” Grossman said. “We’re just trying to track their progress in the intertidal zone right now.”

It takes a Dungeness crab about five years to grow from the size of those being monitored this summer to those large enough — at least 6.25 inches wide — for commercial and recreational harvesters to keep, according to the state Department of Fish & Wildlife.

While Dungeness crab is “one of the most important commercial fisheries in Washington” and 9.5 million pounds worth is harvested on average in the state each year, according to Fish & Wildlife, there is no stock assessment for the fishery.

That means, according to National Oceanic and Atmospheric Administration Fisheries, that unlike for salmon, there is no population estimate for Dungeness crab to gauge how much harvest is sustainable.

The survival rate for young Dungeness crabs is also unknown, so how many of the thousands seen this summer will make it to the size where they can be caught is part of what the monitoring project may eventually be able to answer.

“There are a lot of questions about where they might end up,” Grossman said.