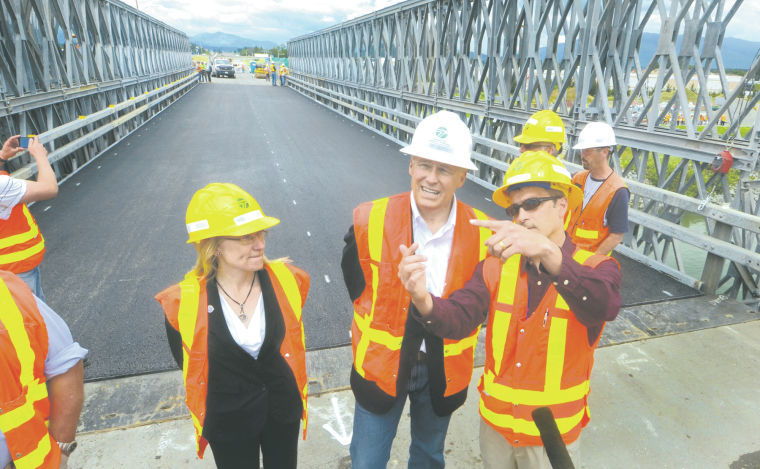 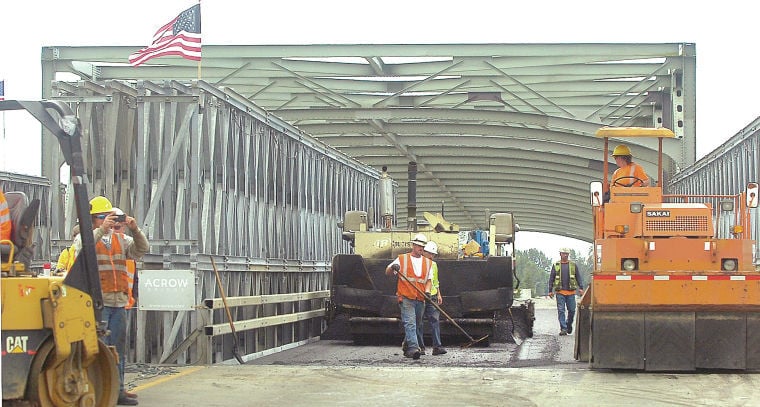 The final stretch of asphalt is put down Tuesday on the north end of the southbound lane of the temporary Interstate 5 Skagit River Bridge span.

The final stretch of asphalt is put down Tuesday on the north end of the southbound lane of the temporary Interstate 5 Skagit River Bridge span.

BURLINGTON — The days of driving detours jammed with traffic from a diverted Interstate 5 are expected to end, after state officials announced Tuesday that the temporary span for the collapsed Skagit River Bridge would open early Wednesday.

At an afternoon press conference Tuesday on the north side of the Skagit River, Gov. Jay Inslee thanked construction crews for their quick work, government officials for their leadership and Skagit County citizens for their “minimal consternation” while the temporary bridge structure was being built.

“We wanted to get this bridge up and open as fast as humanly possible, and we did exactly that,” Inslee said.

State Department of Transportation Secretary Lynn Peterson said the bridge would open early in the morning, though she declined to give an exact time.

For many people who have ended up in long traffic backups on area roadways and detour routes not set up to handle the sudden influx of traffic, the temporary bridge fix couldn't come soon enough.

Since the collapse, an estimated 71,000 vehicles per day have been diverted from the highway to local roadways. Local businesses have reported up to an 80 percent drop in sales, thanks to the traffic detours.

Melissa Fanucci, senior planner of the Whatcom Council of Governments, said total trade that crosses the Skagit River Bridge to and from Canada is an estimated $13.9 billion per year.

While many were expecting another days-long outage of Interstate 5 in September when the temporary bridge will be replaced with a permanent span, the president of the general contractor that won the bid to build the permanent structure said Tuesday that people shouldn't have to wait long at all for the span to be installed.

Max J. Kuney Construction of Spokane was selected out of four contractors that bid to build the permanent span.

Company President Max Kuney said his company’s bid includes only 12 hours to switch out the temporary span with the permanent structure and reopen the highway.

He said the concrete girder-style bridge will be built parallel to the temporary bridge on the eastern side. Lynn said barges will move the temporary span upriver and his bridge into place.

Jay Drye, DOT assistant regional administrator, said the work to switch the temporary and permanent bridges will begin on Sept. 4. Drye said bids include the cost of construction, plus $660,000 per day the highway will close while the sections are swapped.

Kuney said the bid is for $6.875 million, not including the 12 hours he expects for the swap.

A May 25 press release from the governor's office estimated the permanent span would cost $15 million. The federal Department of Transportation has set aside $15.6 million in emergency funds to build the temporary and permanent spans.

Peterson said Tuesday the temporary span is being leased for approximately $2 million.

On Tuesday, crews worked to finish paving the steel plate surface of the temporary bridge while the conference took place.

Peterson said all permitted traffic — excepting oversize and overweight loads — will be allowed on the bridge. Speeds will be limited to 40 mph between the George Hopper exit off Interstate 5 in Burlington and the College Way exit in Mount Vernon as cars pass over the temporary span.

According to a news release from the DOT, the lanes on the 160-foot temporary span will be 11 feet wide with 1-foot shoulders. The rest of the bridge has 12-foot-wide lanes and three-foot shoulders.

Inslee again thanked the first responders to the scene who helped keep injuries to a minimum after the collapse, and gave his condolences to the family of Trooper Sean O’Connell, who died May 31 while directing traffic in Conway.

“Of course, our thoughts and prayers are still today with the family of Trooper Sean O’Connell, who was helping assure the safety of citizens on the detour, following this collapse,” Inslee said.

Kristen Keltz, president and CEO of the Mount Vernon Chamber of Commerce, said in a personal interview that she was excited for the temporary bridge to open and get truck and freight traffic off local roads.

“I certainly believe it will be a positive impact for our businesses, as we’re getting up to 6,500 semi and box trucks off our arterial streets and back up on to the highway,” Keltz said.