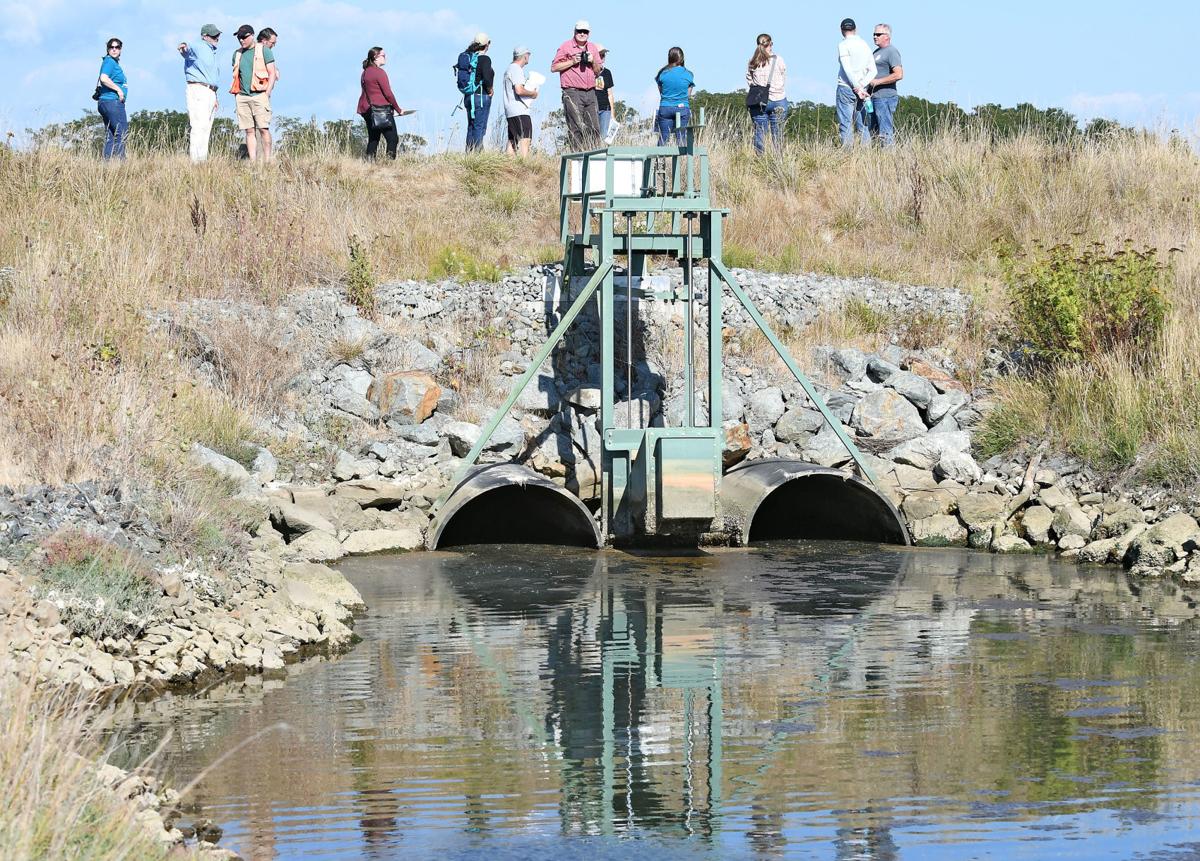 A tour group led by Skagit River System Cooperative Director of Habitat Restoration Steve Hinton stops Monday along the west side of the Swinomish Channel next to a tide gate. 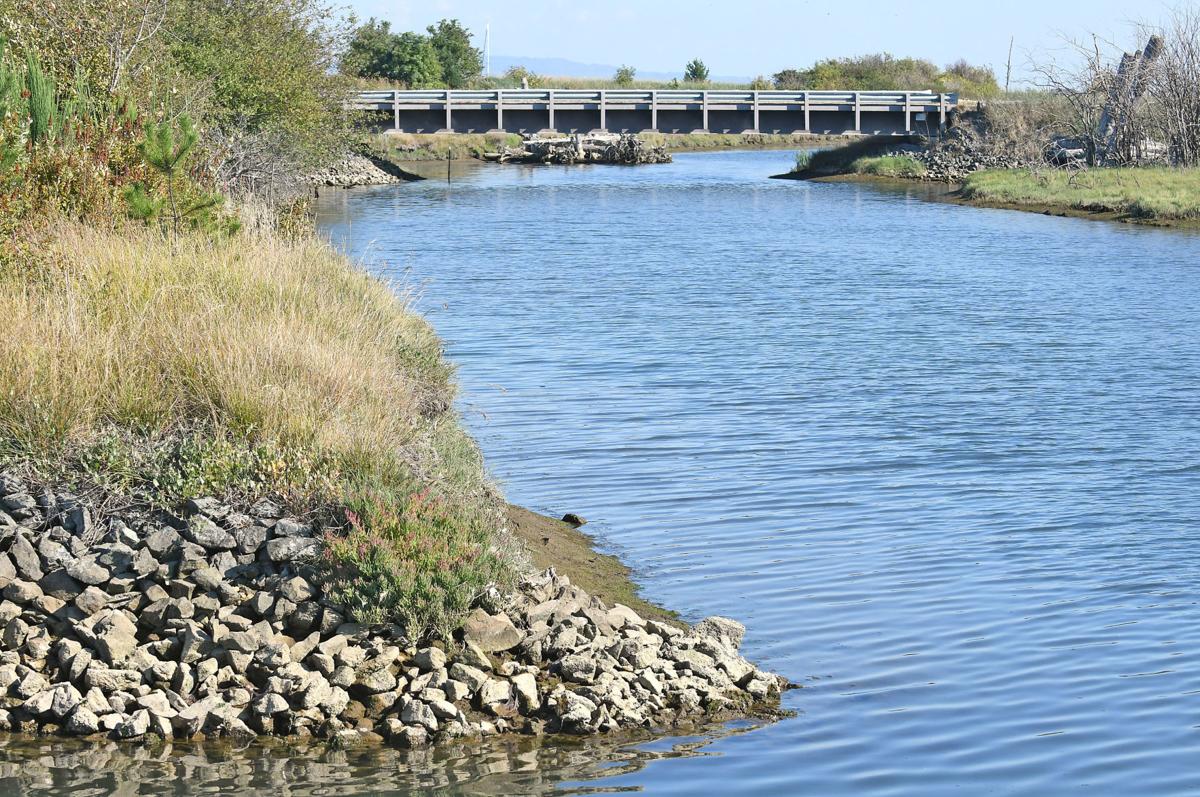 Freshwater and saltwater mingle next to agricultural land west of the Swinomish Channel. Efforts to enhance fish habitat include a proposed dike setback south of the bridge in the background. 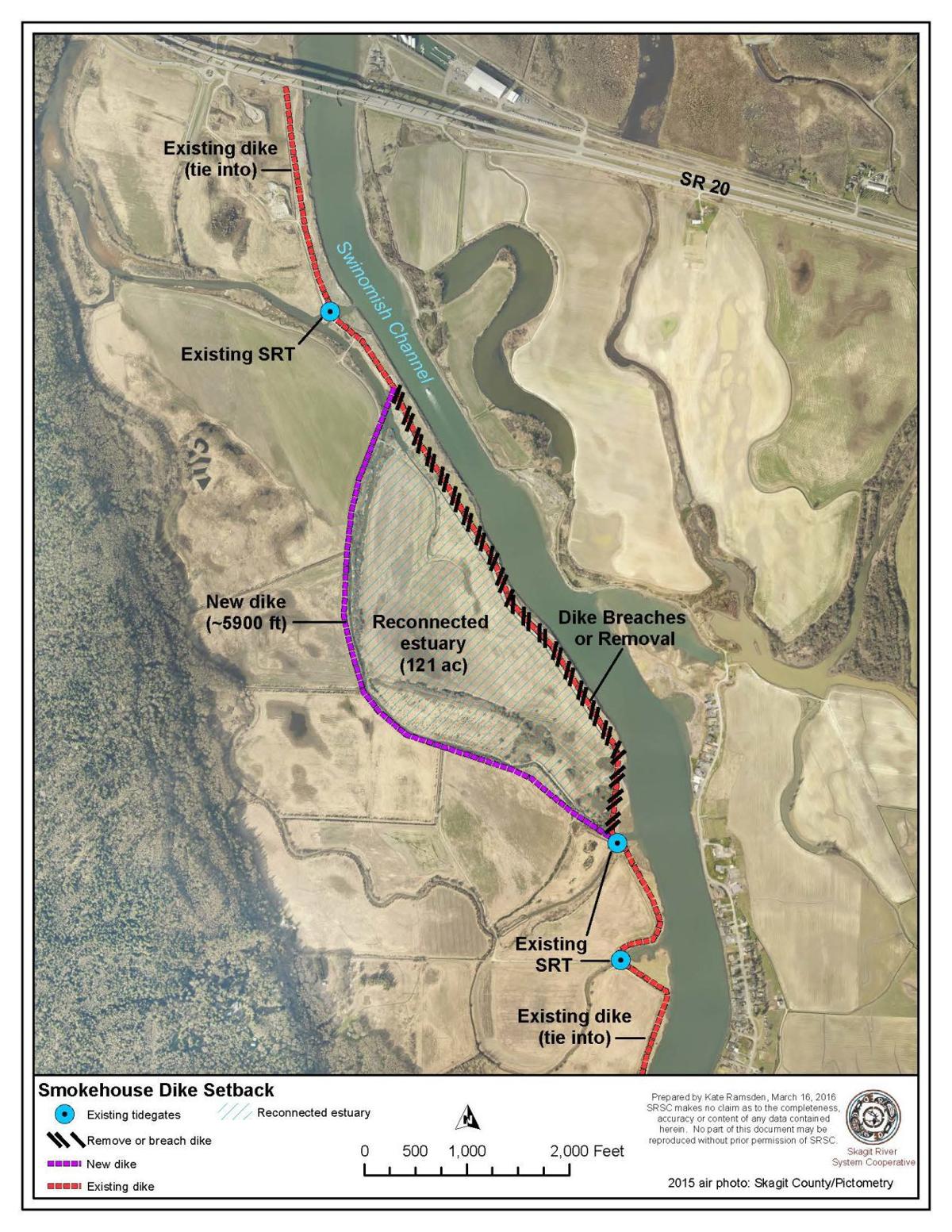 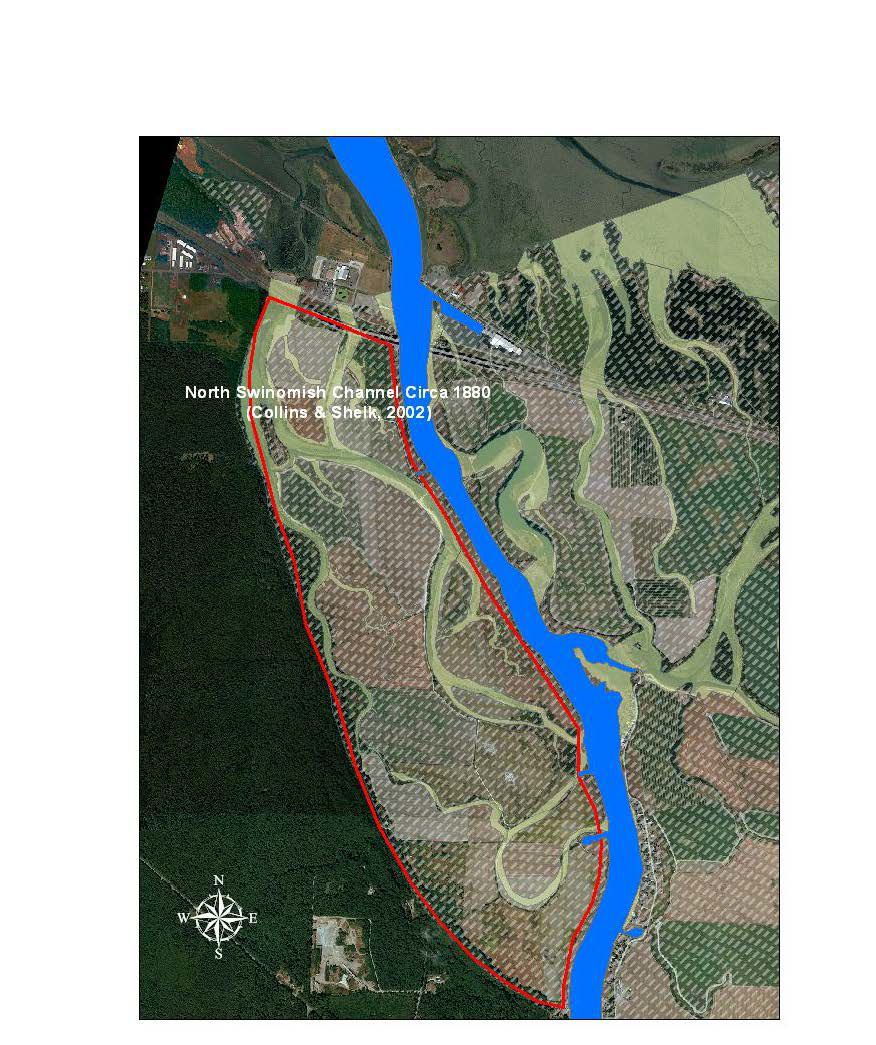 A tour group led by Skagit River System Cooperative Director of Habitat Restoration Steve Hinton stops Monday along the west side of the Swinomish Channel next to a tide gate.

Freshwater and saltwater mingle next to agricultural land west of the Swinomish Channel. Efforts to enhance fish habitat include a proposed dike setback south of the bridge in the background.

SWINOMISH CHANNEL — As several boats made their way Monday down the Swinomish Channel, a group walked along its western bank, reminiscing about the channel’s days as a meandering arm of the Skagit River.

“What’s now the Swinomish Channel was one of the many channels to the Skagit River,” Swinomish Indian Tribal Community archeologist James Harrison said. “This is a huge braided delta.”

The channel that extends from near March Point to La Conner had several interweaving streams before the U.S. Army Corps of Engineers transformed it in 1937 into the straight, deep channel that is relied upon for getting from Padilla Bay to Skagit Bay.

That woven landscape was comprised of many tidal marshes and was historically a destination for tribal fishermen, Harrison said.

The Swinomish Indian Tribal Community and the Skagit River System Cooperative have plans to set back a section of a 1930s-era dike to reopen 120 acres along the channel’s west side. That will re-create some marshes.

Cooperative Director of Habitat Restoration Steve Hinton led a tour Monday along the channel from beneath Duane Berentson Memorial Bridge to the edge of what may in a few years be the Smokehouse Tidal Marsh project site.

An effort to restore the marsh along the channel for the benefit of salmon has been evolving since the Swinomish Indian Tribal Community purchased 350 acres in the area in 2000.

Work began in 2005 and has been progressing since with the replacement of tide gates, the installation of bridges and the planting of streamside trees and shrubs.

Sand was also removed from along the dike near the new tide gates to allow marshes to develop, Hinton said. An estimated 4.2 acres of new tidal marsh is now flourishing in those areas.

“It colonized like that in a couple of years and was pretty remarkable to see,” Hinton said of the marsh.

The tribe’s goal is to open more of that marsh in order for the area to support more salmon.

“It’s a string of pearls, of golden habitat opportunities in here,” Hinton said after pointing out a new pocket of marsh and young trees.

The project partners are now asking the state Recreation and Conservation Office for about $500,000 to move on to the next phase of the project — to set back the dike.

The project would involved building 5,900 feet of new dike along a field the tribe leases to a potato farmer, removing some sand in order to allow water to breach the existing dike, and allowing the water from the channel and slough to mix.

“That would essentially re-create some of that marsh habitat,” Hinton said. “Like near the tide gates, but on a much larger scale.”

Endangered chinook salmon are a major focus of the project.

“What this place represents to us from a fisheries perspective ... is rearing habitat for the fish to come in and grow and get some girth before they go out into the ocean,” Hinton said.

The project would also benefit chum and pink salmon, steelhead trout and various forage fish species that salmon eat, according to project documents.

While some potato fields the tribe currently leases for farming would give way to the marsh, others would remain in operation, Hinton said.

One of the major goals of the project is to show that fish recovery and farm preservation can work alongside one another.

“The goal is to see that agriculture and salmon can not only survive, but thrive in the same space,” project documents state.

The work done so far at the Smokehouse Tidal Marsh project site has enabled the marsh to recover and farming to continue.

“Farming, almost 17 years later, is active and ongoing,” Hinton said as a tractor moved through a field.

The Smokehouse Tidal Marsh project is also being planned with climate change and sea level rise in mind.

Hinton said the goal is to build the new dike to withstand sea level rise in order to offer long-term protection to the remaining potato fields and the Swinomish tribe’s properties, including the Swinomish Casino and Lodge.

“It’s part of the long-term outlook of the tribe, to consider and adapt to sea level rise ... To get out ahead of it any way we can,” Swinomish Environmental Policy Director Larry Wasserman said.

To build the new dike, the project partners first need funding to complete the design, which is what they’re seeking now. They would also need about $7 million for construction, Hinton said.

He said the project partners expect to know by spring whether the $500,000 they’re seeking in grants is awarded.