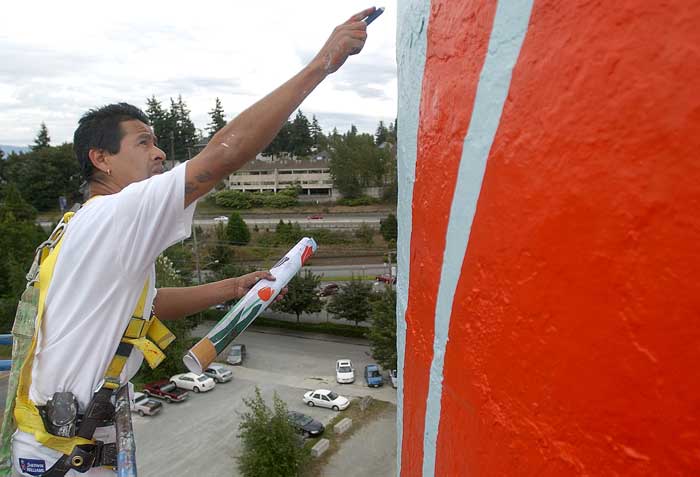 Jose Cardona, 38, of Mount Vernon traces in the stem of a tulip using the design in his left hand on the Tulip Stack on Sunday in downtown Mount Vernon.

Jose Cardona, 38, of Mount Vernon traces in the stem of a tulip using the design in his left hand on the Tulip Stack on Sunday in downtown Mount Vernon.

When it came time to repaint the Tulip stack in downtown Mount Vernon, it was clear what the new design should include.

Months of planning, donations and volunteers culminated this past weekend when the 90-foot iconic landmark was painted with a new tulip design.

The paint job caps several months of questioning whether the stack would even remain standing, let alone be aesthetically restored. After pieces of the old Carnation condensery smokestack began crumbling in December, falling into the parking lot of the office building and damaging at least one vehicle, city officials questioned the tower’s structural soundness. Engineering analysis suggested the tower be demolished or cropped. The owners of the tower, the Potin Revocable Trust of Blaine, chose the latter, knocking about 30 feet off the tower in April.

In doing so, the two red tulips adorning the stack were also topped, causing a flaking, deteriorating and bloomless eyesore.

But the trust agreed to let the city and locals help brainstorm ideas to rejuvenate the tower’s appearance, and a tulip motif was chosen to once again grace the landmark.

The two red tulips previously painted on the stack dated to 1987, when the design by Esther McLatchy was chosen by a panel of local judges. The design earned the landmark the moniker of “Tulip Tower” and landed it a place on the logo for the City of Mount Vernon.

In keeping with the history, McLatchy submitted another tulip design after the recent structural work was completed. The Skagit Valley Tulip Festival Board of Directors officially approved the proposal, and Verge helped McLatchy with design and color selection that includes five tulips in various stages of bloom and in red and purple hues, climbing and wrapping around the crown of the tower.

Jose Cardona, owner of Cardona & Sons Painting, volunteered much of the weekend applying the design. He began Friday with the sky-blue base, but had to cut his time short due to rain. That meant long hours Saturday and Sunday, trying to stay ahead of the anticipated rain early this week, he said. He was trying to get as much done as possible on the highest part of the tower before having to return the boom truck provided by Birch Equipment.

Early Sunday morning, Cardona was preparing his five-gallon buckets of bright red and purple paints, donated by Dale Ragan of Karl’s Paints. Cardona had already completed three of the five tulips on the stack, but was preparing to correct the angle of some of the bulbs. Working from a scale drawing by McLatchy, Cardona said it’s challenging to transpose the design onto the three-dimensional, 90-foot tower.

“The drawing is the hardest part,” said the painting contractor, as he craned his neck to gaze up at the tower.

McLatchy was out of town as the painting is took place this weekend. But she said that tulips always seemed the natural choice for the tower, reflecting the city’s best-known commodity.