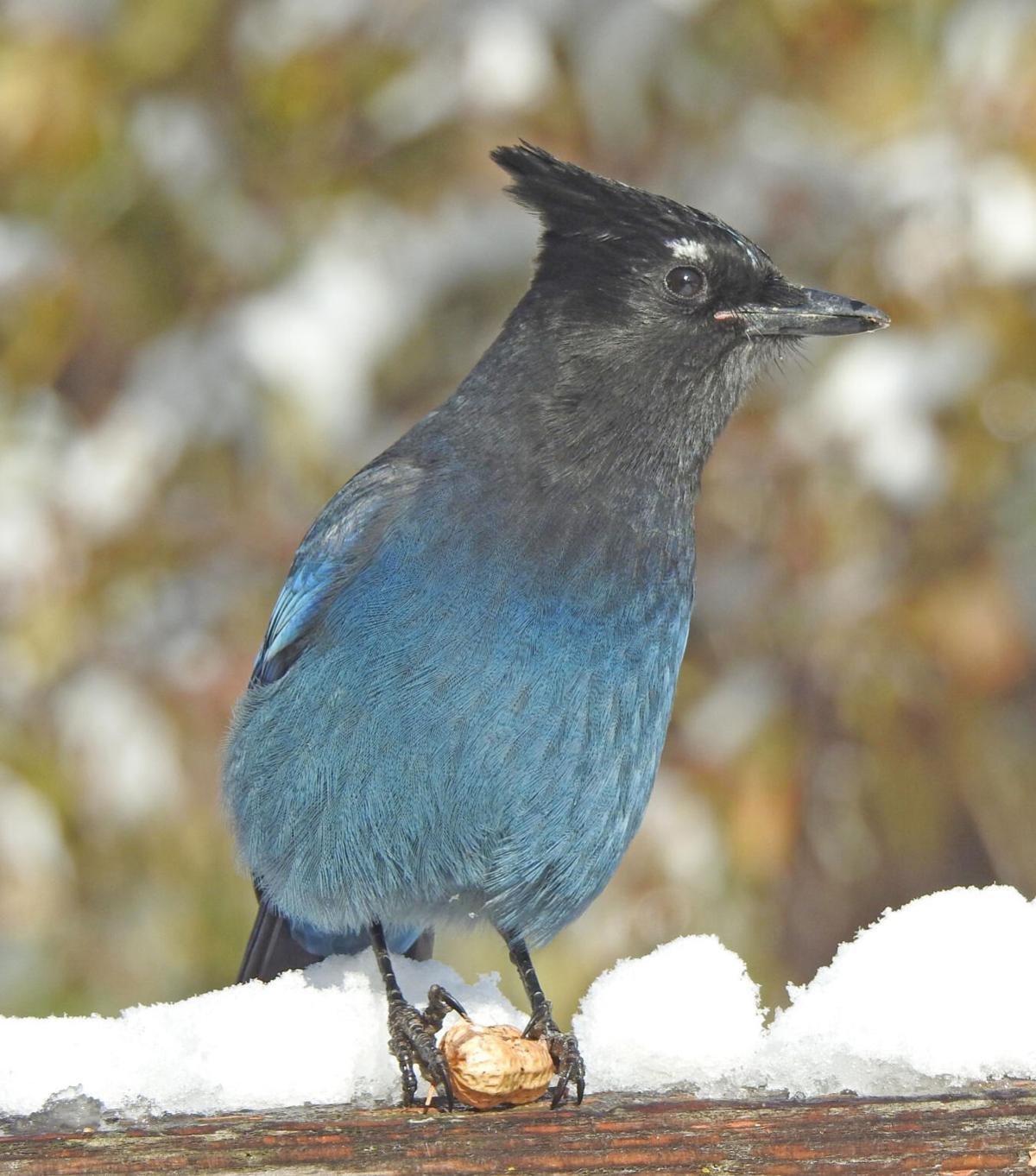 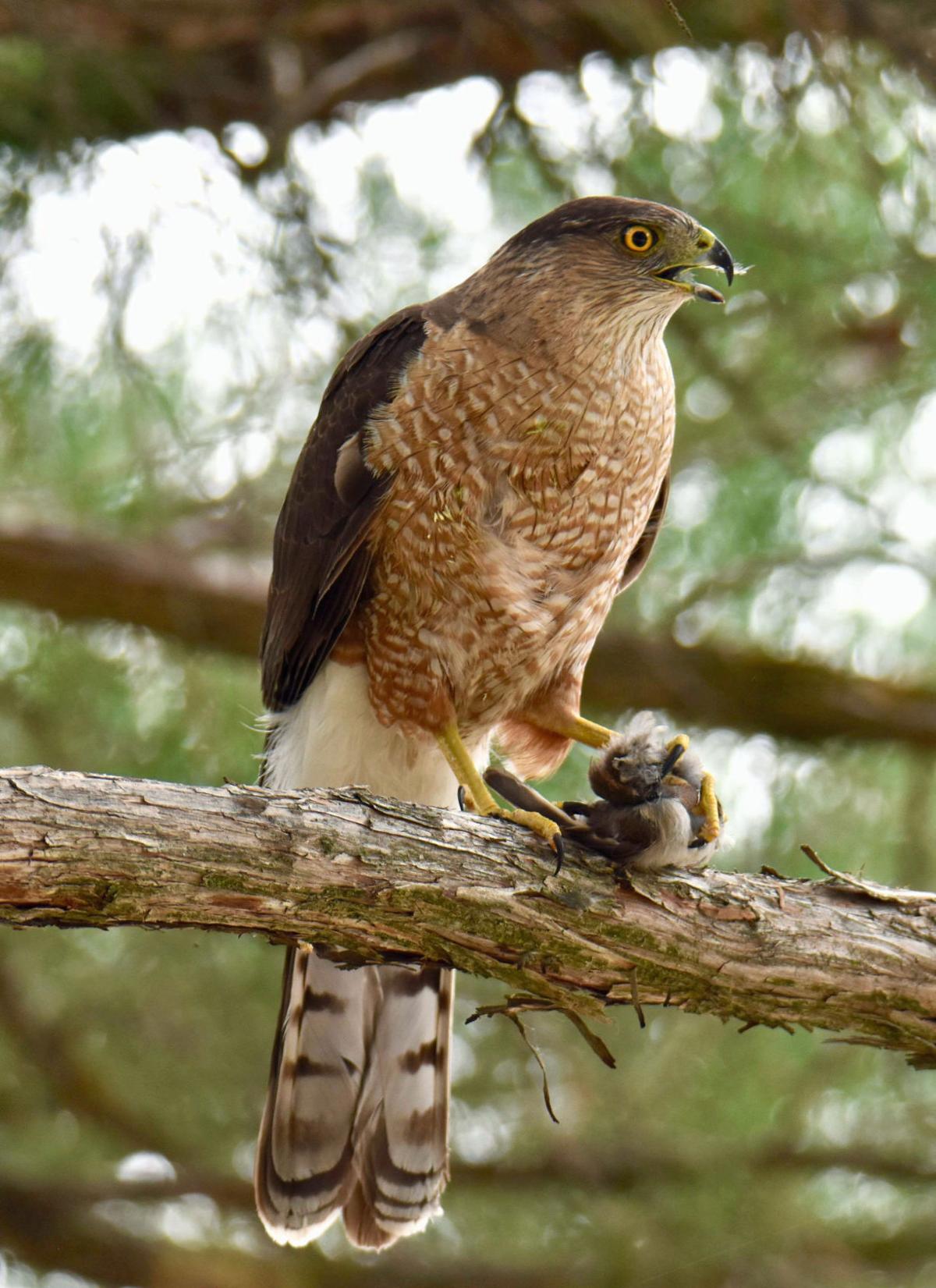 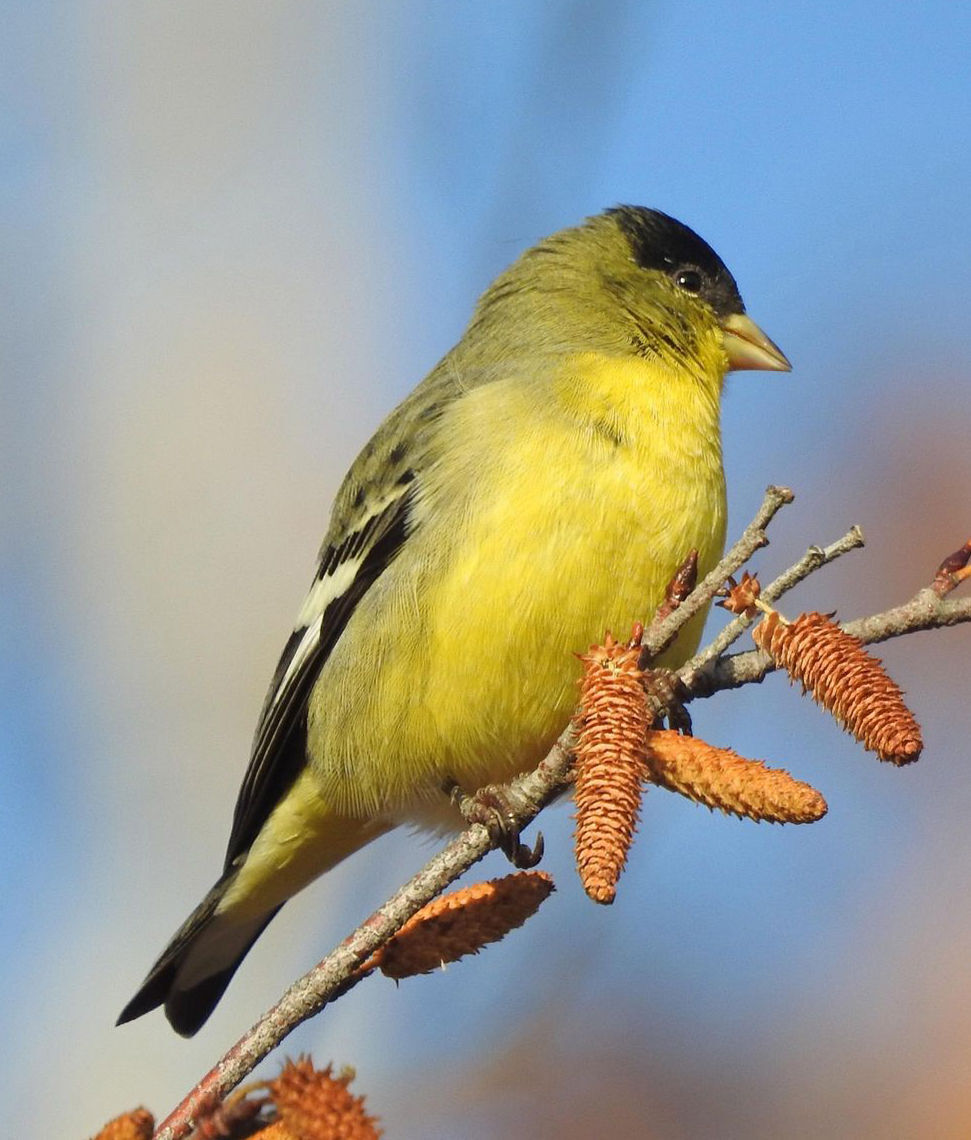 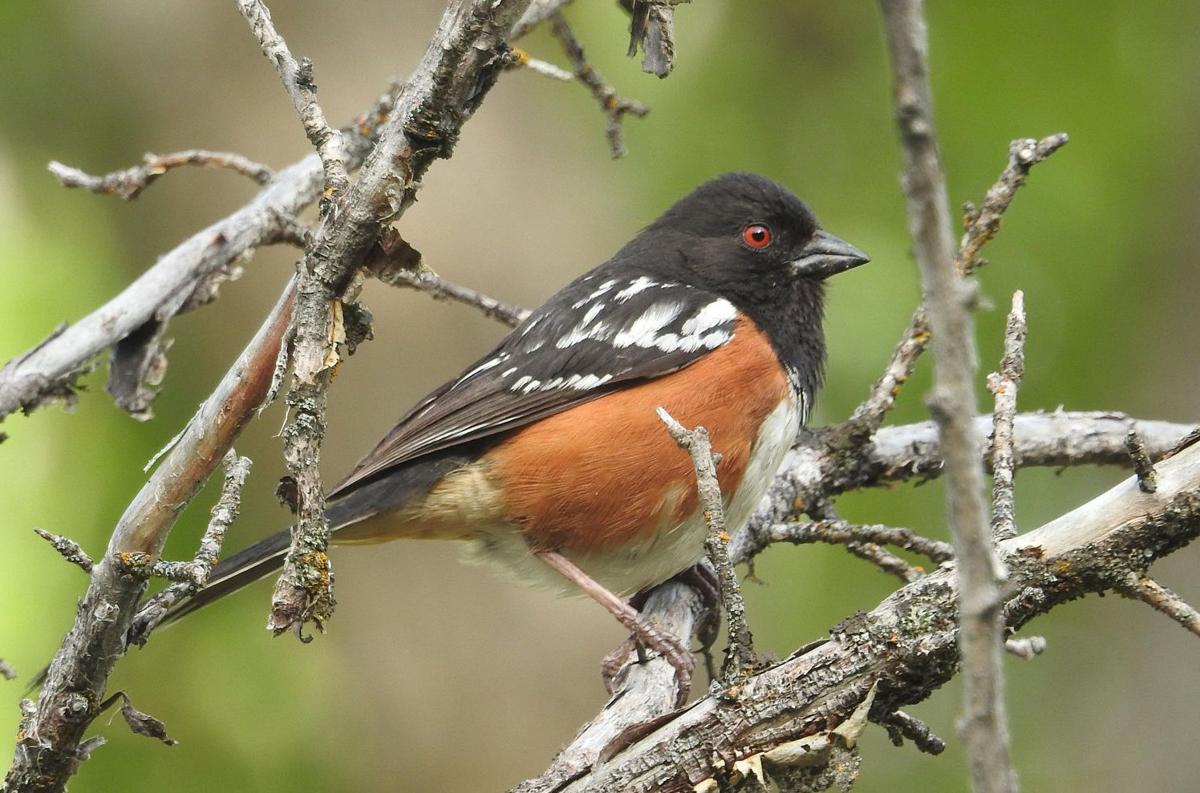 We’ve already looked at the 18 most common birds on feeders in Idaho last winter. These data come from Project FeederWatch, one of many excellent programs at the Cornell Lab of Ornithology. You can visit the FeederWatch website and explore population trends of these bird species and many others at feederwatch.org.

No. 19 in Idaho last winter was the sharp-shinned hawk. This is the first species in the top 25 that comes to yards with feeders, not for the bird seed, suet, and peanuts, but rather for the first 18 species on the list. Sharpies are bird predators. They have short, broad wings, and long tails, evolved for pursuing tricky little fleeing birds through shrubs and tree branches. I’ll write more about birds who eat birds in a few weeks.

Sharp-shinned hawks are one of many species that breed at higher elevations in Idaho forests and then migrate south and down slope for the winter. They present a nice little identification puzzle because they are so similar to No. 21 on the list, Cooper’s hawk. Coops are larger versions of sharpies, also evolved to eat other birds.

I talked about sexual dimorphism in plumage in the Jan. 6 Idaho feeder birds: Part IV column. With sharp-shinned hawks, Cooper’s hawks, and other birds of prey, the dimorphism is more subtle. Females look like males, but they are a little larger. This size difference can be difficult to detect when you just get started in birding. For these two species, the identification puzzle is increased because larger females of the smaller sharp-shinned hawk overlap in size with smaller males of the larger Cooper’s hawk. This overlap is not much, but it means that size, by itself, is not an adequate field mark.

There are many subtle differences in these species, and a quick search of the internet will bring up all sorts of advice. For me, the best field mark is the head. Sharpies have round heads and the dark feathers on the head extend down the nape of the neck like a hood. Coops, on the other hand, have flat heads, and there is a break between the dark cap and a lighter nape. This shows well in a lot of different lighting situations and even at a distance.

Sharpies have been on a slight population decline, according to FeederWatch data, since the winter of 2007-2008. They have been the No. 14 species in six recent winters. The trend for the breeding season is flat, neither increasing nor decreasing.

No. 20 is the lesser goldfinch. This beautiful little thistle seed eater did not even appear in the top 25 until the winter of 2015-2016. Two winters ago, it jumped all the way to No. 17. This shift also shows during the breeding season where there has been an increase of 10% per year. This is a steep upward trend!

Lesser goldfinches, like American goldfinches, are often found in flocks during the nonbreeding seasons. These two species are also found together, especially around feeders. As their name suggests, lessers are slightly smaller than Americans. This is not obvious until you watch a lot of both species under different conditions. Lessers also look less “chunky.”

There are many other subtle differences between these related species. Plumage of both species vary a lot over the course of the year, which contributes to the difficulty of telling them apart. You can visit allaboutbirds.org to check out various field marks and then try them on your feeders or out in the trees. My favorite clue is the lesser goldfinch’s mournful, descending “peeer” call. In my experience, American goldfinches don’t do that. But they are mimics, so beware.

As I already mentioned, No. 21 last winter was Cooper’s hawk. See above for the overlap between Coops and sharpies. Cooper’s hawk only appeared once in the top 25 until the winter of 2015-2016. They are now a regular member of the club and are increasing.

This accipiter has also been increasing in Idaho during the breeding season, although that trend is not significant. Christmas Bird Count data show a steady increase in recent years. More on this bird who eats birds in a few weeks.

The next bird on our list is Steller’s jay at No. 22. Last winter was the first time this species joined the Top 25 Club. We can’t tell by FeederWatch data if this is just a fluke or if they are increasing. I’ll let you visit the Christmas Bird Count site to see what that trend looks like.

I love all jays — they are beautiful, noisy and gregarious, much like my best friends. I hasten to add that some tropical jays are quiet and solitary, very unlike what we’re used to in North America.

Steller’s jay has a loud and distinctive shack shack shack call that carries a long way through the forest. I’ve never had one in my yard, but I always see them when camping in the summer. I’ve put out peanuts this year for the first time in hopes of getting magpies or jays. A blue jay is actually more likely to show up than a Steller’s jay around here. Fun fact — Steller’s jays in the Southern Rockies have white lines in their faces whereas our birds have blue ones.

No. 23 last winter was the spotted towhee. Like Steller’s jay, that was its first winter in the top 25. Christmas Bird Count data show a lot of variation over the last decade but a general increase. I hope this is a real trend because this is a gorgeous bird! This species and the eastern towhee were considered to be the same species, under the name rufous-sided towhee, until it was split in 1995.

The next-to-last bird on this list, at No. 24, was the white-crowned sparrow. This is another species that breeds at higher elevations and that we’re used to seeing and hearing when visiting the mountains in summer. They move downslope in winter, like dark-eyed juncos and several other species, to hang around Treasure Valley yards and open spaces in winter. White-crowns are one of the easiest sparrows to identify. They are relatively large, have unstreaked breasts, and have broadly striped heads. Adults have black and white stripes while young birds have dark brown and light brown stripes.

This sparrow often occurs in flocks in winter. It’s worth taking time to look through all the birds in one of these flocks because they sometimes also include a white-throated sparrow, Harris’s sparrow, or even a golden-crowned sparrow. All of the latter are hard to come by around here.

The final species on this list was the hairy woodpecker at No. 25. This woodpecker looks much like the downy woodpecker and offers another nice opportunity to study the difference between similar species. The best field mark is the length of the bill in relation to the depth of the head. Downy woodpeckers have a small bill relative to the head and hairy woodpeckers a large one. This type of field mark — a proportion — is especially valuable because it doesn’t depend on our ability to judge size per se or what the lighting is.

Hairies are found mostly in the mountains whereas downies prefer the lowlands. They are not altitudinal migrants around here like juncos and white-crowned sparrows. Like mountain chickadees, they mostly stick with their mountain strongholds year-round.

That wraps up last winter’s top 25 feeder birds. We’re about in the middle of the bird feeding season, so it’s not too late to get started if you haven’t yet. Either way, you have enough time to gear up for the Great Backyard Bird Count, to be held Feb. 12-15, 2021. Check it out at birdcount.org.