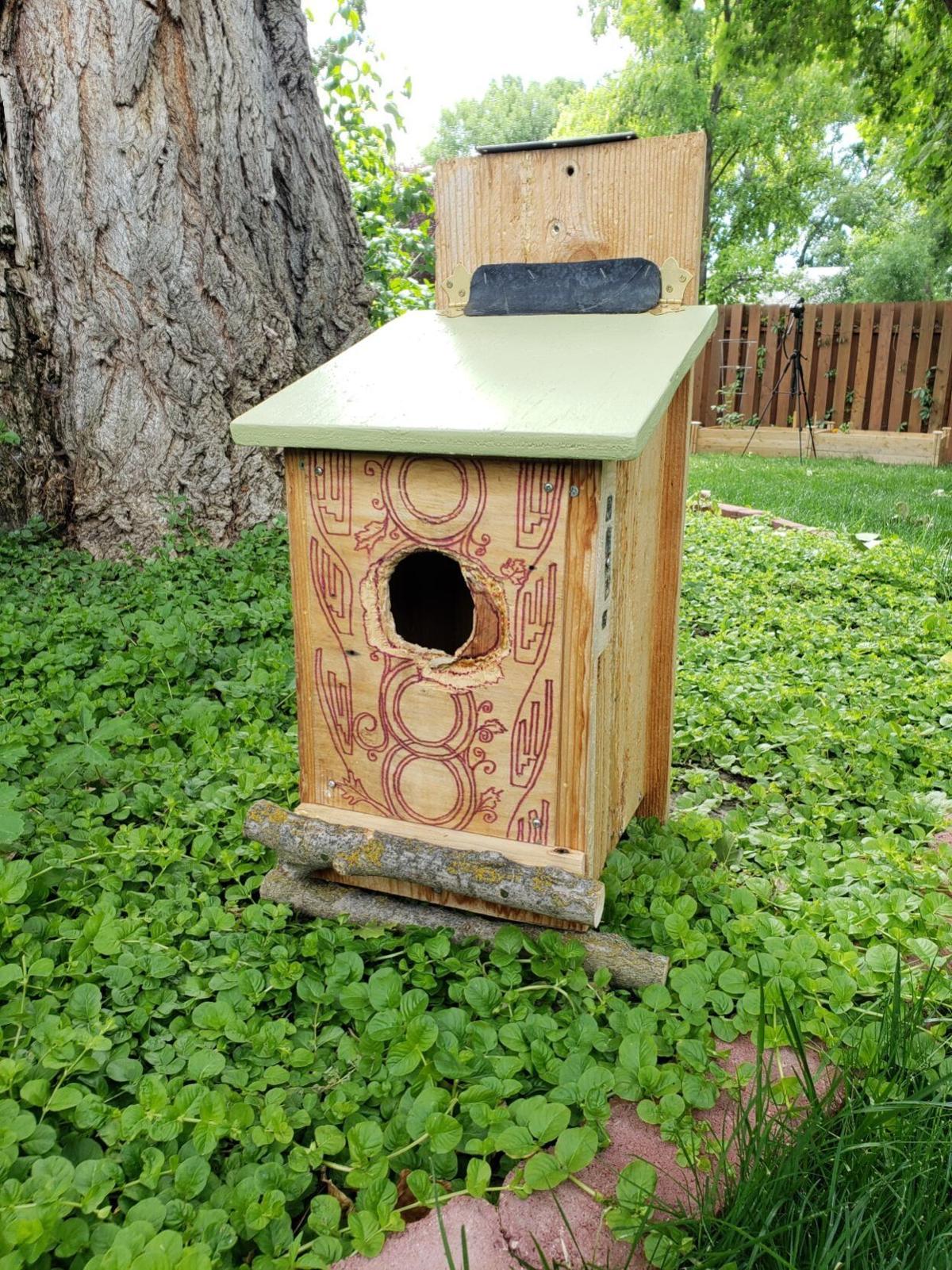 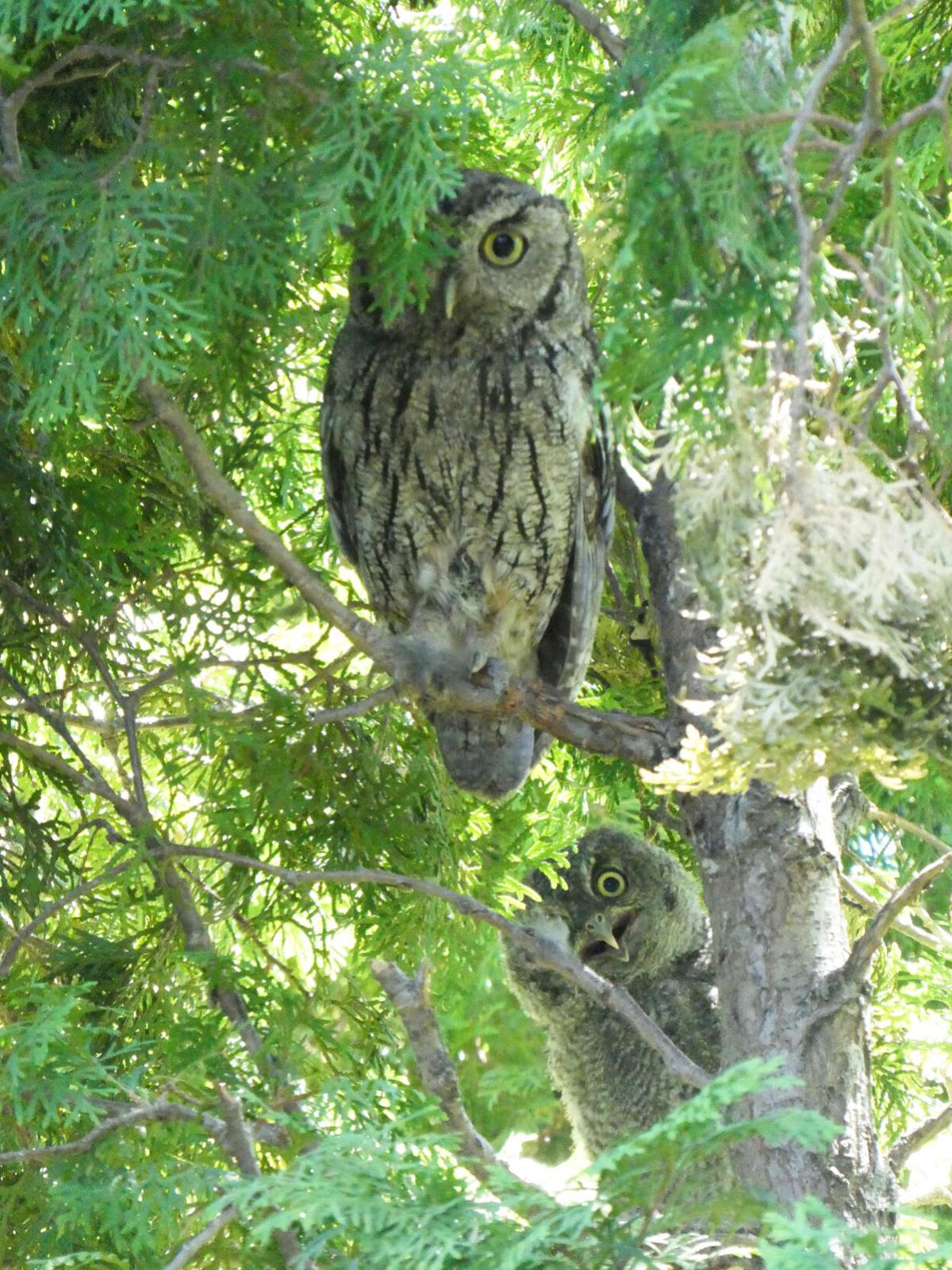 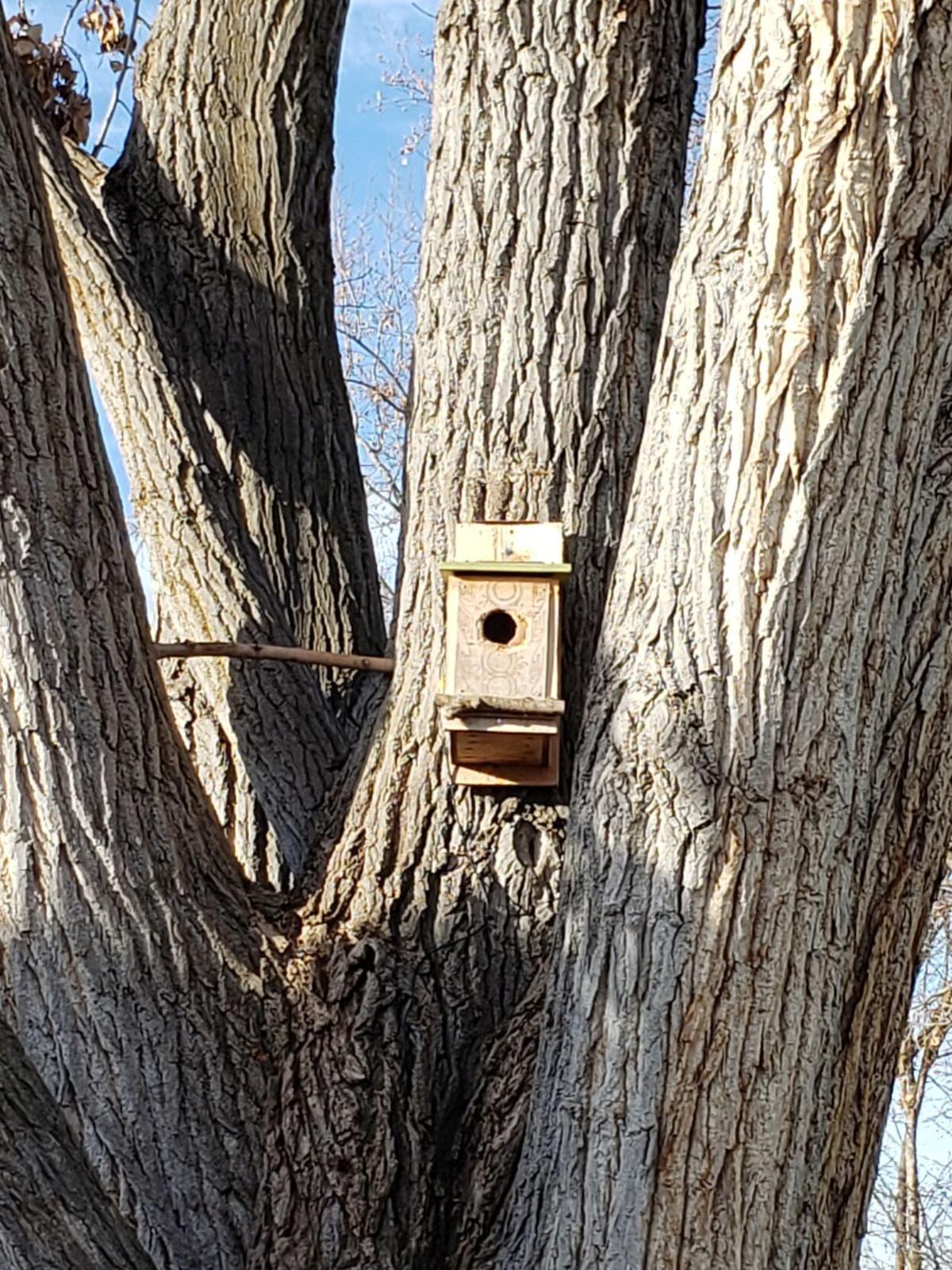 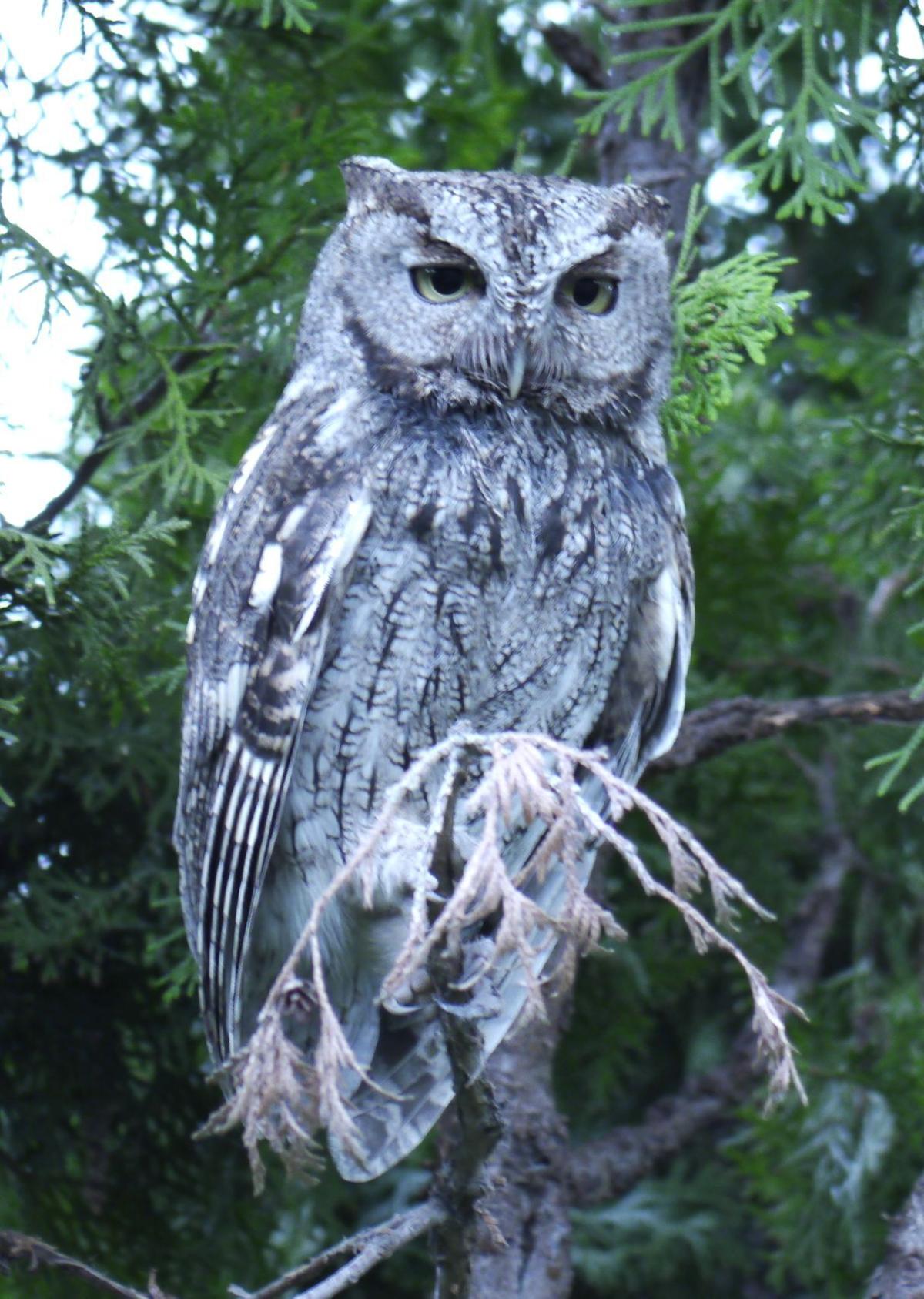 On April 29, 2020, in my column “Owls in the House,” I talked about a small part of our experience with western screech-owls nesting in a nest box in our yard in the spring of 2020. On Jan. 23 of this year, a western screech-owl made its first return to the box (that we know of) while we were eating breakfast. We don’t know if a pair will nest again, but it’s a good time to talk about this species, the box, and the video camera set up. Maybe you can have owls, too.

Thirteen species of owls have been seen in Idaho. These range from the common great horned owl to the rare northern hawk owl. The latter species — more easily seen in the Boreal forests of Canada and Alaska — is so rare here that it falls into categories that only birders talk about.

It’s classified as “casual” in Idaho’s Panhandle during the breeding season. This means there have been only 3-10 accepted records as of 2007, the publication date of the Birds of Idaho Field Checklist. It’s classified as an “accidental” migrant in winter in southwestern Idaho. That means only 1-2 accepted records ever. “Accepted” means that the observations have been approved by Idaho Bird Records Committee. Yes, birders have a process side, with rules. You can see what species are being considered right now at ibrc.idahobirds.net/rare-bird-reports. If you want to play this game, you better have photographs!

Only nine other species of owls have been seen anywhere else in the United States. So, Idaho has a good dose of all the owls available in our country. Our wide variety of habitats is the key.

Although the western screech-owl is small, both the northern pygmy-owl and northern saw-whet owl are a little smaller. The screech is the only one of these three that has “ears.” Owl’s “ears” are really tufts of feathers and have nothing to do with their actual ears, which lie well hidden below their head feathers. It’s fascinating that many species of owls around the world have these tufts, while the majority of other bird species don’t have them.

Nearly all species of owls with feather tufts live in woodlands. Birds of open country — burrowing owls and short-eared owls around here — tend to have smooth heads. Per its name, the short-eared owl literally has short ears. But we typically don’t see them. It’s thought that these feather tufts may play a role in non-verbal communication. You can imagine the silhouette of an owl’s head in the middle of the night in the woods, with those feather tufts showing to a potential mate that it’s an owl, not a stump. This would be especially effective if the individual raised and lowered those tufts.

Another possibility is that the ear tufts better mimic a broken branch while the owl is perched motionless. If you are a little owl in the woods and there are big owls in those woods (great horned owl) looking to eat you, those tufts might have great survival value. With eyes closed and ear tufts up, you can spend the day sleeping in peace. Nothing to see here. As always in evolution, those tufts might serve both purposes and yet others we haven’t figure out yet.

Another interesting feature of screech-owls, including our western screech-owl, the eastern screech-owl of eastern North America, and the whiskered screech-owl of extreme southeastern Arizona and the mountains of western Mexico, is that they don’t screech. The most common vocalization of our western owls is best described as a series of toots, usually accelerating toward the end. It’s not a hoot, like our great horned owls give, either. You can listen to their vocals, including duets between males and females at All About Birds, Xeno Canto, and Birds of the World.

Since last year, we replaced our first nest box with an “improved” one and moved the video camera AV wires from the TV to my PC. I built that box many years ago for a northern flicker. It didn’t have the right specs for a screech-owl, but it obviously worked in 2020. We also had successful owls in that box in 2018, although we didn’t have a video camera that year and missed most of the interesting events. We never did get a flicker, although they checked out the box a few times.

My wife built the new box according to screech-owl requirements. It’s not quite as tall as a flicker box and is both wider and deeper. The family seemed a little crowded last year, so I feel better about that bit. She enhanced the new box with exterior artwork by her and two of our grandkids. Hard to tell if the owls have appreciated that.

Another key addition was the placement of a small (2-inch diameter) tree branch horizontally below the next box entrance. This was a great move as our 2021 owl has perched on that to examine the interior of the box upon each visit so far.

One final improvement on the box design is the placement of a piece of bicycle tire inner tube over the back of the lid where the hinges are. That covers the little gap where rain might get into the interior.

You can find many websites with instructions on the dimensions and other aspects of a screech-owl nest box. It’s not just about the box, but where the box is placed. It should face east to catch the morning warmth of the sun and be shaded in the afternoon to avoid getting too hot.

The video camera we added is from a Hawk Eye HD Nature Cam from Birdhouse Spy Cam (birdhousespycam.com) out of West Linn, Oregon. Before I talk about the camera, let me talk about the service. I called them with questions a few times and talked to a helpful person in each case. How rare is that?

This is a color HD camera, with infrared night vision, a microphone, and a variable focus lens. It has 75 feet of wire, which bundles the audio, video, and power feeds. This was enough wire to run from the box, down our cottonwood tree, under the lawn, around the lower deck, and then into the house.

We first plugged the old-school AV plugs into the back of our TV. After a few weeks, we figured out how to connect the feeds to my PC so that we could shoot photos and videos using the PC’s camera rather than taking pictures of the TV screen. In our blog, The Owls on Peachtree Street, post #13, I go into full detail on how to set this up. You can watch several screech-owl videos in the blog and many more on my YouTube channel, “Bird Talk with Terry Rich.”

Since then, my wife also acquired a WiFi camera from the same vendor. We now have two boxes, so we thought we’d try the WiFi version. The first thing we noticed is that you need a clear line between the camera and the WiFi receiver to get the signal. That is a serious problem. Tree trunks and house walls can block or degrade the signal which limits where you can place the computer receiving the signals.

The second problem is that the WiFi camera we got is not HD. The lower resolution was disappointing after watching the wired HD camera for so long. Also be aware that you still need to run a power cable or arrange battery power for the camera. Keep all these things in mind if you decide to build and box and add a camera. But, believe me, it is well worth it! These owls captivated us for months, an especially welcome addition to our lives in the most forgettable year 2020.

I hope there is more to come on our western screech-owls. But for now, realize that owls are checking out nest sites. If you want a pair of these charming little nightbirds to make spring 2021 even better than it already is, get your saw, hammer, and drill out now. Add a dash of patience, and you’re on your way!