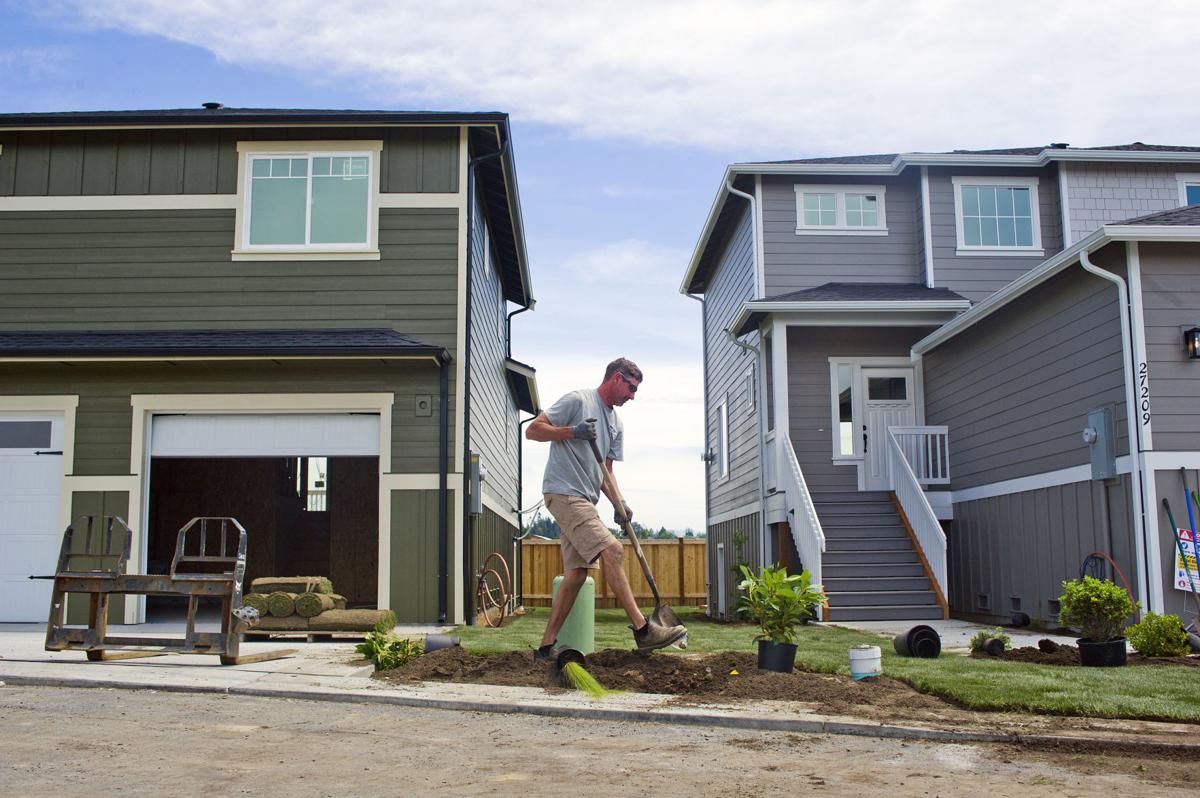 Landscaper Clarance Van Beek of Granite Falls works on the yard Friday, June 19, on a new Stanwood home in the Trailside development near the Stanwood Library. There are 14 homes planned on the nearly 3 acres site at the end of 96th Avenue NW, between the library and Heritage Park. 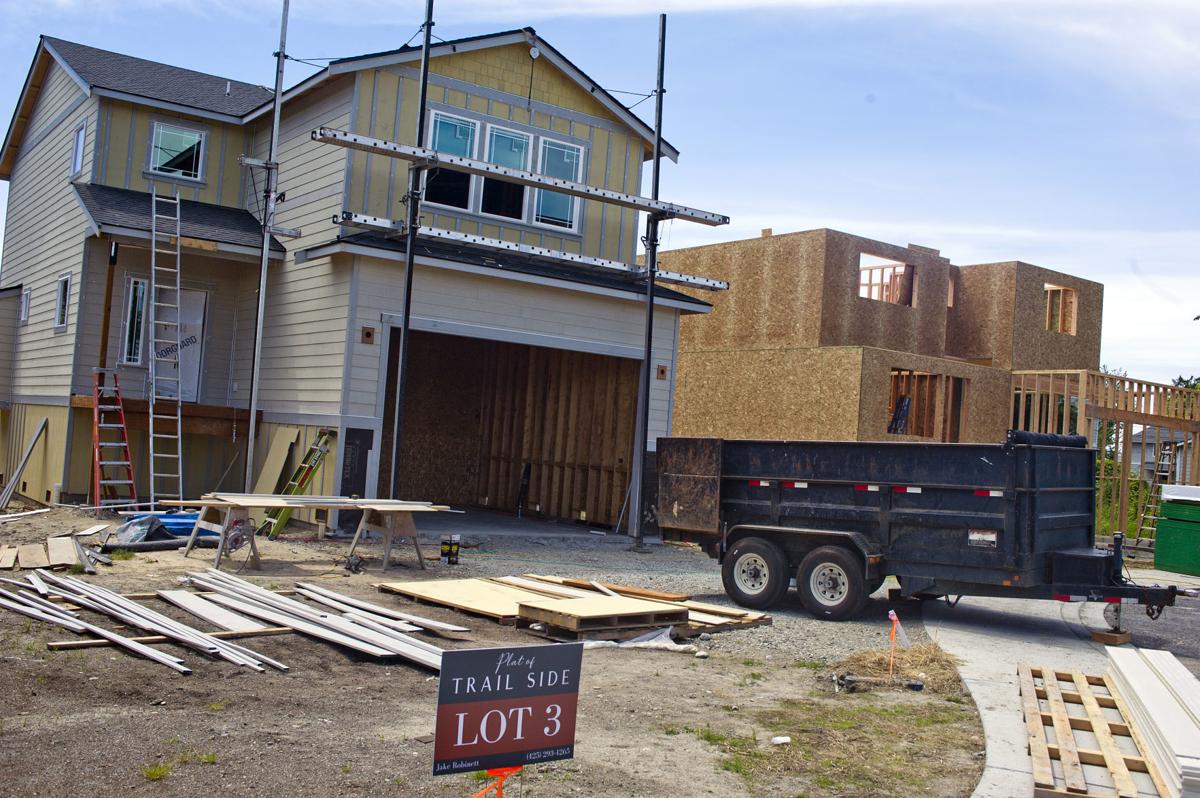 Crews work on new homes Friday, June 19, on a new Stanwood home in the Trail Side development near the Stanwood Library. There are 14 homes planned on the nearly 3 acres site at the end of 96th Avenue NW, between the library and Heritage Park. 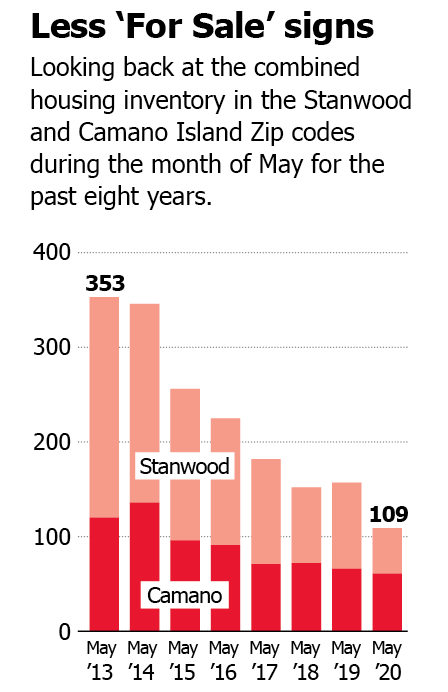 Looking back at the combined housing inventory in the Stanwood and Camano Island Zip codes during the month of May for the past eight years.

Landscaper Clarance Van Beek of Granite Falls works on the yard Friday, June 19, on a new Stanwood home in the Trailside development near the Stanwood Library. There are 14 homes planned on the nearly 3 acres site at the end of 96th Avenue NW, between the library and Heritage Park.

Crews work on new homes Friday, June 19, on a new Stanwood home in the Trail Side development near the Stanwood Library. There are 14 homes planned on the nearly 3 acres site at the end of 96th Avenue NW, between the library and Heritage Park.

Home sales have remained surprisingly steady since the start of the coronavirus pandemic, but new listings have not.

Fewer homes than ever are for sale in the Stanwood-Camano area, further pinching a market that already had historically low inventory, according to new data from the Northwest Multiple Listing Service.

“Inventory is shockingly low,” said Marla Heagle, an owner of Windermere Stanwood Camano. “When people face uncertainty, like this pandemic, they tend to freeze their plans to put their home on the market.”

“We’re hoping to see more new construction,” said Renae Kettler, owner of two local RE/MAX offices. “New construction is what will help with inventory, and we know that more is on the way in Stanwood.”

Meanwhile, the high demand and low supply have pushed prices higher than ever. In Stanwood and Camano, May’s median home price reached about $515,000, up from about $430,000 a year prior in both locations. There were 87 homes sold in the area last month, down from 108 a year ago but up 28 from April 2020.

The steady demand — particularly in the $300,000 to $600,000 range — is leading to an increasing number of sellers seeing multiple offers the day a home hits the market.

“Homes here have been selling quickly for several years, but seeing multiple offers and some bidding wars is something new,” Kettler said.

Heagle said it still depends on the house.

“Not every home in that price range is getting multiple offers, but it’s getting more common,” she said.

The abundance of caution surrounding the COVID-19 pandemic also has affected the real estate market. Gov. Jay Inslee’s stay-at-home order allowed real estate to continue in a limited fashion. In-person meetings with customers were prohibited except to sign a document or view a property. Property viewings were limited to two people at once, with social distancing, and on-site open houses were not permitted.

Realtors said some sellers opted to not put their homes on the market because they did not feel comfortable opening their houses up to people, even on a limited basis, due to health concerns.

Agents quickly embraced new rules when showing homes, such as requiring masks, social distancing and disinfecting between visits. The efforts, they said, have been increasingly making buyers and sellers more comfortable.

Under Inslee’s phased reopening plan, more real estate activities will be allowed during Phase 2 and even more under Phases 3 and 4.

Construction was affected by the pandemic, as well. Builders largely went silent during March and April before being allowed to restart existing construction projects with COVID-19 safety precautions. Additional construction was allowed during Phase 2, according to Inslee’s plan.

Across most of Washington, brokers added a total of 9,871 new listings to the MLS database during May, which compares to 14,689 for the same period a year ago. At month's end, the selection included 10,357 active listings; that volume was 5,766 fewer than the total of 16,133 a year ago.

“The constraint on available inventory makes it feel like we’re running out of homes to sell,” J. Lennox Scott, chairman and CEO of John L. Scott Real Estate, said in a news release. Buyers are “eagerly waiting for each home to come on the market with increased focus on homes in the more affordable and mid-price ranges.”

Kettler and Heagle said in addition to the area’s traditional house hunters — such as new young families and out-of-state retirees — they’re seeing more people from Seattle.

“We’re seeing a lot more 206 area codes call us,” Heagle said. “I think the fact that more people can now work from home, they’re choosing to get out of the city and come here.”

Many pandemic business trends are likely here to stay

Local small businesses and organizations rose to the challenge of creating safe ways to interact with the public and stay connected during the pandemic. Some of the changes adopted by shops, services and churches are likely to become permanent.