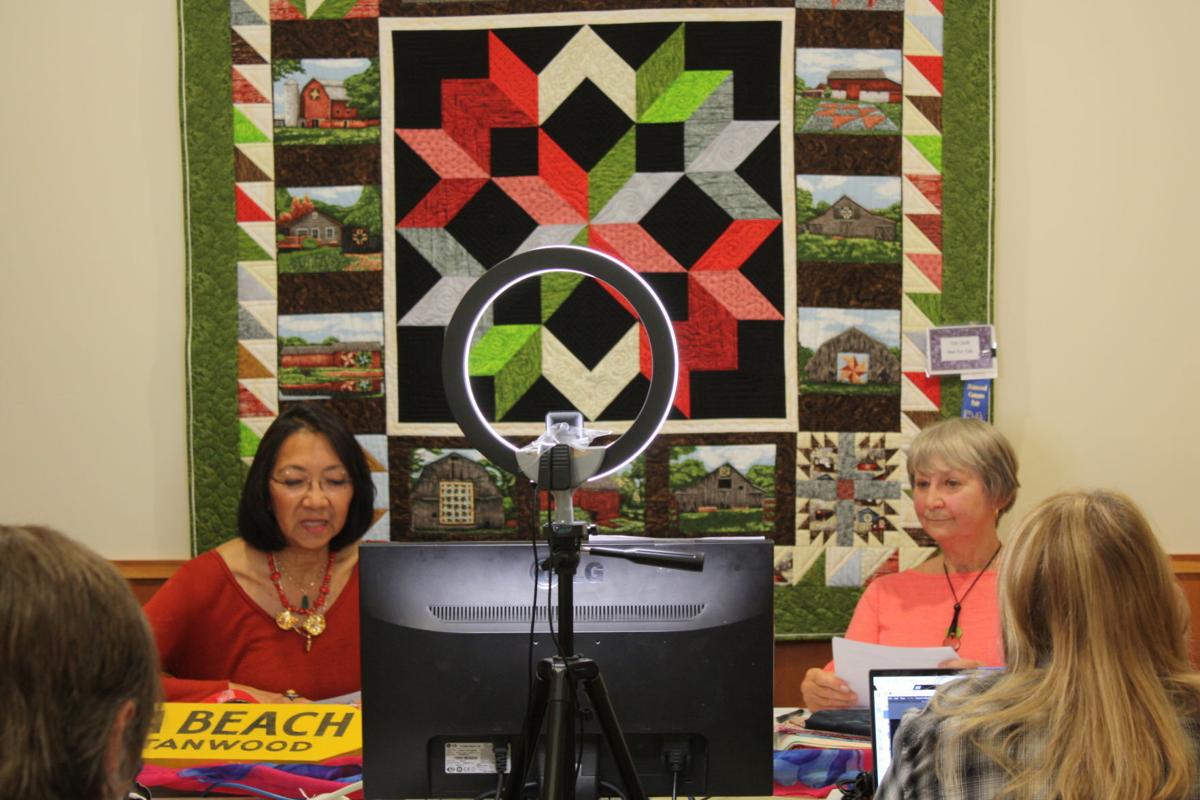 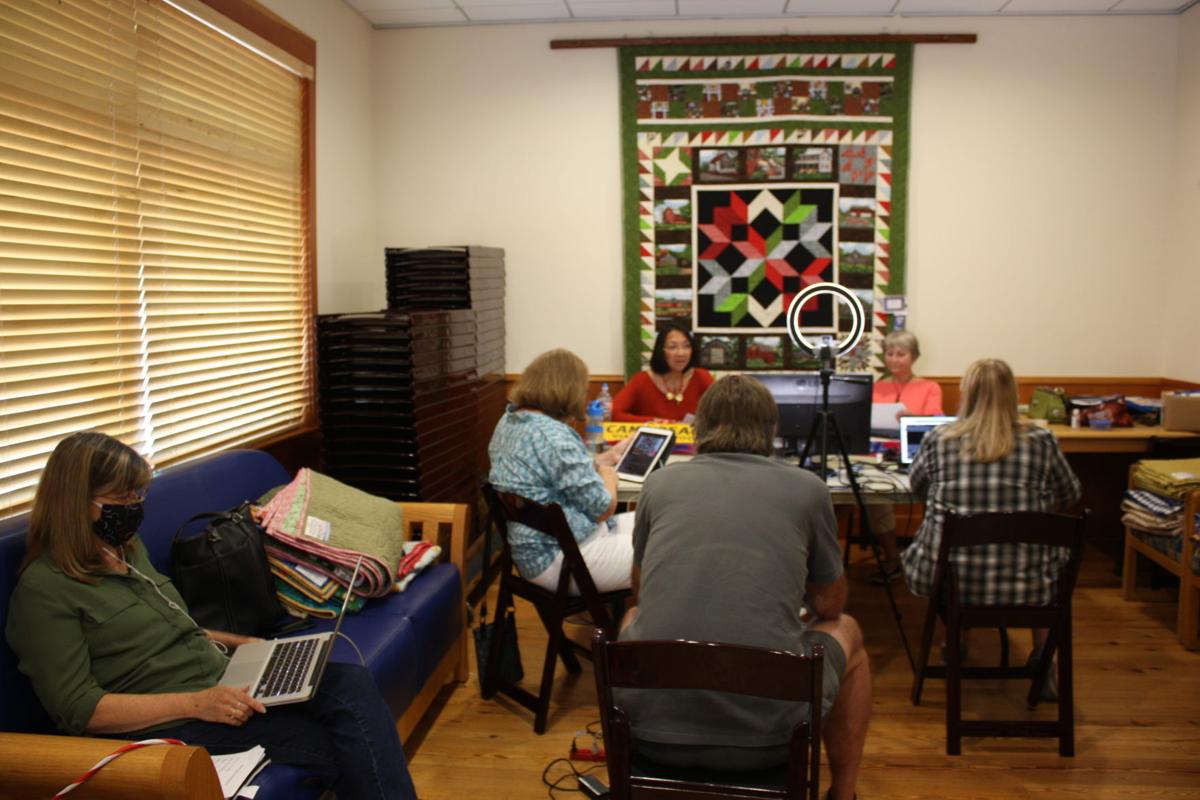 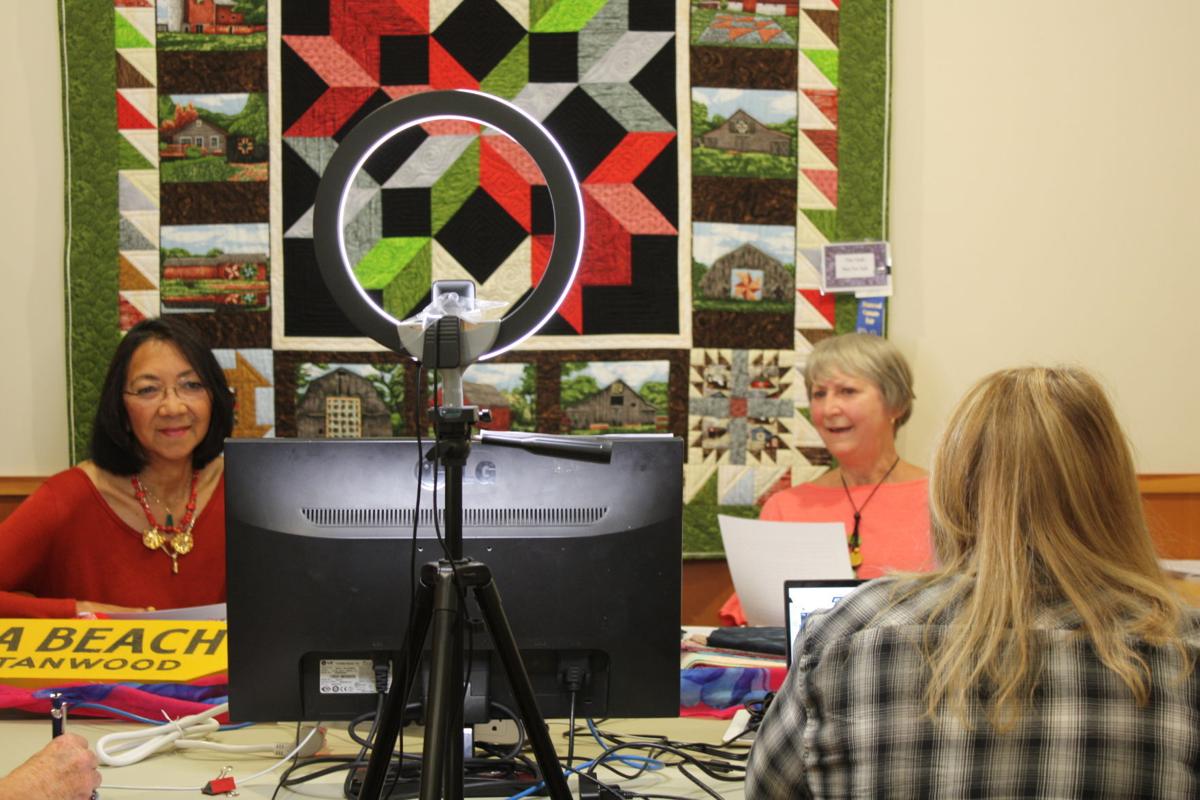 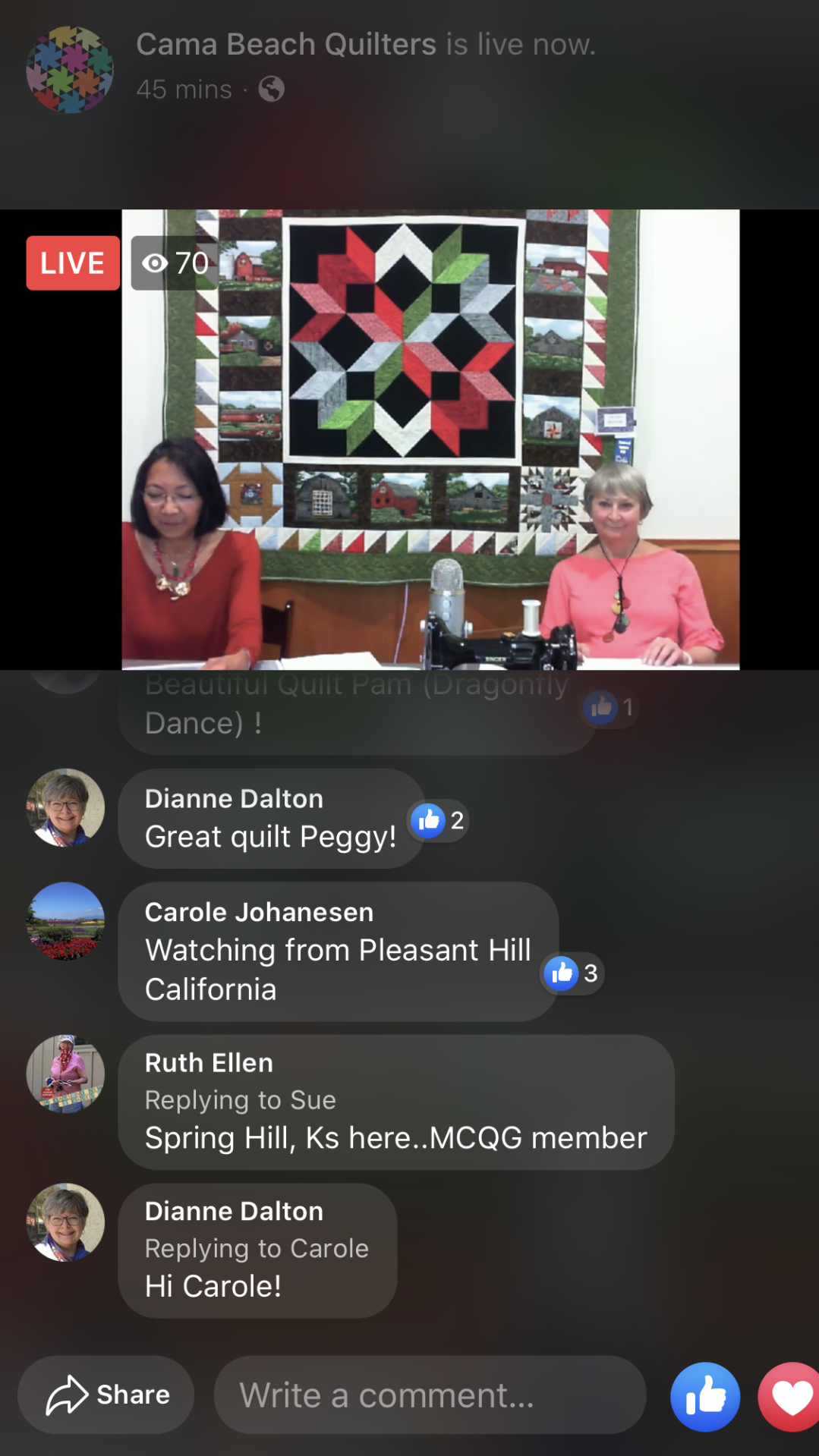 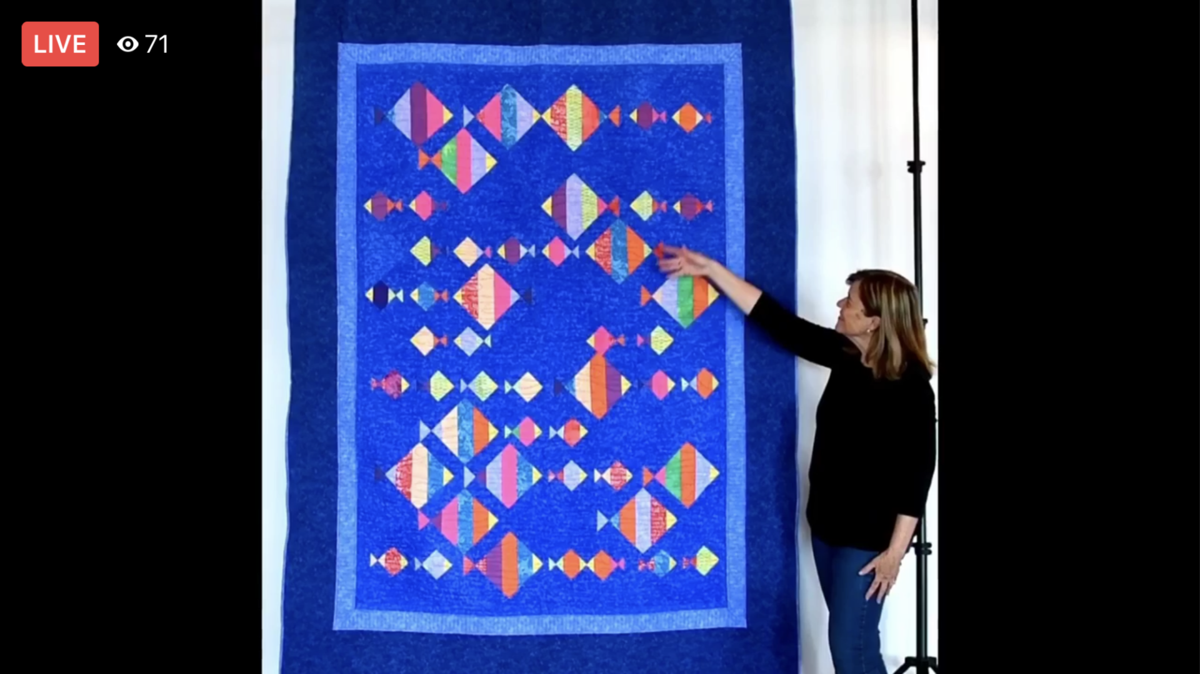 Screen shot from the virtual Quilts on the Beach show at Cama Beach State Park July 25.

Screen shot from the virtual Quilts on the Beach show at Cama Beach State Park July 25.

Normally, the Quilts on the Beach event packs Cama Beach State Park with people strolling along admiring the artistry of Cama Beach Quilters.

CBQ would hang their handiwork on cabins, beach houses and the boathouse to show and sell, raising money for quilt supplies and park programs. These quilters also make sure all the beds in the 1930s cabins are topped with quilts, which adds to the old-time, homey feel.

But in this pandemic summer, when many event organizers throughout the region have had to cancel, CBQ decided to take its 11th annual quilt show live online, Saturday, July 25. Their endeavor was more intricate than many events that take to the internet.

Although the roughly 40 active members of the Cama Beach Quilters practice an age-old art and some “may have been born yesterday,” they put the many pieces of the virtual show together like a precision quilt, headed up by Susan Palmer.

“I knew that all the other quilt shows were being canceled,” she said.

Palmer is exploring ways to support her work as a fabric representative and make presentations online, rather than drive miles to scattered stores.

“It was a personal challenge she was setting for herself," CBQ quilter and organizer Pam Frederickson said. "We just went for the ride."

CBQ isn't alone. Local bands, organizations and libraries have all tried versions of online events. Other local groups attempted new ways to adapt under the ever-changing pandemic restrictions to find that events such as car parades are OK but drive-in concerts are now discouraged by health officials.

The Centers for Disease Control and Prevention urge event planners to adhere to guidance on the cleaning of restrooms, the need for ventilation, and modifying event space layouts with physical barriers to ensure social distancing — all the while following additional state and local requirements.

The guidance has left online events as one of the few remaining options.

As a result, schools, churches and governments have been honing their online offerings, but smaller local events present a unique challenge to organizers.

Quilt shows require a lot of preparation, like cataloging quilts with their name, creator, size and price. For the virtual show, CBQ members also prepared photos of each quilt to go along with a live presentation and scripts to describe each quilt.

Palmer was in charge of technical aspects with Karen Fox Curry and Bob and Nancy Snead assisting. Many others helped along the way.

A Facebook page was created a week and a half before the event and got 32,000 hits in that time. It also got 1,300 views on the video. While live, the show had more than 100 viewers at one time with many more coming and going.

The event started with a video of Cama Beach State Park history that started with footage Palmer made with a GoPro camera while bicycling through the park and edited with interviews. Normally, Palmer operates a longarm quilting machine to stitch decorative patterns through layers of fabrics pieced by the others. For the virtual event, Palmer again was the one to stitch everyone’s work together.

Before the event, the group ran two trial rehearsals to be sure all the pieces fit and to work out bugs.

On the day of the event, everyone met in masks in the Forest Room at the park. Each did their part to set up sound, lighting and internet connections, and took their places.

The event started with the park history video. The team watched on phones and tablets with an eye on the chat room — a place where viewers on computers can type messages. Excitement mounted while viewers logged into the chat room, said hello to friends and announced where they were from.

“We’ve got 60 people on, and several want to buy quilts,” said Curry.

On cue, commentators Elaine Chan and Pam Frederickson started their friendly dialog, filmed in front of a large mossy green quilt — complete with blue ribbon. Frederickson opened with a welcome and a warning: “There may be some glitches.”

And there were. They got feedback from the chat room — they couldn’t hear anything. Frederickson paused while Palmer checked for problems.

“I thought I had everything figured out. We had volume the entire time, but people couldn’t hear it,” Palmer said.

The audio is on the video of the entire show, so the glitch was hard to pinpoint. After a few stops and starts and 10 tense minutes offline, the problem somehow resolved itself. The show continued, but many viewers had left. Curry messaged and coaxed some back.

From there, the show rolled along smoothly. Chan and Frederickson talked about each quilt and answered questions that arose. Some quilts had suitable names for 2020 like “Change of Plan,” “Signs of the Times” and “Out of the Box” — which all sold.

Five of the 25 quilts shown sold during the live event and four more sold the next day. Organizers considered it good result, and it isn't over yet.

The remaining quilts can be viewed and bought on the Cama Beach Quilters Facebook page. Sales fund supplies for future quilts and park programs. To watch the video, scroll down to July 25. In addition, Cama Beach State Park always has new quilts for sale.

“Even if we do live (quilt) shows, I think we should do a live broadcast of the show,” Palmer said. “There’s a future for a lot of businesses to have live events and have a broadcast at the same time, an opportunity to look professional.”

Let us help you find something fun to do! Check out a ton of upcoming events and happenings around Stanwood and Camano Island ...