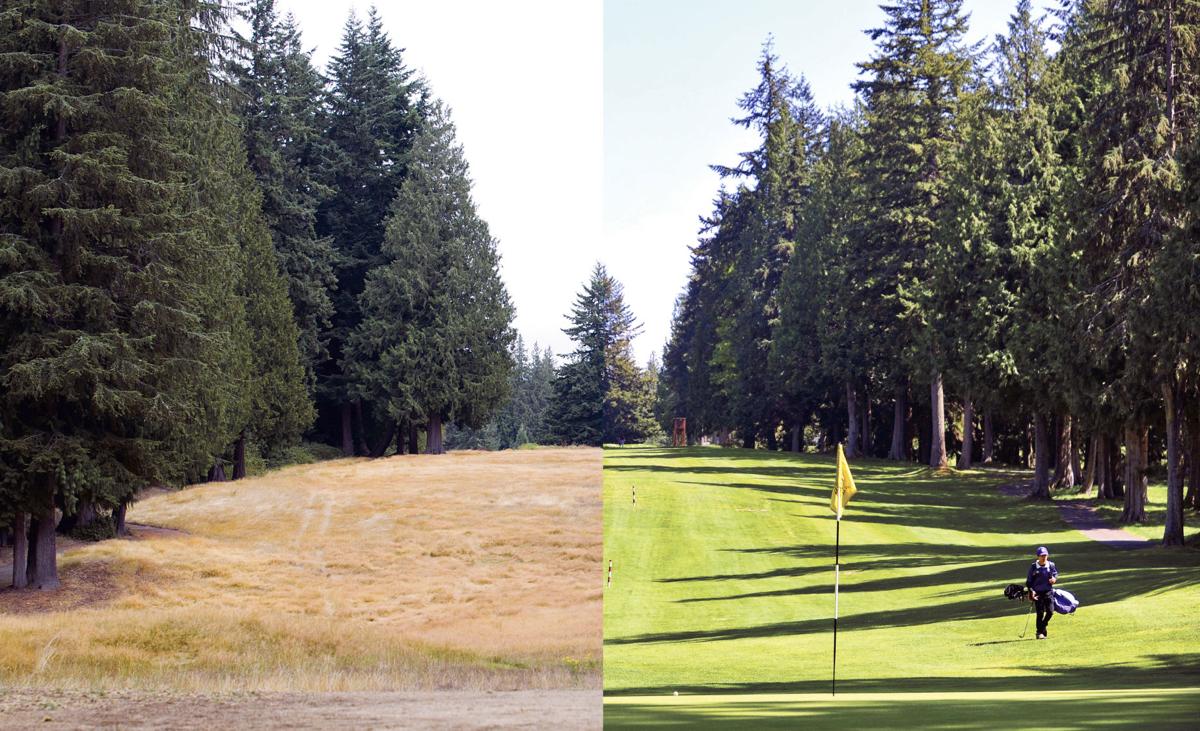 A side-by-side comparison of Hole 1 at Kayak Point Golf Course as it looks now, at left, and an image from April 2018. 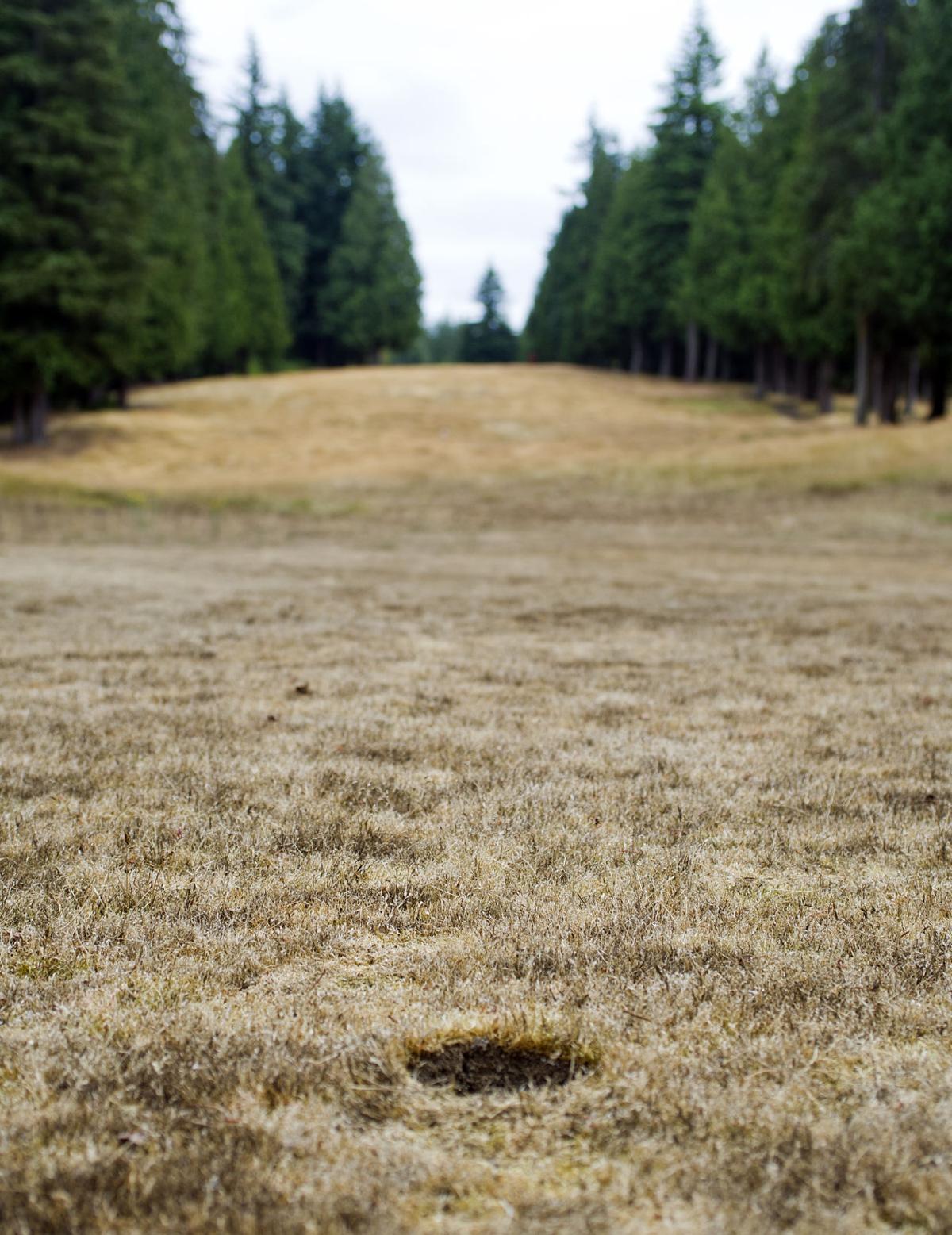 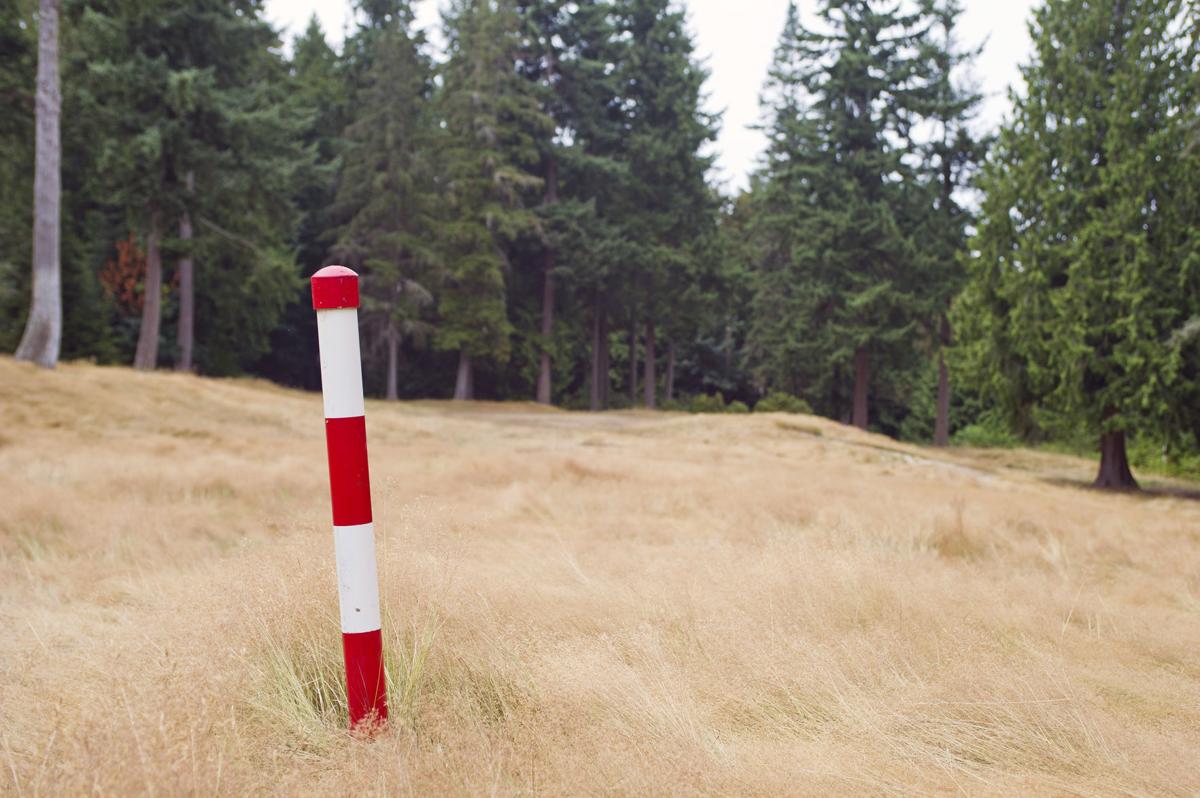 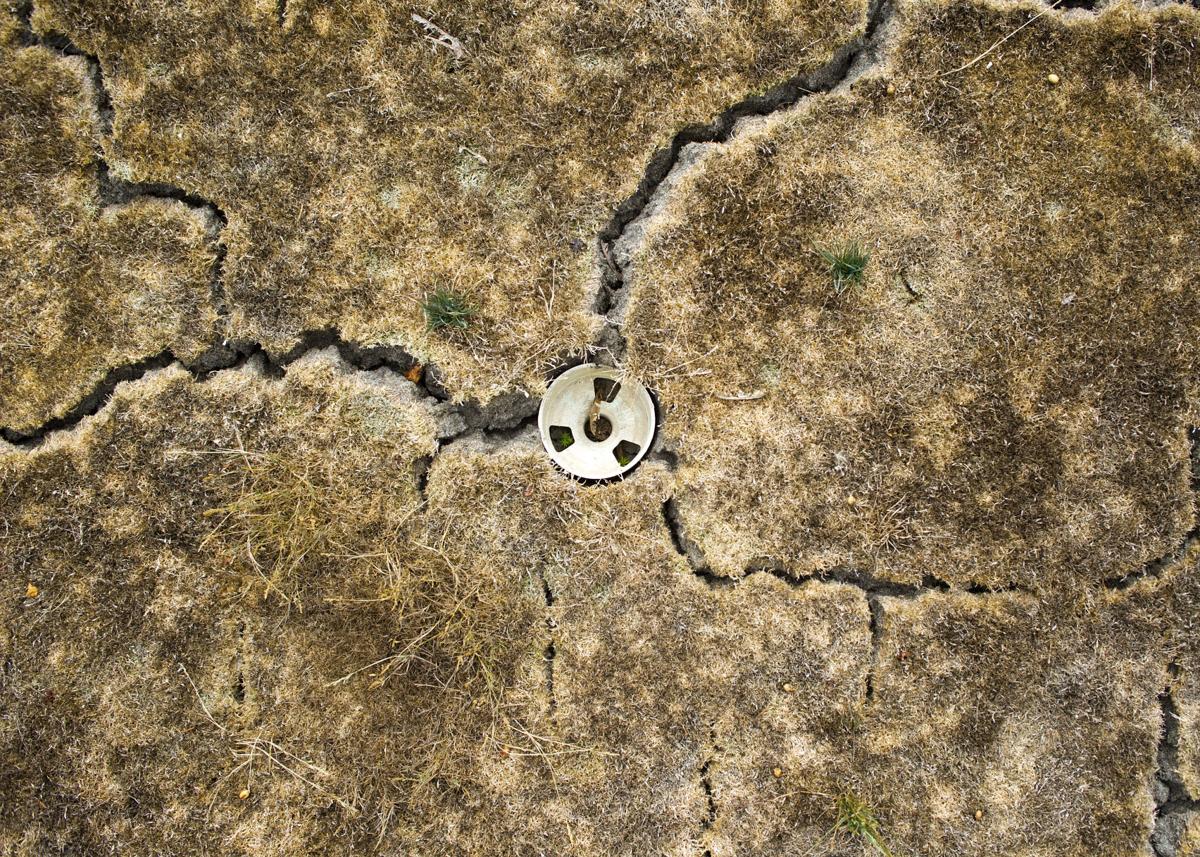 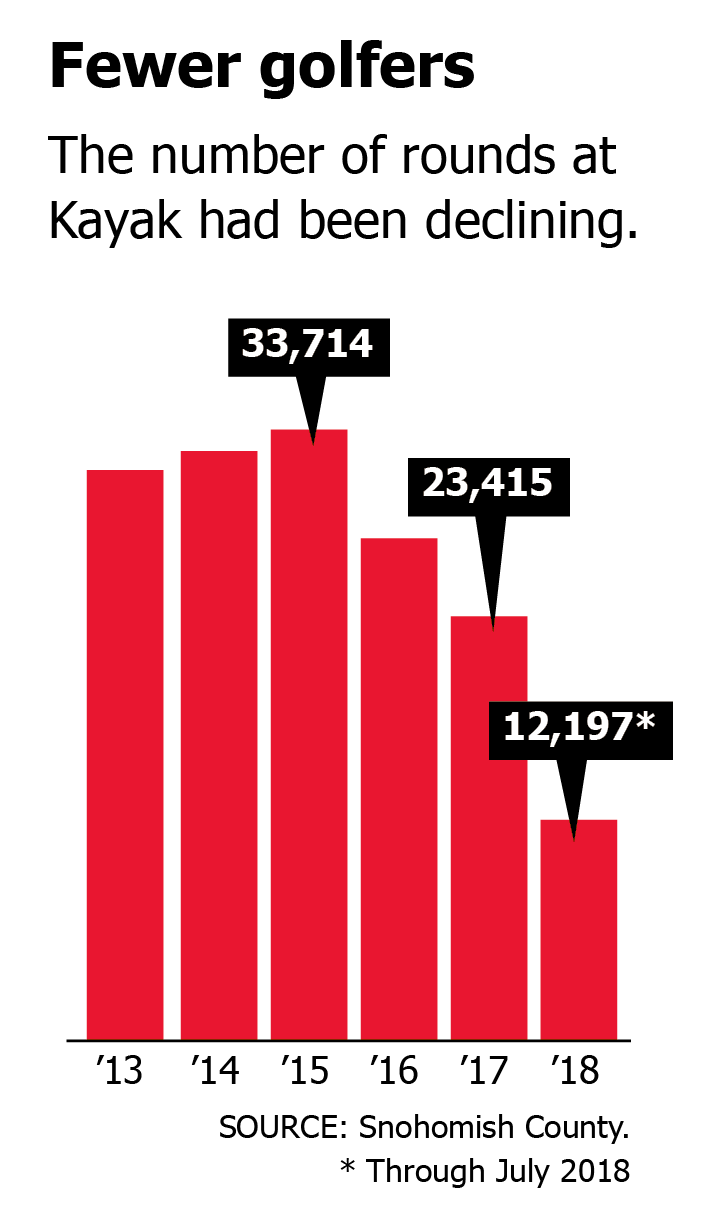 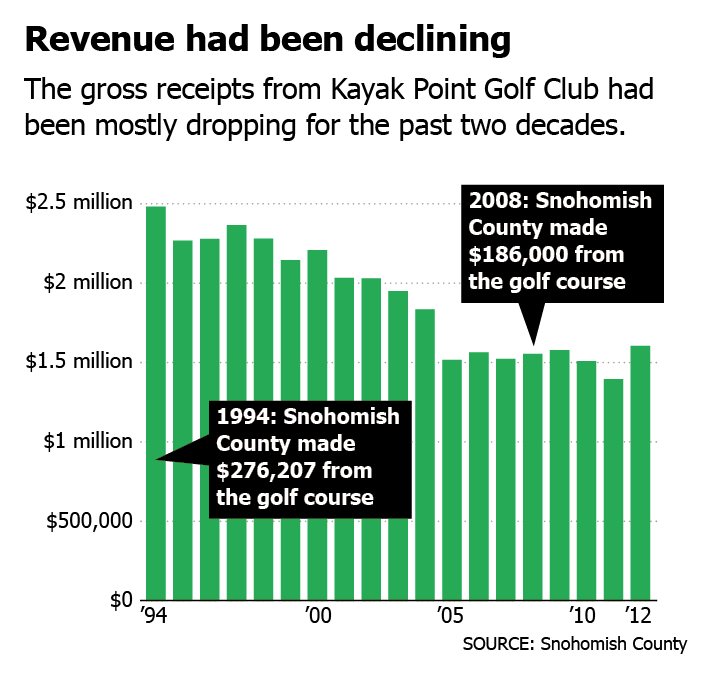 The former greens are cracked and brown.

And eagles and birdies are now found in the rough.

However, hope remains that Snohomish County will find an acceptable suitor for the former Kayak Point Golf Course, south of Stanwood.

The county recently extended its third round of bids, trying to bring a new business to the 270-acre county-owned site, which is overseen by the Parks, Recreation and Tourism department.

The new deadline for applications to use the property is Sept. 5, and the county is willing to think beyond golf.

“There is still the potential that it could be a golf course, but we’re also looking at other ideas,” said Shannon Hays, communications director with Snohomish County Parks, Recreation and Tourism.

According to the county’s public call for proposals for the site, other ideas might include horseback riding, outdoor laser tag, biking or hiking trails, events, zip lines, glamping and the like.

In a statement, the company said it terminated its lease agreement with the county “due to the reduction in rounds (of golf being played on the course), higher operating cost and no funding plan in place for future improvements.”

Access Golf had operated the course since it took over from Palmer/Kayak LLC in 2005. Initially, the company paid the county a percentage of the green and cart fees and other revenues it collected.

The contract was renegotiated in 2013, and the company started paying the county a flat monthly rental fee instead of a percentage of its revenues. The monthly rent was just over $14,000, for an annual total of $170,000 paid to the county.

In addition, both Access Golf and the county agreed to put $10,000 toward structural and capital improvements, and $500,000 in bonds to improve the clubhouse and course.

In 2014, the county agreed to contribute an additional $300,000 for capital improvements at the course, as well as reimbursing Access Golf for certain improvements to the grounds.

The contract was amended again in December 2017, changing the rent to a flat annual fee of $90,000 and allowing Access Golf to schedule non-golf-related events on the property in an effort to bring in additional revenue.

Revenue before business operating expenses fell, too, over the years, from $2.4 million in 1994 to $1.5 million in 2005. The course then maintained about $1.5 million revenue until shuttering operations, telling the county that the revenue wasn’t enough to cover expenses such as salaries, upkeep, improvements, marketing and utilities.

The property has been used for golf since 1977, and the county’s first two requests for proposals (RFPs) focused primarily on bringing in another vendor to run a golf course.

“We really wanted to make golf work,” Hays said. “We recognize that (golf) is valuable to the community here.”

More than 800 golf courses have shuttered across the US in the past decade, and data from the Sports & Fitness Industry Association has shown that millennials between the age of 18 to 30 have a lack of interest in playing the game. From Las Vegas, Nevada, to Mahwah, New Jersey, many courses are being replaced with housing developments.

Before releasing the third RFP, the county did more research and brought in outside organizations to study the property and trends in golf, Hays said.

Kemper Sports evaluated the site in April and delivered findings to the county, which can be found at snohomishcountywa.gov.

Kemper Sports noted that at the time of its visit, the course had been closed for several months, and had suffered from “decades” of minimum maintenance and upgrades.

According to the report, the course needs “an extensive list of capital improvements,” including irrigation system upgrades; repairing or replacing the maintenance building; fuel containment, chemical storage and equipment washing stations that meet current standards; reconstructing most fairways, which have “potholes” from the decomposition of buried tree stumps; reconstructing many tees; removing trees to improve sunlight and airflow to turf grass; and drainage.

Kemper Sports estimated that the improvements would cost between $3 million and $5 million. It also noted that “Kayak Point Golf Course is not desirable to a lease operator,” so the county would likely need a new business model, either operating the course itself or entering into a fee-for-service agreement (the county would pay a company to operate the course).

In either case, the report noted, the county would have to purchase furniture and fixtures for food, beverage and golf shop operations, a fleet of golf carts, and maintenance equipment.

Kemper Sports estimated this would cost an additional $1.5 million to $2 million.

The report noted: “In addition to the golf industry supply/demand imbalance, there is general economic uncertainty and an escalating minimum wage that is going to have a crippling effect on the already low-margin sources of revenue Kayak Point Golf Course can generate.”

Kemper Sports concluded: “There is no reason to believe that there would be any realistic return on investments made in the existing golf product.”

Several property owners near the former golf course have been frustrated with the closure.

Prentice Smith wrote in an email to the Stanwood Camano News that he would like the land to continue being a golf course. In the meantime, he is worried about the neighborhood’s property values declining.

“I and others have filed appeals and are seeking reductions because of the loss of a great asset with no plan for the future,” wrote Smith, who saw his property taxes increase by $1,000 for 2020. “Some are talking about a class action suit against the county.”

Smith and about 20 neighbors attended a public hearing July 1 with Snohomish County officials.

“Ten of us individually spoke about our perspectives, and gave a unified voice to keeping the golf course a golf course,” he wrote.

However, neighbors are considering moving, he said.

Meanwhile, the county awaits the Sept. 5 deadline for this third round of requests for proposals in hopes of finding a future use for the slowly deteriorating site.

The company that runs Kayak Point Golf will end operations Oct. 21, halting golf at the popu…

During the business portion of their Thursday meeting, Stanwood City Council members accepted a grant to renovate a ballfield at Heritage Park…

Stuart Wilson and his growing stable of employees have plenty of work to do these days manufacturing tactical gear for police, military and government agencies at Stanwood-based Esstac.

Dear Editor: Snohomish County released the third Request for Proposals for Kayak Point Golf Course on July 3, with a three-week deadline for s…