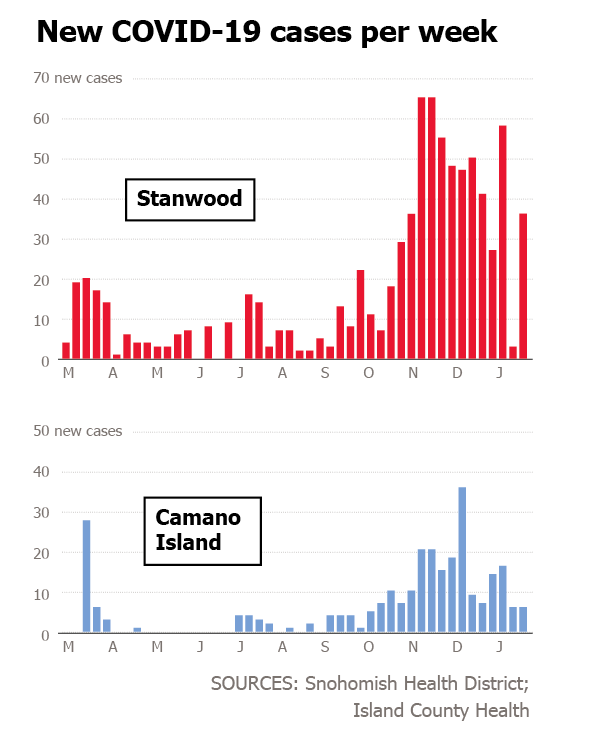 The rolling two-week case rate in Snohomish County fell to 253 cases per 100,000 residents down from 376 infections per 100,000 people, according to data released Monday from the Snohomish Health District.

“This is all good news,” Snohomish Health District health officer Dr. Chris Spitters said at a media briefing Tuesday morning. “But we can’t celebrate too soon or let our guard down or this will come right back as it has before.”

In the 12 months since, “thousands in this county have sacrificed time with friends and families, lost jobs or businesses, or have lost loved ones to COVID,” Snohomish Health District health officer Dr. Chris Spitters said at a media briefing last week. “I recognize that the decisions made have both short-term and lasting impacts as we move through this, and we have a long road of recovery ahead. Our collective response has saved lives, spared hospital capacity, and prevented further suffering.”

"Let's try to ... bend this curve and get things back down again," he said. "Vaccine alone is not going to open up society in the short run. We need your help to reduce transmission using the old fashioned methods that we've been promoting for months and months, but they work."

Over the weekend, Snohomish County recorded 345 new COVID-19 cases. As of Monday, there were 58 COVID-19 patients in Snohomish County hospitals — down nearly 50% from a few weeks ago, according to county data.

Stanwood has recorded 40 new cases during the past two weeks, down from the 85 detected in the previous two weeks. The case rate in the Stanwood ZIP code is between 300-399, according to the Health District data from Dec. 27-Jan. 9. That’s down from more than 500 infections per 100,000 people in late November.

On Camano Island, there were 12 new cases of COVID during the past two weeks, down from 30 during the previous two week period, according to Island County Public Health data as of Jan. 21.

In Island County, the COVID infection rate rose again last week to 173 cases per 100,000 people. The rate has steadily increased each week since dipping to 89 infections per 100,000 in late December.

To date, there have been 792 confirmed COVID-19 cases of Stanwood residents and 256 cases of Camano Island residents, according to data from each county.

We are headed in the right direction Snohomish County, but still have a long way to go. COVID case rates have been declining in recent weeks and are currently at 253 per 100,000 population for the two-week period ending Jan. 23.#InItTogether pic.twitter.com/edEkdYZyqn

A spike in cases in Whatcom County played a role in keeping the four-county North Region from meeting two of the metrics needed to advance to Phase 2 in Gov. Jay Inslee’s Healthy Washington — Roadmap to Recovery plan.

The Puget Sound Region, which includes Snohomish, King and Pierce counties, is also failing the same two criteria. The region had a 23% increase in the rate of new COVID hospital admission rates per 100,000 in the most recent 14-day period, and it saw a 9% decrease in test positivity rate

To meet the new cases and new hospitalizations metrics, regions need to have decreases of at least 10%.

During Phase 1, indoor dining is prohibited and indoor gatherings banned. Gyms are limited to appointment-only and to one customer per 500 square feet, and bowling alleys and other entertainment facilities are restricted to private parties of individual households of no more than six people.

Two cases of a new COVID-19 variant have been found in two Snohomish County residents, the state Department of Health, the Snohomish Health District and the University of Washington Medicine Virology Lab confirmed Saturday.

“The Snohomish Health District had already instituted standard case investigation, isolation, and contact tracing prior to learning about these cases,” Spitters said. “Containment protocols are no different for B.1.1.7 variants than they are for all other cases of COVID-19. Follow-up investigation is underway to learn more about these cases and the individuals who tested positive for this strain.”

The new B.1.1.7 variant spreads more easily and quickly than other variants but there is no conclusive evidence that it causes more severe illness or increased risk of death, according to the Centers for Disease Control and Prevention. As of Friday, there were 195 detections of this version in 22 states.

The U.K. variant appeared in September 2020 and has spread throughout London and southeast England. It is expected to be the dominant strain in the U.S. later this year.

“While finding the B.1.1.7 variant is concerning, we knew it was only a matter of time before we found evidence of it here in Washington,” state Secretary of Health Umair A. Shah said. “Now that this variant has been found, it underscores the absolute importance of doubling down on all the prevention measures to protect Washingtonians against COVID-19.”

Students who are attending in-person — K-3 hybrid, small groups and special education programs — will be joined by fourth- and fifth-grade students on Feb. 1 in a hybrid model.

The Snohomish Health District has recommended schools bring high-needs children and K-5 students into buildings under a hybrid model, citing schools that follow safety protocols for younger children have not been a source of major outbreaks.

According to the most recent state health metrics for schools, middle school students can return in a hybrid schedule when COVID-19 case rates are less than 350 infections per 100,000 residents and trending downward for two weeks, in addition to meeting other health metrics such as case positivity and hospitalization rates.

High school students could start returning in a hybrid setting when case rates drop below 200 infections per 100,000 people.

Local seniors get vaccine: 'There is light at the end of the tunnel'

Jennifer Flax sprung out of the chair wearing a giant smile. “I feel so relieved,” she exclaimed moments after receiving the first dose of the Moderna COVID-19 vaccine Friday at Stanwood Community & Senior Center.