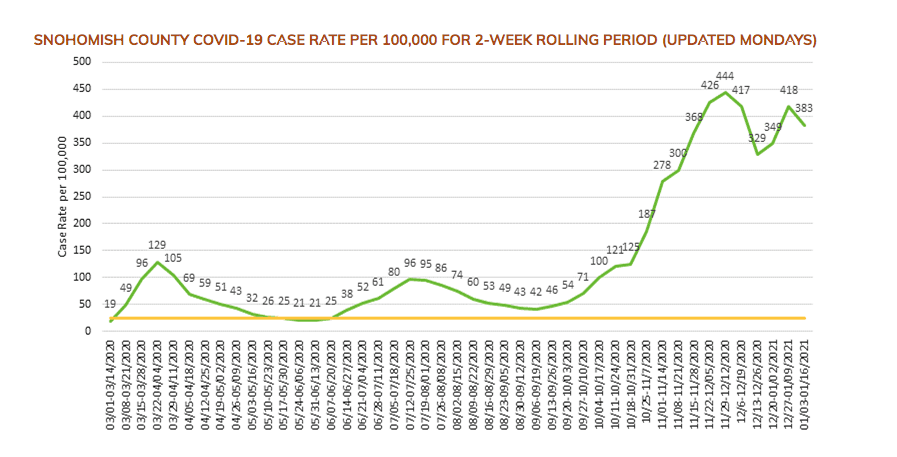 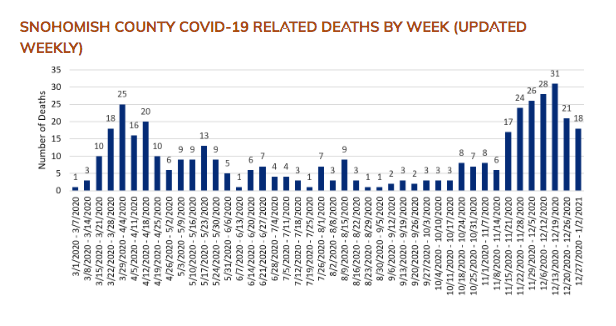 The rolling two-week case rate in Snohomish County fell last week to 383 cases per 100,000 residents down from 418 infections per 100,000 people, according to data released Tuesday from the Snohomish Health District.

The decrease comes after two weeks of increasing rates that followed two weeks of decreases from the county's record high of 444 infections per 100,000 people in early December.

"Based on our preliminary data, and given the increased cases and test positivity rates after the holidays, we anticipate numbers going back up for the next reports being run by the Department of Health on Friday," according to a Snohomish Health District news release Tuesday.

"Let's try to ... bend this curve and get things back down again," Spitters said. "Vaccine alone is not going to open up society in the short run. We need your help to reduce transmission using the old fashioned methods that we've been promoting for months and months, but they work."

Over this long holiday weekend, Snohomish County recorded 602 new COVID-19 cases. As of Tuesday, there were 82 COVID-19 patients in Snohomish County hospitals — nine of those were on ventilators, according to county data.

From Jan. 12-19, Stanwood has recorded 14 new cases, down from the 52 detected in the previous seven days.

On Camano Island, there were 33 new cases of COVID during the past two weeks, up from 10 during the previous two week period, according to Island County Public Health data as of Jan. 15.

In Island County, the COVID infection rate rose again last week to 136.8 cases per 100,000 people. The rate has steadily increased each week since dipping to 89 infections per 100,000 in late December.

To date, there have been 767 confirmed COVID-19 cases of Stanwood residents and 250 cases of Camano Island residents, according to data from each county.

“We are continuing to see flat trends at a high level of disease activity, with signs of a concerning uptick in the most recent data,” said Dr. Scott Lindquist, the state epidemiologist for communicable diseases. “If we want to maintain the progress we made in the fall and move forward with reopening, we must redouble our efforts to control the virus by avoiding gatherings with people who don’t live with us, wearing masks, watching our distance and washing our hands.”

The Puget Sound Region continues to meet three of the four criteria laid out in the Healthy Washington: Roadmap to Recovery announced recently by Gov. Jay Inslee.

The criteria lacking is a 10% or greater decrease in the rate of new COVID hospital admission rates per 100,000 in the most recent 14-day period. The Puget Sound Region had a 3% decrease and the North Region had a 61% increase.

So far this month, the county opened three drive-thru vaccination sites, and officials said they expect to open more in the coming weeks. The drive-thru sites are by reservation only and currently are serving people in the first eligible group to receive doses.

“I am frustrated and find it frustrating that we're having to fight for extra doses each week,” he said. “Last week we were given an allocation and only 2,300 doses by the state. We complained about it. We were able to receive an extra thousand doses from another county another facility that helped a little bit but 3,300 is far below the 30,000 capacity that we have stood up.”

As of Jan. 8, about 1,170 total doses have been administered in Island County, according to Island County Public Health. Currently, the vaccination providers for Island County are WhidbeyHealth and Island Drug.

As of Jan. 16, about 41,000 vaccine doses have been given in Snohomish County, according to the Snohomish Health District.