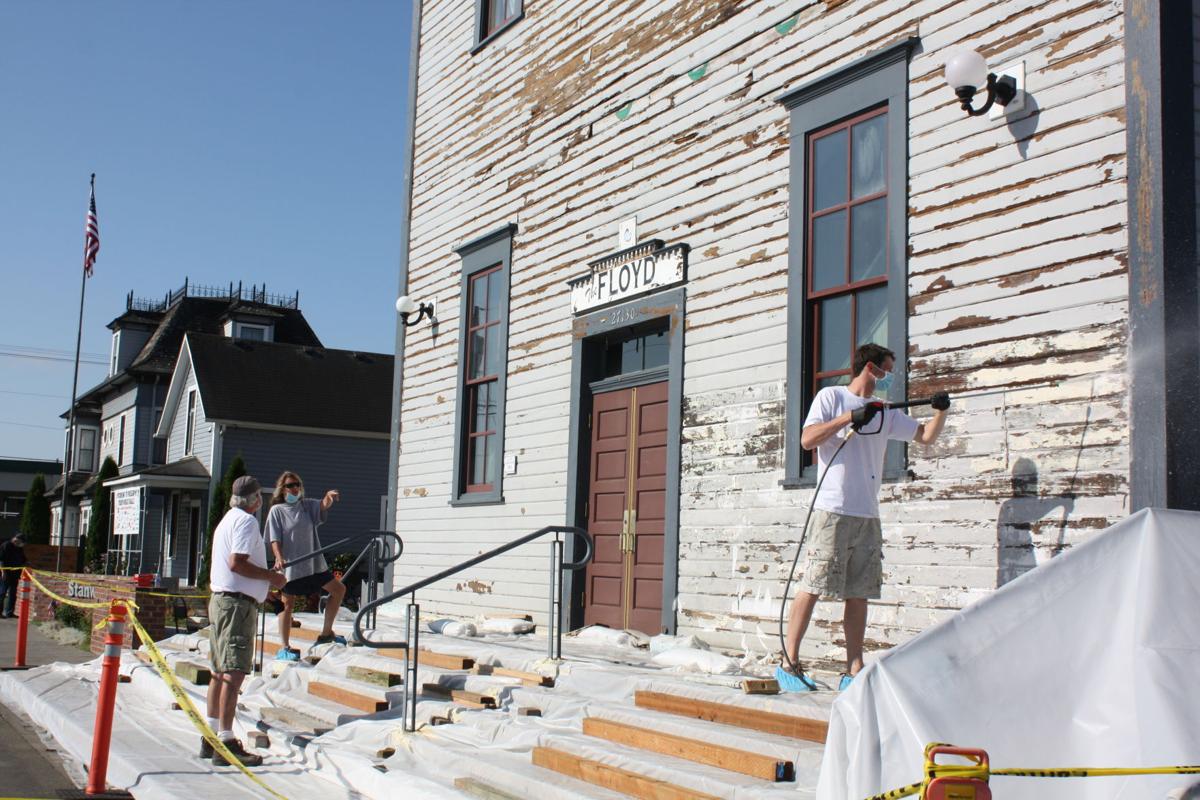 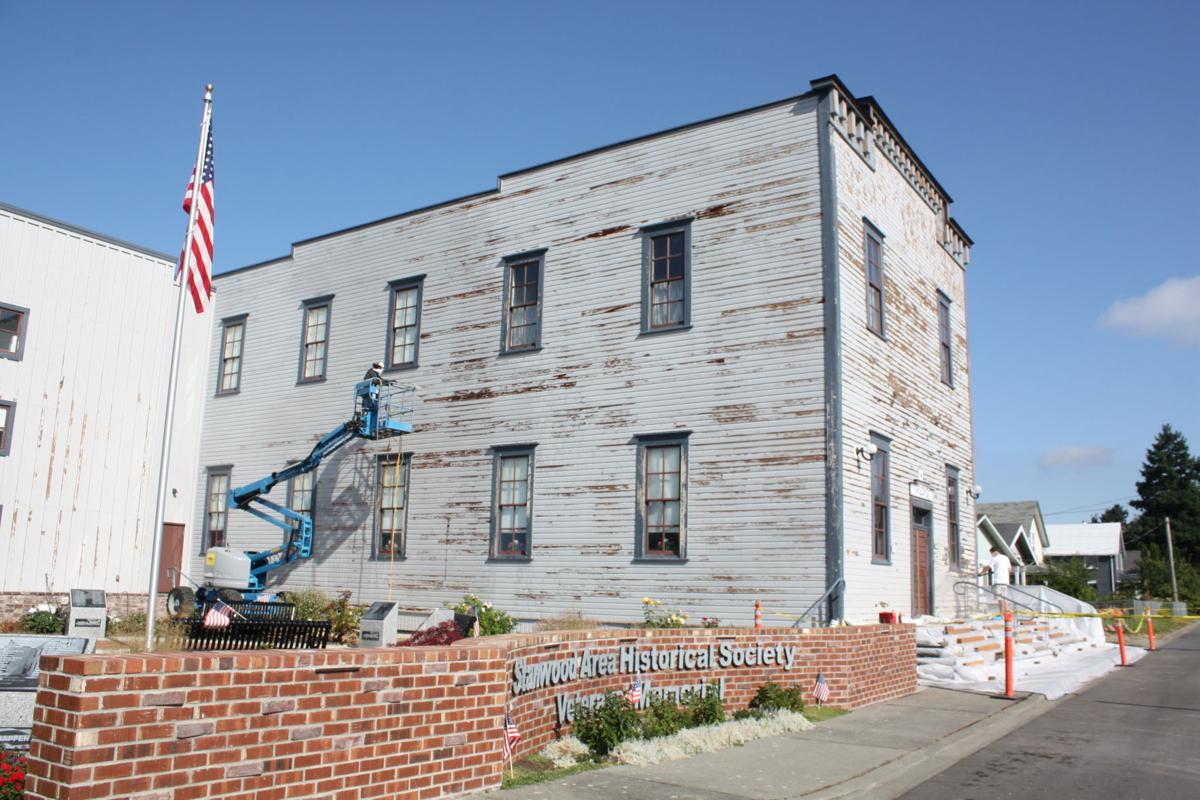 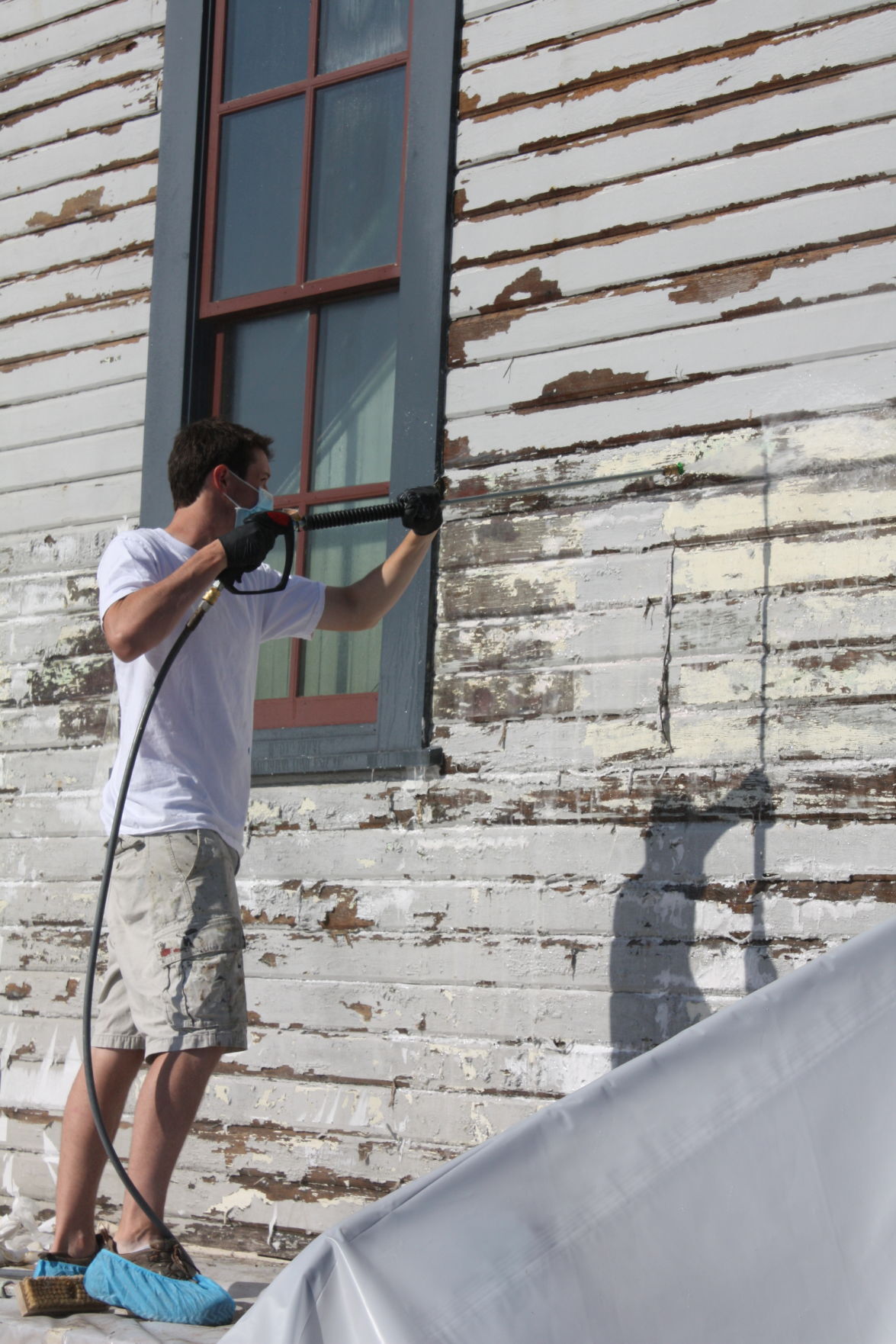 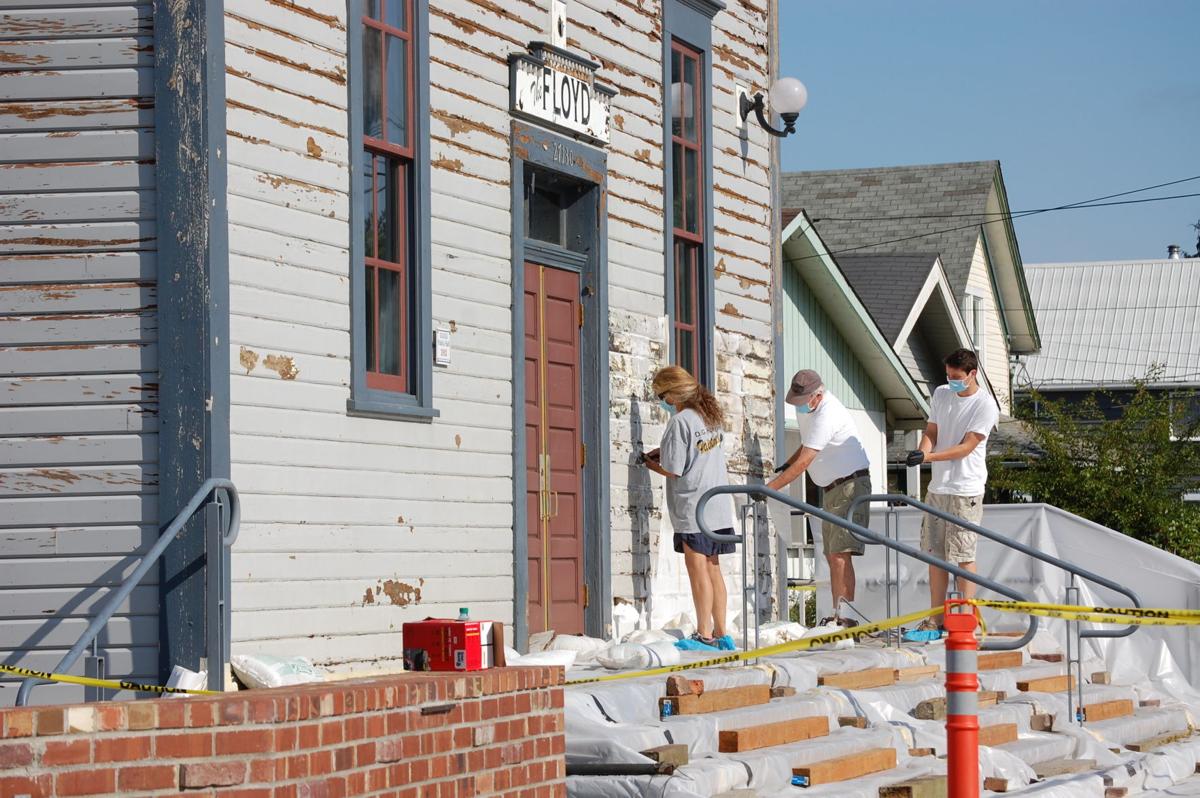 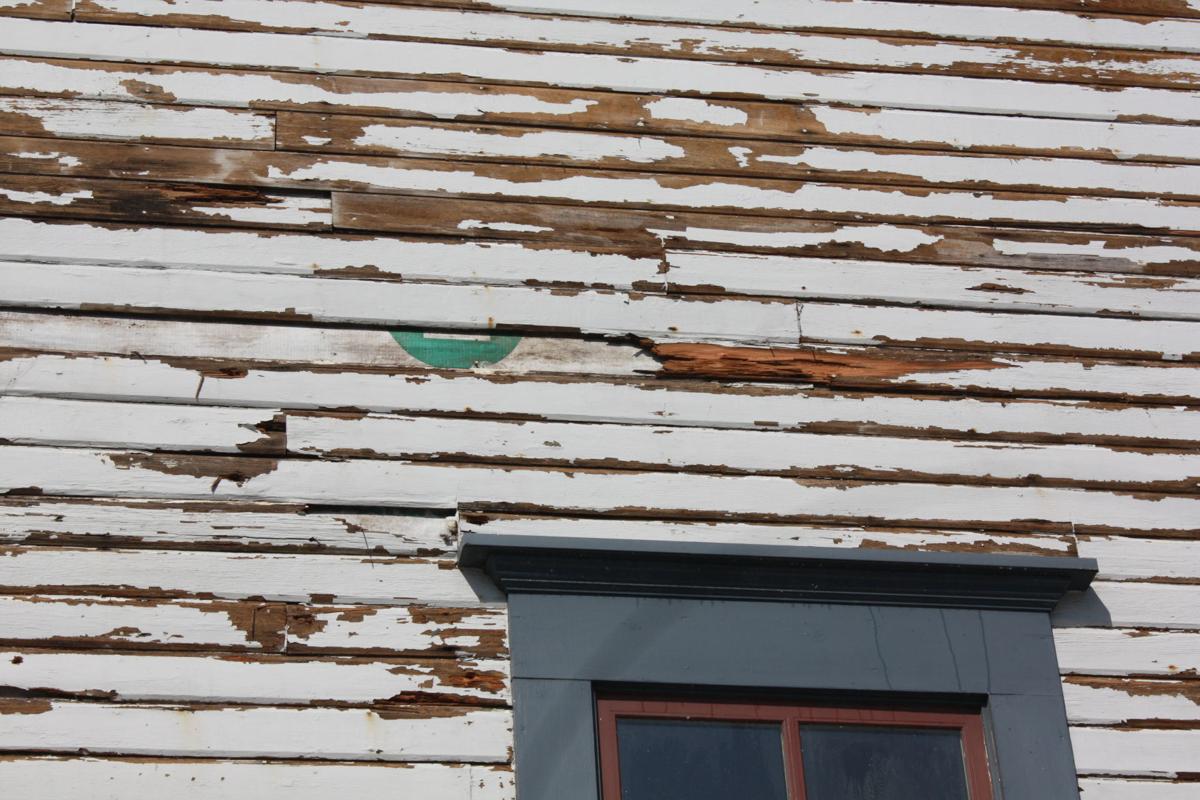 The sign says, “Closed Until COVID is History,” but the 118-year-old Floyd Norgaard Cultural Center as is busy as ever.

The Stanwood Area Historical Society is restoring the vintage building so it doesn’t disappear into the history books.

A historian by training and passion, society President Richard Hanks has wanted to restore the building for the past four years since he joined the community. He wrote a detailed history of the Floyd titled “If Walls Could Talk.”

“It’s not just a building, it was the community hall — this is where it all happened,” he said. “I’m from a little river town in Illinois. I was drawn here because of the character of the place.”

Since its beginning in 1902, the Floyd has hosted concerts, plays, sports and meetings. Today, it’s home to an ever-growing roster of popular events, like the Snow Goose Festival, Spring Tea, several Christmas events and the 46-year-old Fourth of July Parade and Ice Cream Social. Upstairs are exhibits that tell the story of Stanwood’s past, with local relics and clothing that hit home.

The historical society raises funds through events to operate and maintain most of the buildings on the block, including the D.O. Pearson House, the Eldridge Center and the Tolin Office. They all need maintenance, but the Floyd has the most urgent need.

Last winter, a cleaner felt a drip. She went into the balcony above the entry and found water running down the wall all the way to the front door.

“When that happens, you know that you’ve got to move. If I hold off much longer, expenses will go up exponentially,” Hanks said.

The Stanwood Camano Area Foundation stepped in with $6,000 to help with bills and utilities. The city of Stanwood gave $5,000 in CARES Act funds. The Stillaguamish Tribe gave $10,000, and an anonymous donor gave $10,000.

With partial funds in hand, Hanks and the board decided they had to do the work now or risk losing the building. The group is taking a chance on the community pitching in to bridge the financial gap.

“We can’t go through another winter. I can’t just sit back and watch it fall apart,” Hanks said. “I’m just a caretaker, but it would break my heart. That won’t happen on my watch.”

The Floyd’s south wall was insulated and painted in 2014, yet it already has rot. It has to be redone right.

D.G. Hopkins Painting and A.R.A. Construction squeezed the Floyd into their schedules. Work began in mid-August. A.R.A. worked on the roof and is now working on the front facade.

The Hopkins family knows how to properly paint old buildings. They’ve painted the Camano City Schoolhouse and Utsalady Ladies Aid building. Don and Nancy raised their sons, Ben and Forrest, in the business. Although they’re booked out, the sons love historic buildings. A couple jobs were postponed, so they took on the Floyd to make sure the job was done right.

Forrest Hopkins said he wanted to tackle the job to save this iconic building for “selfish reasons.”

“We want our name to be on it — the company that restored this building back to its original state,” he said.

The Floyd was built in 1902 by the Fraternal Foresters to be a gem for the Stanwood community. The organization went bankrupt in 1906 and the Independent Order of Odd Fellows bought the building, which it held until 1939.

It was called the Opera House and hosted everything from high school plays to concerts. Prize fighting, wrestling and basketball games. The Rotary Club started there.

Names of people long gone are written on the ticket booth wall. Performers and participants from vaudeville shows, minstrel shows, sopranos from Norway, Chautauqua lectures and a presentation by the famed Norwegian explorer Roald Amundsen, whose maps and canvas renderings detailed the perils of navigating treacherous Arctic seas.

In 1933, Eddie Lawson scrawled his name on the wall during a dance because Al’s Dance Band was back and so was he. Lawson, son of the bridge tender, scribbled on the wall more than once.

“You can feel the excitement; he’s having such a good time,” Hanks said.

In 1939 due to dwindling membership, Odd Fellows sold the building to Ed and Marie Bryant, who used it as storage for their hardware store.

The building was in bad shape when it came up for sale in 2000. The Stanwood Area Historical Society bought it for $200,000 from the Bryants, thanks to a donation from the Norgaard family. More than $1 million was raised by grants and community donations for restoration projects and to buy surrounding properties.

Karen Prasse remembers how the community came together for a huge fundraising effort to cover repairs in many projects through the years. She's a local historian who has been volunteering for SAHS for 30 years.

SAHS worked closely with the Department of Archeology and Historic Preservation, which wanted them to spend a lot more money. SAHS achieved some of the recommendations, like building an addition in the back with a kitchen, wheelchair access and an elevator, which costs a lot each year to maintain. Insurance on this big, public building is an incredible amount of money, Prasse said.

"Old buildings always need this tender loving care," she said. "The nature of historic preservation is to save the things that can be saved, that are important to the community — and to keep working on it. As a nonprofit, we never had enough money to do it all. Not everything is done at once. We've had several projects over the years and they all took a lot of money."

The Floyd was placed on the National Register of Historic Places in 2002.

"The community made a decision to preserve this building as a gathering place," Prasse said. "It's been successful in terms of what we planned, everything from weddings to string bands to classical concerts. It's fulfilling our goal for the community."

Now that work on the Floyd has started, workers found a lot more rot beneath many layers of paint. The estimate for the two contractors to repair the roof and paint the building was $50,000, but with extra wood and work it will cost at least $10,000 more.

“We’re uncovering a lot of problems we didn’t know we had,” Hanks said. “I knew it was going to be a monster job, but it’s a bigger monster than we thought.”

"Thank goodness Richard and the board are willing to tackle it. Robin (Hanks, treasurer) is working looking for grants," Prasse said.

"We can't let it slide. We've worked hard on it for many years now. This is a symbol of the community," she said. "If it's important to the community to have a place for meetings and events, I hope they will come forward and help us keep it up."

Historical Society members are working to ensure that when the COVID-19 pandemic is history, the Floyd will still stand with open doors to welcome people back in for community events that will someday go down in the history books, they just need community help.