On Jan. 28, two regions — Puget Sound and West — advanced to Phase 2 of the state’s economic reopening plan, which allows limited indoor dining among other loosening of COVID-19 restrictions. Camano Island, part of the North Region of Island, Skagit, San Juan and Whatcom counties, remains in Phase 1 until at least Feb. 12.

“We’re in a region that doesn’t even represent necessarily our regional behavior,” Johnson said, adding that most Island County our residents would use hospital beds in Snohomish County, not Whatcom County. And as a result, “our economy is held back for factors they can’t control. It just is hard to justify.”

To advance to Phase 2, regions must meet three of four key health metrics. The key metrics: a 10% decreasing trend in case rates over a two-week period; a 10% decrease in coronavirus hospital admission rates in that same timeframe; an ICU occupancy rate that’s less than 90%; and a test positivity rate of less than 10%.

After a 90-minute meeting Thursday, the nine-member Island County Council of Governments voted to send a letter to Gov. Jay Inslee requesting Island County be released from the regional reopening plan.

“Historical and current success in managing through this pandemic, we believe Island County should be allowed to move to current Phase 2 or the Phase 3 stage we had achieved through our strategic actions,” the letter states.

During the virtual meeting, many COG members urged Joe Timmons, Inslee’s Northwest Washington regional representative, to recommend to the governor that Island County shouldn’t be lumped in the North Region with counties such as Whatcom.

“The recent decision (to use a regional-based phased reopening approach) has left us feeling … left behind and not included in decision-making,” Island County Commissioner Janet St. Clair said, adding that the county acted quickly at the start of the pandemic and was among the few that advanced to Phase 3 of the previous reopening plan.

“We’ve done extraordinarily well as a county,” St. Clair said. “The (new) phased plan is a real struggle for us. … We feel very strongly that it’s time to recognize that we’ve been partners in the process and we need that to be a two-way street.”

In an online briefing Thursday, the governor defended the state’s new regional approach, rather than county-by-county. The regional approach allowed two regions — including Snohomish County — to ease some restrictions, such as adding back some indoor dining.

Three lawmakers from the Olympic Peninsula also wrote to the governor, saying that his latest plan “has left Clallam and Jefferson counties at a standstill for no good reason.”

Like Clallam and Jefferson counties, Island County boasted low rates for much of the past year.

Hughes said that “it’s beyond frustrating, it’s insulting” that the Puget Sound region advanced phases and Island County did not.

“When we’re counting our numbers in 10s and 20s not tens of thousands, our statistics get skewed,” Hughes said. “It’s like we’re getting punished for being a good example.”

Johnson said Island County should still be held to the metrics, just not lumped with other counties.

“If you take us away from Whatcom County, a county that our citizens don’t really travel to at all … and look at us individually, we’re hitting the metrics,” Johnson said. “Hold us to a high standard and then look at us.”

Inslee said in his Thursday news conference that he understands frustrations, but he did not signal any changes were coming.

“To those who’ve argued that a county approach would be better, I understand those arguments,” he said.

But Inslee said officials opted for the regional approach because hospitals in different parts of the state share capacity across county lines.

“I want to respect people's right to give us some insights and as time goes forward look if we find a better way to do it we'll take it on,” Inslee said. 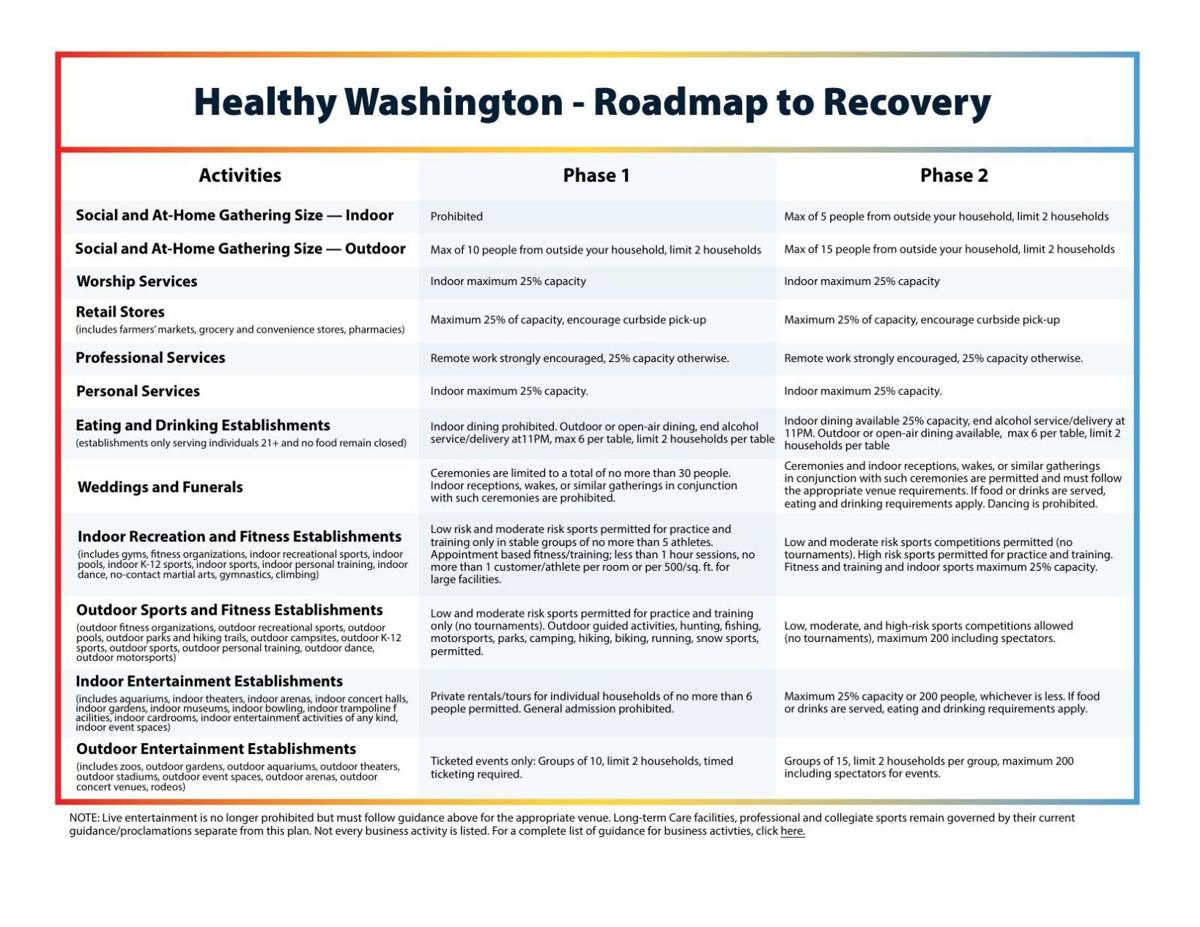 Camano Island advanced Sunday, Feb. 14, to the next phase of the state's plan to reopen businesses, as the rates of new COVID-19 cases and hos…