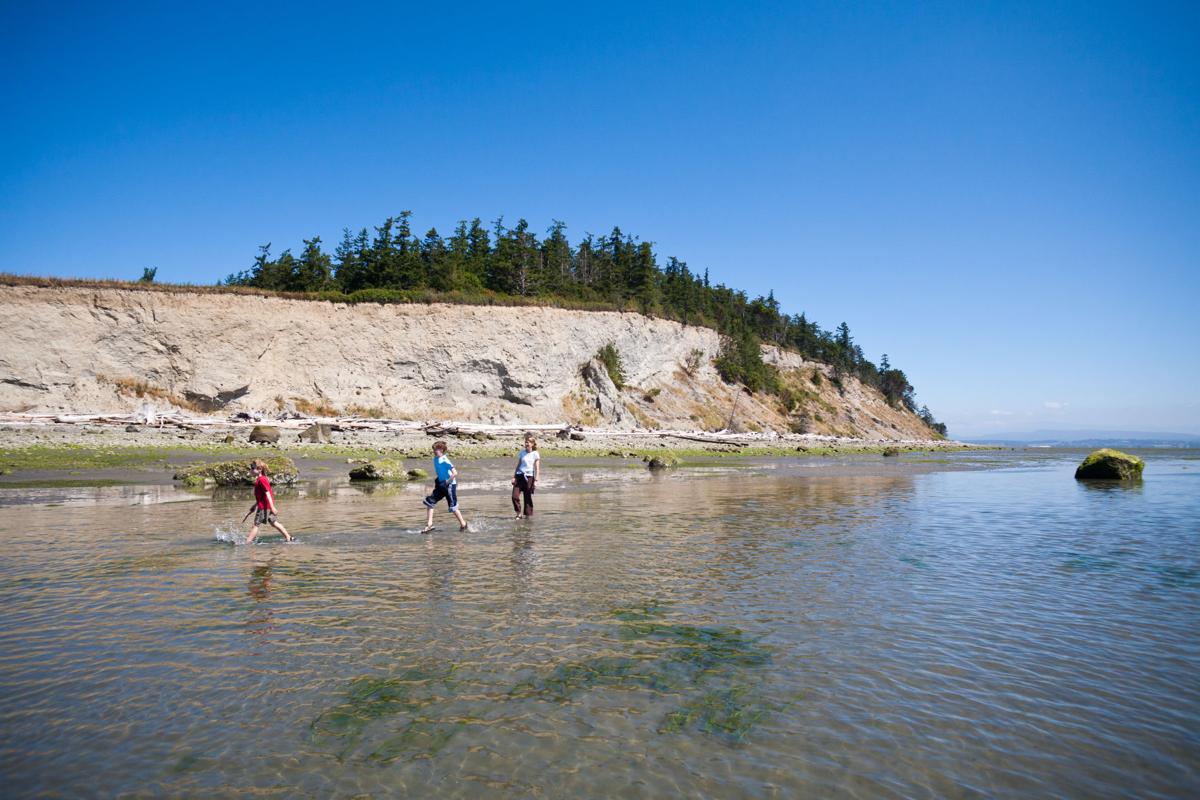 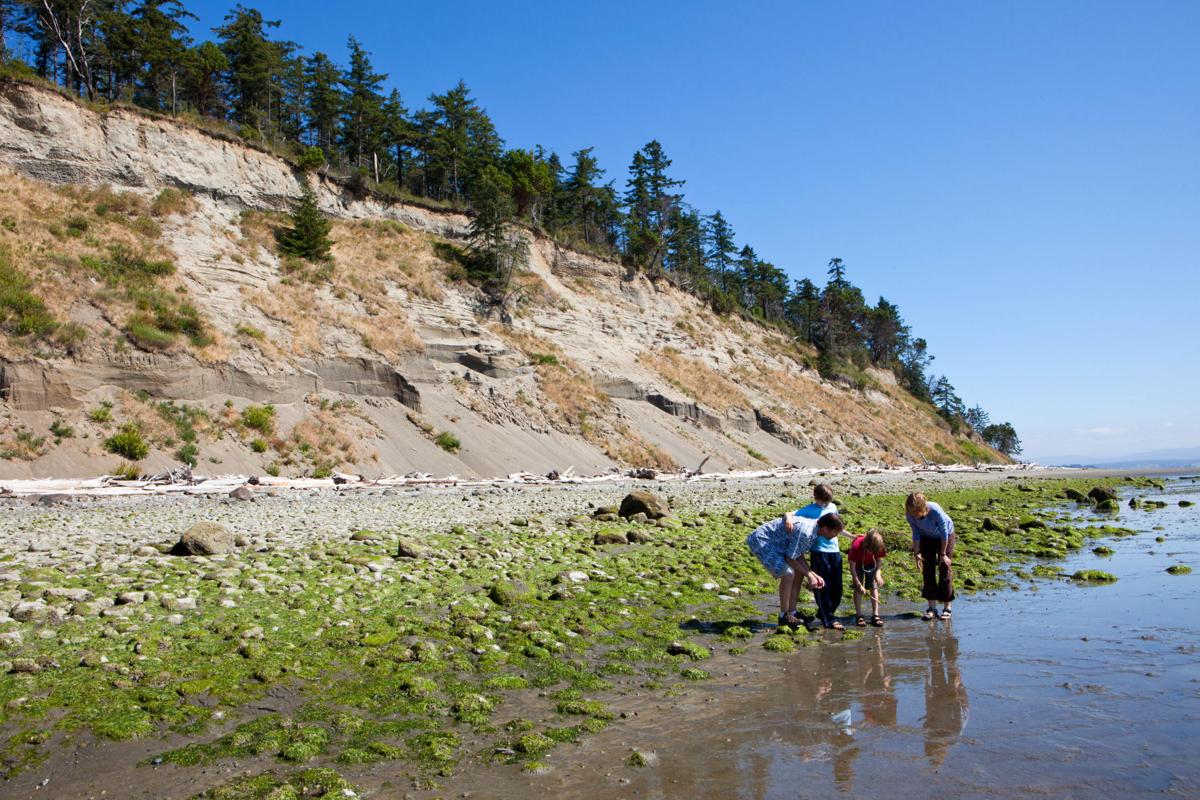 Below a bluff, a family bends down to look at wildlife in the low tide water. Barnum Point on Camano Island looks out over Port Susan Bay in Puget Sound, Washington. Natural shorelines with bluffs are important for feeding sediment into Puget Sound. 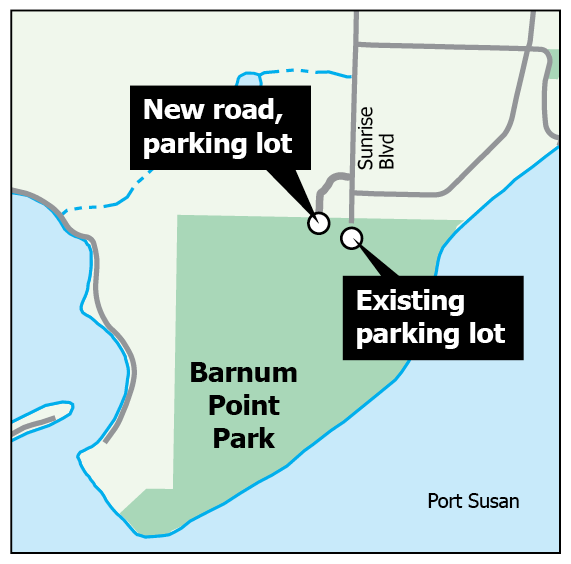 Barnum Point Park can be accessed at the south end of Sunrise Boulevard on Camano Island. Click here for a larger map. Old (existing) parking lot is no longer accessible. 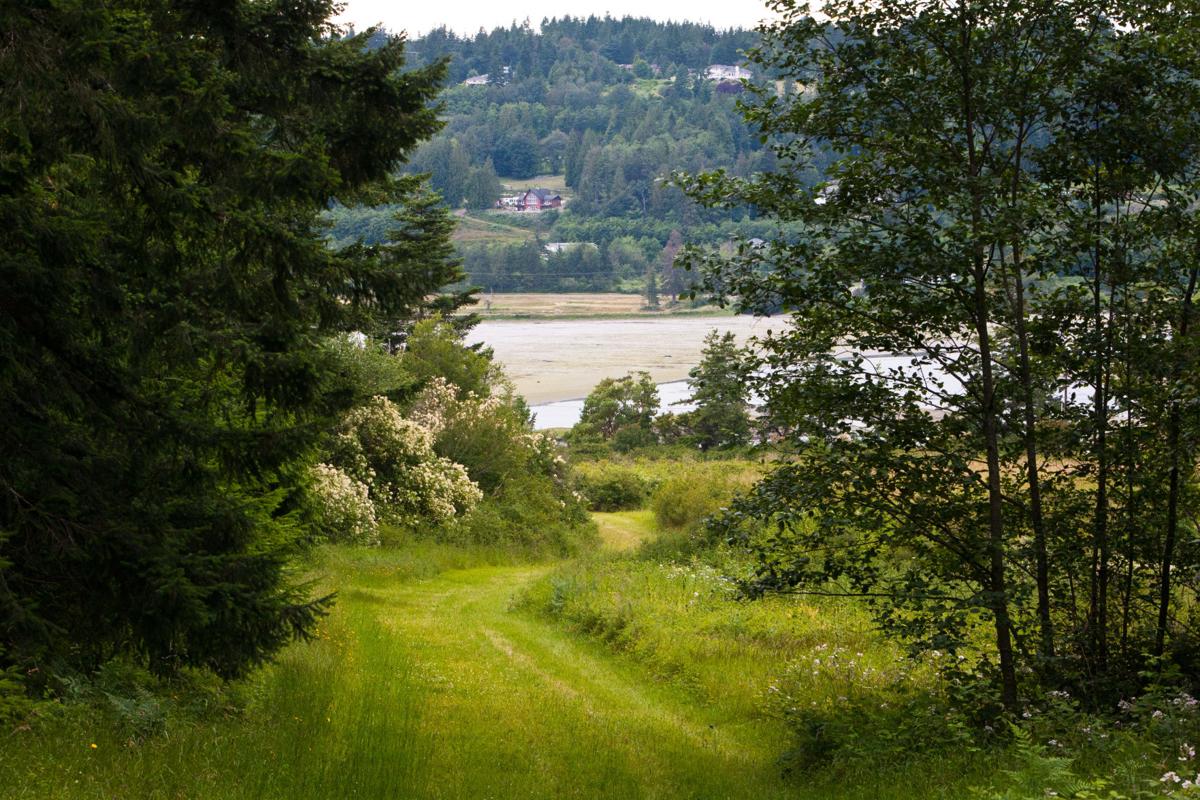 Triangle Cove peeps through the trees at Barnum Point on Camano Island, which looks out over Port Susan Bay in Puget Sound, Washington. Natural shorelines with bluffs are important for feeding sediment into Puget Sound. 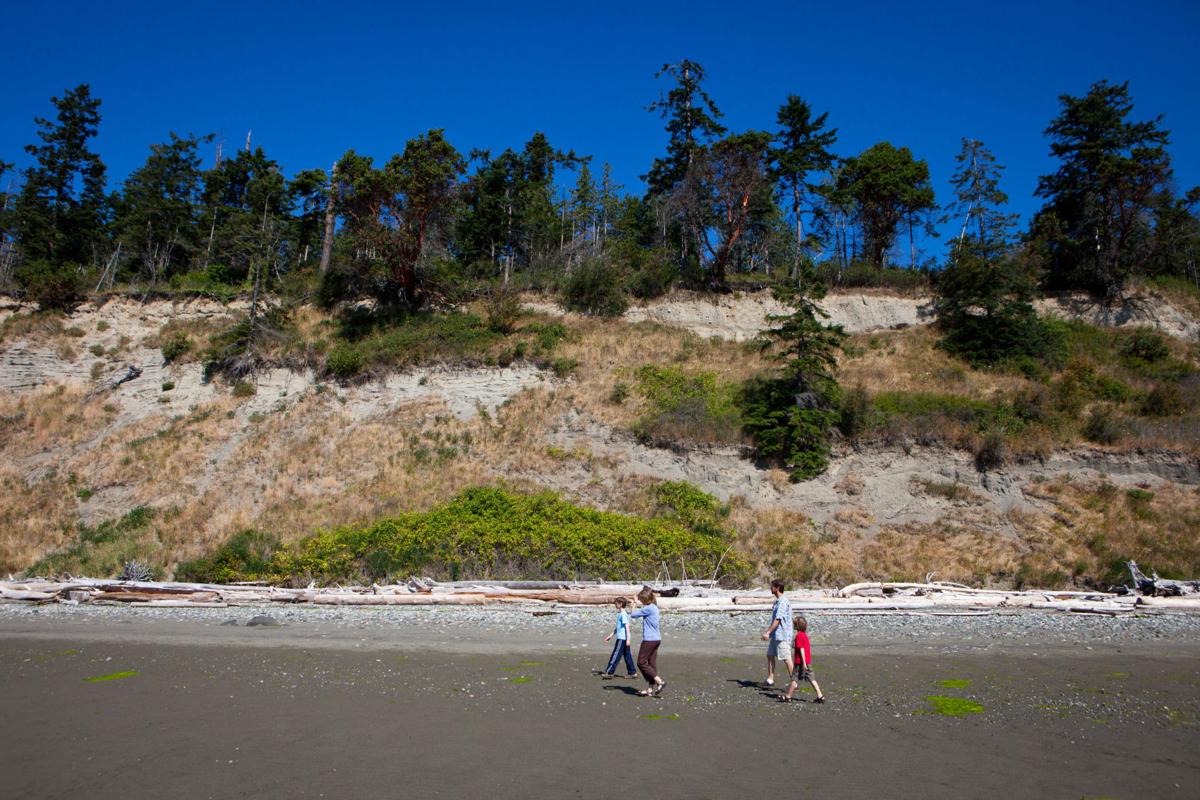 A family strolls along Barnum Point at low tide. Behind them, a bluff on Barnum Point ends abruptly at the shore, where the water had not yet worn it away. Barnum Point on Camano Island looks out over Port Susan Bay in Puget Sound, Washington. Natural shorelines with bluffs are important for feeding sediment into Puget Sound. 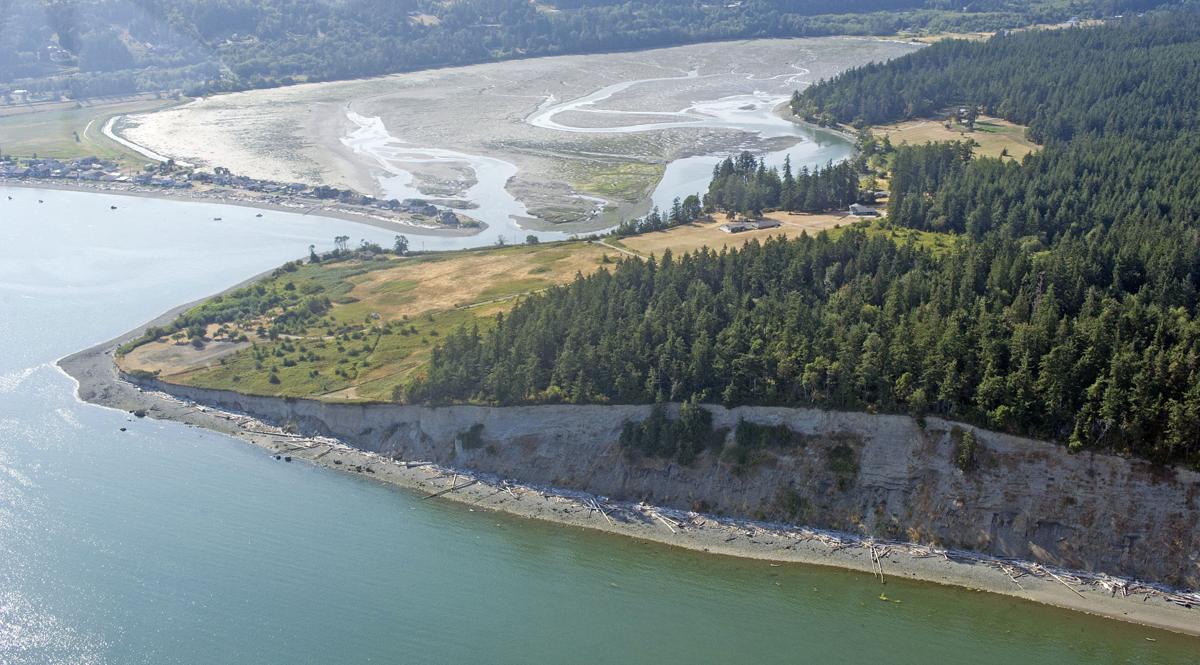 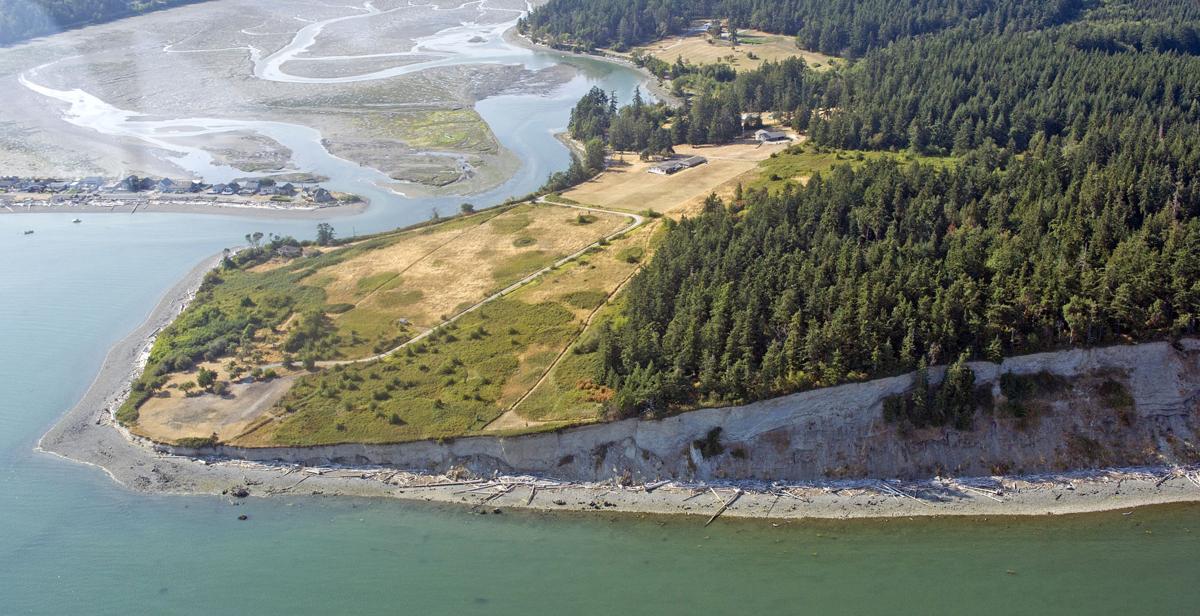 Aerial views above Stanwood and Camano on July 31, 2018. Barnum Point on Camano Island. The road shown in this image is not for public vehicle access. 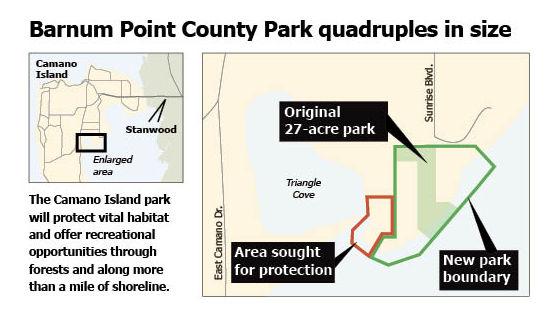 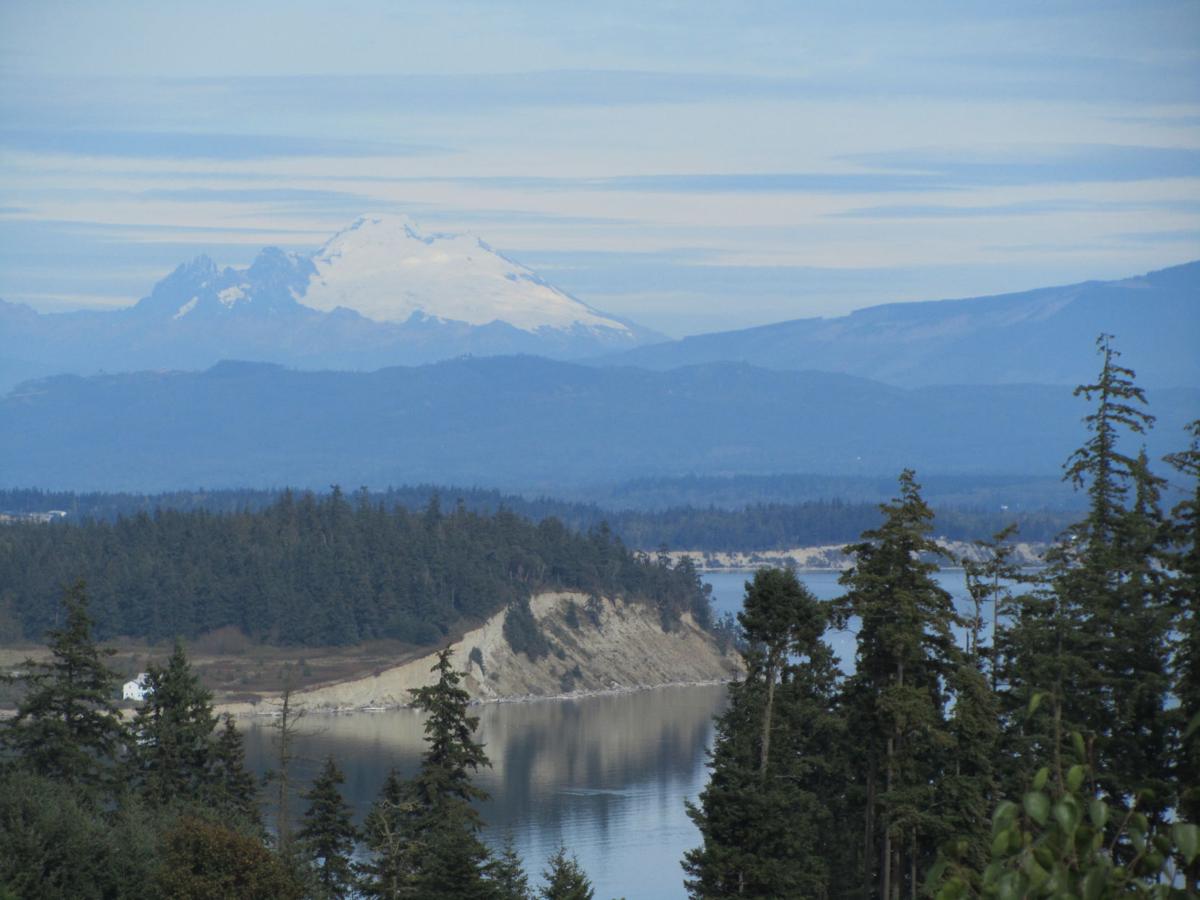 Below a bluff, a family bends down to look at wildlife in the low tide water. Barnum Point on Camano Island looks out over Port Susan Bay in Puget Sound, Washington. Natural shorelines with bluffs are important for feeding sediment into Puget Sound.

Carolin Barnum Dilorenzo loves Barnum Point so much that she sold prime waterfront to the county to preserve as a park for everyone to enjoy. She spent many years running the Inn at Barnum Point and recently moved to Warm Beach Senior Community across the bay.

“I feel like I still have the park, and you, and everybody else. I go over there often. The things the volunteers are doing really pleases me. So many people are making it nicer,” she said. “I miss the sunrises and the animals. But I have another nice place now.”

Trees obscure her westward view, but she can go down the road and see Barnum Point where she spent much of her life. Her father was born and raised there and when Carolin was a child it was the family getaway where all the relatives got together.

But in 2012, the county purchased the first Barnum parcel of 27 acres for a park, located at the south end of Sunrise Boulevard. The park rapidly grew to 169 acres between 2015 and 2018 as others sold land for the cause. And now it’s ready for others to explore.

But first, it helps to know Carolin’s family history.

Her grandfather, Sterling Jones Barnum traveled from New York to Parma, Idaho. There he married Mary (Mamie) Tucker and started a family. In 1904, he came out west, paid $1,500 for 110-125 acres and moved there with his wife and their three girls, Marie, Margaret and Kathryn. Carolin’s father, Robert (Bob) Sterling, was born the next year.

“It was a horrible house,” Carolin said. “When the tide was high and the wind came in the wrong way, it washed the floor.”

Camano Island was primitive and isolated in those days. The Barnums had an outhouse. There were no roads and they had to go to Terry’s Corner to get mail. They didn’t have horses so they walked a lot or rode an ox-pulled cart.

Mamie, Carolin’s grandmother, needed a rest and went back to visit her parents in Idaho where she’d lived in a real house and had piano lessons. While there, she died shortly after a chiropractor broke her neck.

“My dad was 2 at the time. Grandfather’s sister May came and helped raise the kids and cooked for loggers sometimes,” Carolin said. “Dad grew up on a farm with sheep and chickens. They’d put them in a boat and go to Stanwood and sell them.”

Since there wasn’t a high school on the island, Margaret rode her big wheel bicycle over the hill to where Onamac is now, to catch a boat to Whidbey on Monday morning. On Friday, she’d catch a boat back. During the week, she stayed with a family, earning her keep babysitting and housecleaning.

Grandfather was a justice of the peace and held court in his home. When people came all the way from Whidbey Island, his teenage daughter Kathryn would prepare a meal for them and then go out of the house with the other kids during court.

When Bob, Carolin’s dad, was older, he’d cross the channel and walk along driftwood to Cavalero to work in a mill.

As an adult, Bob left to attend the university in Seattle, where he married and raised his family. The family would be packed when he got off work and they’d drive to Barnum Point regularly.

“We used to drive over the bridge and not see a car all the way to Barnum,” Carolin said.

They had acres of natural lands to explore with beach, forest, wetlands, meadows and orchard.

There were stiles over the fences, “us kids got such a kick walking over them,” she said. “We had fun. There was a bridge with a troll underneath. We couldn’t see him, but we had to ask permission to cross.”

They had “Ferdinand” in the fenced orchard.He was friendly and came running up to the kids. One day Ferdinand disappeared. At dinner, Carolin recalled their dad saying, “that’s Ferdinand on your plate.”

She’d heard there were underground faults at Barnum.

“Dad was a lumberman, we learned all about the trees and their bark. He built trails and kept them open,” Carolin said.

Somewhere in the woods, they found fawn lilies with leaves spotted like a fawn.

“My dad would take people up to see them whether they wanted to or not,” she said.

He built lean-tos for camping.

“We’d come and chase out the bats. We kids slept with bedding over our heads so the bats couldn’t get us. Now I’m older and know that bats are our friends,” Carolin said.

As an adult, when Carolin ran the Inn at Barnum Point, a guest, who had apparently spotted a bat, told her, “Last night I saw the biggest moth I’ve ever seen, and it had red eyes!”

Carolin ran the inn for 26 years, surrounded by nature. She saw a porcupine sleeping in a tree and river otters barked at her when she got too close.

“I felt like Snow White, with all the animals that were there. I even had a cat that would babysit fawns,” she said.

Once when fawns had been left all day by their mother, Carolin’s tamed feral cat stood guard. Sue Murphy of Pilchuck Wildlife came to get the “abandoned” fawns.

“By the time one fawn was in her vehicle, here comes mom over the hill! We quickly placed the fawn between us and the mother and the cat went over and told the mom it was there.”

The property kept six generations of family together; all the cousins, aunts and uncles gathered there, she said.

In the 1950s, Sterling’s children came back to retire and built homes.

Of the third generation of Barnums, Earl Lawrence Stay deserves credit as the first to rally the relatives to preserve the property as a park. He wanted the state to buy it, but the state didn’t have money at the time. After he died, his sons Ed and Bob took up the cause, Carolin Barnum Dilorenzo said.

The Barnum family was joined by Whidbey Camano Land Trust, the community and the county in the successful effort to preserve the property for the public.

“We loved the land,” Carolin said. “We have lots of people who love it. My kids can always come back, because it’s all of ours now and the county can afford to do things we could never do.”

Paving started last week for Barnum Point County Park’s larger new parking lot. This land is the latest to be added to the park, located on what was Leavitt’s Holly Farm, a 40-acre tract north of the other tracts.

With good weather, the parking lot should be finished this month, within two to three weeks, he said.

When the larger lot is complete, the smaller, existing parking lot will be closed.

The county will remodel the Holly Farm’s existing 3,000-square-foot shop and use it as the new parks shop, putting a county presence in the park.

Editor's Note: corrections and additions were made on June 4 and June 7 to this online story that are not in the June 4 print edition.

Your guide to the Stanwood-Camano area, including events, trip ideas, kid-friendly adventures and more!

Two years ago Freedom Park on Camano Island was on the brink of closing.

Most-read stories on SCnews.com during June

The city of Stanwood is evaluating how to calculate developer park impact fees so that new park costs are fairly distributed.