Snohomish County opened its third drive-thru COVID vaccine clinic last week, one of six officials plan to eventually open, including at a site near Stanwood.

The undetermined site near Stanwood will be modeled after the drive-thru clinic that opened in Monroe at The Evergreen State Fairgrounds, North County Fire and EMS chief John Cermak said. These sites are coordinated by the Snohomish County Vaccine Taskforce, which brings together public health, emergency management, law enforcement, fire and emergency medical services, human services, transit, public works and other partners within Snohomish County.

Gov. Jay Inslee announced Monday the state is speeding up the vaccination process by creating new sites, mobilizing more workers and making everyone 65 and over immediately eligible.

Inslee said the state is now beginning Phase 1B, tier 1, which now includes those 65 and older. Previously, it include people 70 and older. About 80% of the state’s COVID-19 deaths are among those 65 and older, Inslee noted. The change adds nearly 400,000 people to the 1B group.

The new effort’s goal is to administer 45,000 vaccinations a day, which is more than double the current number. Reaching that goal would require a bigger allotment that the state is getting from the federal government, but this upgraded infrastructure could help pave the way, Inslee said.

The state is setting up four new vaccination sites in Spokane, Kennewick, Wenatchee and near Vancouver. Inslee said the state will send volunteers to help vaccinate at sites, including at sites in Snohomish, King and Pierce counties.

Inslee said new mandates include that 95% of vaccine allocations be administered within a week of receipt and providers must submit vaccine data to the state within 24 hours of administration.

Another change is allowing those in phase two through four will now be able to get vaccinated once half of those in the first tier — 1A and 1B — are vaccinated.

For more info and to find your vaccination group, visit FindYourPhaseWA.org.

“We can deploy (the Stanwood area location) within three days when given the green light,” Cermak said. “My guess is that within a week of that, we can be up and running. But right now, we’re more concerned about when we will get the vaccine.”

The three drive-thru sites in Monroe, Everett and Edmonds are giving vaccinations to those in the Phase 1A group, such as health care workers, some first responders and residents and staff at long-term care homes. The drive-thru is only by appointments, which are made at snohd.org/covidvaccine.

“Our goal is to ensure that we vaccinate the residents of Snohomish County as quickly, efficiently and safely as possible,” Snohomish County Emergency Management Director Jason Biermann said. “We have been saying since the start that the first line of defense is our healthcare system. We are here to help augment them, so together we can meet our goal.”

Capacity will vary depending on vaccine supply and other resources, but up to 940 vaccinations can be administered per day between the three sites at this time.

These drive-thru sites are meant to supplement the existing healthcare system, which continues to provide most vaccinations, health officials said. However, if needed, the drive-thru locations can scale up to allow more traffic.

“We’re trying to be ready to go when we’re needed,” he said, adding that details are still being worked out with county and state officials.

Yengoyan said the tentative plan is for a drive-thru vaccination clinic at the Camano Center, relying on a mix of clinicians, EMTs and volunteers to operate the site.

State Department of Health announced the state is moving into Phase 1B, tier 1, as of Monday.

Phase 1B, tier 1, includes people 65 and older, as well as anyone 50 and older who lives in a multigenerational home. The state recommends those eligible for the vaccine in Phase 1B first contact their primary care doctor to try to schedule an appointment.

“We have to do it well, and we have to do it right,” state Secretary of Health Umair Shah said. “It’s all about striking a balance between speed and proper process as we distribute vaccines. We’re going as fast as we can, but we need to do better, and we will. To our community we want to say: We’re on it. Finding the right balance is the key to success for the future, and that’s our goal.” 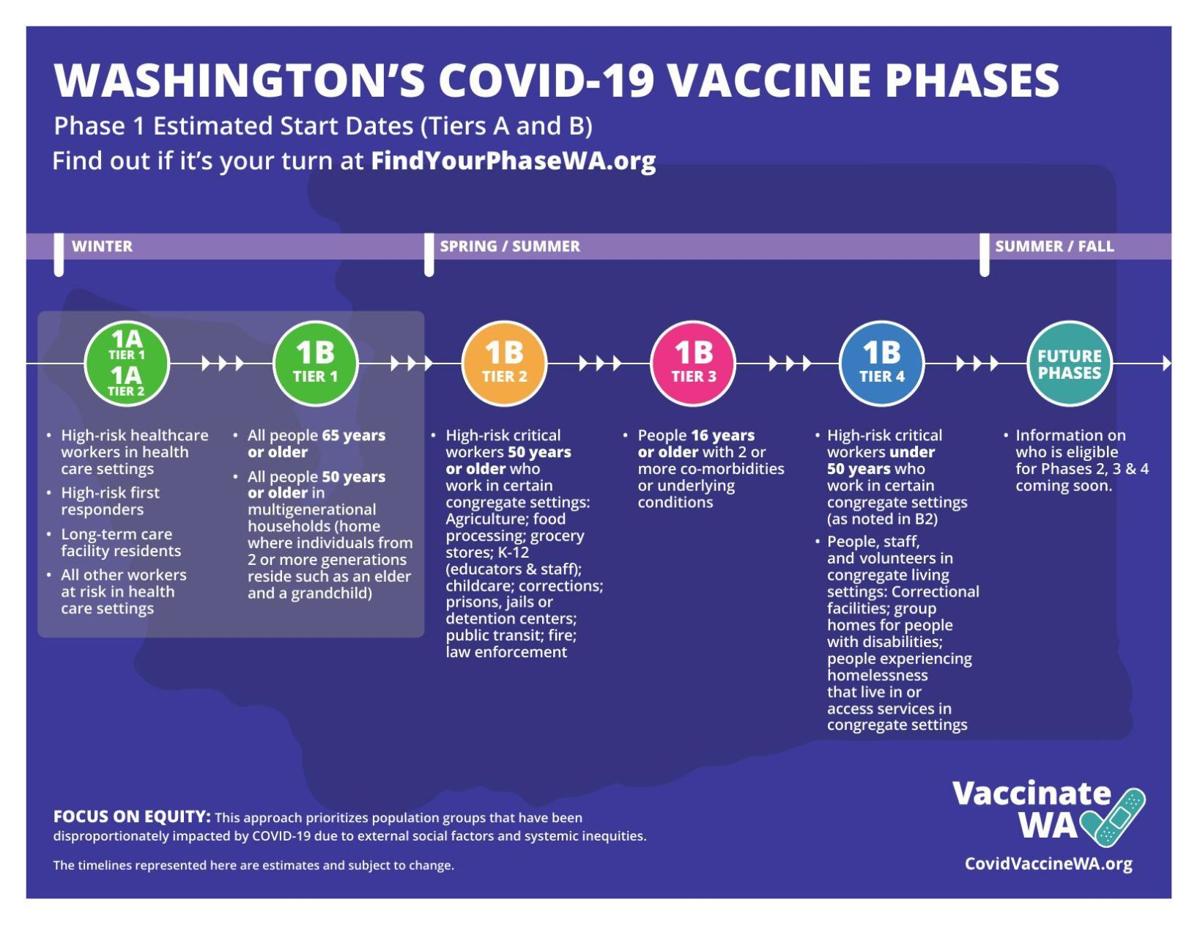 Stanwood isn’t letting a pandemic slow it down. “2021 is going to be a busy, active year. Lots of projects,” Stanwood mayor Elizabeth Callaghan said during the annual State of the City address.

Local seniors get vaccine: 'There is light at the end of the tunnel'

Jennifer Flax sprung out of the chair wearing a giant smile. “I feel so relieved,” she exclaimed moments after receiving the first dose of the Moderna COVID-19 vaccine Friday at Stanwood Community & Senior Center.