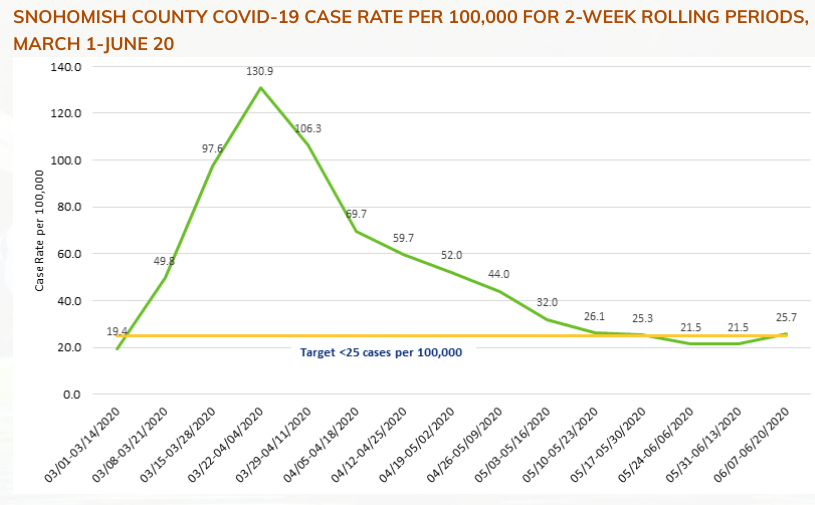 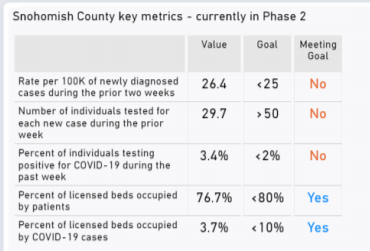 Snohomish County isn’t ready yet to apply for Phase 3 of the state’s “Safe Start” reopening plan.

“I know if we applied today we would be denied,” Snohomish County Executive Dave Somers said Friday. “We were very hopeful that we would be able to move to Phase 3 quickly, but we really need more time to see if this trend is an anomaly or a longer term trend.”

Friday marks three weeks since Snohomish County moved into Phase 2, making the county potentially eligible to apply for Phase 3. However, the number of new COVID-19 cases has been increasing during the past week, similar to what other counties in the region are reporting.

“In reality it suggests to us that there are positive cases out there that we previously weren't aware of and they could be spreading the disease,” said Dr. Chris Spitters, health officer for the Snohomish County Health District.

“This group (of new cases) is a little bit younger than average,” Spitters said, adding that typically means fewer hospitalizations. “And most of the cases either are known contact of someone that had COVID, and so that's relatively reassuring because we can connect them to someone.”

However, some hotspots remain in the county.

While Everett has typically seen the most cases, Marysville is emerging as an area where there are more cases, Spitters said.

“We've been getting various reports from the community about large gatherings occurring, and in a manner and size that are quite large,” Spitters said.

Then on June 19, a party of up to 70 people in Stanwood had one attendee who was positive for the coronavirus.

Spitters said the Health District started contact tracing, but discovered the host and the core friends of the host didn't know many of the attendees, making contacting people more difficult.

“If you are one of the people who attended that party, we, the Health District recommends that you, we consider you exposed to COIVD-19,” Spitters said. “We don't know how close your exposure was to the case that was detected there. But, consequently, we're recommending that you stay home until July 4 — the 14 day incubation period. And we recommend that you go ahead and seek testing.”

The Stanwood party isn’t the only large gathering the Health District is investigating.

“Many other large gatherings have occurred that are not among the weddings and funerals that are permitted through the governor’s safe start guidance,” Spitters said. “These are just spontaneous or planned gatherings that exceed the permitted size. … So we’re just encouraging people to limit your gatherings to permitted sizes, which is five people who are not your household members.”

To the north, Skagit County also seems unlikely to be ready to move into Phase 3 of the governor’s Safe Start plan, according to public health leadership.

Meanwhile, health officials are urging people to wear face coverings while in public, which is now required statewide.

“I think our overarching message is that we need everyone's help to move ahead to Phase 3 and 4 and beyond,” Spitters said.

The City of Stanwood has been notified the large party that took place over the weekend happened in Stanwood. Over 50 people attended the party where one guest was symptomatic for COVID - 19. Read more on our website- https://t.co/DyJAdlbk4K

Executive Somers and Health Officer Dr. Spitters joined us today to provide updates on COVID-19, including why Snohomish County is not in a position to move to Phase 3 of the Safe Start plan at this time.

Many pandemic business trends are likely here to stay

Local small businesses and organizations rose to the challenge of creating safe ways to interact with the public and stay connected during the pandemic. Some of the changes adopted by shops, services and churches are likely to become permanent.

Snohomish County logged 77 new COVID-19 cases on Monday — the largest one-day tally since early April. In addition, officials are investigating a large party over the weekend with more than 50 people where one of the guests was symptomatic for COVID-19 and later tested positive.

Snohomish County could drop back to Phase 1 if spike continues