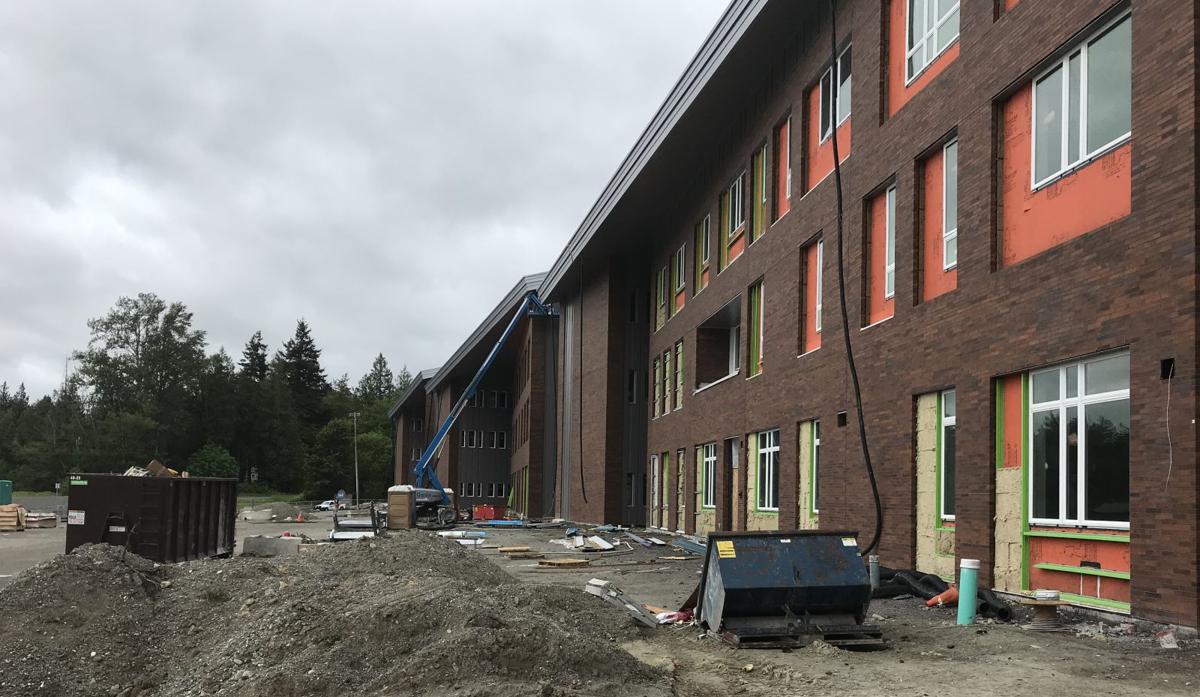 Scenes from the Stanwood High School building construction. A view outside the south side.

“We’re still on schedule, but we’re going to do a big reevaluation next month to make sure,” said Liz Jamieson, construction manager for the Stanwood Camano School District.

When the state began shutting down parts of the economy in mid-March, the campus construction project saw a dip in workers as some subcontractors stayed home. But the project never stopped and staffing levels are now back near 100%, Jamison said.

However, as the buildings inch closer to completion, some jobs will be harder to do while maintaining social distancing guidelines, she said.

About 130 people are working daily at the high school site, and about 80 people a day are working on the Church Creek Campus, which is slated to be complete this summer.

Here’s a panoramic time lapse of the Stanwood High construction so far. pic.twitter.com/PCDPxBNP1i

Most of the brickwork is complete, and passersby on Highway 532 will next notice the window sunshades and metalwork being installed on the high school building in the coming weeks, Jamison said. Then, crews will begin preparing the site for landscaping.

“It will soon start to look more finished,” she said.

Some work, such as roadwork near the high school along both 72nd Avenue NW and 272nd Street NW, was able to be completed ahead of schedule because classes were canceled. The work involves improving underground utilities, widening the road and creating a treeline buffer between the road and a new sidewalk. In addition to the street work, Stanwood-based Taylor's Excavators started preparing the baseball and softball fields for artificial turf installation.

Jamison gave an update on the $147.5 million project during the virtual Stanwood-Camano School Board meeting May 19 using the online Zoom platform.

Approved by voters in 2017, the plan calls for a new high school building being move-in ready late this year as well as a new Church Creek Campus to house Lincoln Hill High, Lincoln Academy and Saratoga School ready to welcome students by fall.

Jamison also said the pandemic has allowed crews to get an early start on installing new playgrounds at Elger Bay, Utsalady and Cedarhome elementary schools.

Students, staff and volunteers were honored during the virtual board meeting.

Volunteer Service Awards went to Heidi Vitali for her work at Lincoln Hill High School and Barbara Crow for her contributions to Saratoga School.

Classified Employee of the Month was awarded to Stanwood Elementary custodian Rick Houk.

The board also honored its student advisors for the past school year: Lincoln Hill High’s Jacob Platt and Stanwood High’s Aleena Wiegand.

The Stanwood Camano Area Foundation presented scholarships to 123 local graduating seniors during the annual Scholarship Night on May 26.

Stanwood planners are riffing on old ideas to give the city a new look, possibly including one-way streets and pedestrian plazas to revitalize east and west business areas.