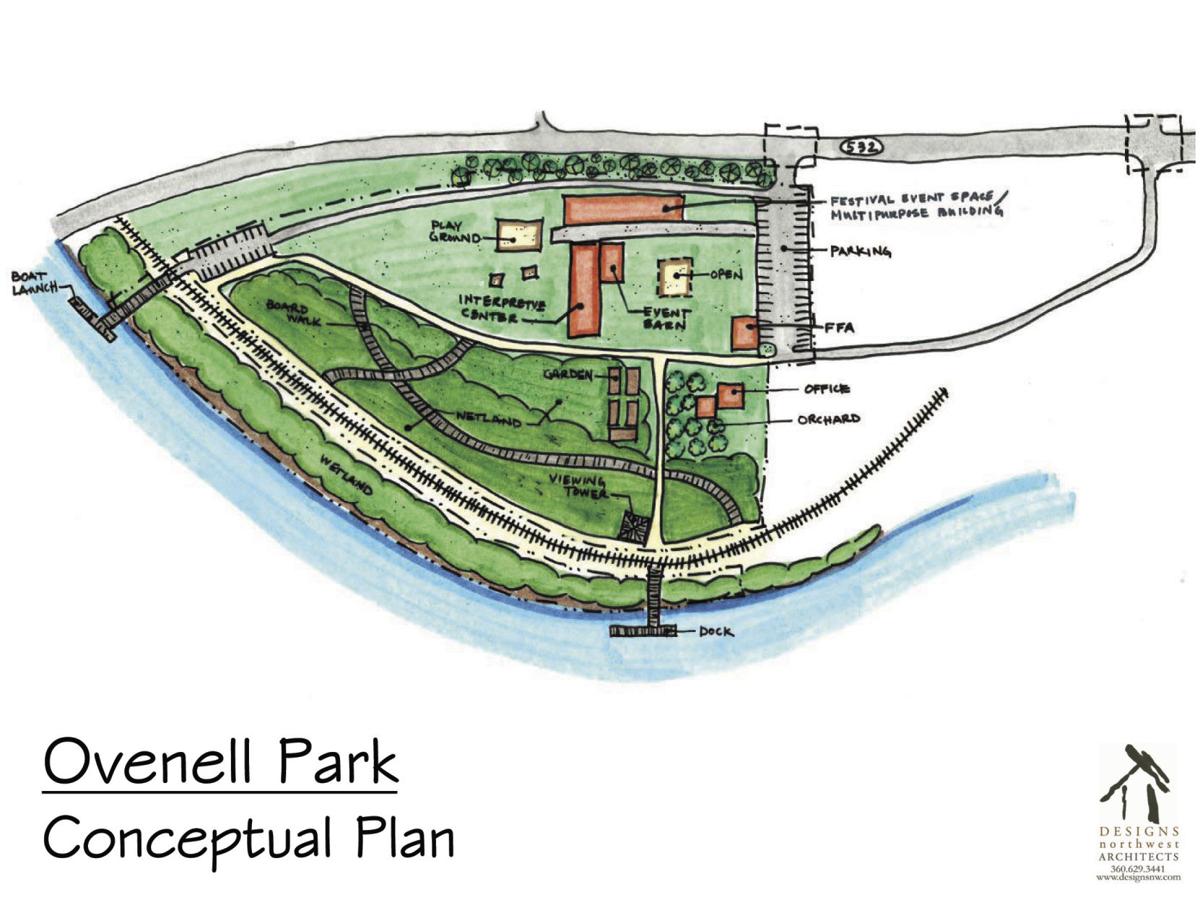 Ovenell Park, south of Camano Gateway Bridge, is about a half mile from Hamilton Landing, along the Stillaguamish River. Twin City Foods is between the two future parks. 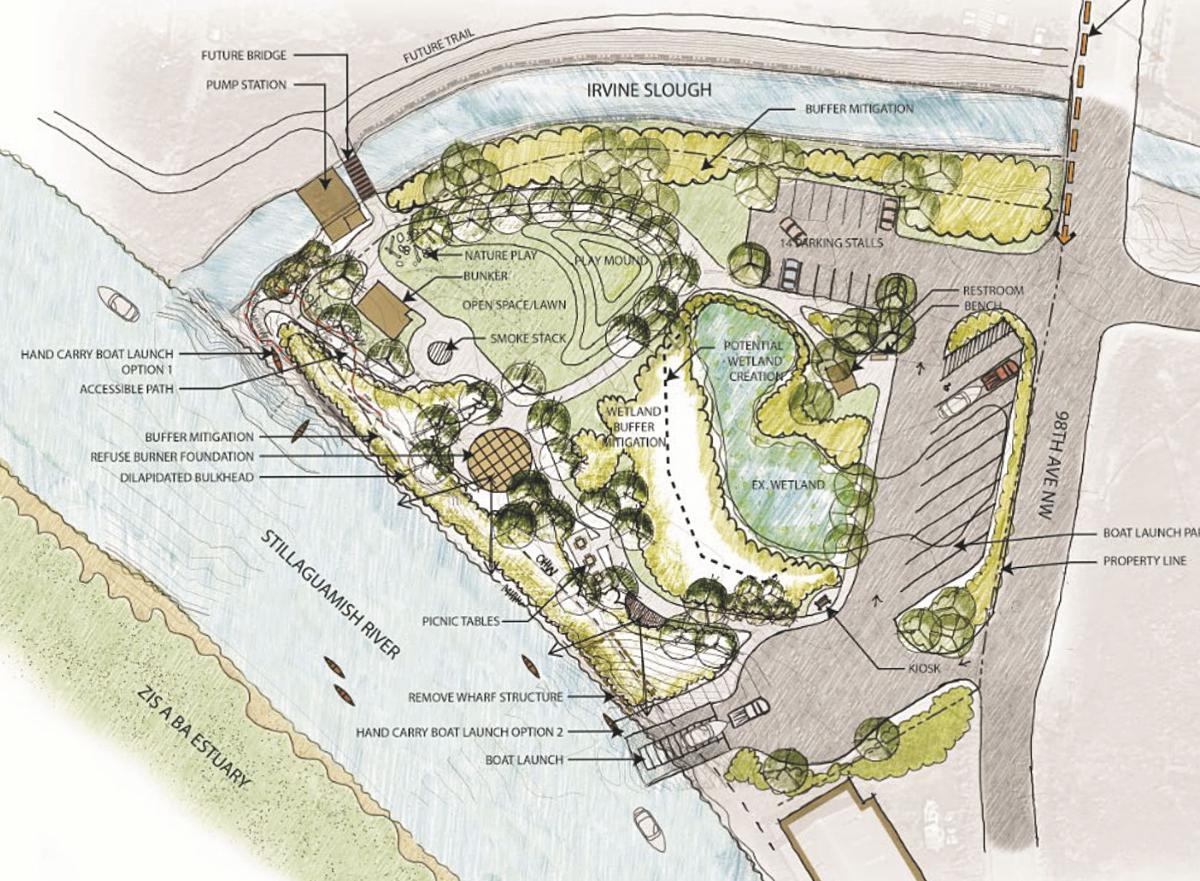 Construction of Hamilton Landing Park is planned for summer 2020.

Ovenell Park, at left, will include a boat launch and dock in the river, viewing tower, a boardwalk through restored wetlands, an interpretive center, event barn, shelters and parking. Hamilton Landing, at right, will retain the smokestack, and add a boat launch, seasonal dock, viewing platform, a plaza with a labyrinth, a play and picnic area and a wetland, with historic information plaques.

Ovenell Park, south of Camano Gateway Bridge, is about a half mile from Hamilton Landing, along the Stillaguamish River. Twin City Foods is between the two future parks.

Construction of Hamilton Landing Park is planned for summer 2020.

Banners will be officially revealed at the site of Stanwood’s future Ovenell Park during a 3 p.m. ceremony Oct. 21 at the north barn on SR 532.

Ovenell barn will be decorated with banners depicting historical photos to honor the past uses of the historical farm property.

The banner project will serve as a entryway to Stanwood on the mainland side of the Camano Gateway Bridge.

The display is a team effort several years in the planning between the city’s Parks and Trails Advisory Committee, Friends of Stanwood Parks and Trails members, the Ovenell family and Stillaguamish Tribe.

City officials don’t have an opening date for Ovenell Park  or the planned Hamilton Park. Instead, they will be developed in stages as money allows.

An appeal hearing is set for 10 a.m., Friday, Oct. 25, regarding the city of Stanwood’s decision to allow a crematory downtown in the Mainstreet Business I zone.

Hearing Examiner John Galt will soon determine details of how the hearing will be conducted.

The hearing is tentatively set to be held in the North County Regional Fire Station 99. Galt has contracted with Stanwood since around 2000 and has served many other cities, including Lynnwood, Monroe and Lake Forest Park.

Stanwood resident Peggy Kitting filed the appeal on Aug. 30 saying, “I am not opposed to having a crematorium in Stanwood, but not that location. I am looking forward to the city’s addressing the issue of an industrial-strength incinerator not being permitted anywhere within the city limits.”

Stanwood resident Peggy Kitting, with support of others in the city, doesn’t want a cremator…

The City Council approved a $33,353 contract with the state archivist for imaging services, with an umbrella agreement not to exceed $38,000 during the Council’s regular meeting Thursday.

Finance Director David Hammond said the project that will create digital images of 40 boxes of building permits issued from 1996 to 2013.

Building permits are the most frequently requested type of document. The city must maintain each permit for the life of the building plus six years. Digitizing them will save staff time and storage space.

Records have been filed through the years by permit number; addresses aren’t always known before development. People making requests don’t often know the permit number, so staff has to research to fulfill each request.

The project will streamline the process, indexing each digitized permit by number and address.

The city has applied unsuccessfully for grants to offset digitization costs and hopes to win grants to digitize records from 2014-2018 and prior to 1996. Permits have been scanned since 2019.

“This is an effort to do half of them, which puts us in a good position for the next (grant) cycle,” Hammond said.

The Council also had a first reading of a lodging tax ordinance, which would create a fund and establish an advisory committee.

The proposed lodging tax is not expected to immediately generate a lot of money, but it will provide data to help determine the demand in the area for a hotel in Stanwood, Hammond said.

Snohomish County levies this tax, so the proceeds will go to the city instead of the county.

Council approved a task order not to exceed $66,181 with RH2 for rehabilitation predesign work at the sewer main pump station.

Public Works Director Kevin Hushagen said the main pump station was rebuilt in 1999 and is in need of an evaluation of its capacity to accommodate future needs.

Nearly all of the city’s sewage goes through the pump station, which is at the low point. The capacity and design of the sewer main pump station is considered a potentially limiting factor in regard to new development.

The evaluation will give an idea of what is needed to be designed as the city continues to grow, Hushagen said.

During the business portion of their Thursday meeting, Stanwood City Council members accepte…