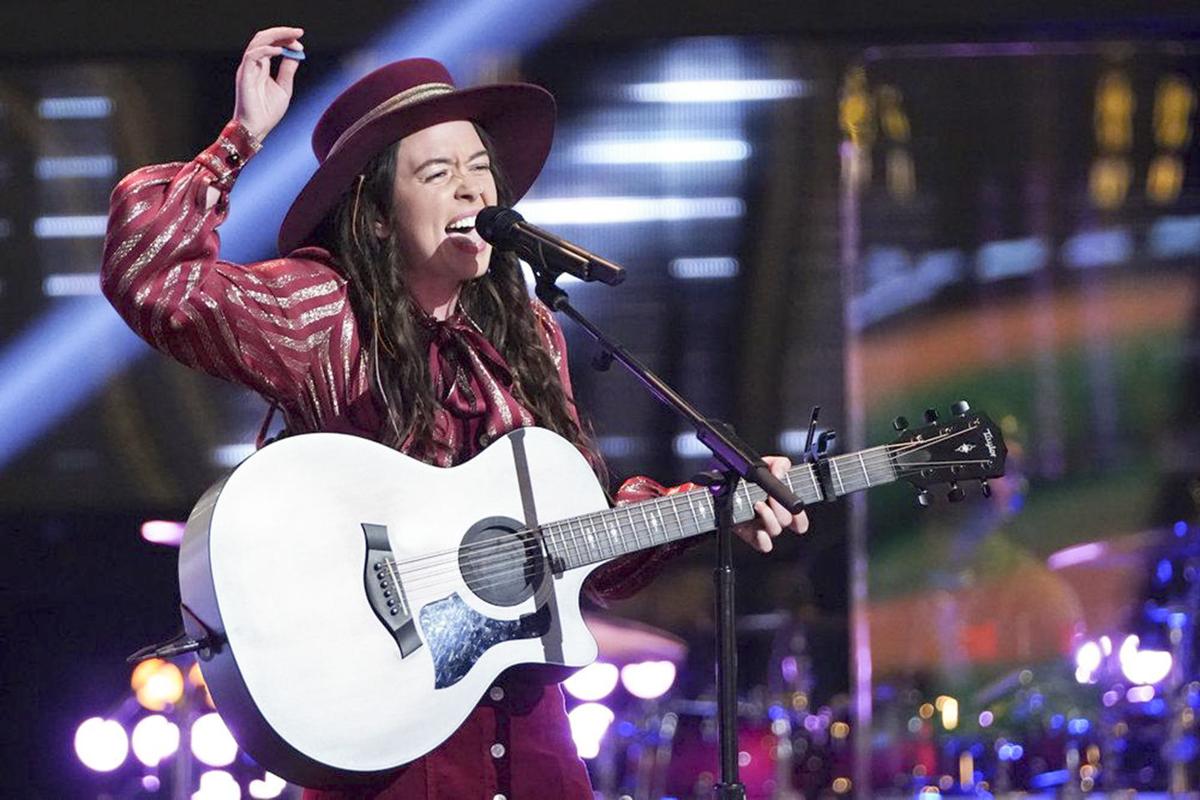 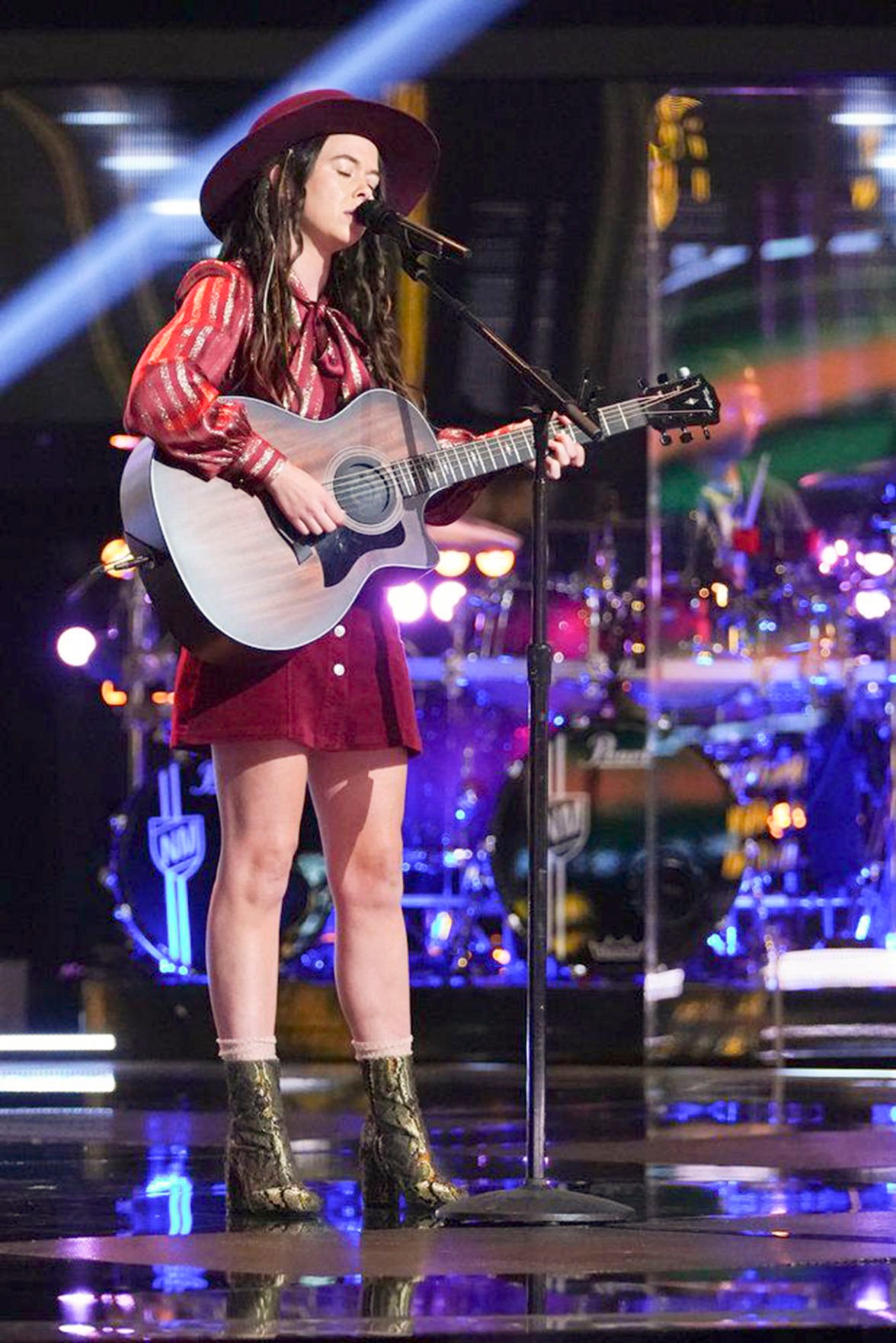 Woods, 26, competed in a blind audition that aired last week on “The Voice,” a NBC television series in its 20th season. The televised contest looks for unsigned singing talent.

She scored a spot on Coach Kelly Clarkson’s team.

Clarkson described Woods’ voice as: if Patty Griffin and Nirvana had a baby. Clarkson said she hasn’t heard anything like Woods in the six seasons she’s coached on “The Voice.”

“When people ask me what genre I play, I call it ‘Americana grunge,’” Woods said in an interview with the Stanwood Camano News last week.

Americana is her softer folksy singer-songwriter side. Grunge is the raspy rocker. She mixes both for a unique sound.

Some time ago in a rock band, Woods learned to sing louder to be heard above the instruments.

“Sometimes you have to yell the note, yell in pitch,” she said. “It’s like a controlled scream; it’s grungy.”

After a long pandemic year of canceled gigs, Woods said it was exhilarating to be on a stage, especially the snazzy stage at Universal Studios in front of a wall of video panels showing the virtual live audience.

“I like ‘The Voice’ over other competition-based shows because it’s positive-minded,” Woods said. “There is assistance, and they are helpful and awesome before we get onstage. We had a lot of COVID protocols.”

Celebrity coaches Kelly Clarkson, Nick Jonas, John Legend and Blake Shelton sat in electronic thrones with their backs to Woods. They judge purely on the sound of her voice. Each coach can only choose 10 singers to add to their vocal team for further stages of the competition. To choose a singer, a coach hits a big button and turns their chair to face the artist. The chair lights up to say, "I want you."

Woods strode confidently onto the vast stage with dreadlocks flowing to her waist from a matching Bolero hat. A tattoo on her calf peeked over her ankle boots. Backed up by the house band and her own trusty guitar, Woods sang the song, “Zombies” by The Cranberries.

Seconds into the song, as Woods’ soft, small vocals cranked up to large and loud, Nick Jonas turned his chair. He was the only one facing her for the entire song. The others had their chair backs turned, so she couldn’t see them grooving along.

“When I’m singing, I don’t know what’s going on behind those chairs. When Nick turned I was relieved, I knew I made it,” Woods said.

Just as the song hit the final beat, Clarkson hit the button and turned.

All the coaches gave immediate feedback.

Jonas told her, “I think you’re incredibly laid back and to have that contrast with those big rock vocals is very impressive.”

Legend said, “I particularly liked those moments when you were wailing and you were hitting those notes with so much electricity and edge in your voice.”

“Yeah, baby,” she replied and laughed along with everyone.

“I like a creepy kind of vibe,” Clarkson said. “I love Billie Eilish, Fiona Apple, The Cranberries; I think that sultry sound is kinda cool.”

After the show, Woods said she liked being called creepy, because of the artists she was compared to.

“It’s breathy control. I know what she’s talking about because I do it on purpose,” she said.

The road to now

Woods has never had coaching. Instead, she’s been singing and composing all her life, working on her skills on her own.

Woods was born into a musical family and often sang with her two sisters. The three girls were three years apart, with Woods in the middle. During school years in Stanwood, they were the go-to girls for music at school or church.

Before the pandemic, Woods played solo and in groups around the area at farmers markets, festivals, benefits and venues.

She stepped it up a notch and traveled the world. For the past three years, she’d record a song wherever was — Iceland, France, Italy — and posted it on the Savanna Woods Music Facebook page.

“It started pushing me out of my shell,” she said.

She still posts concerts on “Wandering Wednesdays,” but because of the pandemic, most concerts are from home.

Without gigs during the pandemic, Woods decided to try out for “The Voice” instead.  She entered the initial online audition, which led to the big stage in Los Angeles. Her song choice was influenced by two of the 20 foster kids that her parents hosted in the past five years.

“They always wanted me to play that song when they came to my shows. They love to rock out with me,” she said. “So many kids need homes, just in our county. My parents wanted to make a difference, to help kids in need out.”

The song, “Zombies” starts with, “Another mother's breaking heart is taking over.”

“I think that a coach can teach me and help me so much because they are in a place I want to be,” she said.

Woods thought before she auditioned, that if she could, she’d chose Clarkson.

“It was pretty exciting to have Nick Jonas and Kelly Clarkson fighting over you,” Woods said. “In the moment, it was really hard to choose. Nick had some beautiful things to say. Nick heard it right away; he wanted me.”

In the end, Woods chose Clarkson because she came from a competitive environment, and they had similar styles.

Next comes the Battle Rounds, Knockouts and then the Live Performance Shows.

In the Battle Rounds, Woods will be paired with someone from Team Kelly to sing a duet together as they compete against each other. Clarkson decides the winner.

Just to make it more complicated, a coach can save the loser for a four-way knockout, and other coaches can steal a loser.

Woods looks forward to professional coaching and doesn’t fret about what’s ahead.

“My only goal was the blind audition, so already I’m winning in my eyes,” she said.

I love YOUR vibe! I’m already thinking of so many song ideas for us to...DUET 😏😜 https://t.co/jLsjDkCVvq

Thanks everyone for all of your kind words 🥺😍 https://t.co/XGdQ5ZuwuE

New episodes of NBC's "The Voice" air Mondays and Tuesdays at 8 p.m. and on the Peacock streaming service.

Savanna Woods gets a last-second save in "The Voice"

Stanwood singer Savanna Woods was nearly knocked out during the battle rounds of NBC's "The Voice."