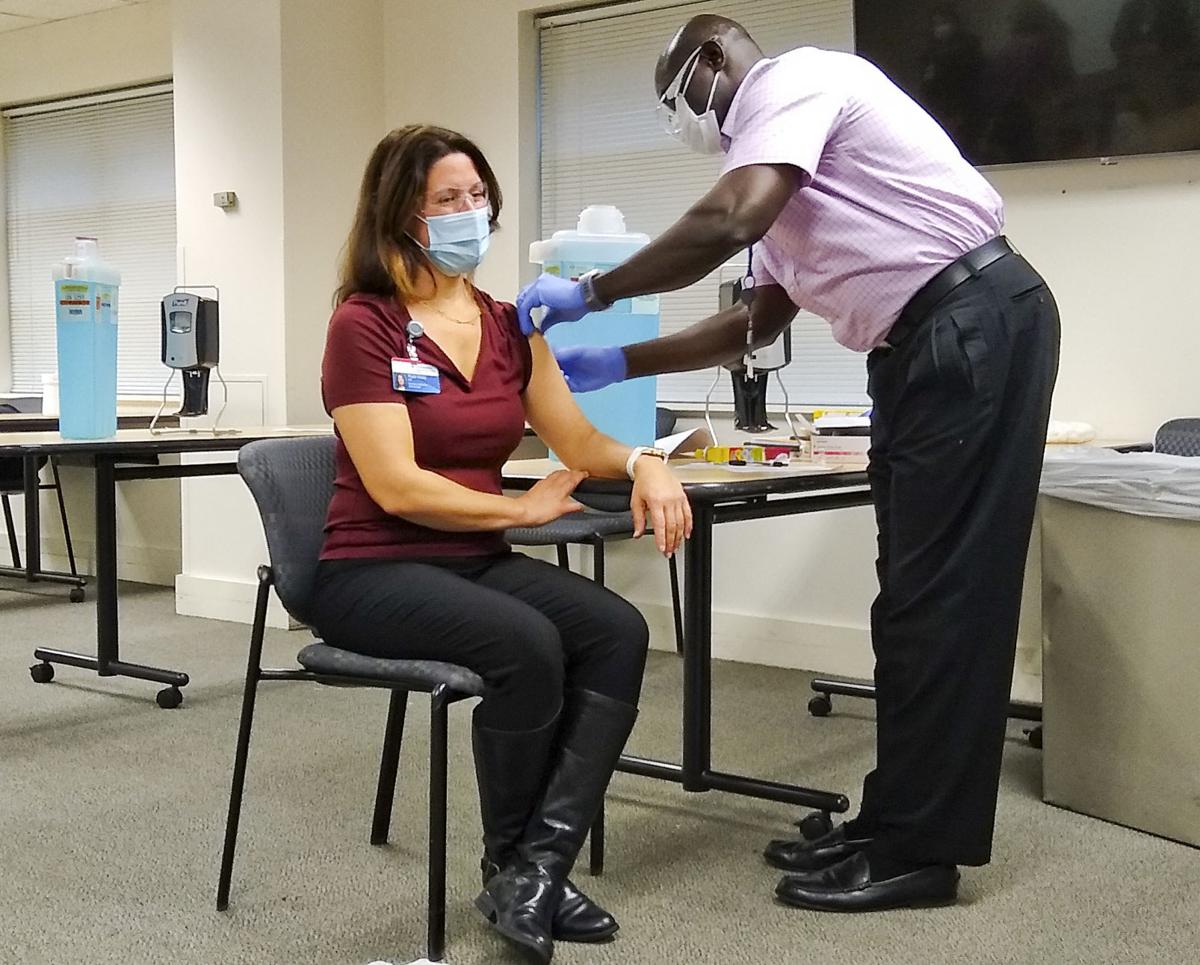 Dr. Ryan Keay, the medical director of the Emergency Department at  Providence Regional Medical Center in Everett, receives the COVID-19 vaccine on Thursday. 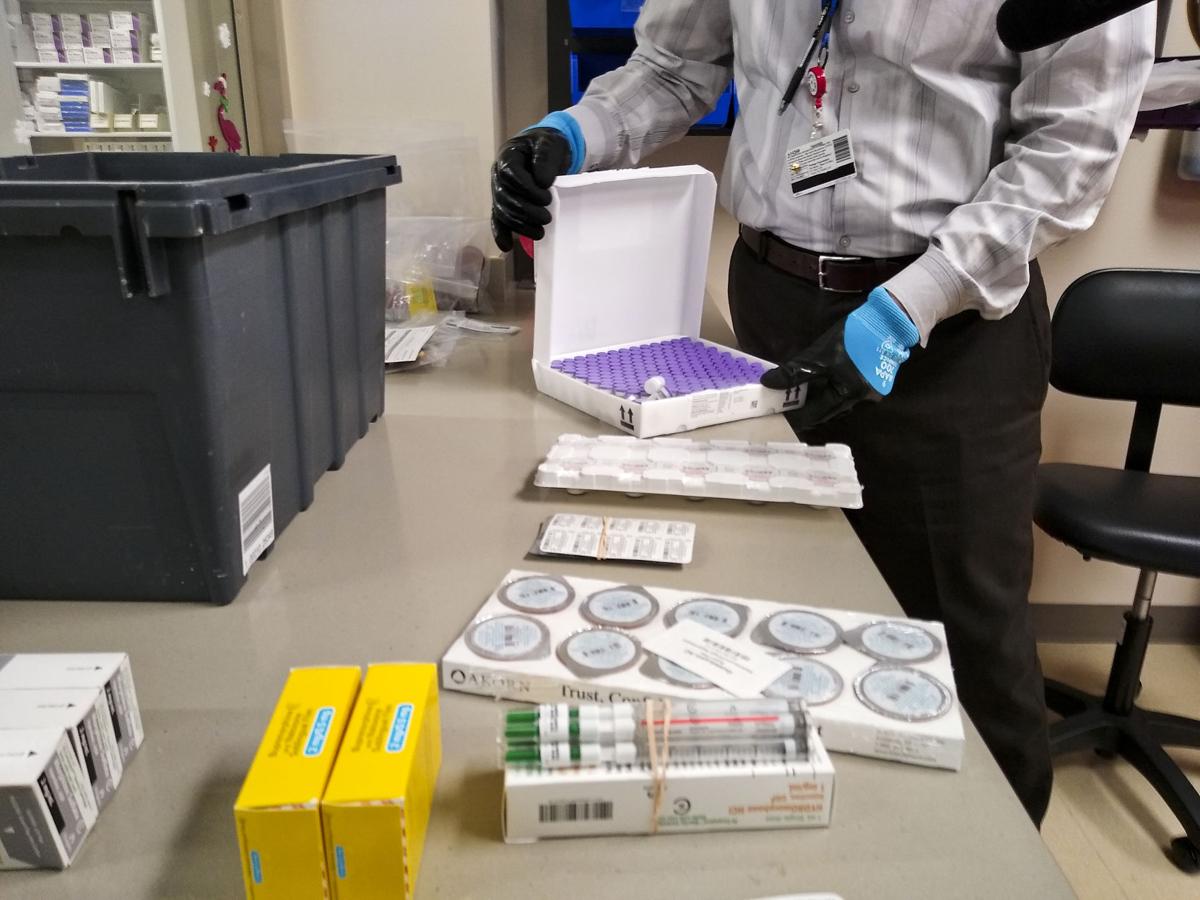 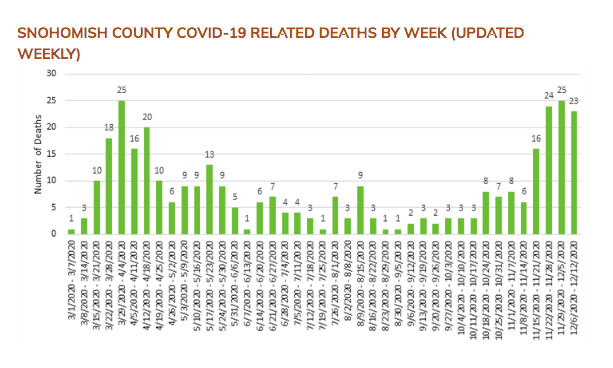 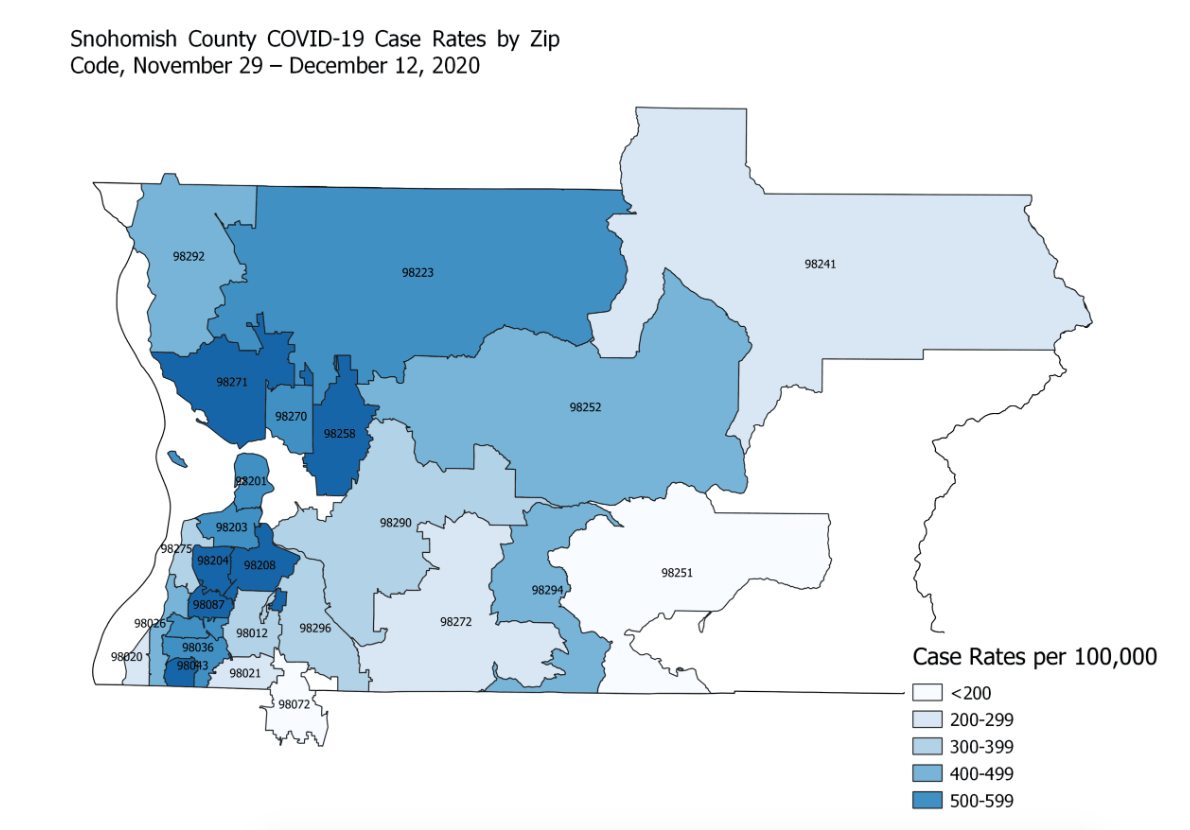 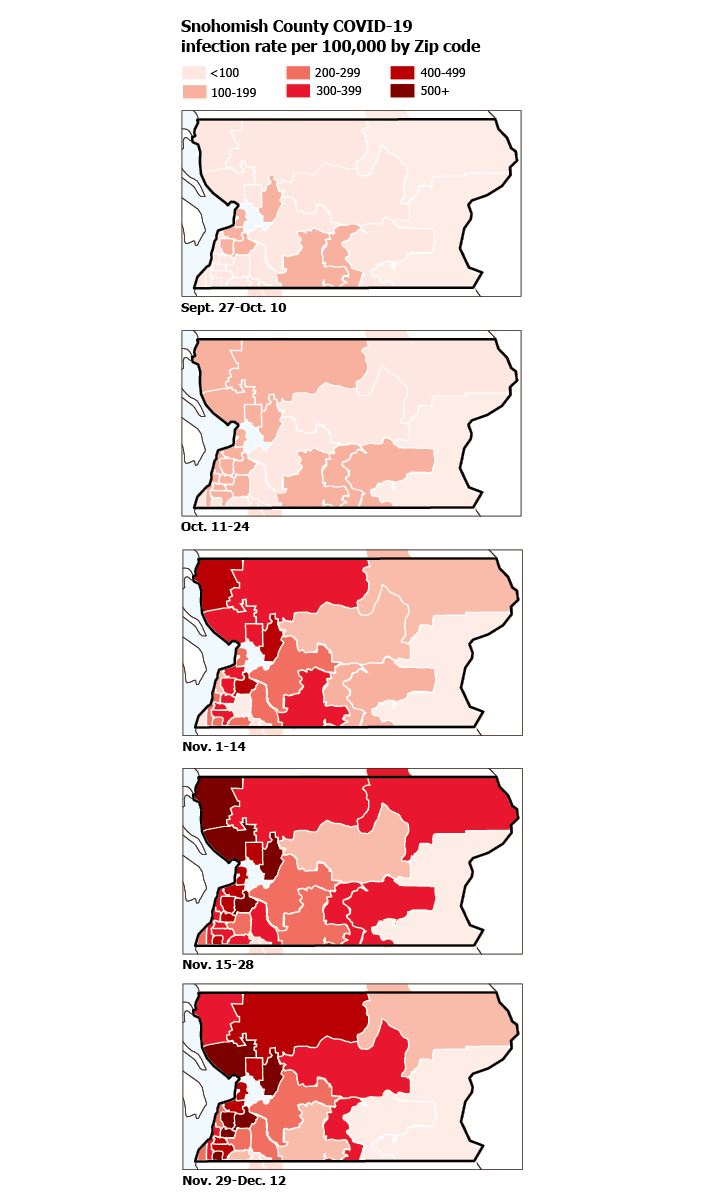 Dr. Ryan Keay, the medical director of the Emergency Department at  Providence Regional Medical Center in Everett, receives the COVID-19 vaccine on Thursday.

The COVID-19 infection rate dropped in the Stanwood area during the first two weeks of December — the first decline since summer.

However, the virus is still widespread throughout the region, and parts of Snohomish County are still seeing coronavirus infection rates increasing, according to data released Monday from the Snohomish Health District.

“Just about every indicator has tended to go in the wrong direction still,” Snohomish County health officer Dr. Chris Spitters said in a briefing last week.

The number of workplace outbreak investigations increased from 32 new outbreaks in the last week of November to 42 new outbreaks the first week of December, Spitters said. There are about 65 ongoing outbreaks in Snohomish County workplaces, and there are 56 active long-term care outbreaks with more than 500 cases in the past month.

Over the weekend, Snohomish County recorded 499 new COVID-19 cases. Stanwood recorded 131 new cases since Dec. 1. Camano had 62 infections from Dec. 1-18, according to the most recent Island County data.

As of Monday, there were 89 COVID-19 patients and 11 suspected virus-related patients in Snohomish County hospitals, including 14 on ventilators, according to county data.

However, the Stanwood Zip code had an infection rate of more than 500 cases per 100,000 people in late November. Now, the rate is between 300 and 399, the first decrease in the Zip code since the data was first released by the Health District in summer.

The ongoing COVID-19 outbreak at Josephine Caring Community in Stanwood appears to be slowing after claiming 21 lives and sickening at least 181 residents and staff.

This data is separate from an outbreak in the spring at Josephine where 34 people tested positive and six died.

The skilled nursing side of the facility had new positive tests last week, according to a statement posted on Josphine’s website Dec. 17.

The Suites assisted living and Josephine At Home have had four weeks of negative test results for all residents and staff.

The facility’s residents and staff have not received the vaccine, Josephine Caring Community CEO Terry Robertson confirmed in an email to the Stanwood Camano News.

“Looks like we will have to wait until mid-January to get our vaccinations,” he said.

Robertson said he is “really frustrated” because he already has family and friends around the country, mostly healthcare workers, who received their vaccination last week.

“I know nurses and doctors in the hospitals have already begun receiving the vaccine,” he said. “Don’t know what the hold up is here Washington state. This makes no sense to me while we wait as my family in three other states have already received their vaccinations.”

In last week’s briefing, Spitters spoke in general about the vaccine rollout, noting that the Health District and the healthcare system will look to “minimize as many hiccups as possible and make this process as smooth as possible, but it is complex, it’s new, and the vehicle is moving as we’re putting things together, so there certainly may be occasional logistical glitches or what have you, but we’ll take those in stride, learn from them and improve processes as we go forward.”

“This is good news for our community, our county and our entire country. We can now see the light at the end of these darkest days of the pandemic,” Snohomish County Executive Dave Somers said.

On Friday, doses were administered to Providence caregivers who are at the highest risk of contracting the virus, Health District officials said in a statement.

This shipment was the first of many expected in Snohomish County in the coming days and weeks. The state Department of Health has indicated that they expect additional doses of the Pfizer vaccine to be shipped by month's end. An additional 183,000 doses of the recently approved Moderna vaccine are also expected this month. Regular weekly shipments of both vaccines should begin in January.

“This is an incredible milestone, but we still have miles to go,” Spitters said. “Please keep up the mask-wearing, avoiding gatherings with non-household members, and staying at least 6 feet apart."

The first group in Snohomish County eligible for the vaccine — known as Phase 1a — includes 15,000-16,000 high-risk workers in health care settings, high-risk first responders, and employees at long-term care and similar adult care settings. In addition to those employees, there are approximately 10,000-12,000 residents living in the long-term or adult care facilities that are eligible to receive the vaccine.

The Health District has also launched a new website — snohd.org/covidvaccine — to provide vaccine information. The state has more information at covidvaccineWA.org.

In Island County, the first doses were administered Thursday at WhidbeyHealth in Coupeville.

Last week, the state Department of Health said federal officials trimmed Washington’s Pfizer vaccine allocation to 44,850 doses from the originally expected 74,100 doses. State officials said they were not given an explanation for the reduction.

“This reduction does not change our commitment to getting all allocated doses out to health care providers and people in Washington at risk of COVID-19,” Secretary of Health John Wiesman said in a statement Friday. “Our focus is on the vaccines we are receiving and making sure health care providers and long-term care facilities are ready to give those vaccines. We are thankful we still have doses to allocate, and look forward to understanding our allocations beyond next week.”