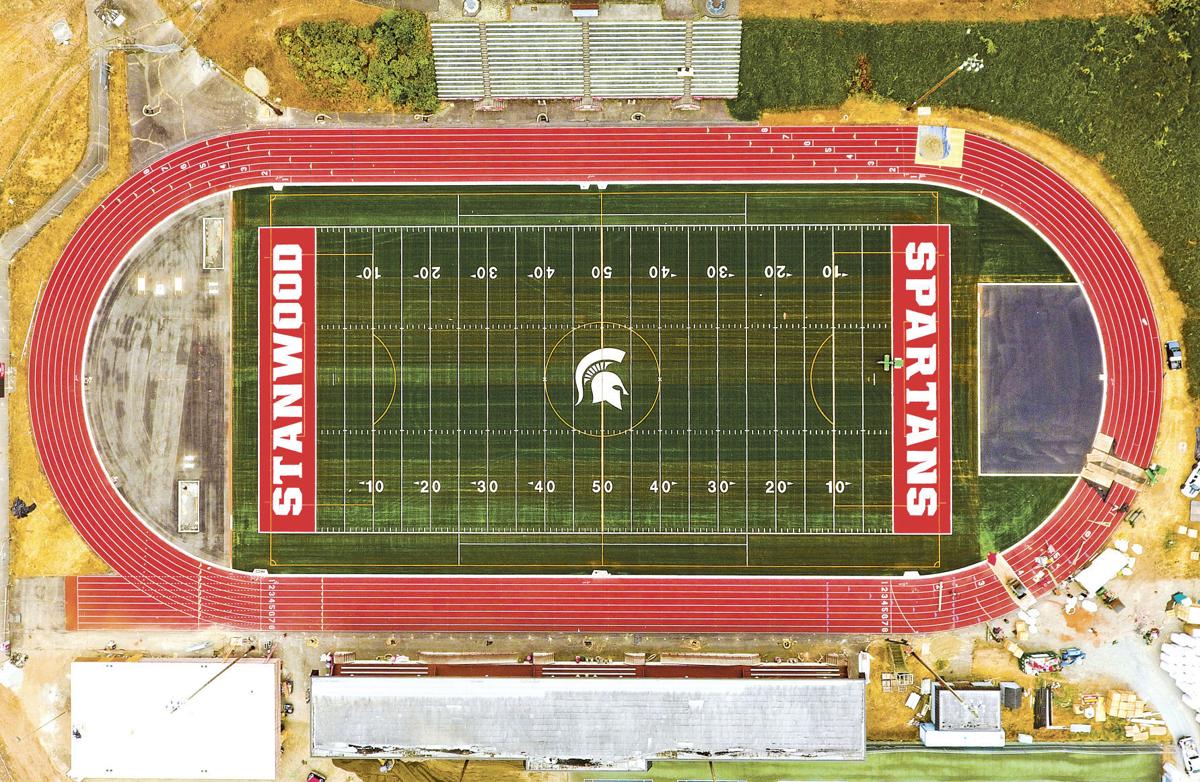 The new Stanwood stadium field is seen from a drone above. 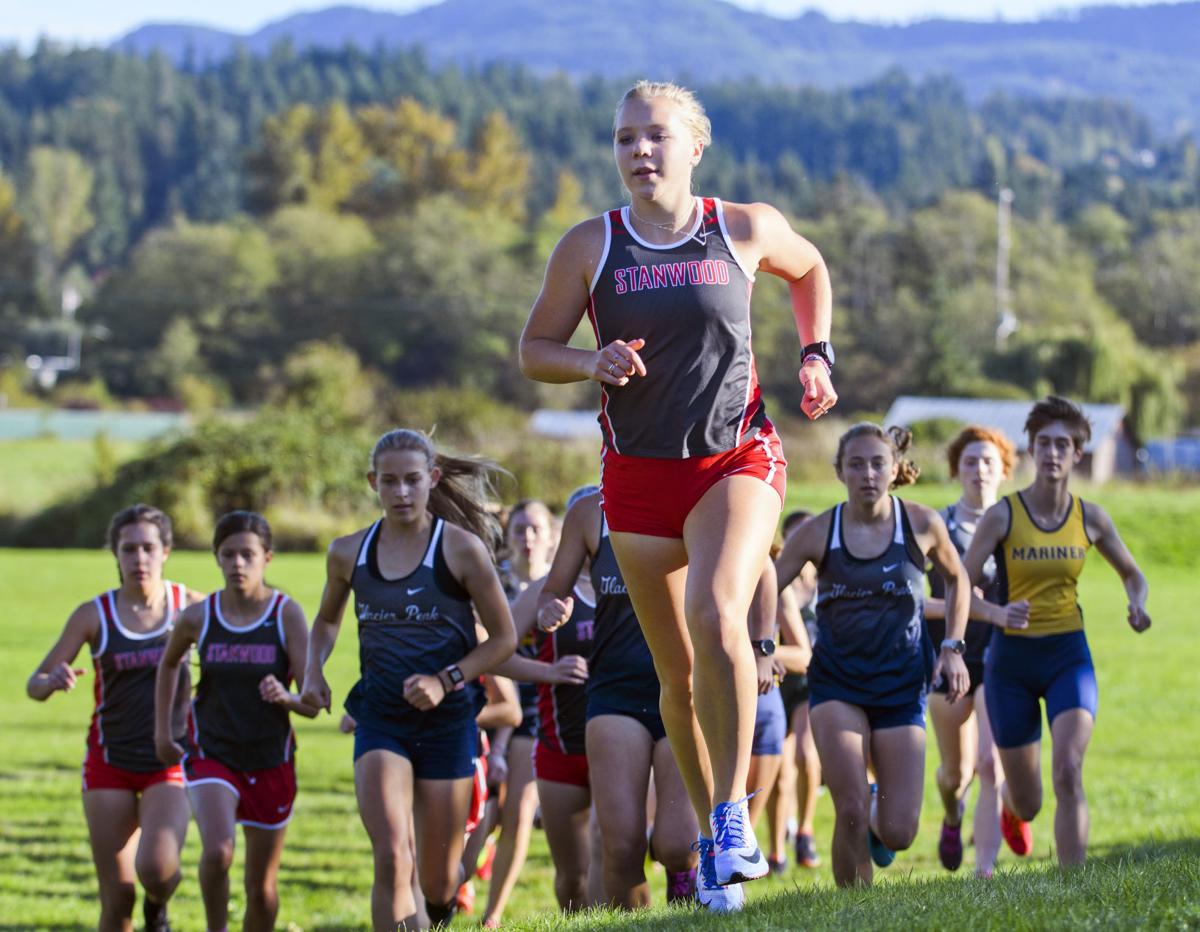 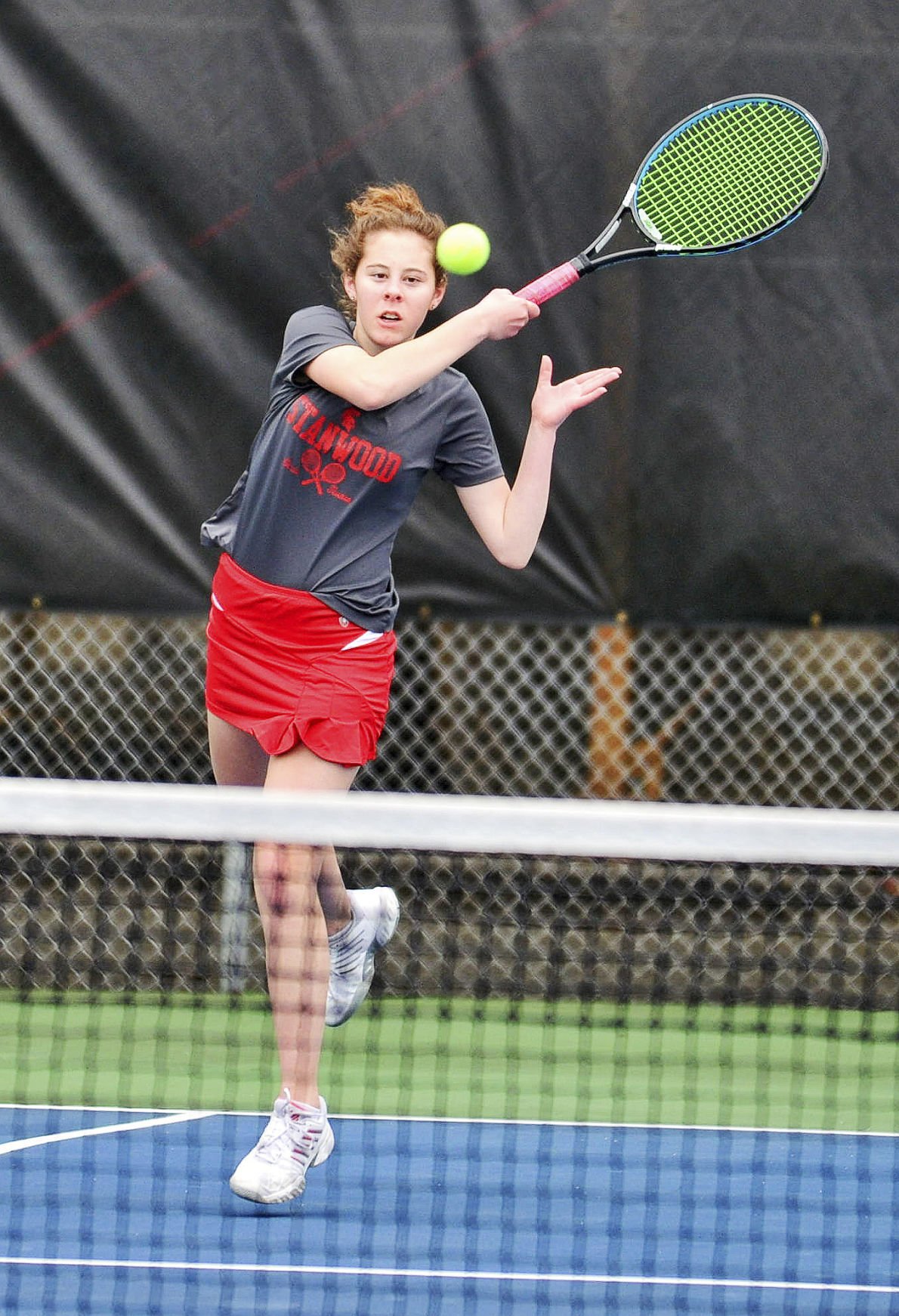 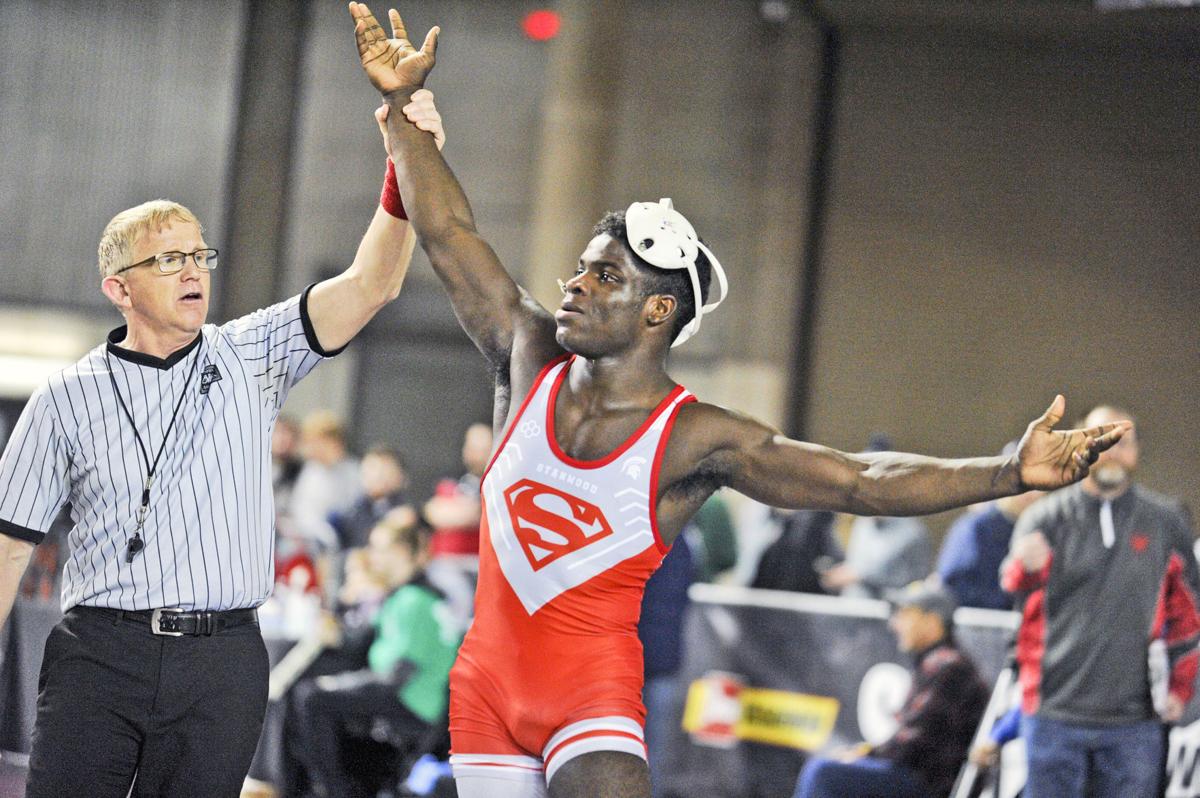 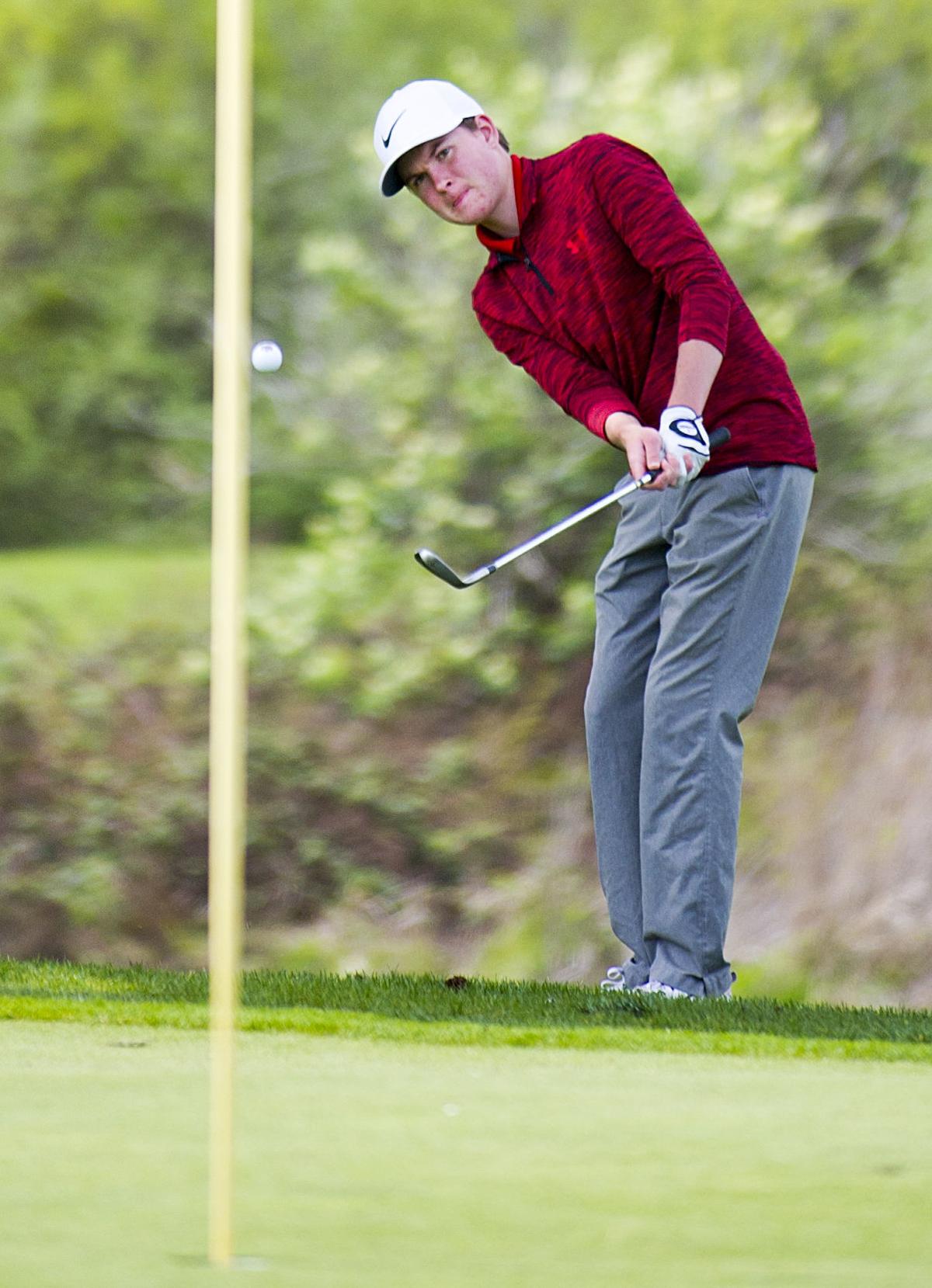 Cole Weiderstrom chips during the nine-hole match between Oak Harbor and Stanwood on Thursday, April 25, 2019, at Camaloch Golf Course. 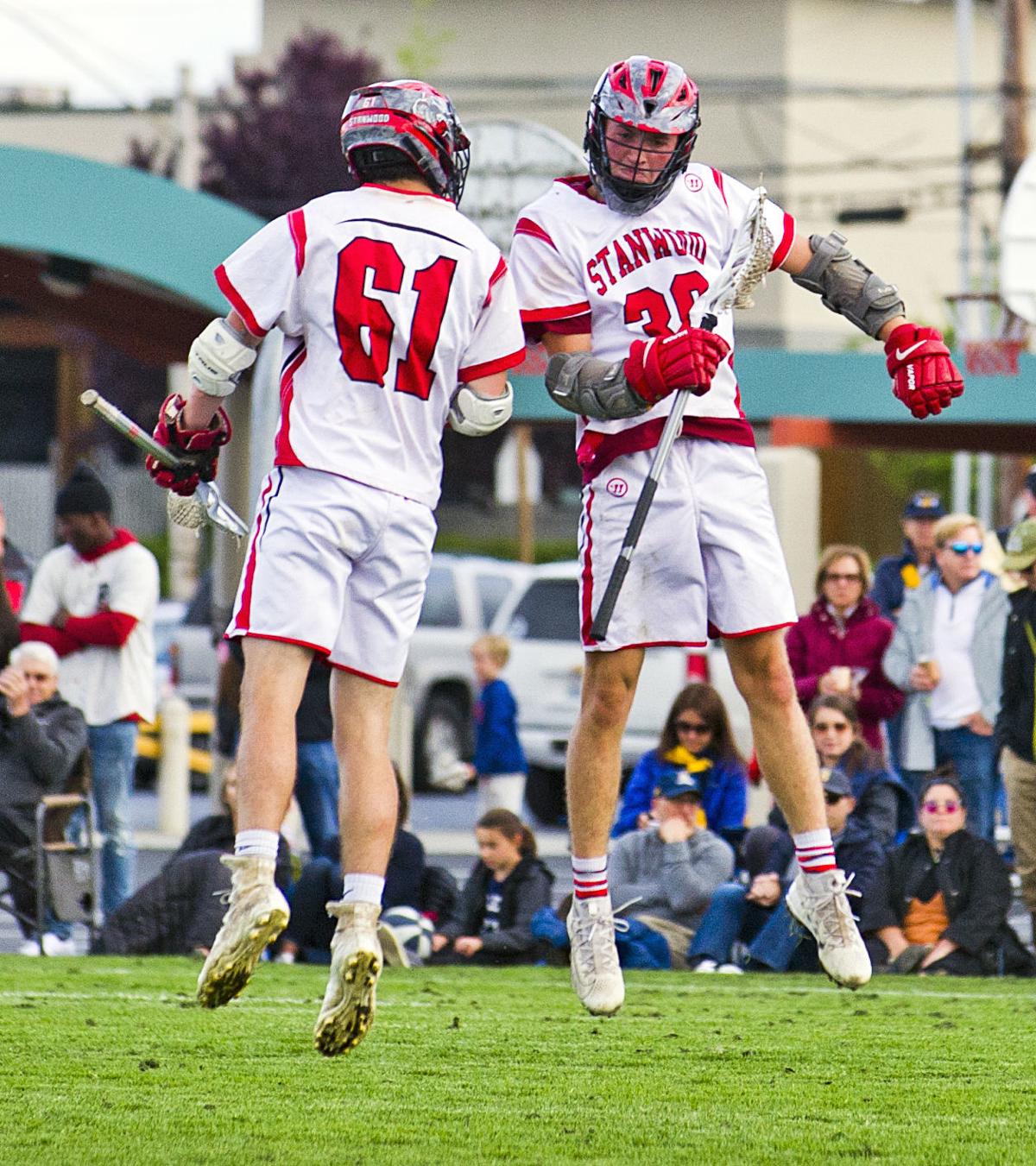 Taylor McCall (61) and Taylor Zemple celebrate McCall's goal during Stanwood's 12-6 loss in the state 3A quarterfinals on Friday, May 17, 2019, at Stanwood Middle School. 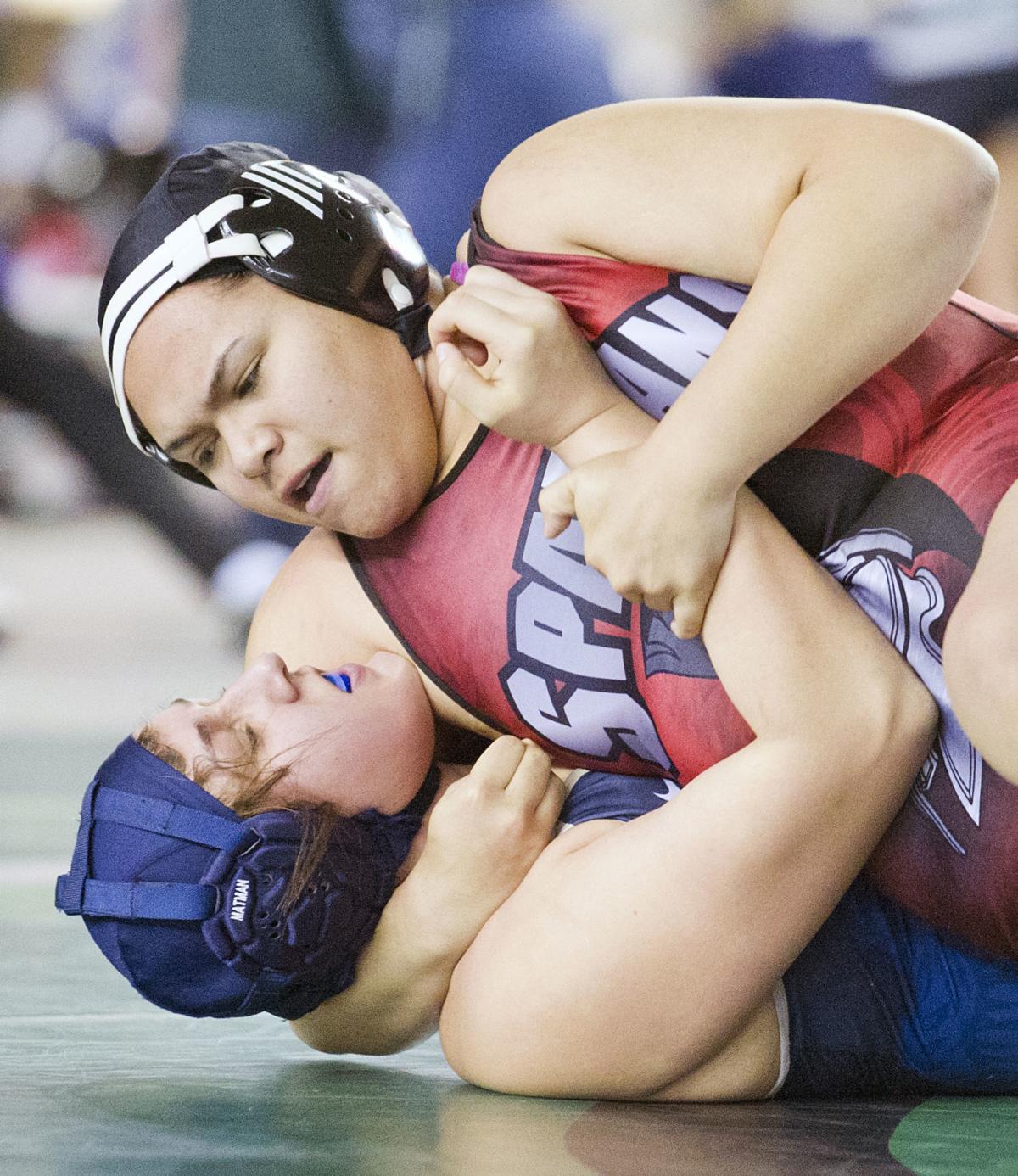 Chanel Siva wrestles during the state wrestling championships Friday and Saturday, Feb. 15-16, 2019, at the Tacoma Dome. 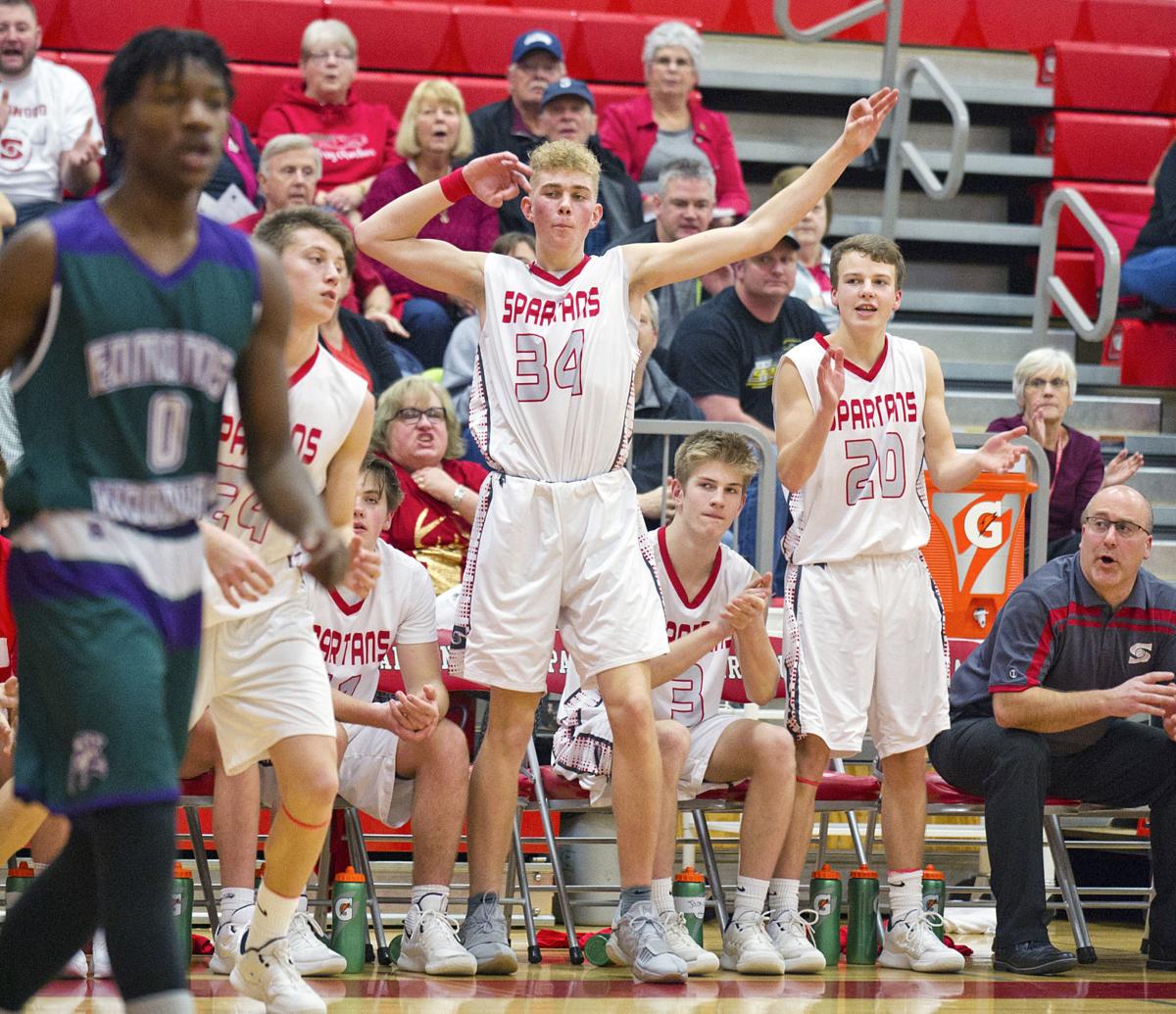 The Spartan bench cheers during Stanwood's 70-60 home victory over Edmonds-Woodway on Wednesday, Dec. 12, 2018. 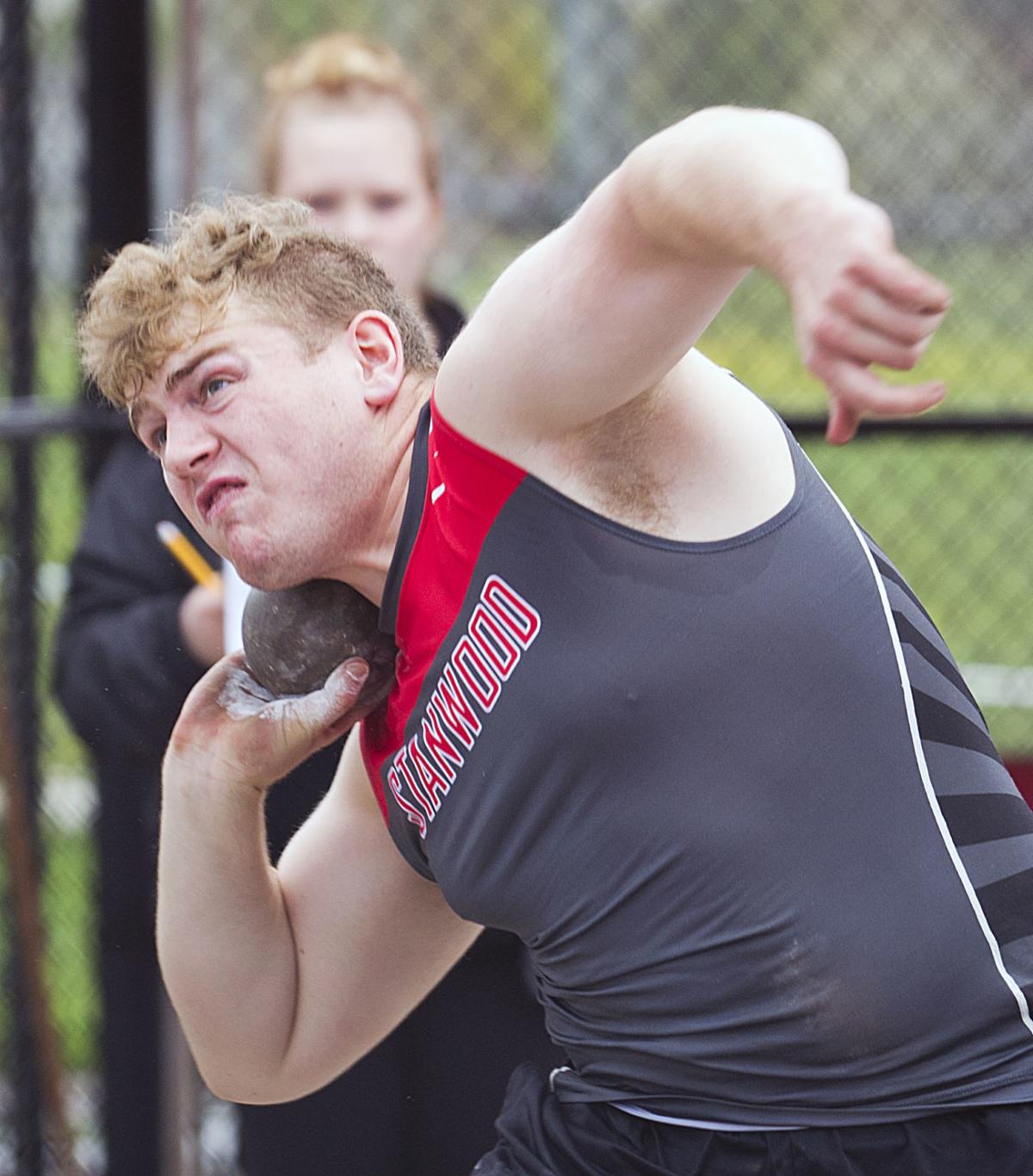 Wyatt Tayon launches the shot during the Spartans track and field meet Thursday, April 18, 2019, at Quil Ceda Stadium in Marysville. 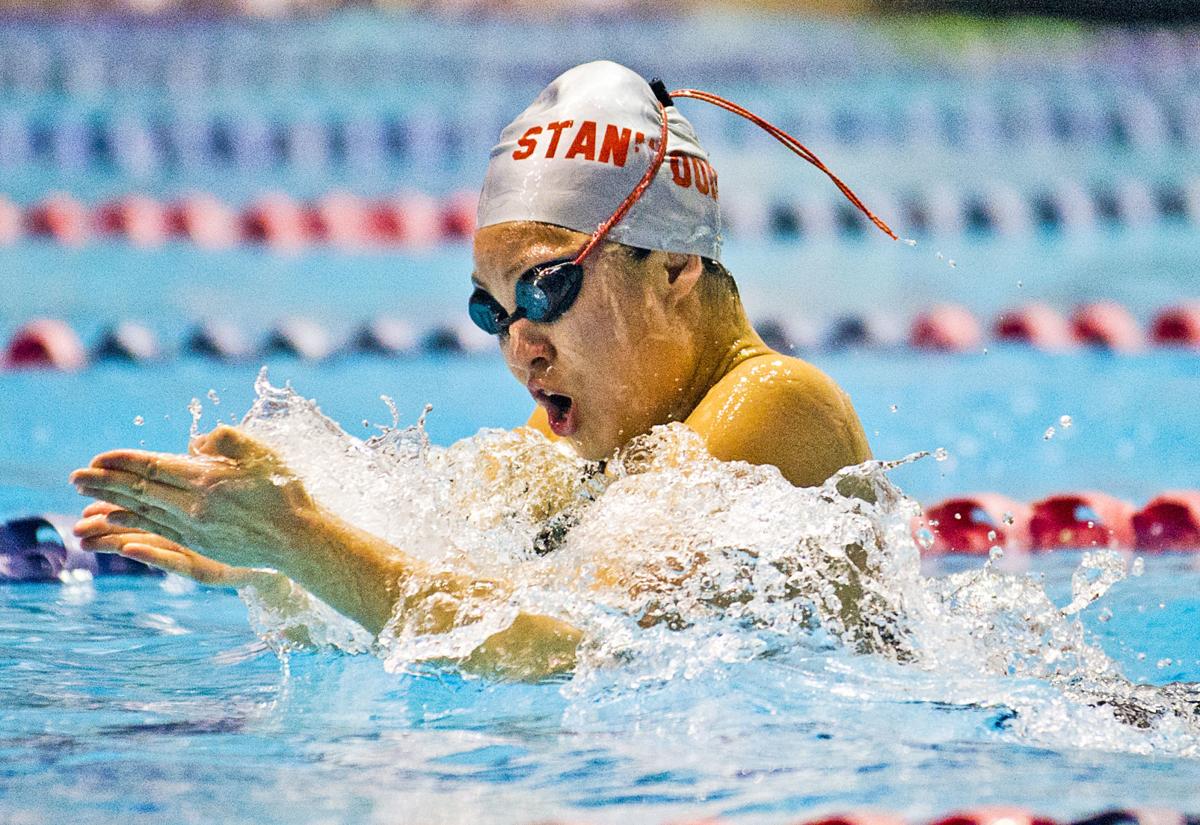 Jetlynn Hau swims the breaststroke during the 200 yard individual medley race during the 3A state girls swimming prelims Friday, Nov. 15, 2019, in Federal Way.

Another year, another crop of memorable Spartan sports moments where talented athletes posted record-breaking fetes, made their marks or cemented legacies.

Those of us lucky enough to witness some of the events firsthand know the memories will last a lifetime.  So here’s a look back, in no particular order, at the top 10 Spartan sports moments from 2019:

Stanwood junior Chanel Siva claimed the girls 235-pound title at Mat Classic XXXI in the Tacoma Dome after reeling off five wins over the two-day tournament.

The No. 3-ranked Siva bested her cousin, No. 4-ranked junior Goddess Ma’alona-Faletogo of Thomas Jefferson High in Auburn, to earn the crown.

Tied 2-2, Siva powered out of Ma’alona-Faletogo's grasp to earn a third-period escape to win 3-2, capturing Stanwood’s first girls state championship since Laura Charboneau won the 265-pound title in 2012. Siva also was the only girl or boy wrestler from Snohomish County to claim a title this year.

Siva’s goal now turns to title defense during her senior campaign, which started earlier this month.

After being declared champ, Siva collected an American Samoa flag and waved it around the mat.

“It’s part of my heritage that I haven’t really had a connection with, but I wanted to celebrate my Samoan side that, physically, helped me get here,” said Siva, who placed fifth at state a year prior.

Oher Spartans collected hardware at the super-sized Mat Classic — twice the normal size because snow storms forced the cancellation of regional rounds across the state a week before.

Sophomore Autumn Ortega claimed fourth in the 155-pound bracket, finishing the season 32-6. “I’m happy because last year I went 0-2 and spent the rest of the tournament wandering the stands,” she said. “I didn’t want to do that again.”

In the end, the girls team finished tied for seventh out of 144 schools.

Three of the seven Stanwood boys at the state championships placed, including a pair of third-place finishes by junior Riley Van Scoy and sophomore Isaac Ortega.

“Winning third felt good,” Ortega said. “I felt like I had something to prove.”

Senior Jeremy Williams fought through a long and winding path through this oversized Mat Classic to claim his seventh-place trophy in the 152-pound bracket, besting five opponents after opening the tourney with a 11-5 loss.

For the seventh year in a row, the Spartan boys basketball team elbowed their way to the regional round of the state tournament.

Stanwood punched their ticket to state with a nail-biting 59-58 win over Shorewood where the Spartans saw a 10-point lead evaporate. Tied with 10 second left, Cort Roberson hit a free throw to give Stanwood a one-point lead and Jake Cleary deflected the ball on the Thunderbirds’ ensuing possession to seal the win.

In the regional round, Stanwood fell to eventual state champion O’Dea 78-55, but fought hard until the bitter end.

“I didn’t want to leave thinking there was something we could have done,” head coach Zach Ward said. “And I have zero regrets. The loss takes nothing away from what we did all year. Getting 15 wins is an amazing feat.”

One of the major storylines of the past year has been the impact of campus construction.

Work started in March, sending the boys soccer team — which was 2-1-1 at home, including earning a win on the grass field’s last event — on the road for the remainder of the season.

The track and field team also hit the road for practices and meets for the entirety of the season.

The boys tennis team made do with fewer courts and a wet, gravel pit that spent the season swallowing errant balls.

The disruptions are about to pay off.

The new additions at the stadium — fieldhouse, artificial turf field and resurfaced track — are complete. New, brighter lights are being installed soon. Two new tennis courts will be ready by the spring season, school officials said.

Next, the baseball and softball fields will ditch the grass for artificial turf — and lights.

After the new school opens in January 2021, crews will tear down the old school buildings to make way for an artificial turf practice field.

The Stanwood swimmer just gets faster and faster. Jetlynn Hau won her second consecutive state title in the 100-yard breaststroke, capping her prep career with a personal-best time of 1 minute, 2.04 seconds at the 3A state championships Saturday in Federal Way. That time was the third-fastest time in 3A state meet history, and an All-American automatic qualifying time. That means she’s in the top 100 in the nation for that event, the first Spartan girl to earn the honor.

“When I first started swimming, breaststroke was my favorite. I thought it was the easiest,” she said. “I think my body is made for breaststroke.”

It was her fourth time standing on the state podium. She collected third-place state medals in the breaststroke as a freshman and sophomore before taking back-to-back crowns — the first individual girls swimming state titles in program history.

Hau also took fourth place in the 200 individual medley with a personal-best time of 2:08.66, edging fifth place by four-hundredths of a second. She claimed a pair of seventh-place finishes in the event each of the last two seasons.

Cole Weiderstrom ended a stellar high school career with a 33rd place finish out of 114 golfers at state — his third year in a row making the 3A championships.

Shelby Lund also advanced to the state tournament, shooting a 106 in the first round at Hawks Prairie Golf Course in Lacey, but missing the cut and ending a solid season. Lund, a junior who has qualified for the state 3A championships three years running, advanced after a third-place finish at the district championship.

Zill mows through regular season and into state tourney

Avery Zill went 1-2 at the state 3A tennis tournament in May, ending another outstanding season by the sophomore.

Zill, now a junior, looks to build on a 28-1 career regular-season varsity record when the season resumes this spring.

Zill and the doubles team of senior Shawna Lingrey and junior Lily Cunningham landed on the all-Wesco first team. Coach of the Year honors went to Stanwood’s Cunningham.

The Spartans clinched the league title with a hard-won battle over rival Snohomish in early May. The victory earned Stanwood a bye into the 3A playoff quarterfinals.

The Spartans finished the regular season 10-4 having outscored opponents 133-98.

But in the postseason, Stanwood was matched up against three-time defending state champion Bellevue. The patient, disciplined Spartans went toe-to-toe with the Wolverines until the final quarter when Bellevue simply didn’t let Stanwood have the ball. The Spartans fell at home 12-6, ending another impressive season. The loss comes a year after the Spartans advanced to the program’s first-ever semifinal — a 14-2 loss to Bellevue.

“It’s all about when you peak as a team,” head coach Garry Hartzell said after the game. “And, without a doubt, we peaked today. We just came up a bit short against a great team.”

Six Stanwood athletes placed at the 3A state track and field championships in May.

Senior Wyatt Tayon claimed fourth place in the shot put with a personal record heave of 50 feet, 10.25 inches. He also finished 12th in the discus with a throw of 137 feet.

Junior Anna Schander secured a fifth-place finish with a 127-foot, 3-inch fling of the discus.

Three Spartans finished strong at the state 3A cross country championships in November in Pasco.

“Jason had his best race of the season and second best time of his career,” head coach Jordan Sneva said. “Charlotte ran well, wrapping up a solid cross county career, and Aubree Carr … is excited to come back and lower her time.”