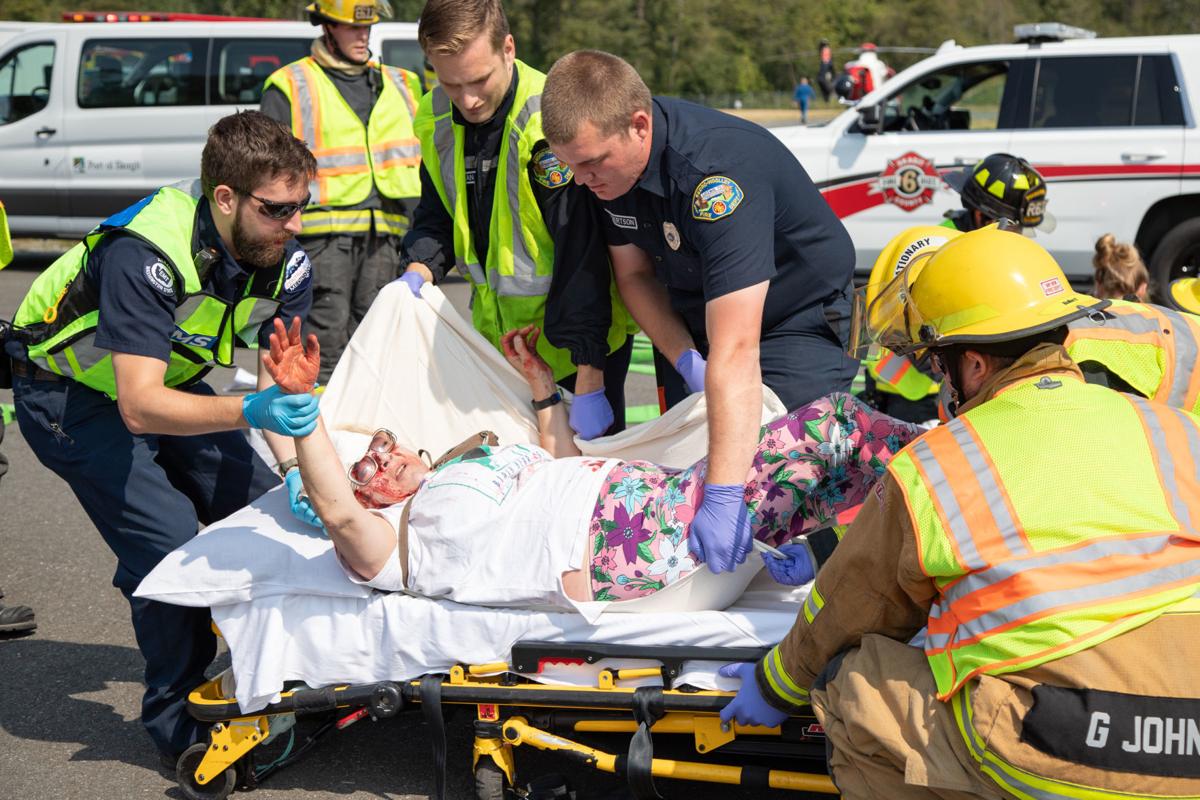 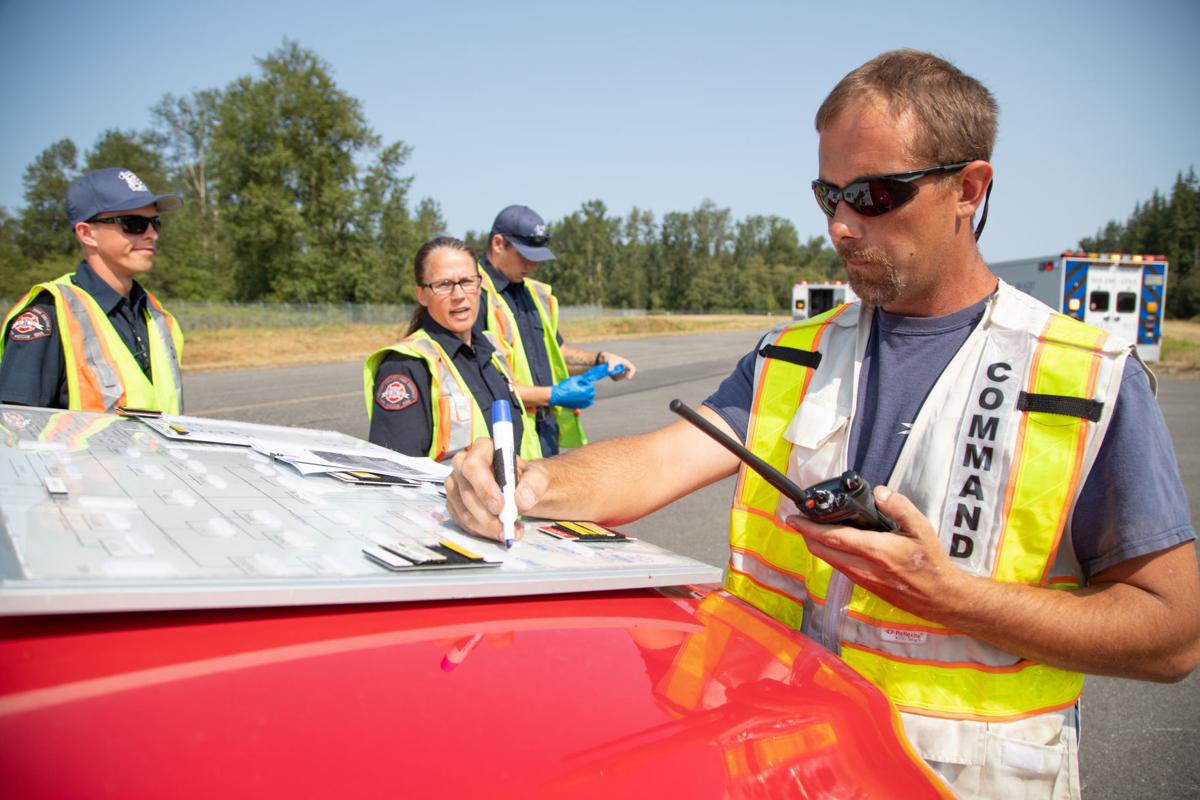 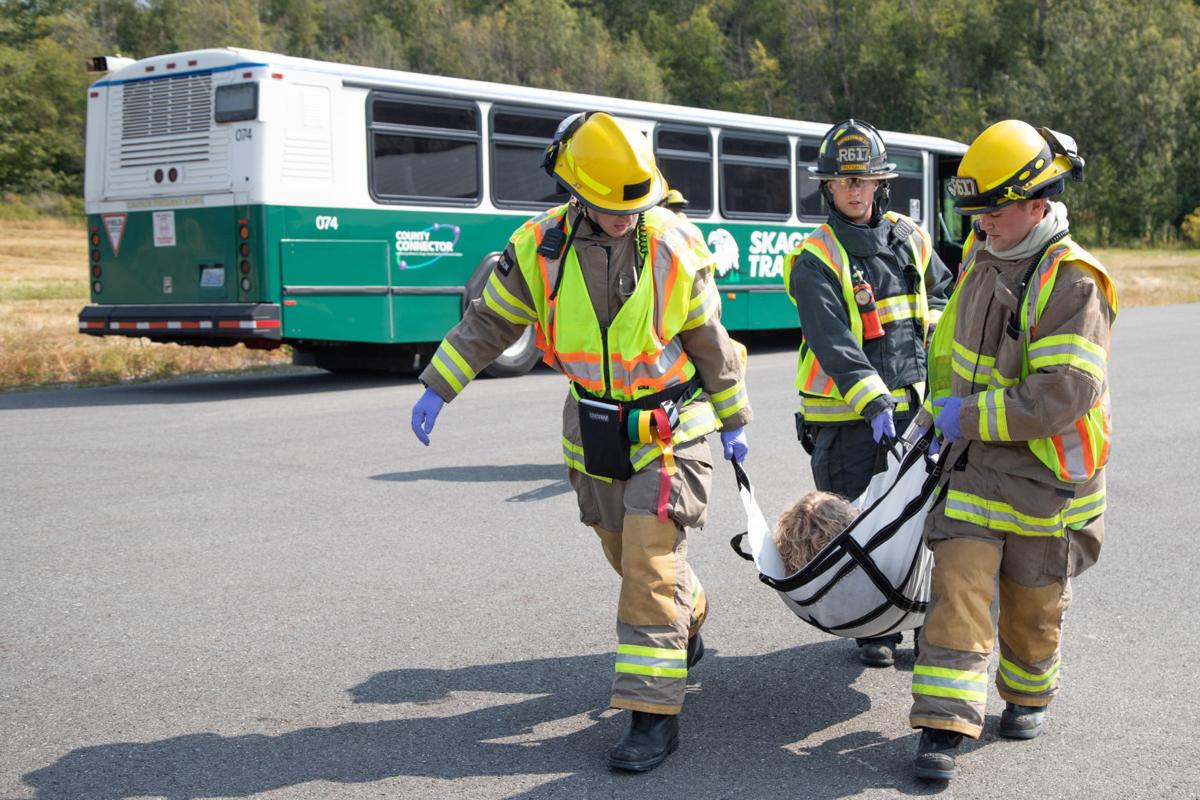 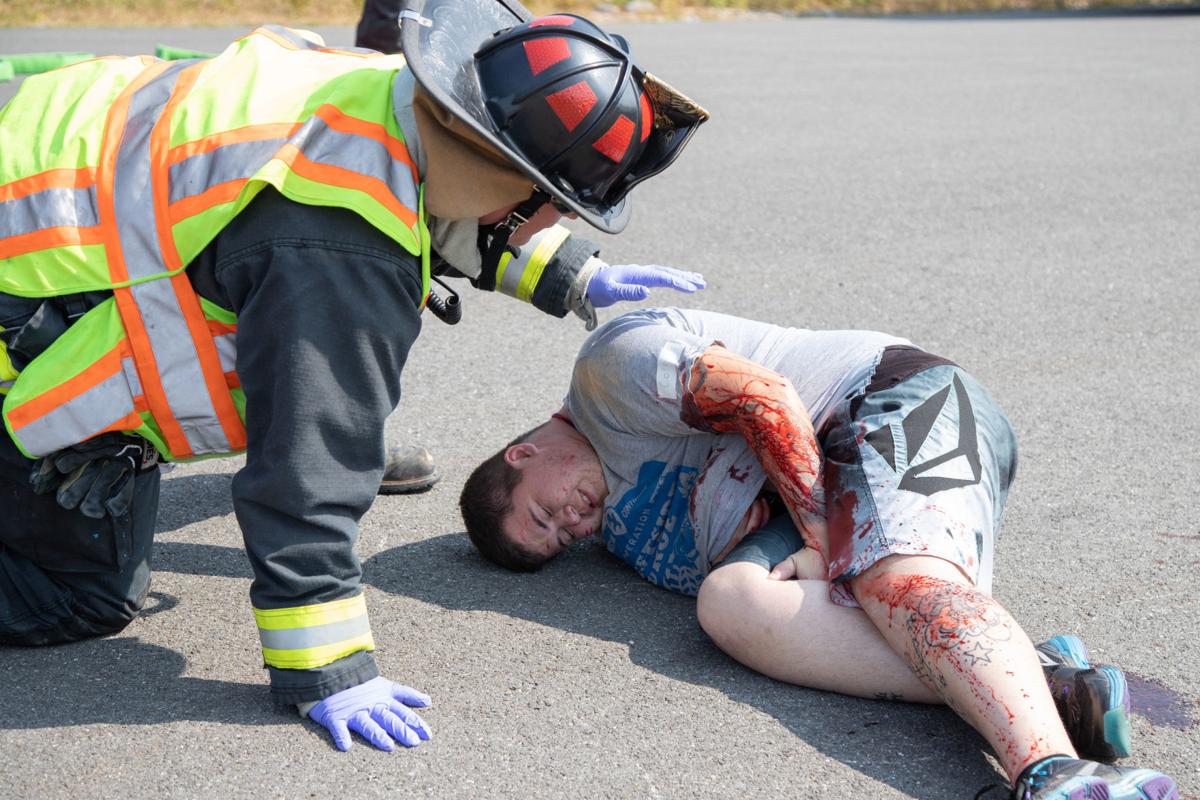 A firefighter checks on Cole Sherman as he cries for help and for his wife after sustaining a fake arm and stomach wound during a mass casualties incident drill Saturday at Skagit Regional Airport. 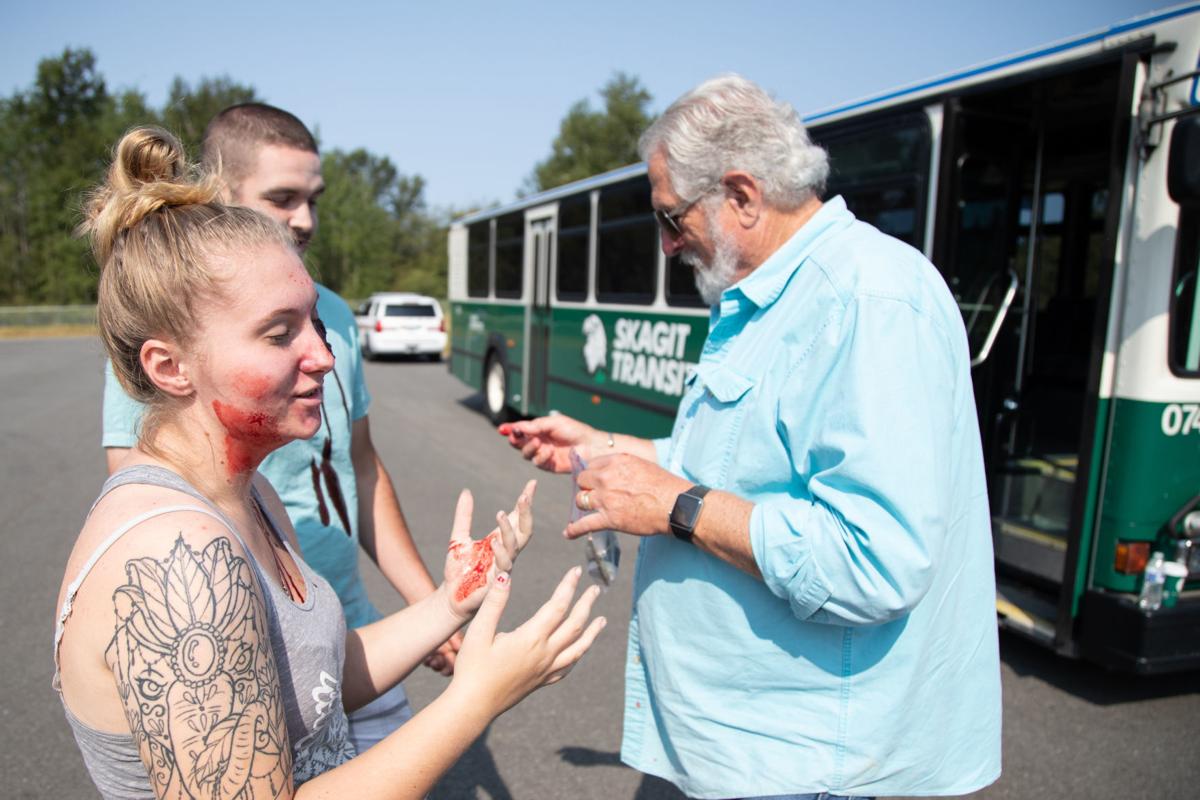 A firefighter checks on Cole Sherman as he cries for help and for his wife after sustaining a fake arm and stomach wound during a mass casualties incident drill Saturday at Skagit Regional Airport.

BURLINGTON — The scene at Skagit Regional Airport on Saturday looked almost like something out of a movie set. The only thing missing was the camera crew.

Tents, foldable chairs and a small trailer lined the side of a small landing strip. Makeup artists put the finishing touches of bloody gashes and cuts on their actors, who would play the part of airplane crash victims.

Peggy Grandke, one of the actors, had a head wound fashioned to look like a portion of her brain was exposed.

Skagit County fire districts 2, 5 and 6 were in attendance, as well as Skagit Medic One and local hospital districts.

A group of 50 emergency responders gathered in a hangar to discuss the drill briefing.

“This whole facility becomes yours,” Fire District 6 Chief Paul Wagner said. “You come use this hangar, if you need.”

Patsy Martin, executive director at the Port of Skagit, said communication efforts between departments during past incidents at the airport haven’t always been the best.

She said she hopes drills like these will change that.

“We want to be prepared if anything happens ... we want to make sure that they’re more seamless this time,” Martin said.

Minutes before the start of the drill, Jim Prosser, an associate with Moulage Mayhem, positioned actors on a bus.

“Just let it rip,” Prosser said. “Everyone else, scream and yell.”

Everyone was in place by 10:30 a.m. Emergency responders were prepped, the scene of the accident (between a plane and a school bus) was ready.

Nearby Fire District 6 was the first to respond by dispatch. Members were on the scene in less than a minute.

Actors began screaming for help, their red hands grasping out the windows of the bus.

Cole Sherman, an actor from Snohomish, was the first one off the bus, with an abdominal wound. He collapsed 20 feet from the bus, letting fake blood splatter on the asphalt.

Fire District 14 and Skagit EMS personnel were on the scene shortly thereafter. They began dropping green, red and yellow tarps — each representing a different severity of civilian injury.

“Do you remember your name?” a firefighter asked Sherman.

“Alright. Stay still. Do you remember what happened?” the firefighter asked.

Sherman began screaming for his wife, another actor on the bus.

As an airlift helicopter landed on the runway, EMS personnel began treating injuries and transporting actors out of the area.

Firefighters checked the airplane and bus for leaks or damage, typical protocol for these instances.

Within the hour, the scene was cleared and patients were out of the crash site.

This was Trent Green’s first time doing an MCI drill. Green, a District 6 firefighter, was wearing about 40 pounds of fire gear in Saturday’s 80 degree weather.

“I think the different entities worked very well with each other,” Green said.

Andrew Entrikin, Port of Skagit’s community outreach administrator, said the drill was a great way to assess the Port’s MCI and communication plan.

“The whole goal here is to look at where we can improve ... This training is really good because we don’t always think about our communication plan,” Entrikin said.