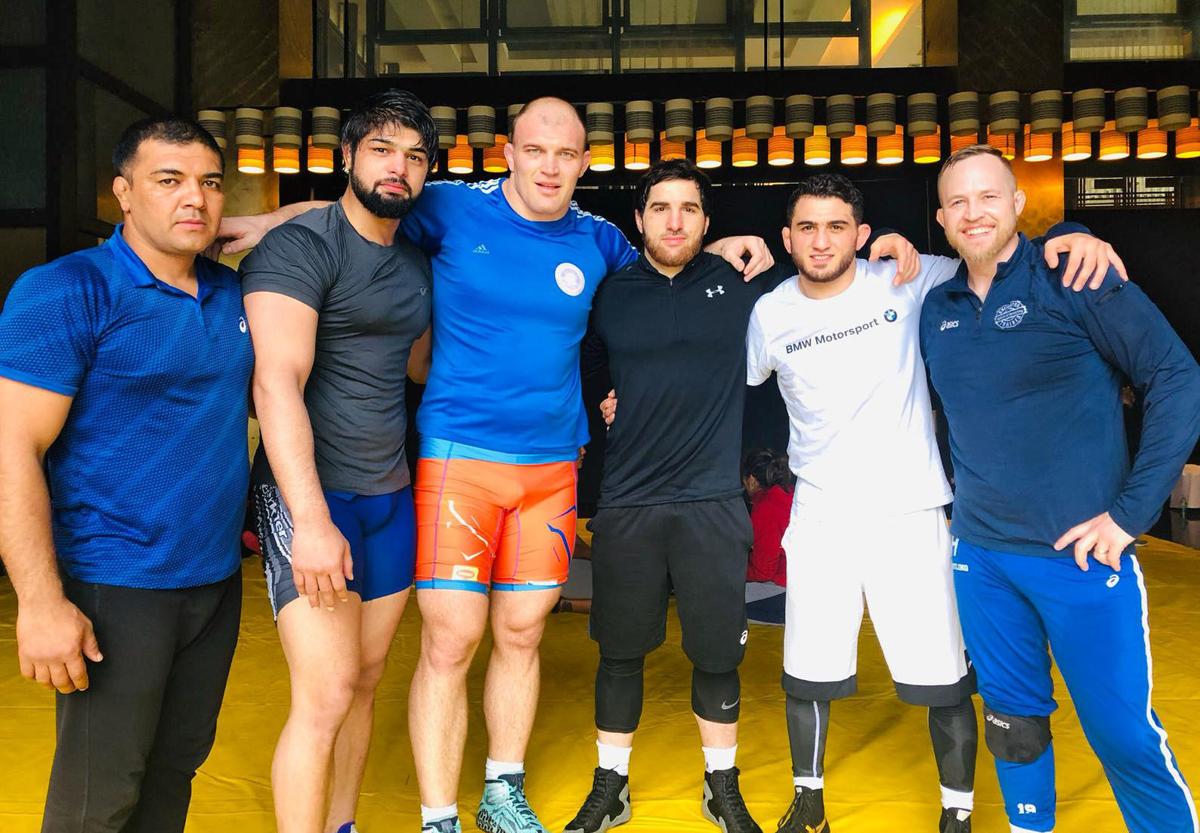 Burlington-Edison graduate Andy Cook, right, is pictured with fellow coaches of the Haryana Hammers, a wrestling team in India. 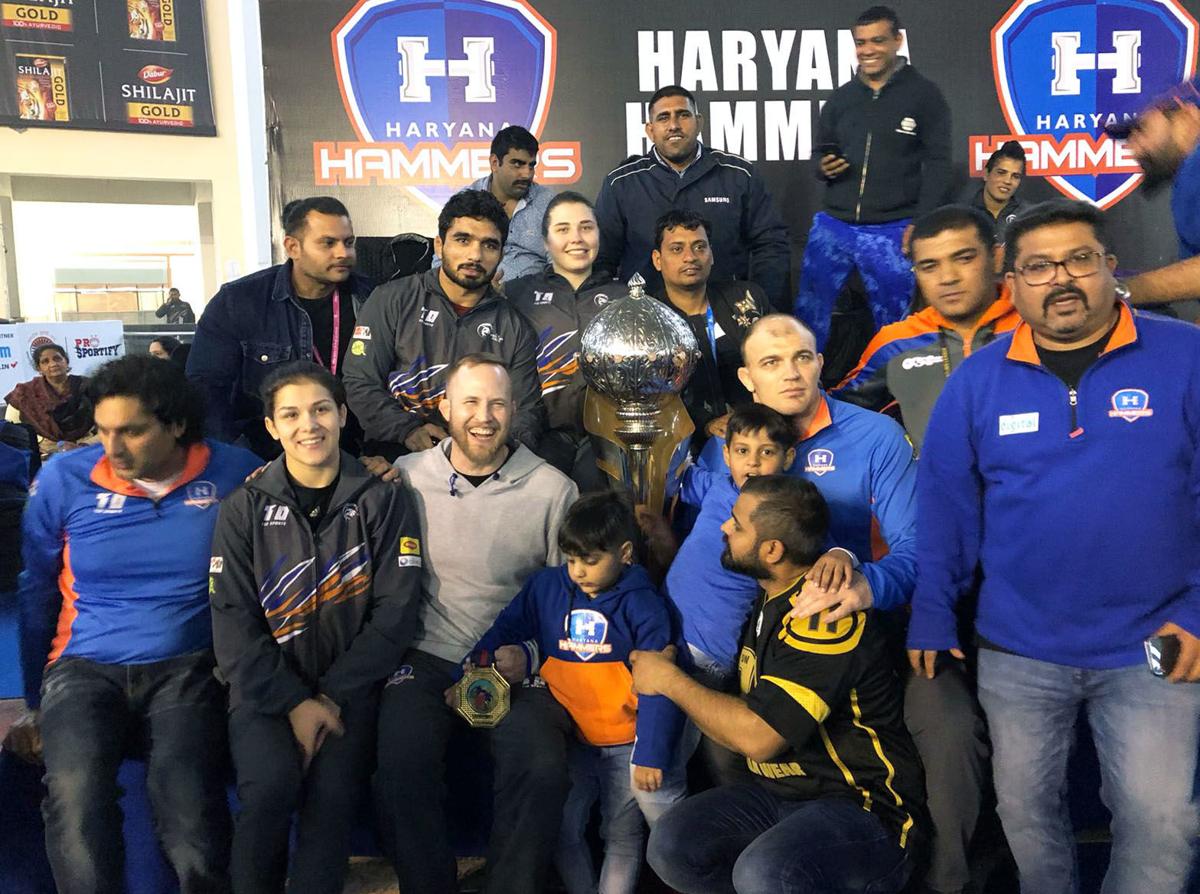 Burlington-Edison graduate Andy Cook, center left, is pictured with the wrestling team he helped coach in India, the Haryana Hammers.

Burlington-Edison graduate Andy Cook, right, is pictured with fellow coaches of the Haryana Hammers, a wrestling team in India.

Burlington-Edison graduate Andy Cook, center left, is pictured with the wrestling team he helped coach in India, the Haryana Hammers.

As a young wrestler taking to the mats in Burlington, Andy Cook dreamed of someday going to the Olympics.

It may have taken him longer than he wanted, but the 41-year-old Burlington-Edison graduate is a step closer to realizing that dream.

Cook is working for the Wrestling Federation of India to prepare women wrestlers for the Olympics.

“All in all, my goals have been set for the 2020 Games and producing medalists for the last six years,” Cook said by email of coaching athletes in the United States before taking the job in India. “And now I’m actually living it. Maybe not as I fully expected, but I feel even more honored to be here, where I know I will make a huge impact with proper appreciation.”

Though he just recently began his new job, Cook arrived in India early to begin working with wrestlers and scouting the talent.

He worked with an Indian Pro League Team, the Haryana Hammers, as a guest coach.

“It’s a two-week pro league with top athletes from all over the world,” Cook said. “It’s a very special opportunity for me as well.

“This is a perfect way to start our relationship as I will see all the top women in the league matches and have already met many of them.”

Living in India has taken some getting used to for Cook — from the toilets to sleeping on a thin pad placed on a wooden frame on the floor.

The bed has actually proved beneficial.

“At home, I was having back issues when I slept,” Cook said. “Now I’m feeling way better. It has to be the hard bed that’s helping.”

He said the respect displayed for coaches in India is unlike anything he has ever seen. Athletes carry his bag and get him what he needs or will need.

He said when he walks into a wrestling academy, the whole room stops as the athletes come to greet him with bows before returning to their workouts.

“I feel bad, but they’re like, ‘no problem,’” Cook said. “It’s an honor for them. This custom of respect is one I wish was alive in the USA. It is amazing and humbling.”

Cook began his coaching career at USA Everett, coaching there from 1999 to 2004. While there, he was the coach at Monroe High School.

From 2004 to 2008 he coached at Graham Kapowsin High School before taking a break to move to California to surf and live on the beach.

After returning to Washington, he started and spearheaded Vandit Wrestling Academy in Mount Vernon from 2010 through 2016 while coaching at Anacortes High School

He was coach at Mount Vernon High School for a season before being hired as the women’s coach at Grays Harbor College — a position he held from 2016 to 2018.

In 2014 he coached the USA Senior World Team in Tashkent, Uzbekistan, and in 2016 the Junior Pan American Team in Lima, Peru and the Cadet World Team in Athens, Greece.

In 2018, Cook was selected for the U23 World Team competing in Bucharest, Romania, but declined in order to coach in India.

Cook found out about the opportunity in India through a friend.

The friend was wearing a women’s college wrestling shirt at a camp when he was approached about the job by a coach from India.

While Cook’s friend scoffed at the idea of relocating and coaching in India, when he told Cook about the opportunity Cook was intrigued.

“I got all the info and started communicating with them last April,” he said. “By July, I was feeling like I may be the selection and in September, they finally appointed me the Foreign Expert for Freestyle Wrestling.”

As far as India’s Olympic chances, Cook has high expectations.

“As of the team, we are very solid and deep,” he said. “I believe we will be a top-five team by the Olympics and if we can produce the way we are capable, we could easily be top three.

“I always set the highest goals possible and that says six medals in Tokyo as team champions.”

Like the expectations he sets for his wrestlers, Cook’s personal goals are high as well.

“It wasn’t until 2014 that I realized it was actually possible to be one of the world’s best coaches, so I made a mindset shift and decided I was going to become the most highly regarded coach in the world with many world and Olympic medalists under my watch,” he said.

And his experience so far coaching abroad has led him to believe that he would like to do more of it.

“After 2020 I haven’t fully decided in detail what I want to do, but my feeling is I will stay abroad, working with a combination of the world’s best men and women for many years to come,” he said.