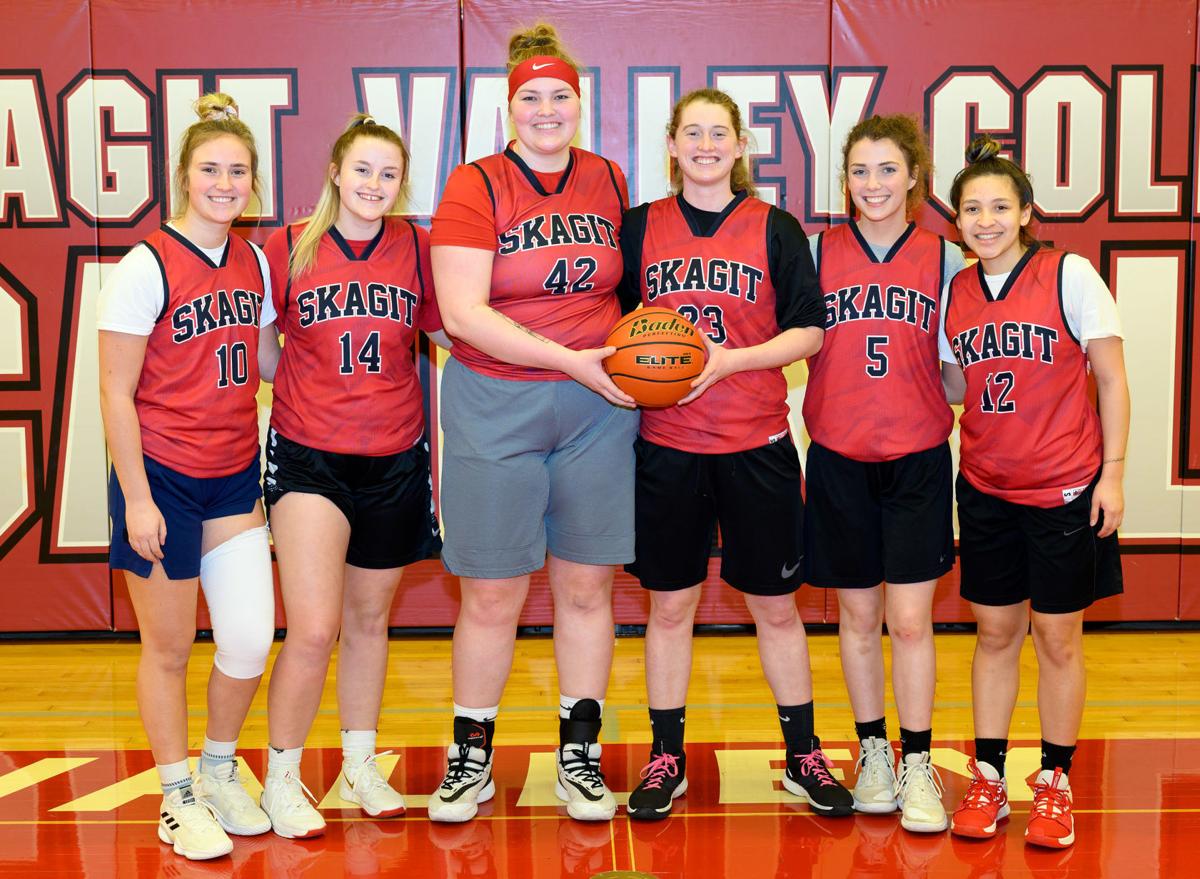 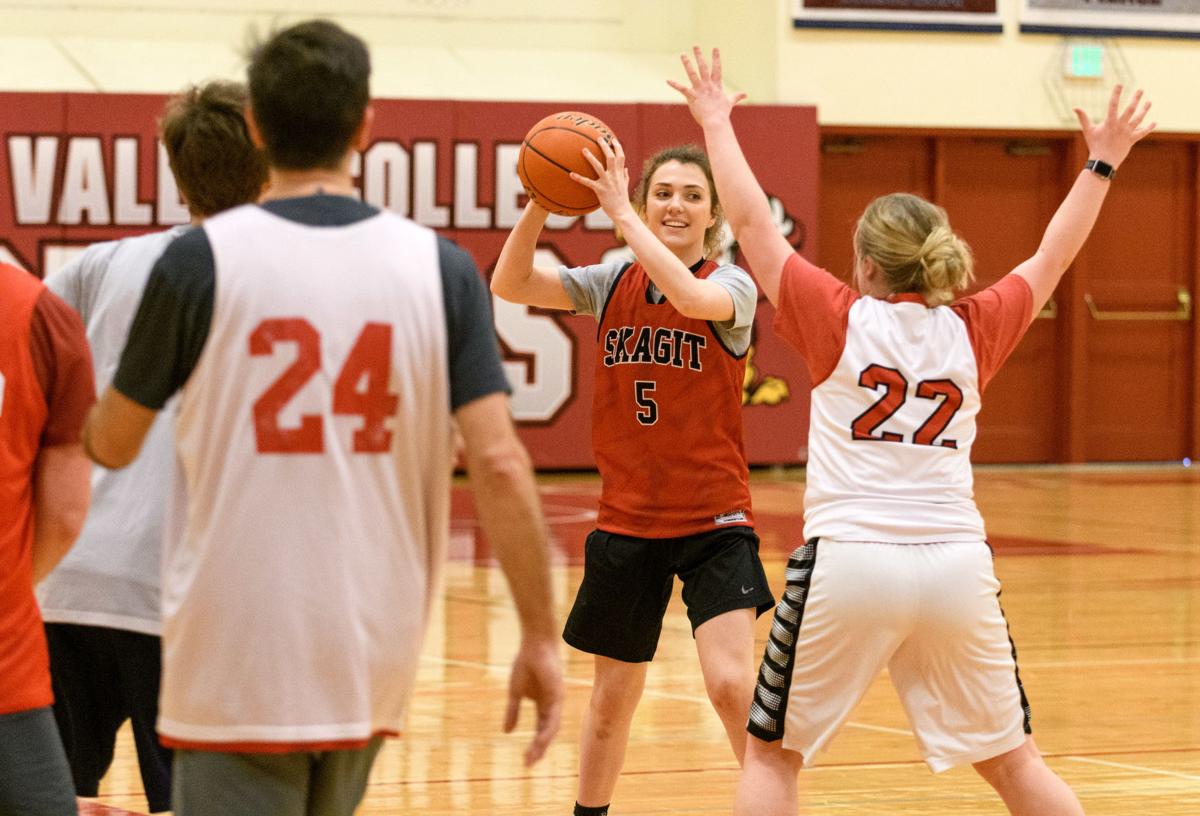 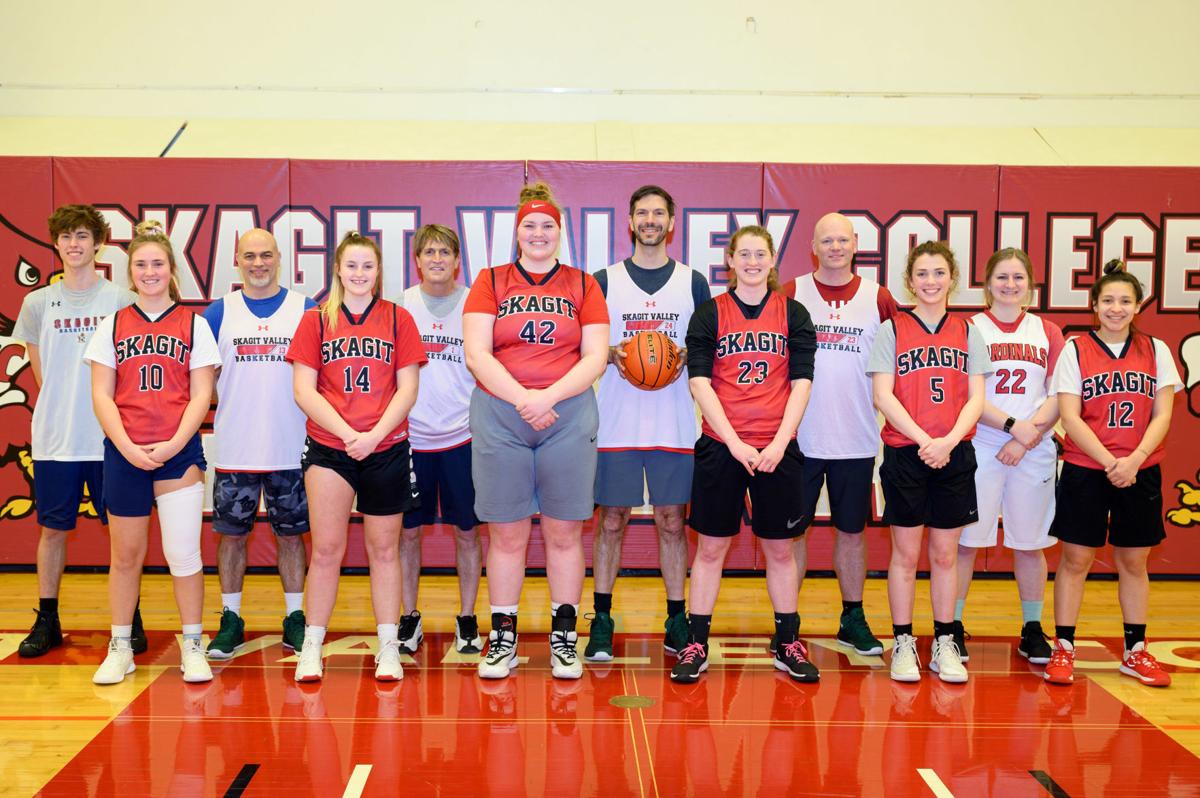 The Skagit Valley College women's basketball team, in red, stands Tuesday with its practice partners. The six-member team practiced this season with the help of faculty and other volunteers. 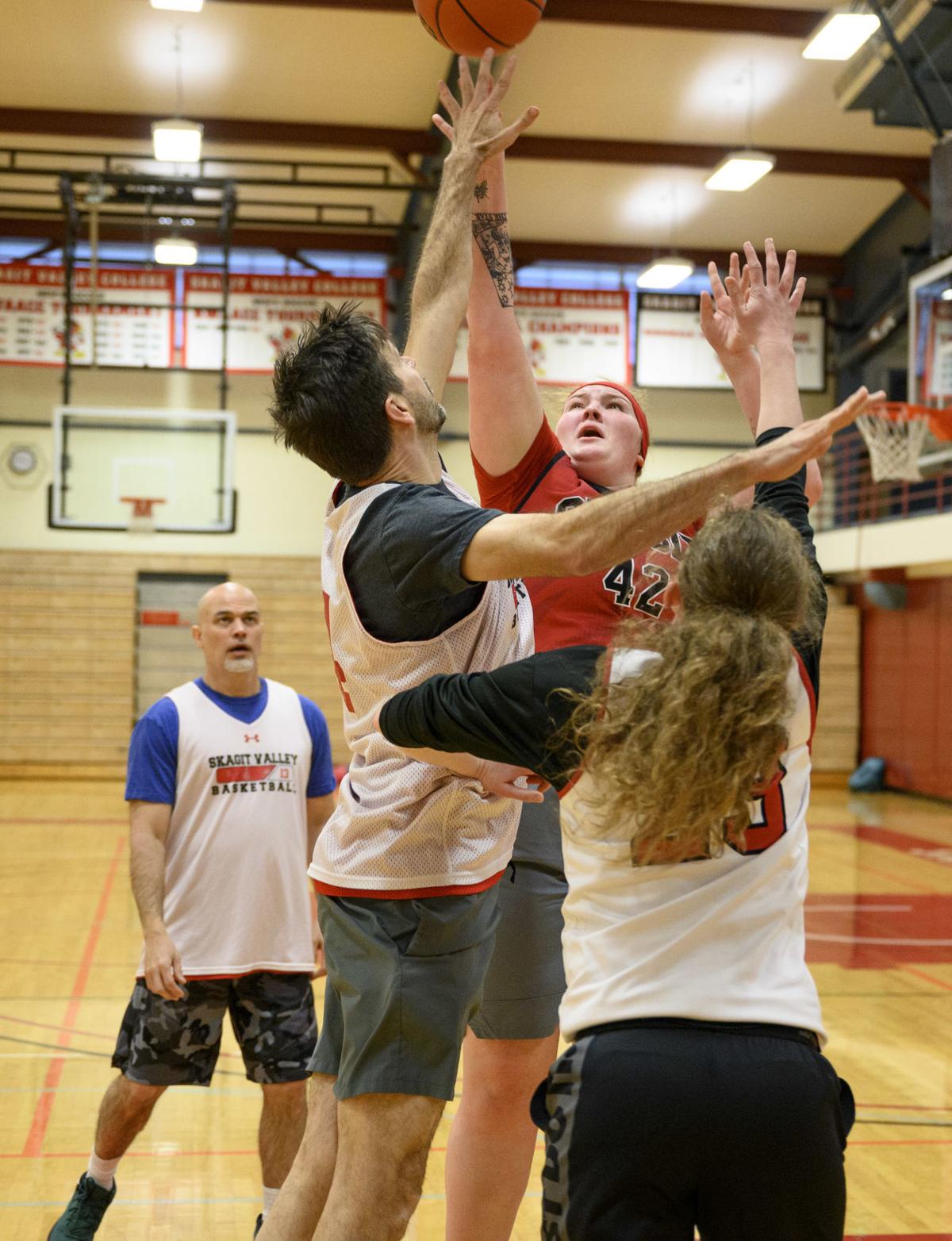 Melissa Frein, in red, gets some defensive opposition from a volunteer practice partner. 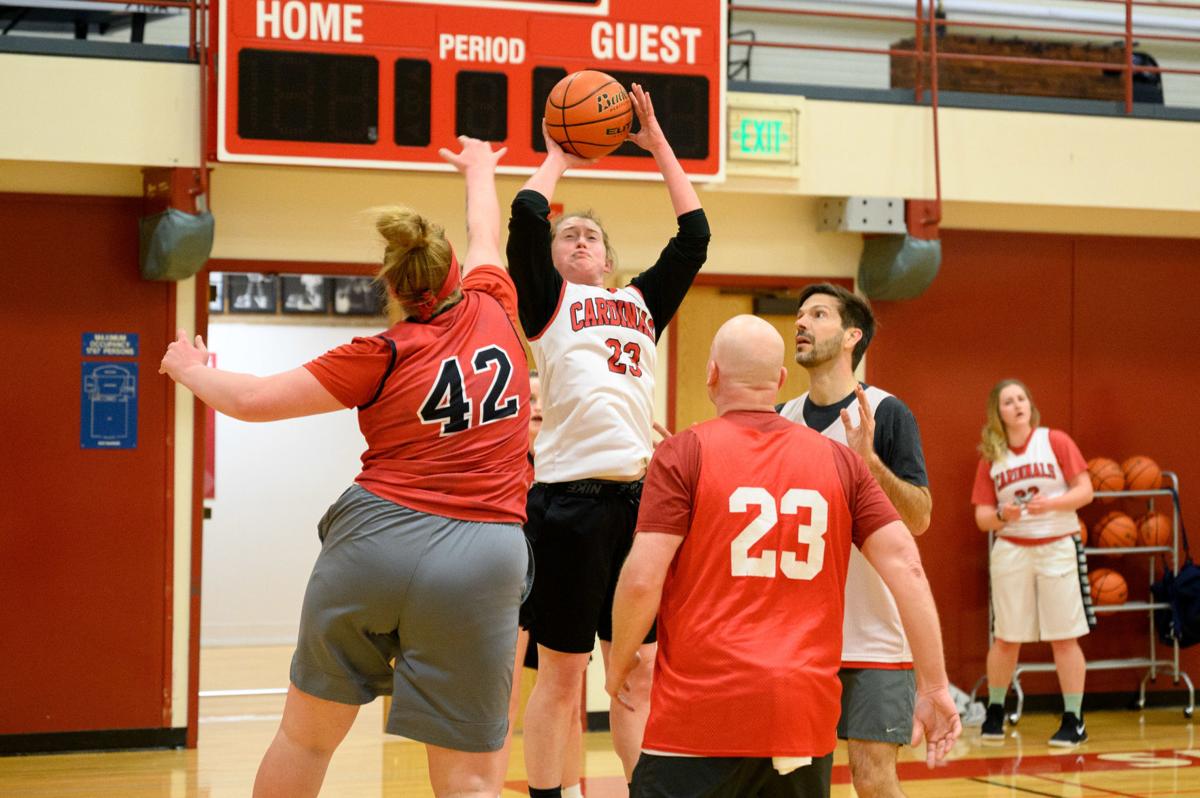 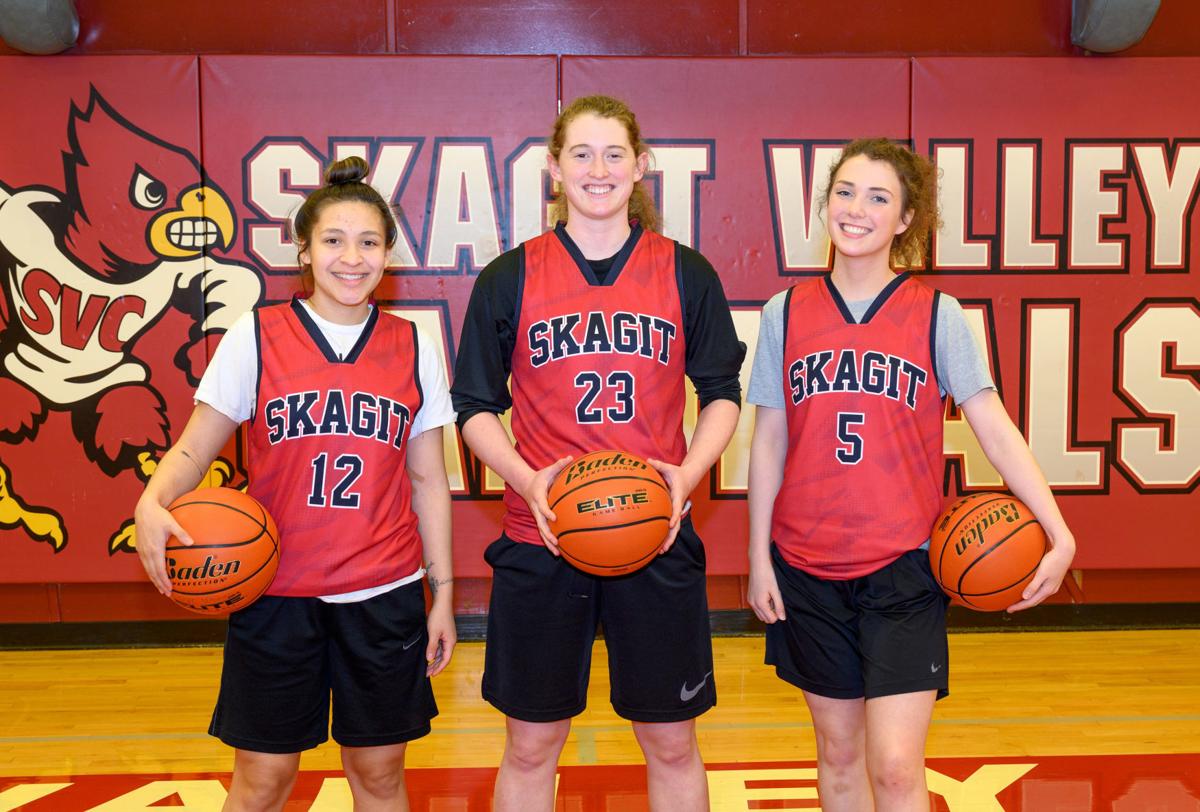 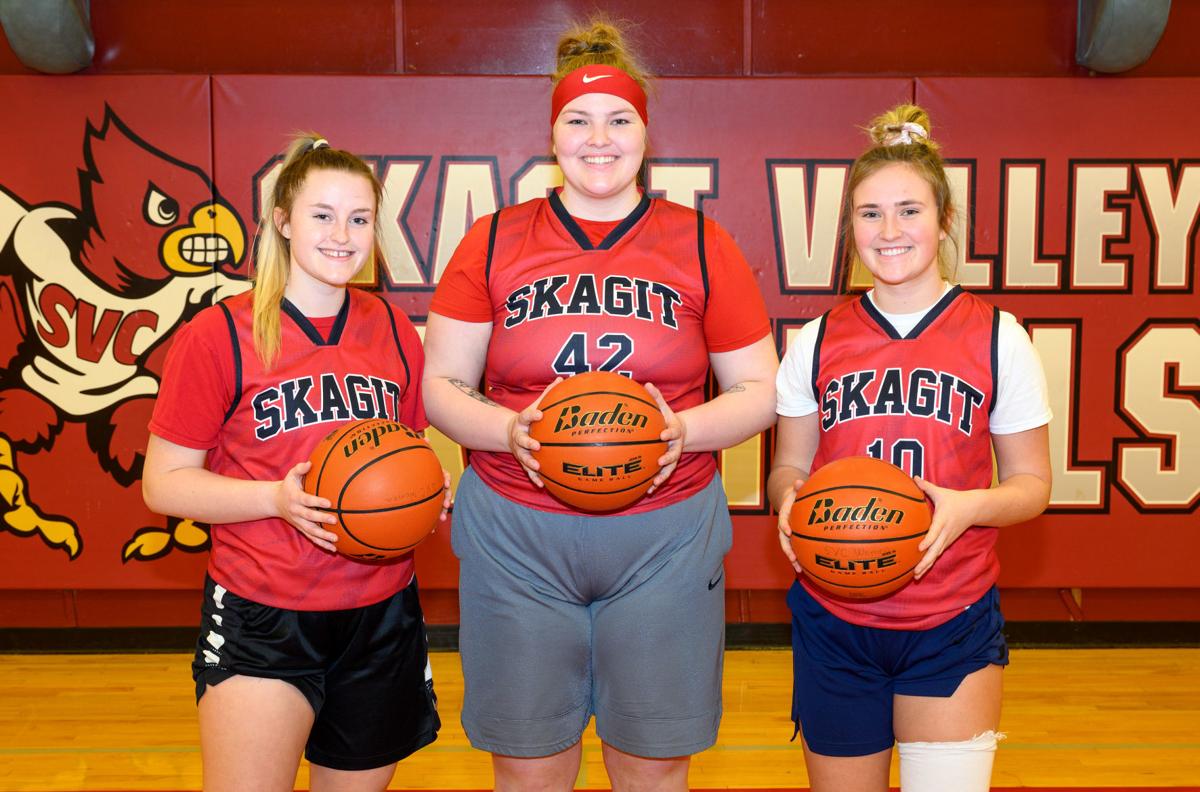 The Skagit Valley College women's basketball team, in red, stands Tuesday with its practice partners. The six-member team practiced this season with the help of faculty and other volunteers.

Melissa Frein, in red, gets some defensive opposition from a volunteer practice partner.

MOUNT VERNON — Though only five players are needed to play the game of basketball, teams usually have substitutes sitting the length of the bench.

That wasn’t the case this season for the Skagit Valley College women’s team.

The Cardinals played most of the season with only six players.

“At the beginning of the season, we had seven or eight,” freshman Melissa Frein said. “Then for different reasons, we lost players. Then it was, ‘What now? What do we do?’”

What the Cardinals did was play on.

“It has been very challenging for both of us,” coach Deb Castle said of she and assistant coach Steve Epperson. “Honestly, I don’t know how we are doing it.”

Sophomores Samantha Cox and Annaleis Reyes said the season was a lot of work.

“We get tired out there,” Reyes said. “Really tired. Then these other teams, they have 12 and even more on their bench. You’re tired, then here comes a second burst of fresh players. It’s tough ... Teams have pressed us all season.”

Teams with only six players have a lot to worry about, beyond just being in the kind of shape to withstand deeper teams. Players can foul out, or succumb to injury or illness.

“You had to be more careful, especially on defense,” Frein said. “Especially with fouls.”

There were a couple instances where the Cardinals had less than five on the court.

“We had to finish games with only four players,” sophomore Emily Toycen said. “We even won one of those. We’ve learned how to play smart and how to conserve our energy.”

With only four on the floor, the Cardinals beat Edmonds and lost to Highline.

Cox said the team learned to slow parts of the game down to allow for a rest, albeit brief.

“Playing with only six and a couple times finishing with four was brutal,” Cox added.

Toycen admitted to even feeling guilty at times when she got a break on the bench.

“Honestly, I felt bad sitting there on the bench, knowing my teammates were out there and I wasn’t,” she said.

The Cardinals finished the season 5-9 and in seventh place in the eight-team NWAC North Region and 11-15 overall.

Epperson, the team’s former head coach, endured this same type of situation years ago in his first season as coach.

“My first year, we started with real low numbers,” Epperson said. “But we managed to get to 10 ... As bad as it gets, it’s not that bad. It’s still basketball and you are still coaching. It’s been a lot of chaos this season, but it has been fun.”

Practice this season was another hurdle to clear.

The Cardinals welcomed members of the faculty, a redshirt player off the men’s team and a former Cardinal player into their practices.

Abel Gage is a math instructor at the college, Brian Hanchett a counselor, Jose Sanchez a Spanish instructor and Jason Lind a communication studies instructor.

“I just love playing basketball with the faculty,” Sanchez said. “I’ve been doing it for 17 years.”

“Deb asked me to help when it came to scrimmaging,” Schoolland said. “So I come out and help once a week.”

Castle, who completed her first season as head coach after 25 years as an assistant, and Epperson made the best of a less than ideal situation.

It was a season none of the players will forget, but one they would rather not repeat.

“Everything we’ve gone through we all still love the game,” Toycen said. “It brought us all really close together. We really had to be a team.”

Added Johnson, “They were all great teammates. We all definitely grew from this experience and we learned from it.”