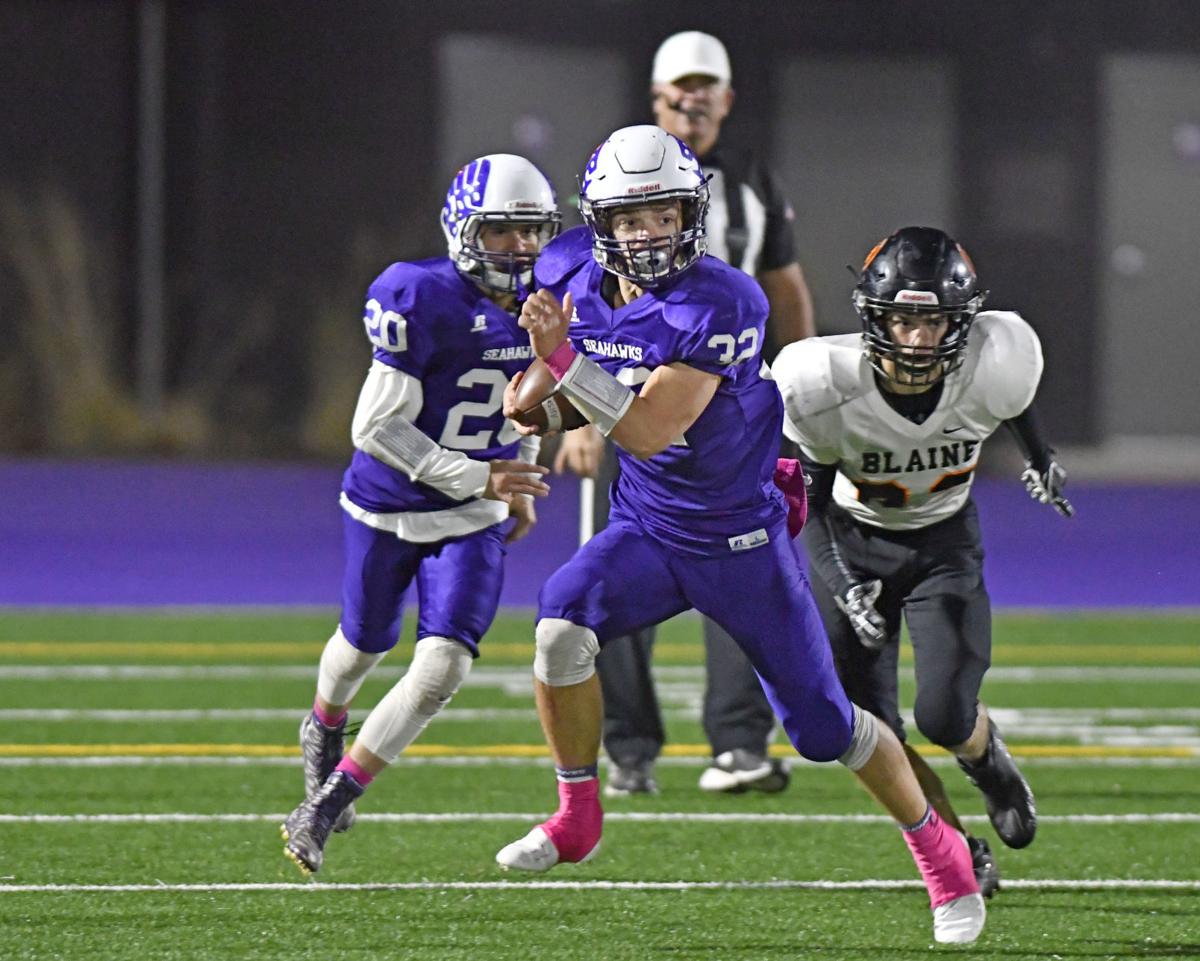 Anacortes’ Trevor Beaner looks up field as he turns the corner Friday at home against Blaine. 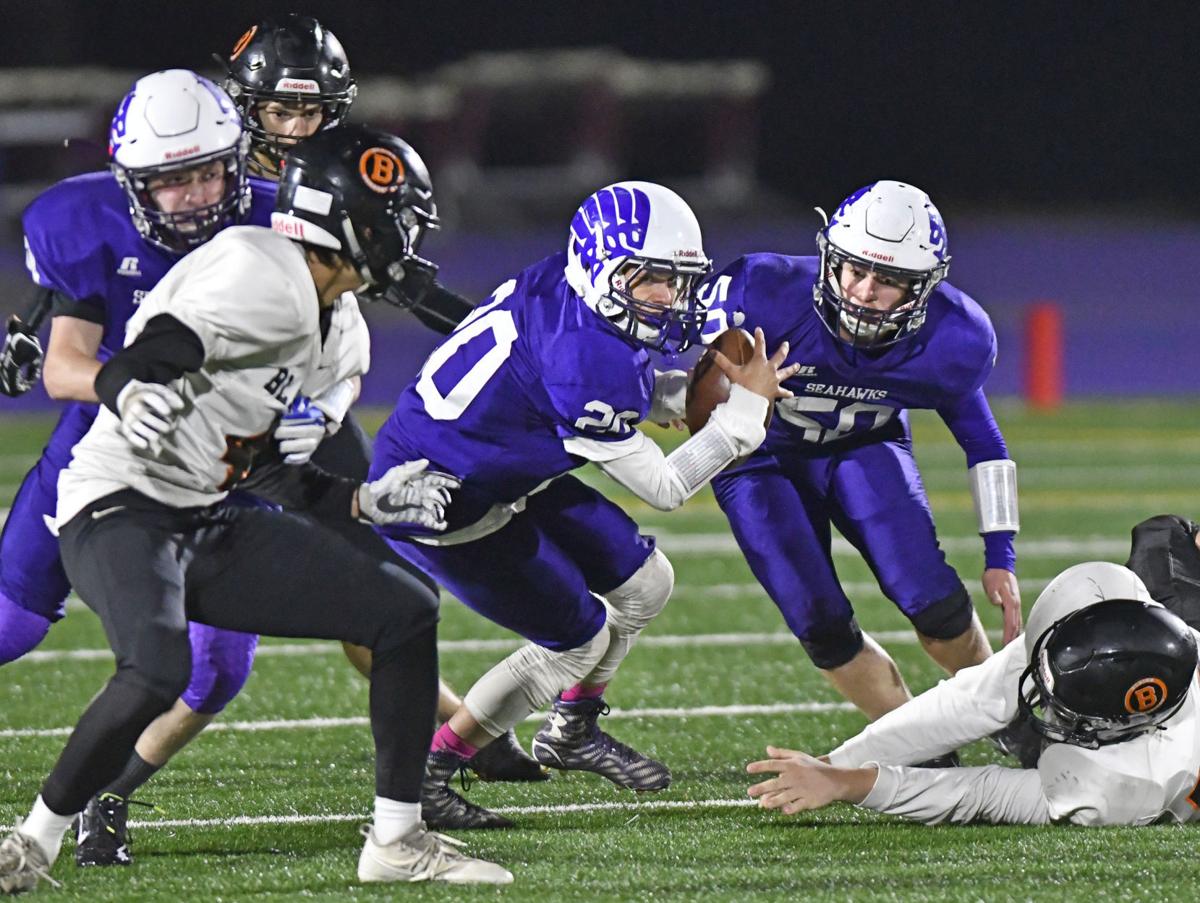 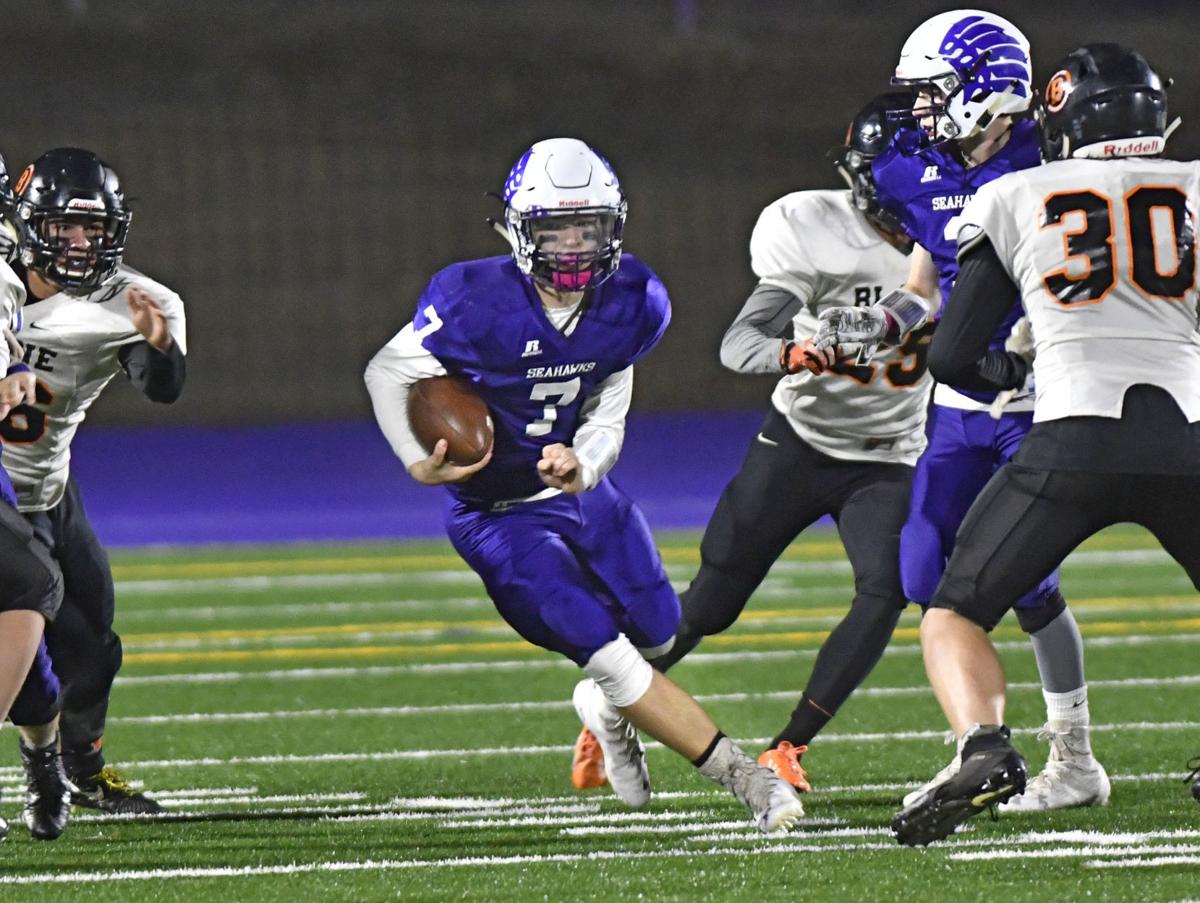 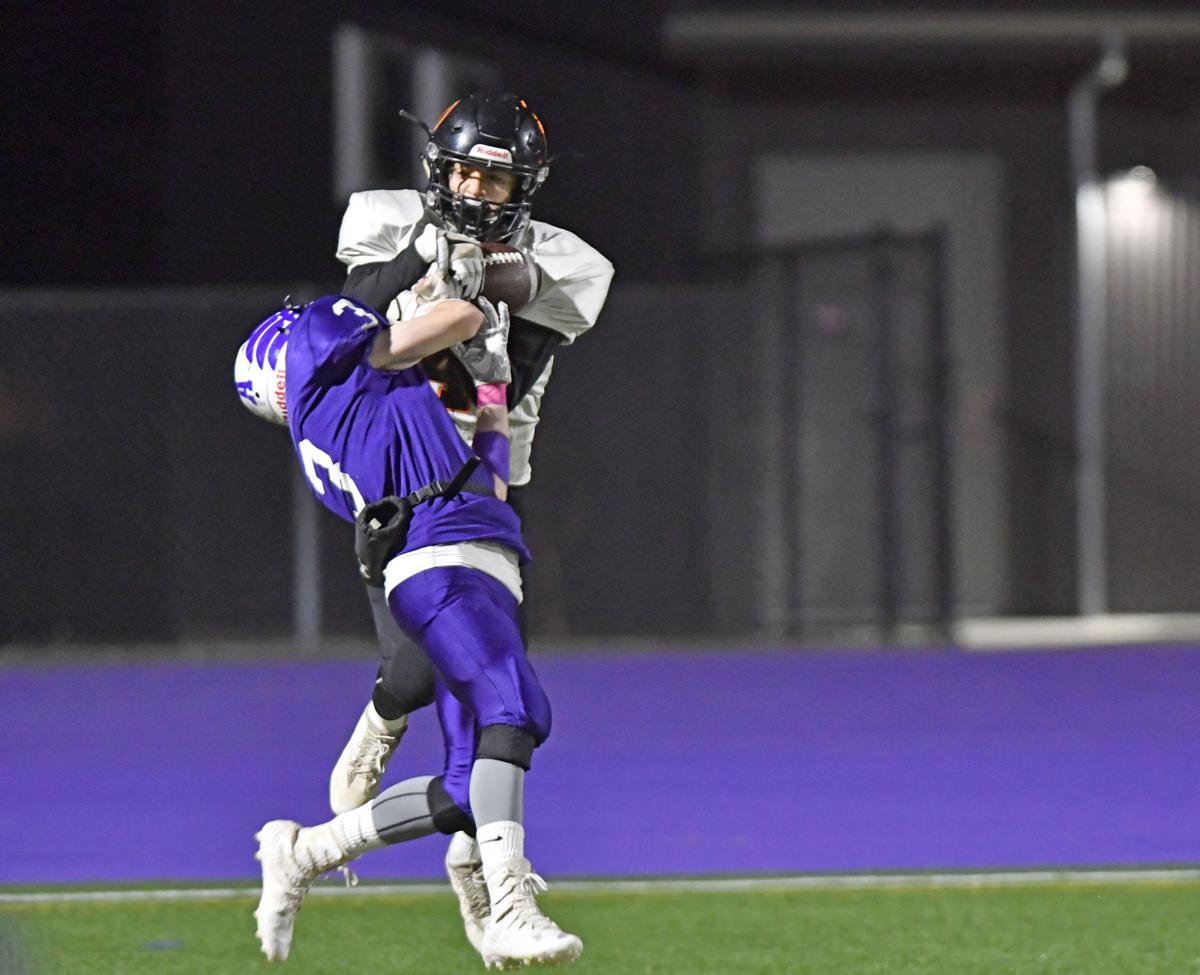 Anacortes’ Hadyn Weaver (3) tries to break up a pass Friday at home against Blaine. 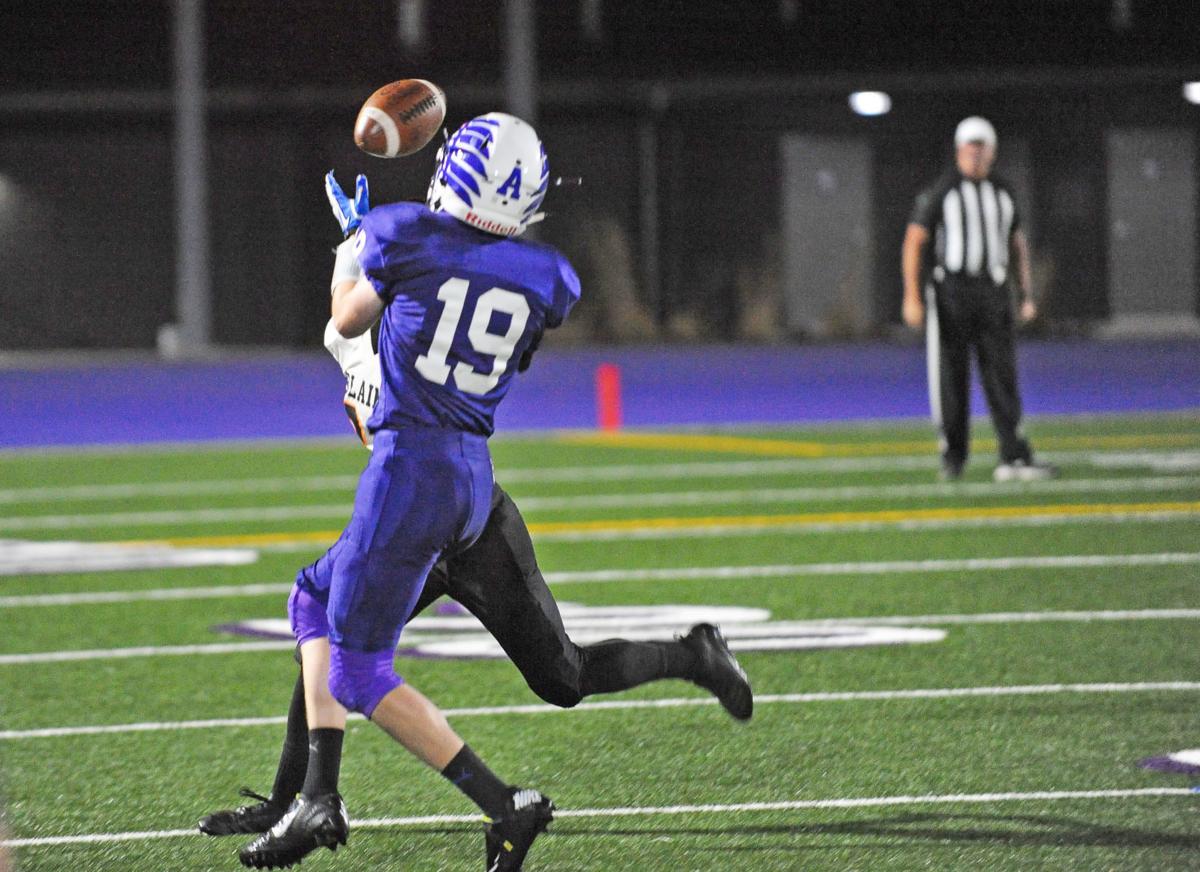 Anacortes’ Caleb Hunter pulls down a reception Friday night at home against Blaine.

Anacortes’ Trevor Beaner looks up field as he turns the corner Friday at home against Blaine.

Anacortes’ Hadyn Weaver (3) tries to break up a pass Friday at home against Blaine.

Anacortes’ Caleb Hunter pulls down a reception Friday night at home against Blaine.

ANACORTES — The Anacortes Seahawks’ quest for their first win continues.

On Friday, it was the Borderites of Blaine who handed Anacortes the 34-8 loss, pushing the Seahawks’ record to 0-5 in the Northwest Conference Lake Division and 0-7 overall.

“It’s been a rough season,” Anacortes coach Chris Hunter said. “But the boys went out and competed all four quarters. They didn’t quit and they played for each other and for the love of the game.”

EVERETT — The wins continue to mount up for the Bulldogs with the Western 4A Conference win, running their win streak to four, nabbing a playoff spot and spoiling the Knights homecoming.

“There was a lot to play for tonight,” Mount Vernon coach Nik Vaselchek said, “an awful lot. “And the kids knew what was at stake in this game and they played well.

“We were right at the door of the playoffs and instead of just walking through, they kicked the door down.”

The Knights were simply unable to stop Mount Vernon’s running game as the Bulldogs drove up and down the field, leading 36-0 at halftime.

The defense also got in on the action as Tyler Luvera returned an interception for a score.

“Tonight, it was a total team performance,” Vasilchek said. “This team took this game very seriously. We put the pedal to the metal and didn’t let up.”

The Bulldogs improved to 5-1 in conference and 7-1 overall.

EVERETT — The Wildcats are big, strong and they flexed their collaborative muscle in the Northwest Conference Sky Division game.

Archbishop Murphy averages 6-feet, 1-inch and 285 pounds across the front line and the Wildcats pushed the Cubs around late in the conference game.

Murphy scored four touchdowns in the fourth quarter to seal the victory.

Sedro-Woolley led 14-7 at halftime. The Wildcats tied the game, however, 14-14 to start the third quarter.

Archbishop Murphy then took its opening drive of the fourth quarter and converted it into points on a rushing touchdown to take the 21-14 lead.

The home team added another score midway through the final frame to take the 28-14 lead.

Sedro-Woolley’s offense finally got on track as Brent VanderVeen took the snap in the wildcat formation, catching the Wildcats completely off guard. He bolted 28 yards for the touchdown. The extra point was good and the score went to 28-21.

The ensuing kickoff was returned by the Wildcats to the Cubs’ 5-yard line. Two plays later, the Wildcats had answered the Cubs’ score to go up 35-21.

After Sedro-Woolley was stopped on the Wildcats 1-yard line on fourth down, Archbishop Murphy raced down the field and scored for the final tally.

The Cubs had that halftime lead after quarterback Carter Trammell threw a screen pass to VanderVeen, who raced 53 yards for the touchdown with six seconds left in the second quarter.

Sedro-Woolley tied the score 7-7 on its opening possession of the second quarter as Trammell found Jordan Rua on the bubble screen. Rua took the pass and 72 yards later was in the end zone.

LA CONNER — Homecoming doesn’t get much better than not only winning the game, but winning your first game of the season.

That’s exactly what the Braves did as they got the best of the Vikings in the nonleague game.

It looked bleak for the Braves early as they trailed 20-7 at halftime before storming back for the win in the second half as the fog rolled in.

“It was gutsy game by our team,” La Conner coach Peter Voorhees said. “The kids really responded after halftime. It was really great. It was homecoming. We honored the parents. It was a great win.”

Arjuna Adams carried the ball 21 times for 205 yards. He rushed for two touchdowns and also scored on a kickoff return.

FRIDAY HARBOR — Peyton Sanchez threw for two touchdowns but the Lions couldn't keep pace with their league opponent in the loss to the Wolverines.

Sanchez threw a 47-yard touchdown to Dalton Newby and a 61-yard strike to Devin Blankenship. Marshall Fichter scored on a 2-yard run — part of a 90-yard night for him — and Sanchez scored from 3 yards out.

Both teams are now 2-1 in the Northwest 2B/1B League. Concrete fell to 2-6 overall; the Wolverines improved to 5-3.

For the love of the game: Football players keep heads held high despite losses

Each week of football season, the Anacortes High School Seahawks players put on their uniforms and helmets, then walked out onto the field, ju…