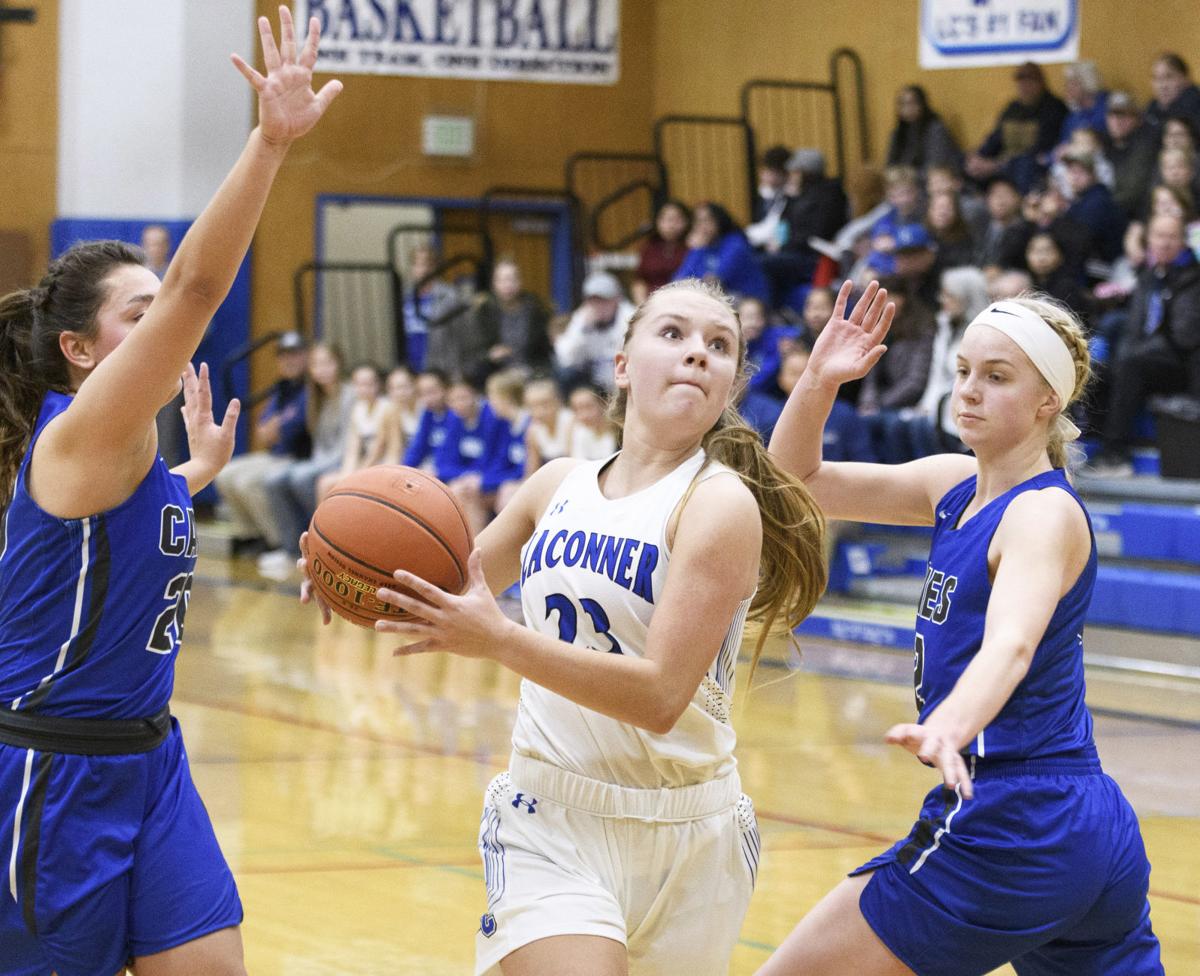 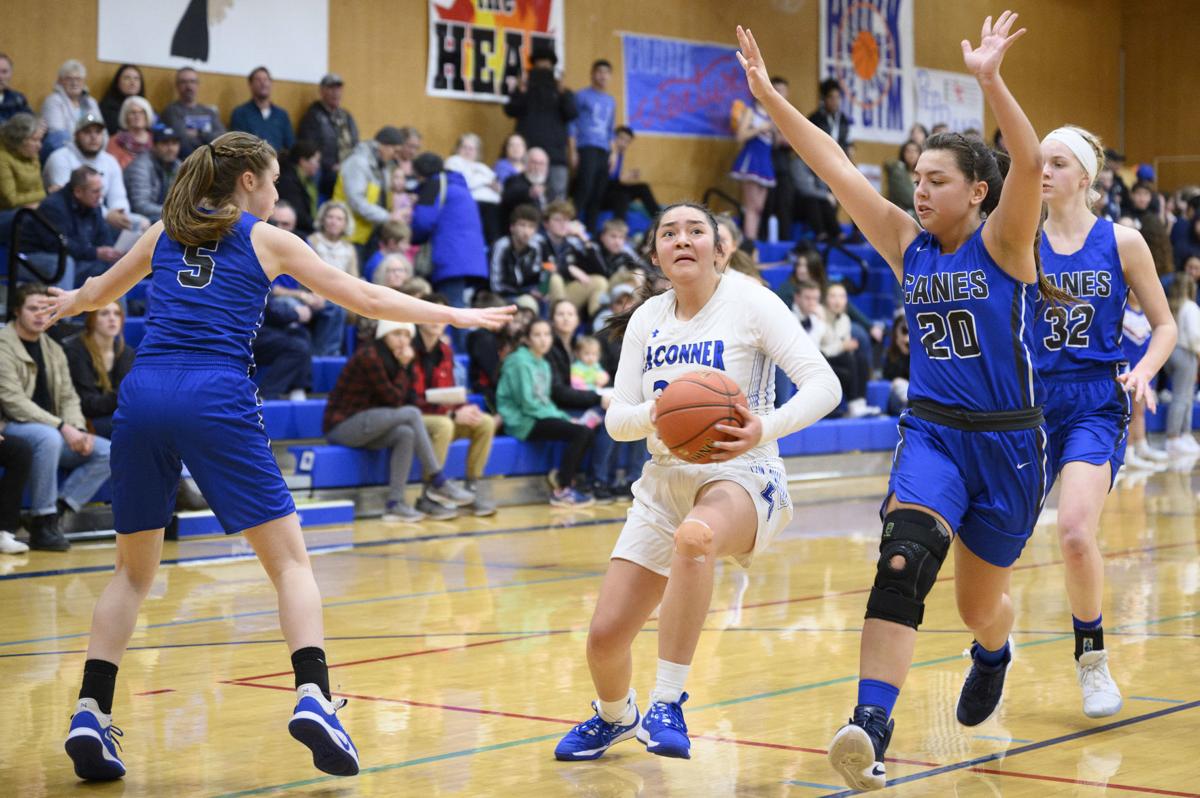 La Conner’s Sarah Cook drives to the basket after creating a turnover against Mount Vernon Christian on Friday in La Conner. 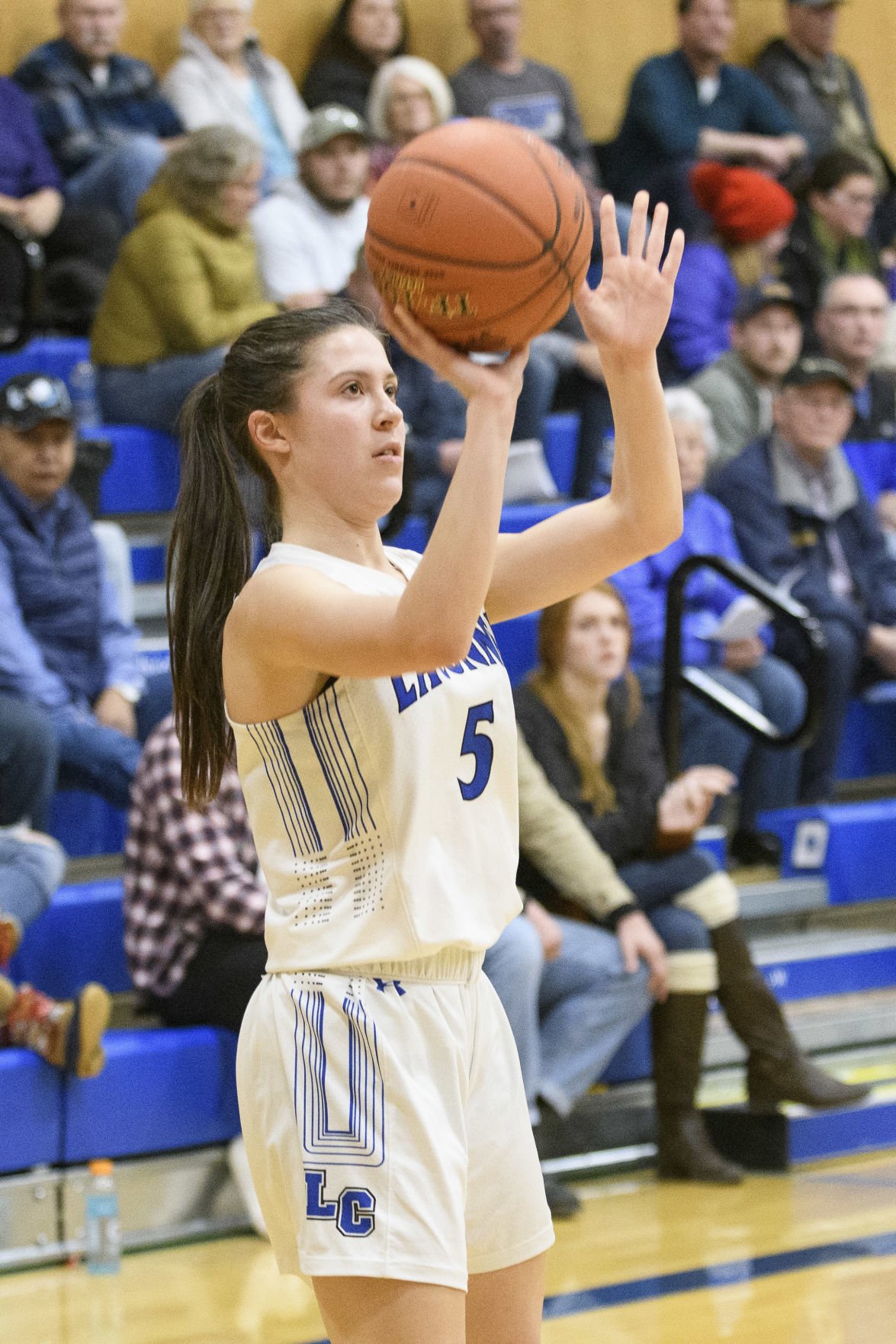 La Conner’s Sarah Cook drives to the basket after creating a turnover against Mount Vernon Christian on Friday in La Conner.

LA CONNER — Justine Benson and the La Conner girls’ basketball team got back on the winning track in a big way Friday against a county opponent.

Benson scored 34 points in a scorching performance from the field as the Braves topped Mount Vernon Christian 78-36 in a Northwest 2B/1B game.

“We just didn’t have an answer for Benson,” Mount Vernon Christian coach Jeff Droog said. “They are a very good team. But I love the way we came out and competed, particularly in the second half.”

Braves coach Scott Novak said Benson had a stellar night, but the bounce-back win was far from a one-player performance.

“I like how we played tonight on both ends of the floor. We were intense on defense and that led to a lot of offensive opportunities,” he said. “When we had to run our half-court offense, I like that we moved the ball and didn’t settle for early shots.”

BURLINGTON — It was a rough smart but a smoother finish for the Tigers against a Northwest Conference foe.

“We couldn’t get out of our own way in the first half. (Ferndale) controlled the tempo,” Tigers coach Brett McLeod said.

Burlington-Edison wore away at the Golden Eagles behind 11 points from Katie King, nine each from Emma Smith and Amey Rainaud and a seven-point, 11-rebound performance from Brylee Axelson-Ney.

“Brylee was our trigger person with defense, and Emma Smith got after it. The two of them really sparked us,” McLeod said.

MOUNT VERNON — Defense and solid shooting paved the way for the Bulldogs in the Wesco 4A game.

Halle Pelland hit several 3’s early, staking Mount Vernon to an early lead, and Victoria Heino heated up in the fourth quarter as the Bulldogs (3-2, 5-4) pulled away.

Heino ended the game with 17 points while Pelland scored nine.

“Aaliyah Angulo really rebounded well for us,” Nutting added. “She only had eight points, but most of those were offensive putbacks. She played a very steady game.”

LYNDEN — Makenna Peterson scored 10 points to lead the Cubs, but Sedro-Woolley had trouble slowing down a Lynden Christian team ranked third among Class 1A teams by RPI.

CONCRETE — The Loggers got hot from behind the 3-point arc in the second half of the Northwest 2B/1B game.

“They hit nine 3’s in the second half alone,” Concrete coach Kevik Rensink said. “One girl hit seven of those. Defensively, we lost our responsibilities and offensively, we got sloppy.”

Kylie Clark scored 12 points and pulled down seven rebounds for a Lions squad that is 0-2 in league and 0-7 overall.

EVERETT — The Bulldogs were careless with the ball and the Marauders took full advantage of the opportunities as they pulled away for the Wesco 4A win.

“We’ve been averaging 10 turnovers so far this season, we had 11 at halftime and 24 for the game,” Mount Vernon coach Roger Valentine said.

“We were down by six at halftime,” Valentine said. “They hit a three to start the third and then we turned the ball over three straight possessions. We ended up scoring six points in that quarter.”

The Bulldogs are 2-3 in conference and 6-5 overall.

“They did an excellent job executing the game plan,” La Conner coach Todd Hinderman said. “We’ve been working on adjustments based on the team we’re playing ... they took that to heart and did what the coaches asked.”

EVERSON — Anacortes dropped to 2-3 in the Northwest Conference and 6-6 overall.

“We were just gun shy to shoot the ball,” Anacortes coach Brett Senff said. “And Nooksack Valley capitalized on it.”

Grayson Eaton finished with 14 points for the Seahawks while Kaeden Flynn scored 12.

CONCRETE — Darrington held a single-digit lead at halftime but pulled away in the second half.

“The shooters did a good job shooting with confidence,” Concrete coach Levi Stewart said. “We’re taking steps forward. We just had a few spans through the game where we gave up a run that was rough to recover from.”