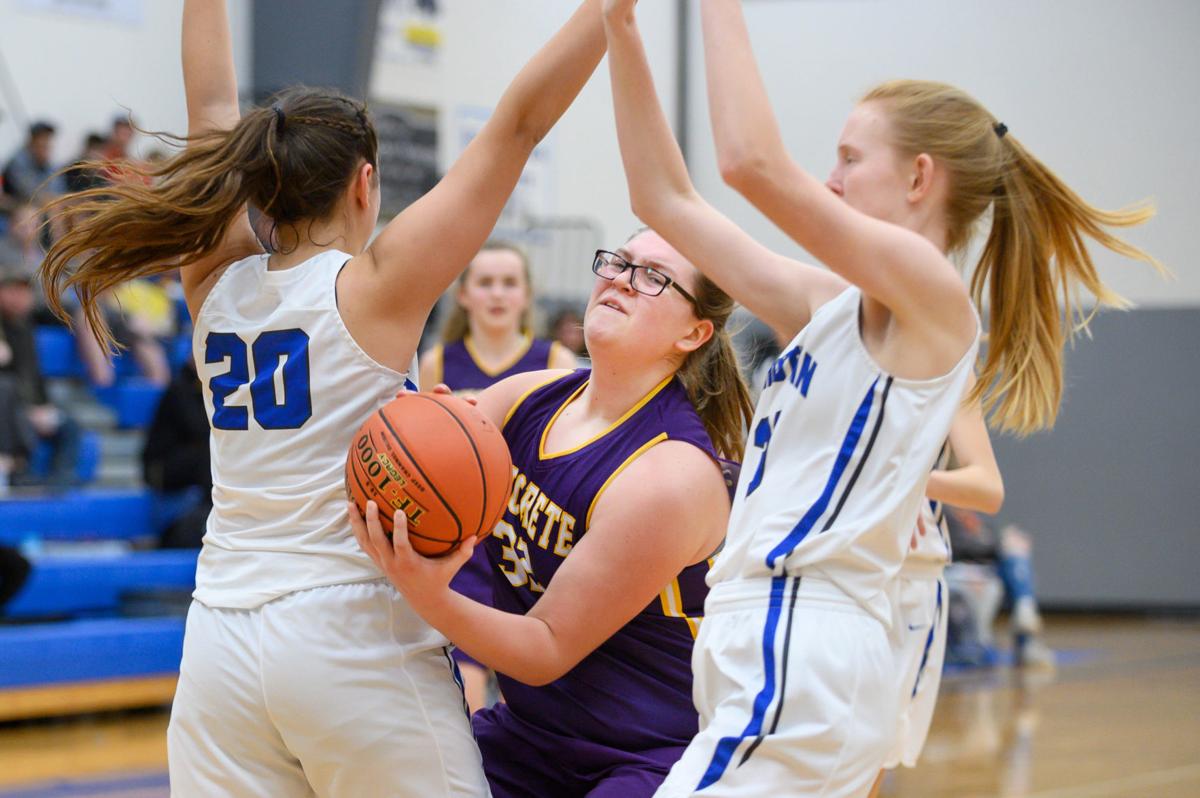 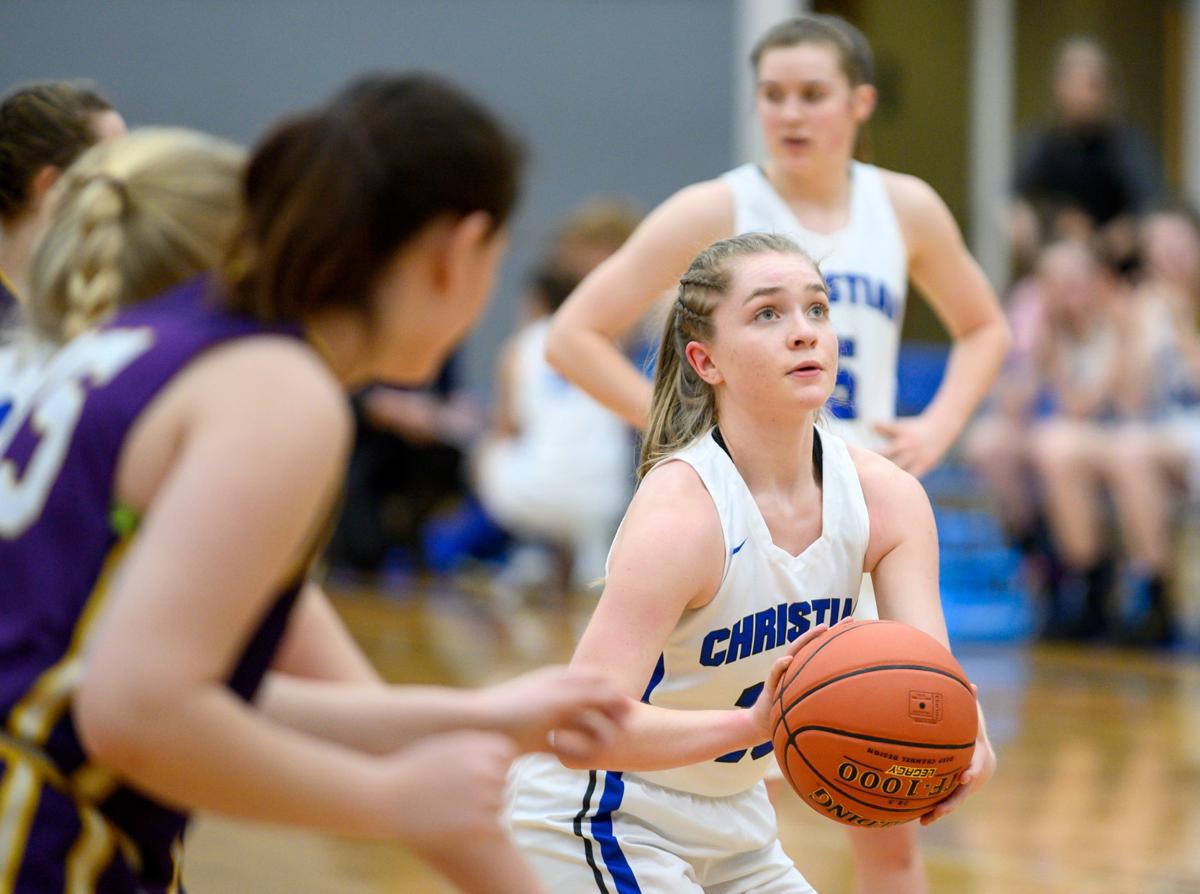 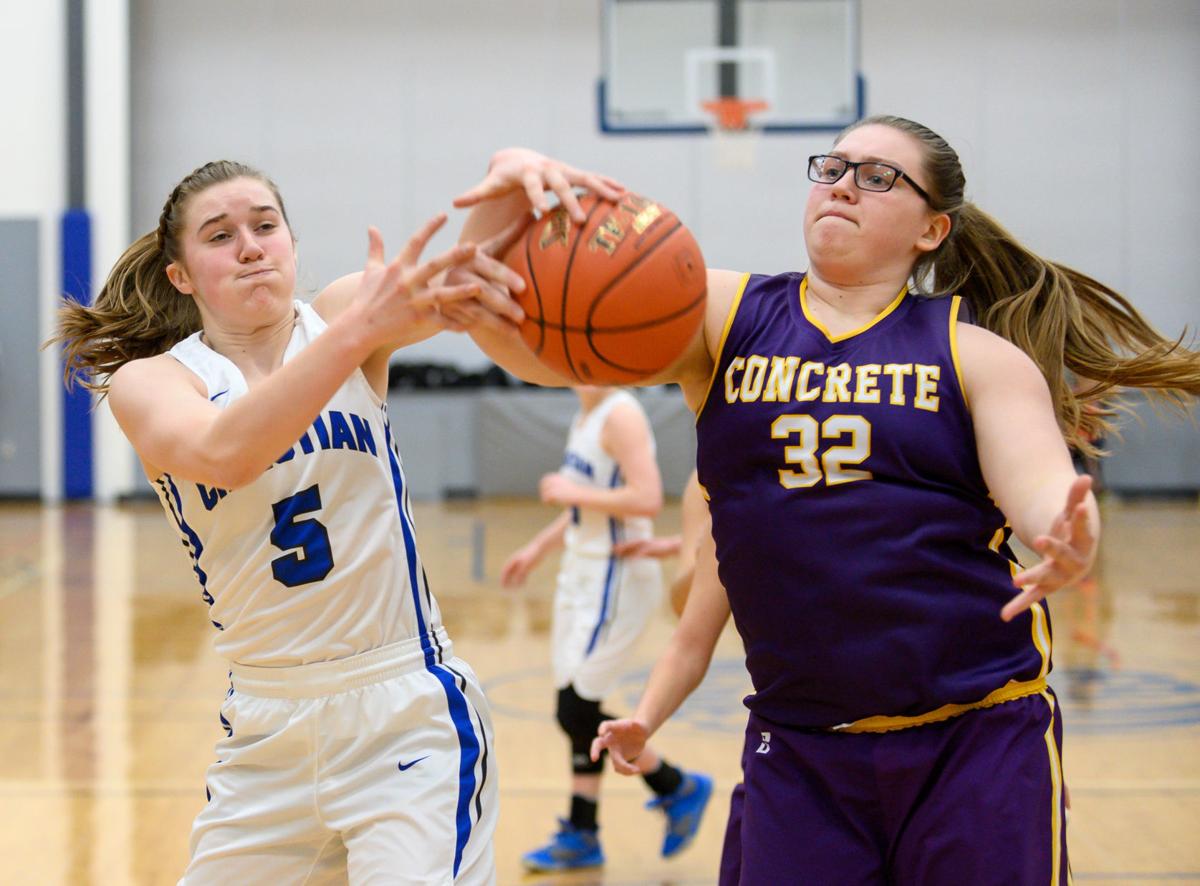 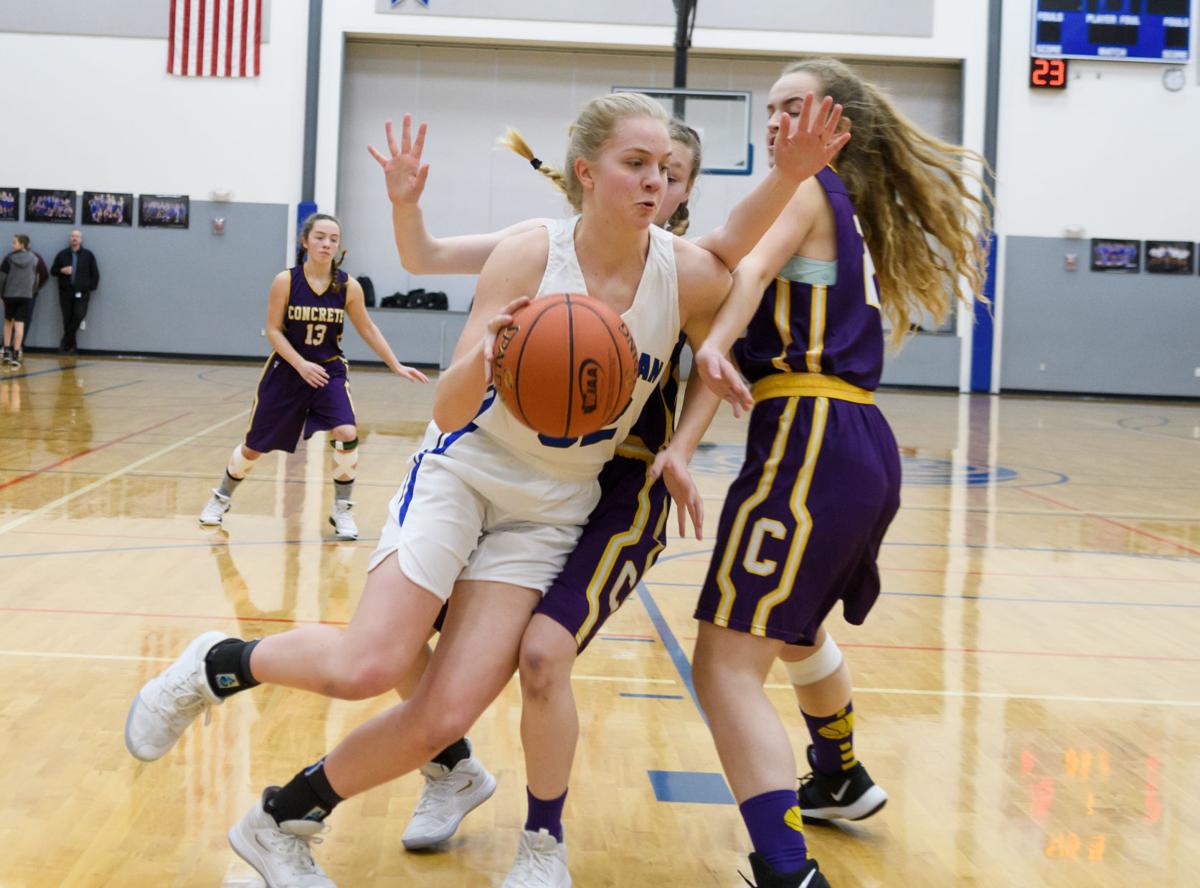 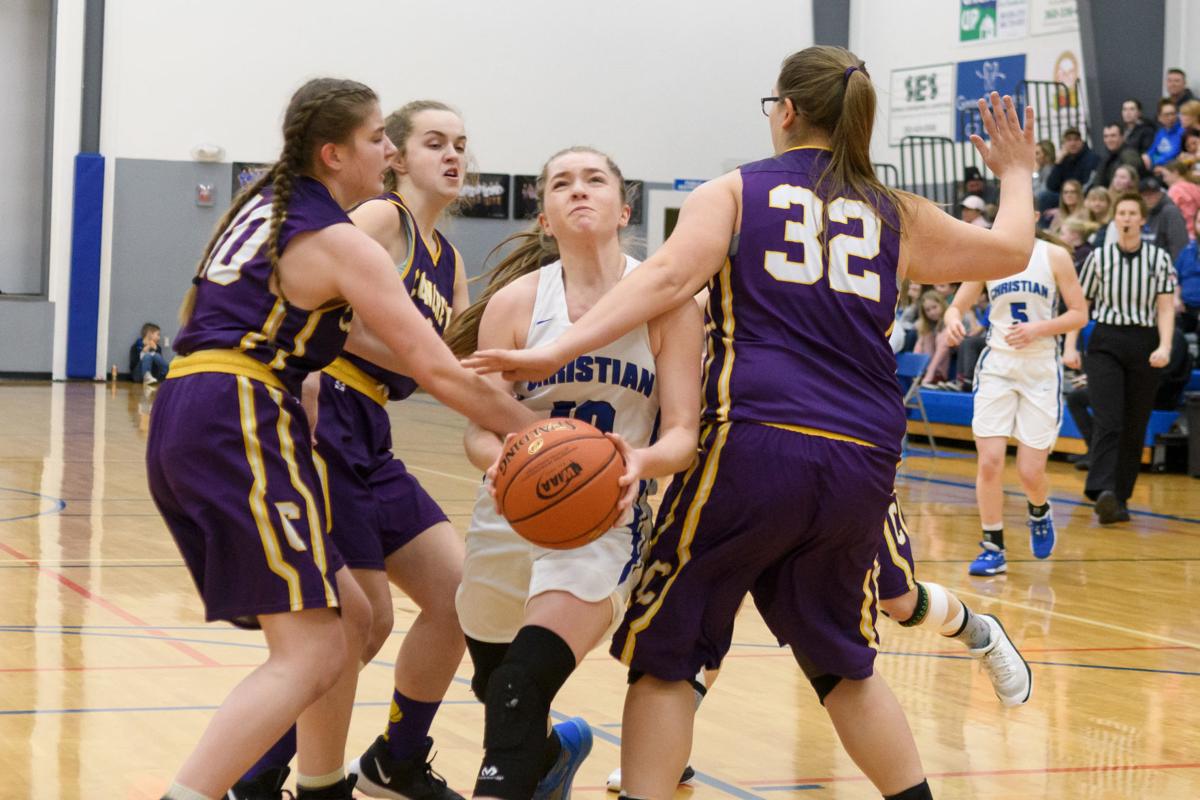 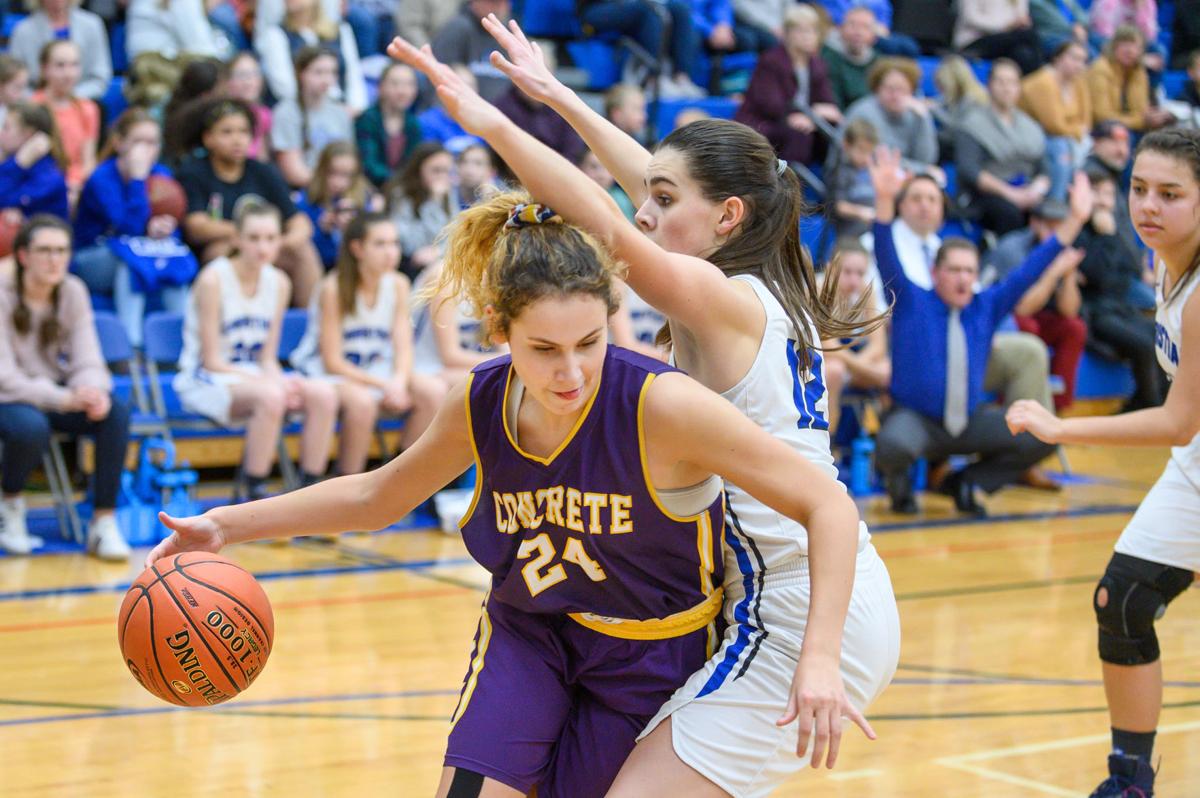 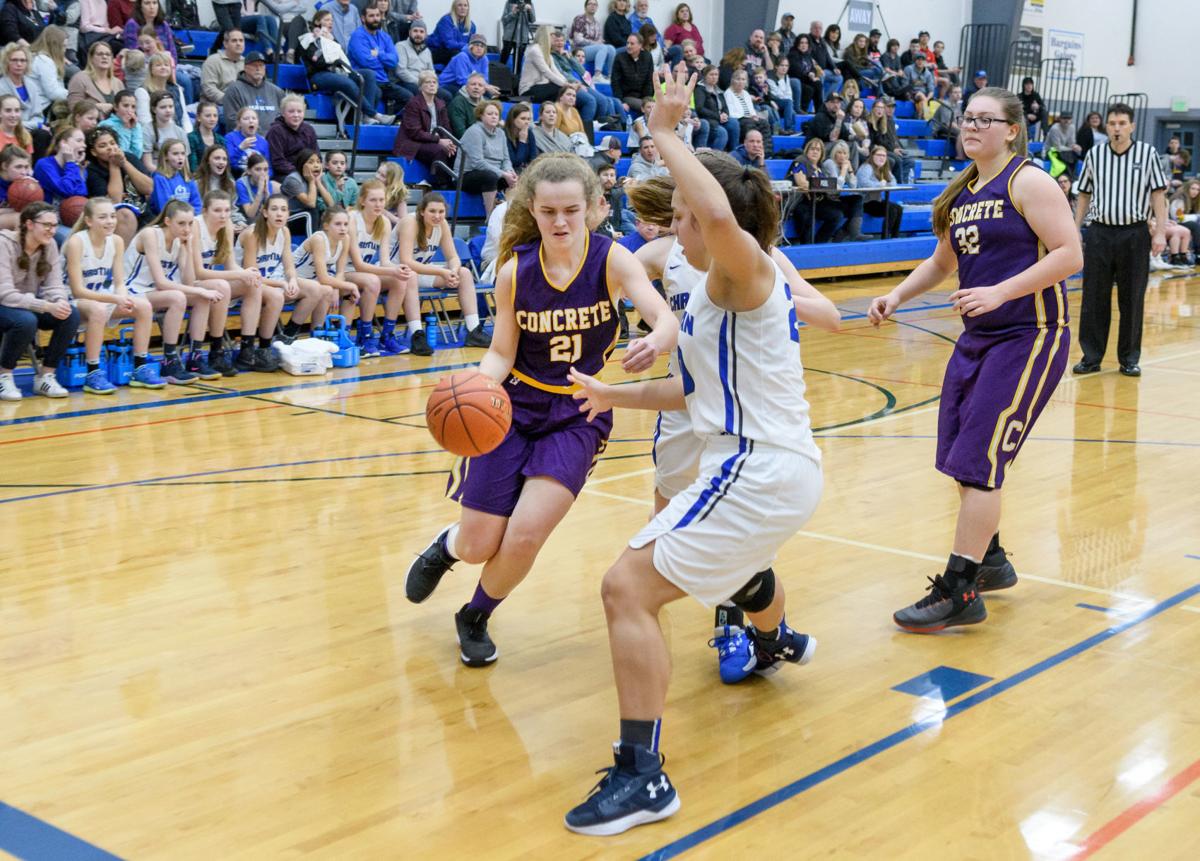 MOUNT VERNON — The Mount Vernon Christian girls’ basketball team rolled to a win Tuesday against Concrete in the Hurricanes’ final regular-season game before heading into the postseason.

“We moved the ball really well,” Mount Vernon Christian coach Jeff Droog said. “They put a box-and-one on Josie (Droog) and she did a great job finding wide-open kids.”

EASTSOUND — Justine Benson scored 25 points and Sarah Cook scored 23 points as the Braves improved to 8-0 in the Northwest 2B/1B League and 16-2 overall.

“We got out in transition very well at times; when we got that going we were rolling. We just need to need clean up a few things on defense,” Braves coach Scott Novak said.

EVERSON — The Tigers battled the Pioneers for the majority of the Northwest Conference game before eventually getting the best of the home team.

“This was really a good game for us,” Burlington-Edison coach Brett McLeod said. “We were down at times. But we executed the best we have all season on offense and defense. Everyone was clicking and that’s good to see.”

Katie King and Sydney Reisner each scored 18 points to lead the Tigers (10-2 conference, 16-3 overall), while Miranda Maskell finished with 15 points.

EVERETT — Victoria Heino scored 14 points, Maliyah Johnson scored 11 points, and the Bulldogs won the Western 4A Conference road game to improve to 6-6 in conference and 8-9 overall.

“Mariner has really improved and played a good first half, but our girls came together in the third quarter ... that was a big quarter for us,” Bulldogs coach Bill Nutting said. “I was proud of the effort. It was a game that could have gotten away from us, but didn’t.”

BELLINGHAM — Makenna Peterson had 16 points and eight rebounds but the Cubs couldn’t slow down the Red Raiders’ outside shooting as Bellingham hit nine 3-pointers.

“Overall, we didn’t have any answer for their long-range shooting tonight,” Cubs coach Rene Pedroza said.

SEDRO-WOOLLEY — Senior night was a success for the Cubs as Sedro-Woolley won the Northwest Conference game.

“It was a good effort,” Sedro-Woolley coach Chris Spencer said. “Bellingham was scrappy. They outrebounded us in the first half. I felt we took a few too many outside shots.”

The Cubs (4-8 conference, 9-10 overall) turned it up in the second half after leading by three at the break. The lead was seven at the end of the third. The home team eventually pulled away in the fourth.

“Guerero did his damage inside and outside,” Spencer said. “He did a little bit of everything. He was steady all night.”

MOUNT VERNON — Noah Lubbers hit three 3-pointers on his way to a team-high 21 points, Nick Wyatt had 16 points and seven rebounds, and the Hurricanes (5-5 Northwest 2B/1B League, 9-11 overall) wrapped up their regular season with a win on senior night.

Chris Wyatt had 10 points for the Hurricanes, who will host Providence on Thursday in the first round of the district tournament.

EASTSOUND — The Braves got plenty of shots off but struggled to have them fall through the hoop against the Vikings.

“We got off 76 shots to Orcas Island’s 60,” La Conner coach Todd Hinderman said. “The kids are doing everything right. They’re working their butts off. Just can’t get the ball to fall.”

Andre Knudson and Elijah Porter both finished the Northwest 2B/1B League game with 10 points, while Charlie Cram pulled down 12 rebounds and had six steals for La Conner (4-4 league, 6-11 overall).

“Charlie is the smallest guy on the court,” Hinderman said. “But he works hard. Andre (Knudson) played great defense for us. He was on a guy that scored 30 the last time we played. Tonight, he was held to 14.”