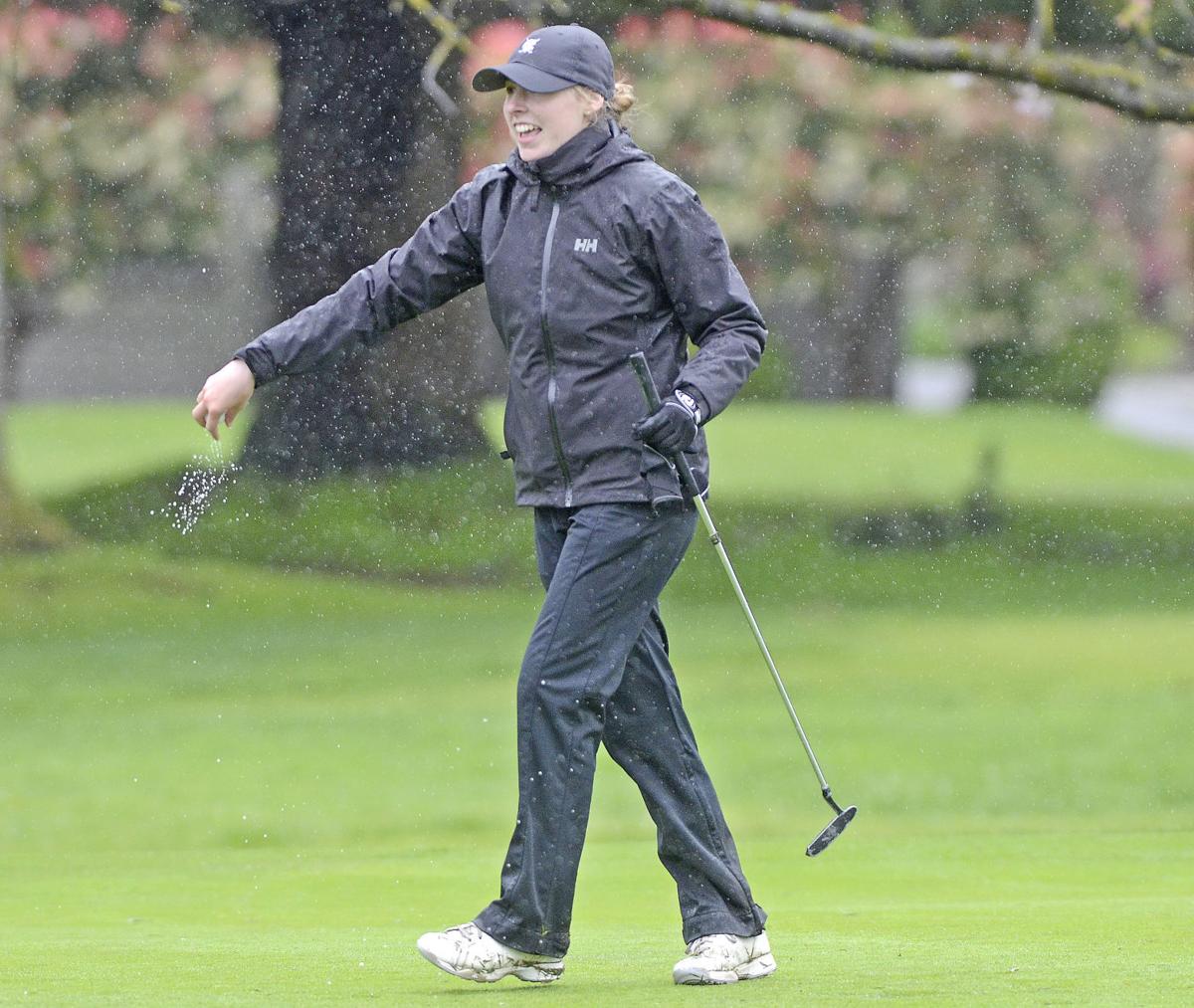 Mount Vernon’s Annie Gilbert shakes off her ball after retrieving it from the cup on the 15th green Monday at Skagit Golf & Country Club. 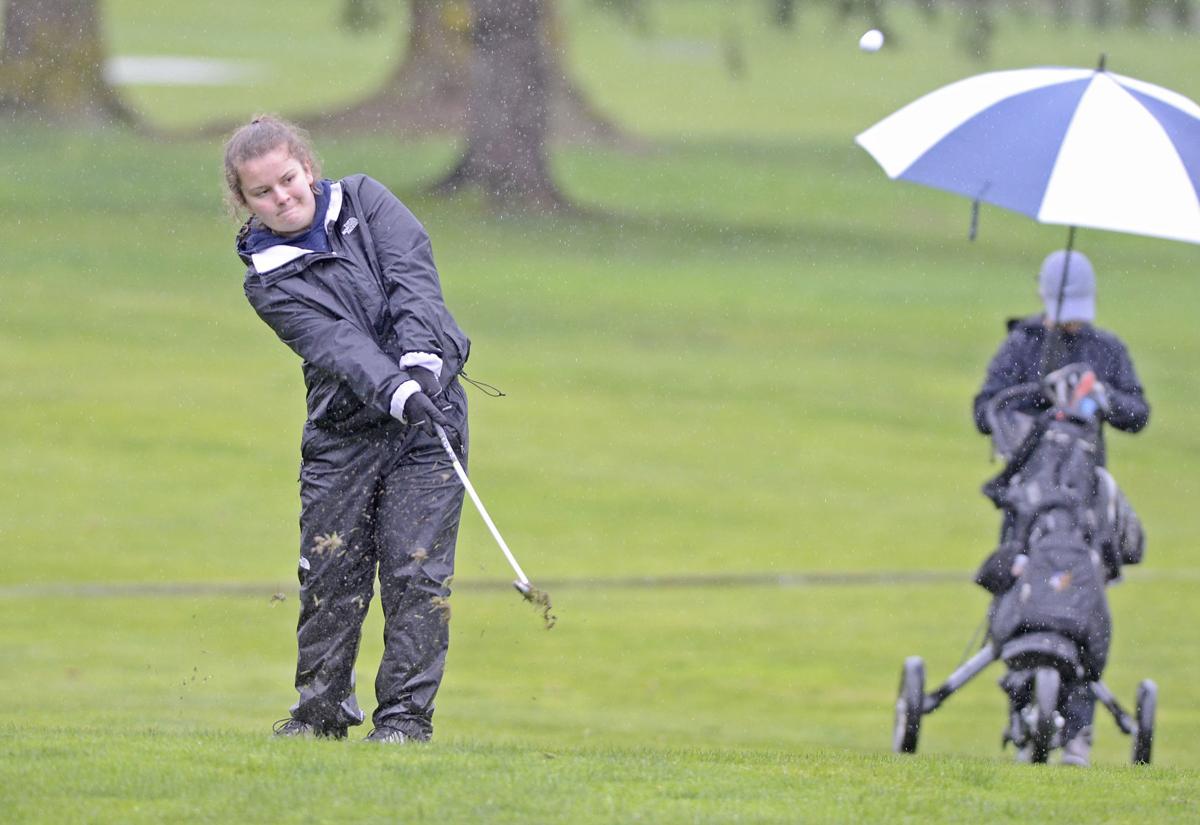 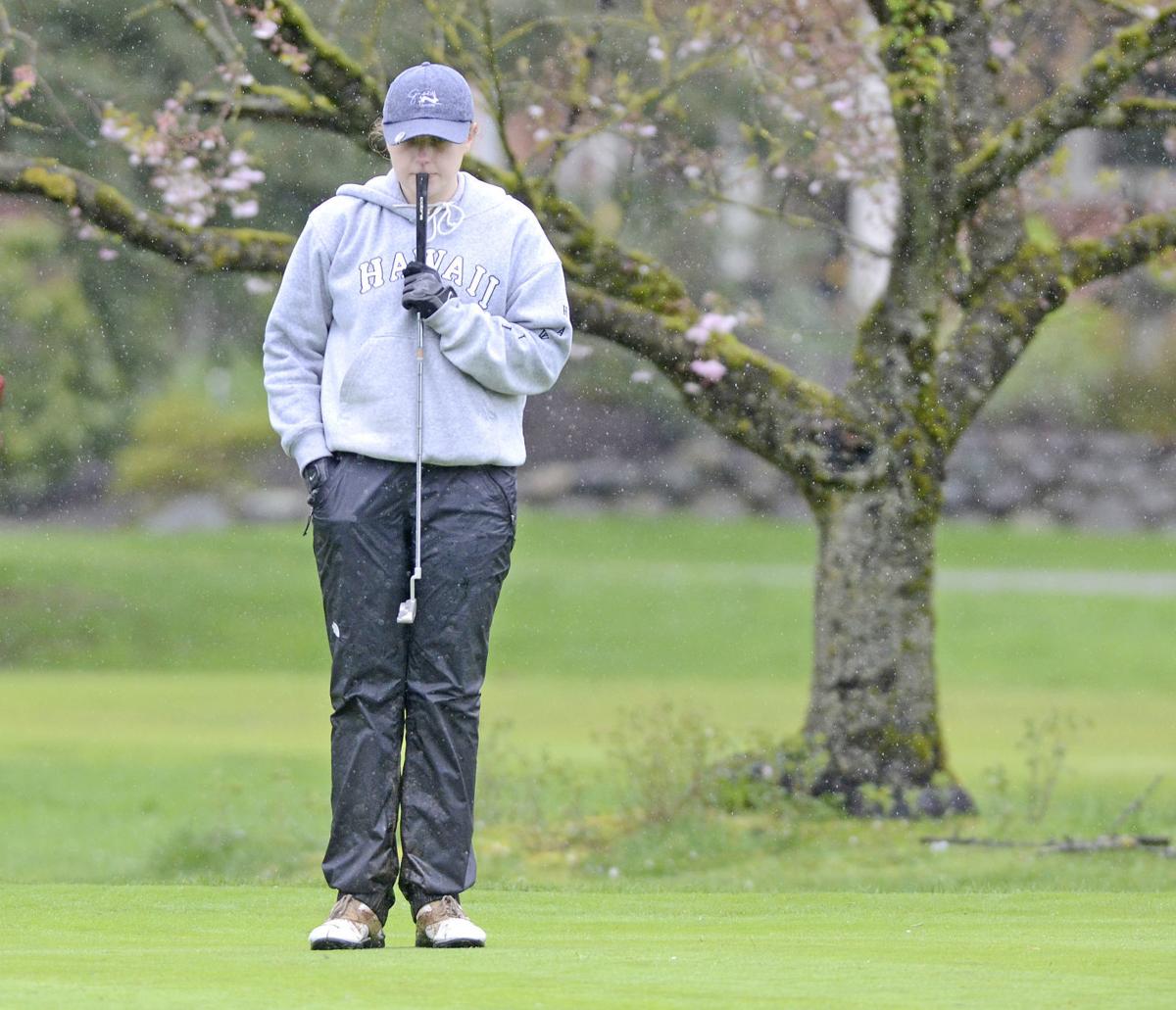 Burlington-Edison's Sadie Brink sizes up a putt on the 15th green Monday at Skagit Golf and Country Club.

Mount Vernon’s Annie Gilbert shakes off her ball after retrieving it from the cup on the 15th green Monday at Skagit Golf & Country Club.

Burlington-Edison's Sadie Brink sizes up a putt on the 15th green Monday at Skagit Golf and Country Club.

“(The rain) never stopped,” Burlington-Edison coach Greg Knutzen said. “And it was cold. There wasn’t any wind, so that was good. But playing in those sorts of conditions is not a lot of fun.”

Despite standing water, soggy greens and slick grips, the Tigers still managed to finish eighth overall, tallying a score of 441, while Mount Vernon was 12th with a 493.

“Our kids keep plugging along,” Knutzen said. “I am really pleased with how everyone played. We keep holding our own and improving.”

Mercer Island High School topped the 21 teams with a total of 355. The Islanders successfully defended their title from a year ago.

Sammamish was second with 383 followed by Central Kitsap with 413.

The tournament boasts a different format with each team entering up to six golfers. The No. 1, 2 and 3 golfers on each team played 18holes, while No. 4, 5 and 6 played nine holes.

“Each team used their three 18-hole scores,” Knutzen said, “and their best two nine-hole scores to make their team score.”

Burlington-Edison’s Ashleigh Mason placed 20th with an 18-hole, 103. Her teammate Madeline Hundahl finished sixth in the nine-hole field with a 52.

Anacortes’ Sierra Oliver shot 112 for 18-holes to lead the Seahawks.

Taking medalist honors was Central Kitsap’s Brittany Kwon, who shot a 76. Kwon is a three-time invite champion and a two-time defending state champion.

“She was very deserving,” Knutzen said of Kwon again capturing the title. “She is a very good golfer.”

Mount Vernon at Western 4A Conference

SNOHOMISH — The Bulldogs squared off against seven other school at Kenwanda Golf Course.

The Bulldogs finished fifth overall with a team score of 222. Kamiak was the top team, tallying a 199.

Glacier Peak’s Chase Gardner with the medalist with his round of 36.

Kyle Cooley paced Mount Vernon, by finishing in a five-way for sixth with a score of 40.

BELLINGHAM — Josh Altenhofen came away with medalist honors for the Tigers as he shot a 74, leading Burlington-Edison to the team victory.

The Tigers finished with a score of 398.

“That was huge for him,” Burlington-Edison coach Charlie Herzberg said of Altenhofen’s win.

ANACORTES — The Seahawks had little trouble notching their 14th win in a row and their ninth shutout of the season.

“The conditions were miserable,” Anacortes coach Pat Swapp said. “But the game itself really wasn’t impacted by the weather. Our kids practice in it all the time, so they are used to it.”

Anacortes is 9-0 in the Northwest Conference and 15-1 overall.