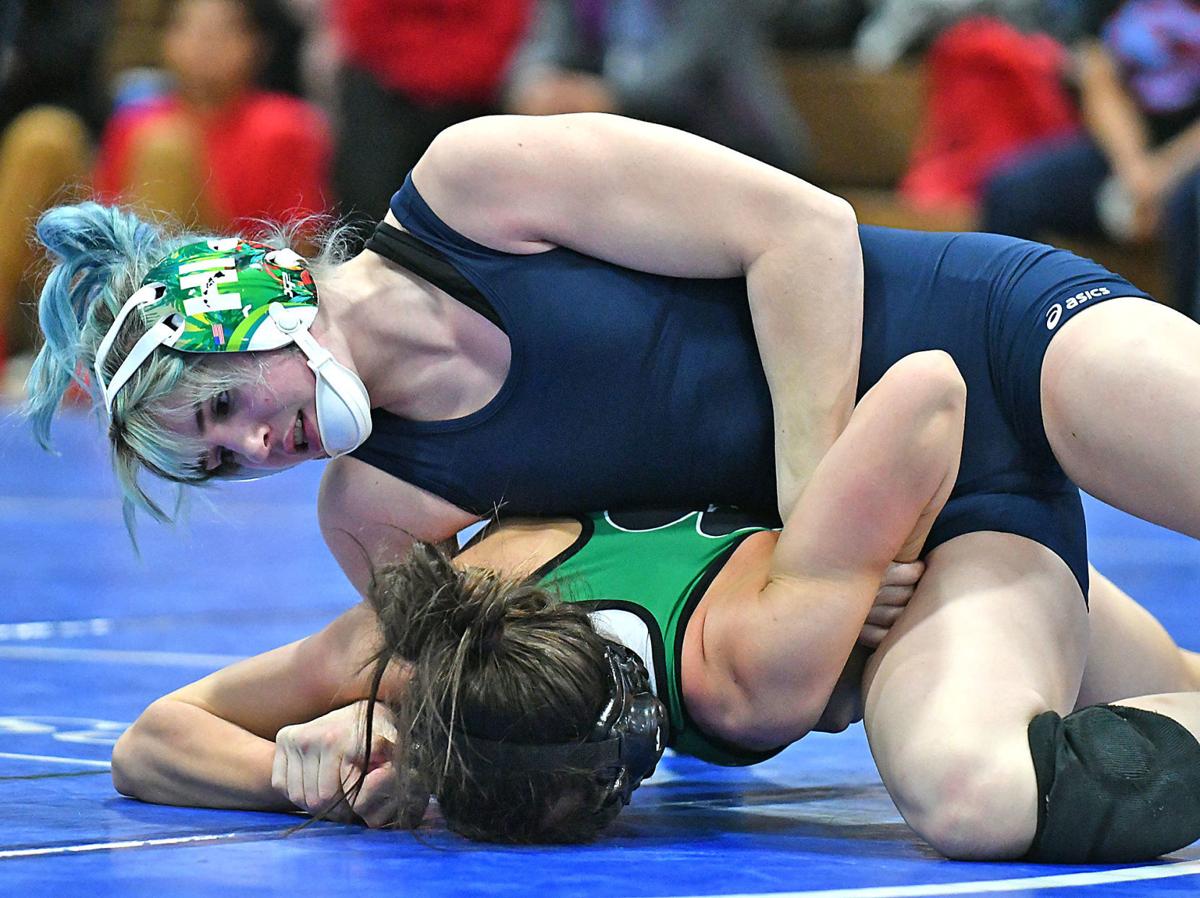 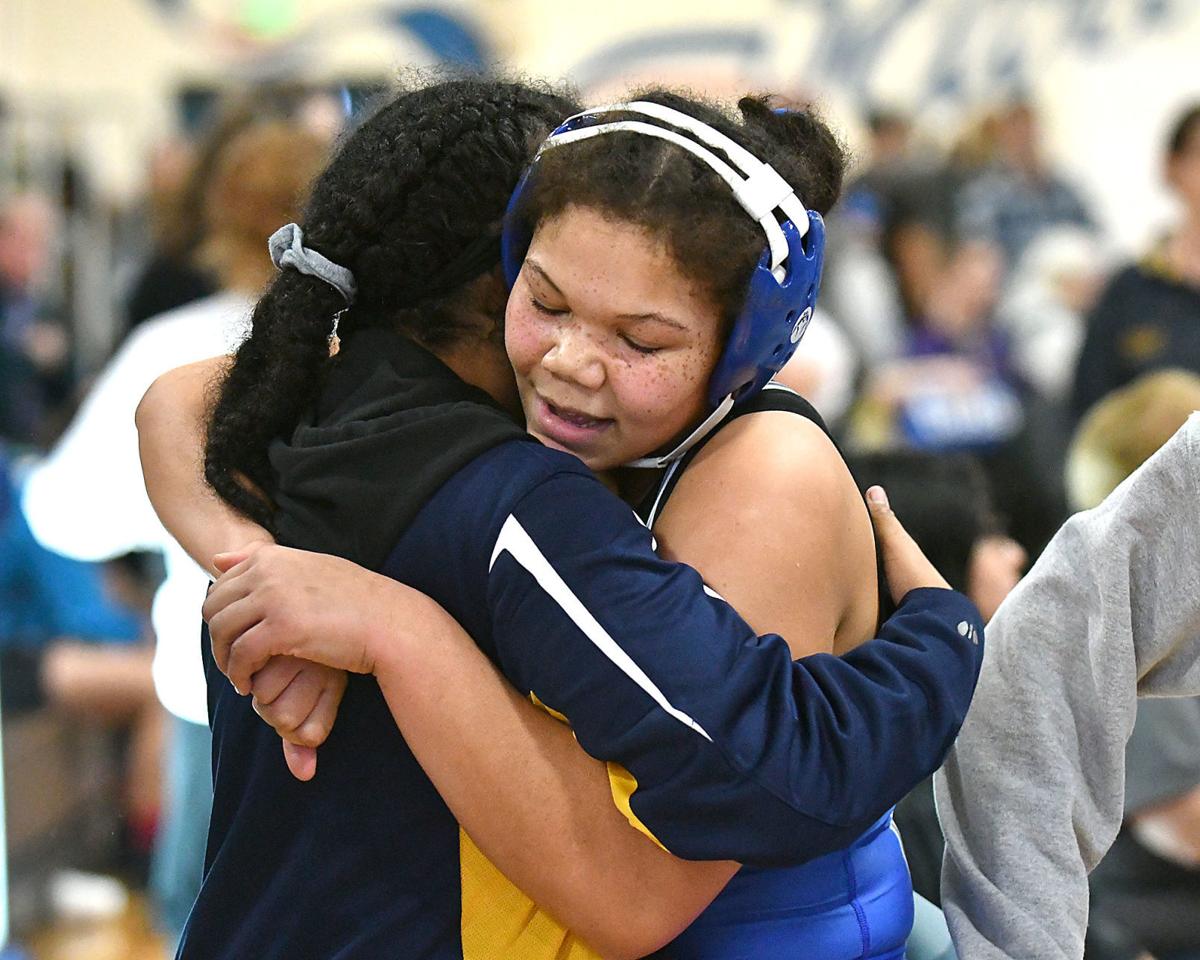 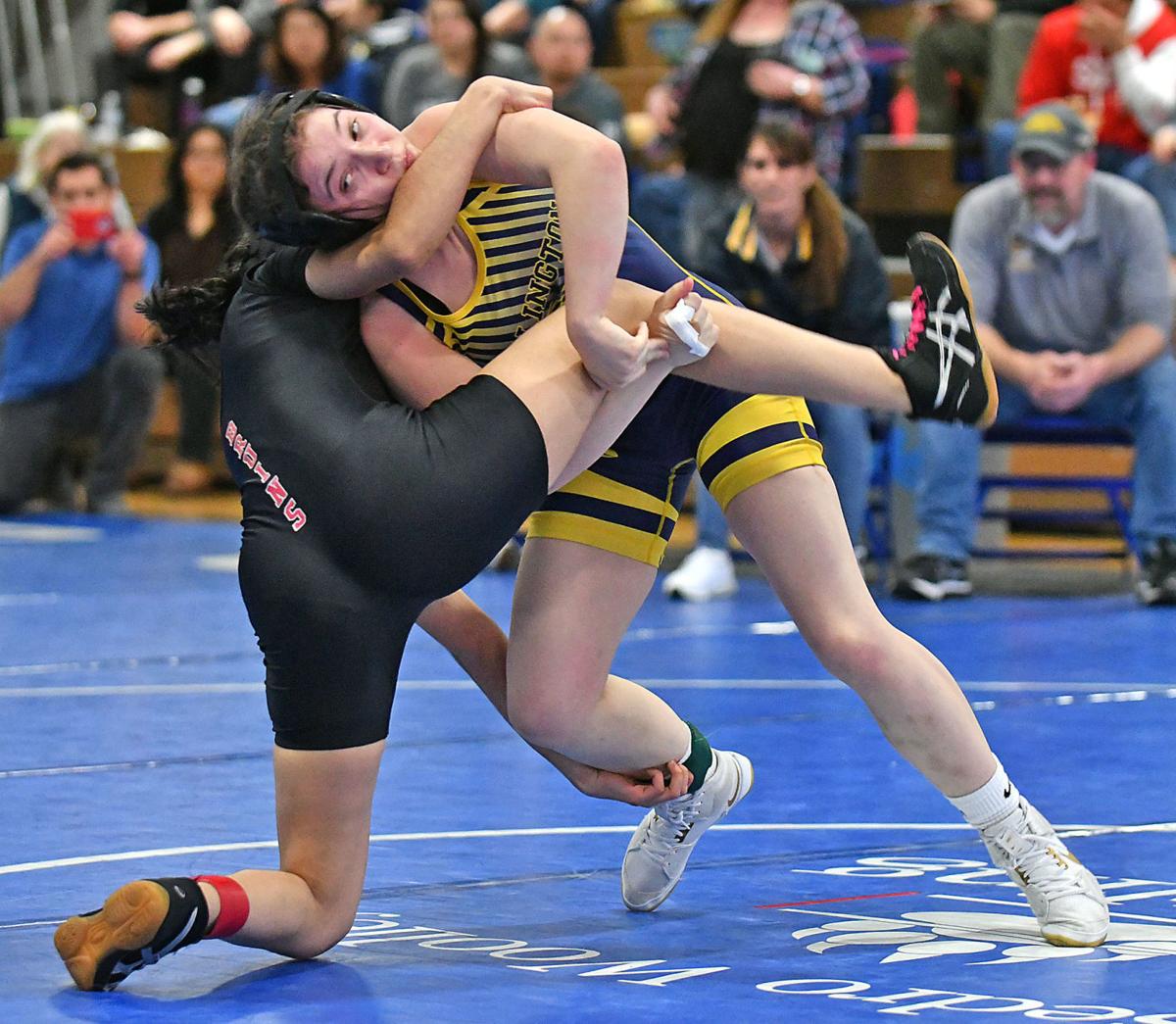 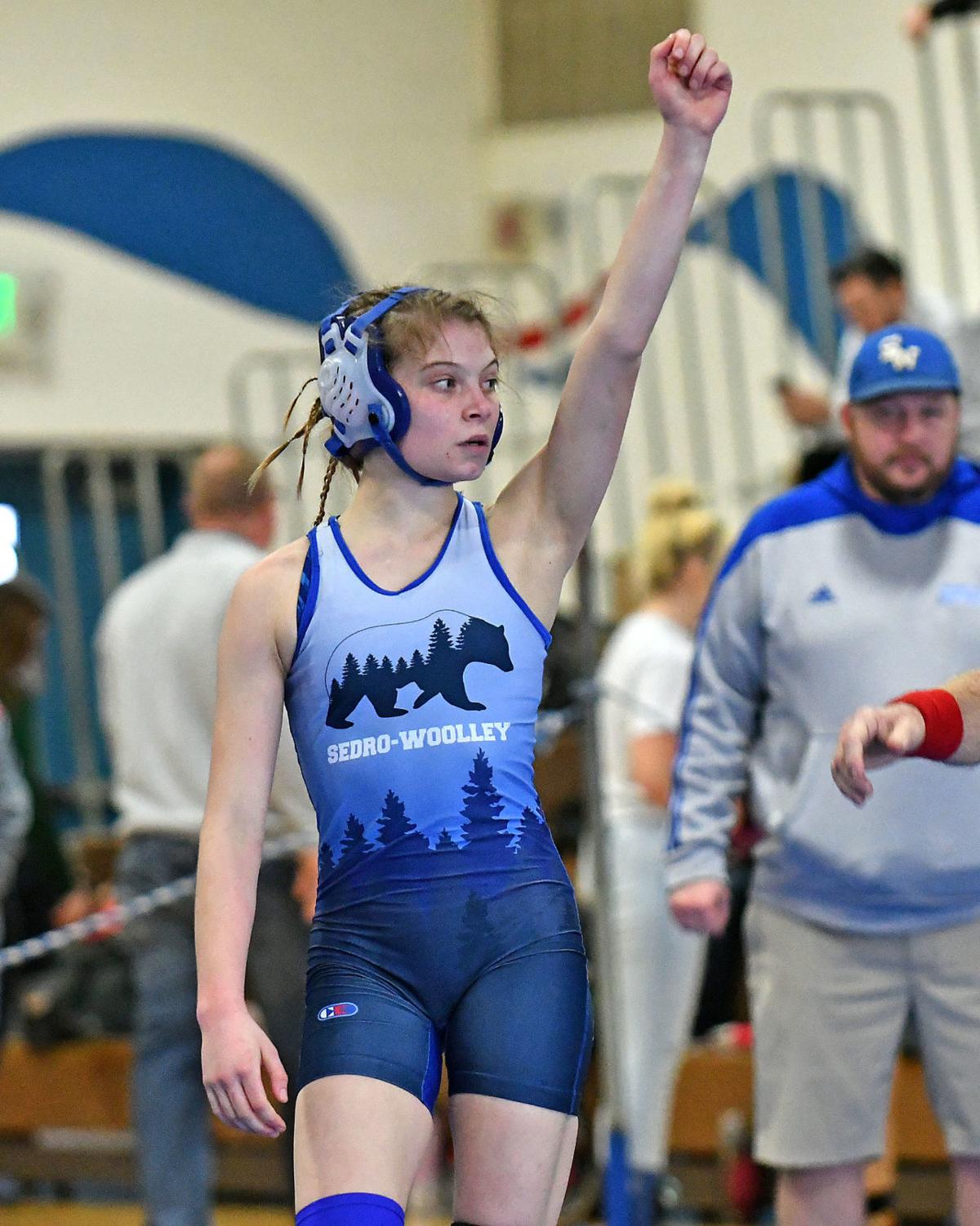 Sedro-Woolley's Shanoah Shanes shows her pleasure at punching her ticket to the state wrestling tournament at 110 pounds. 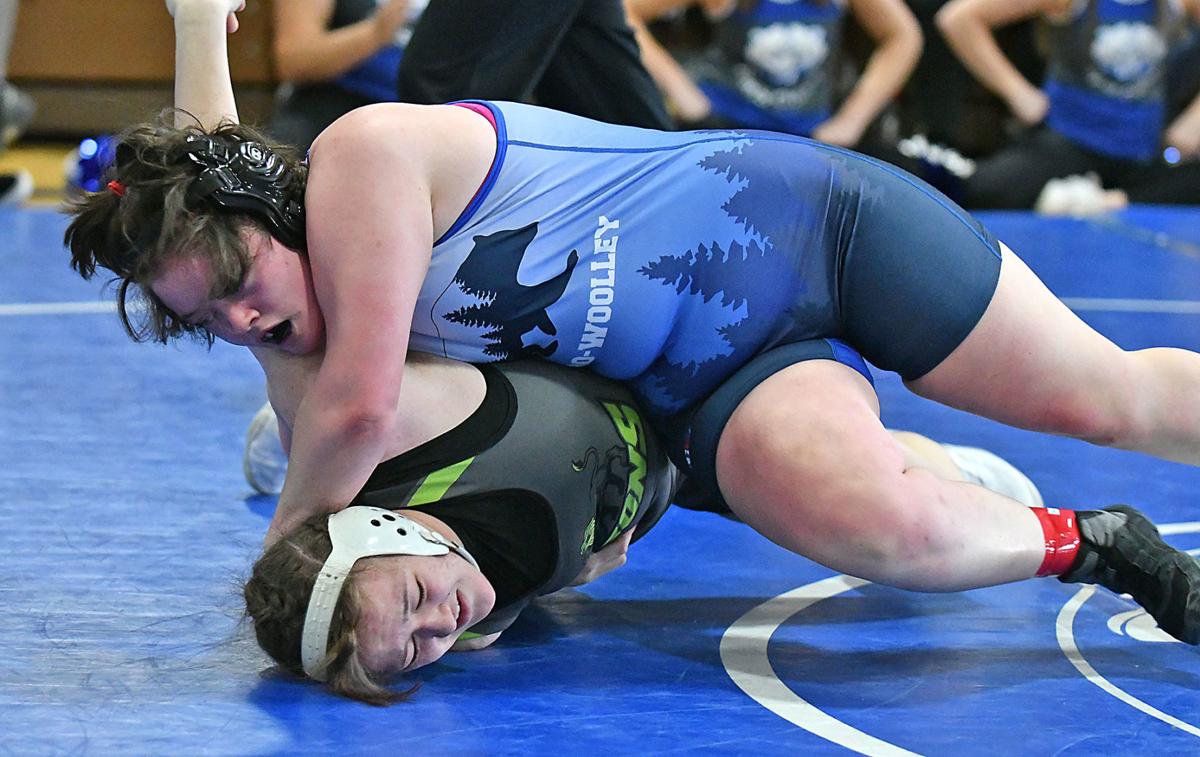 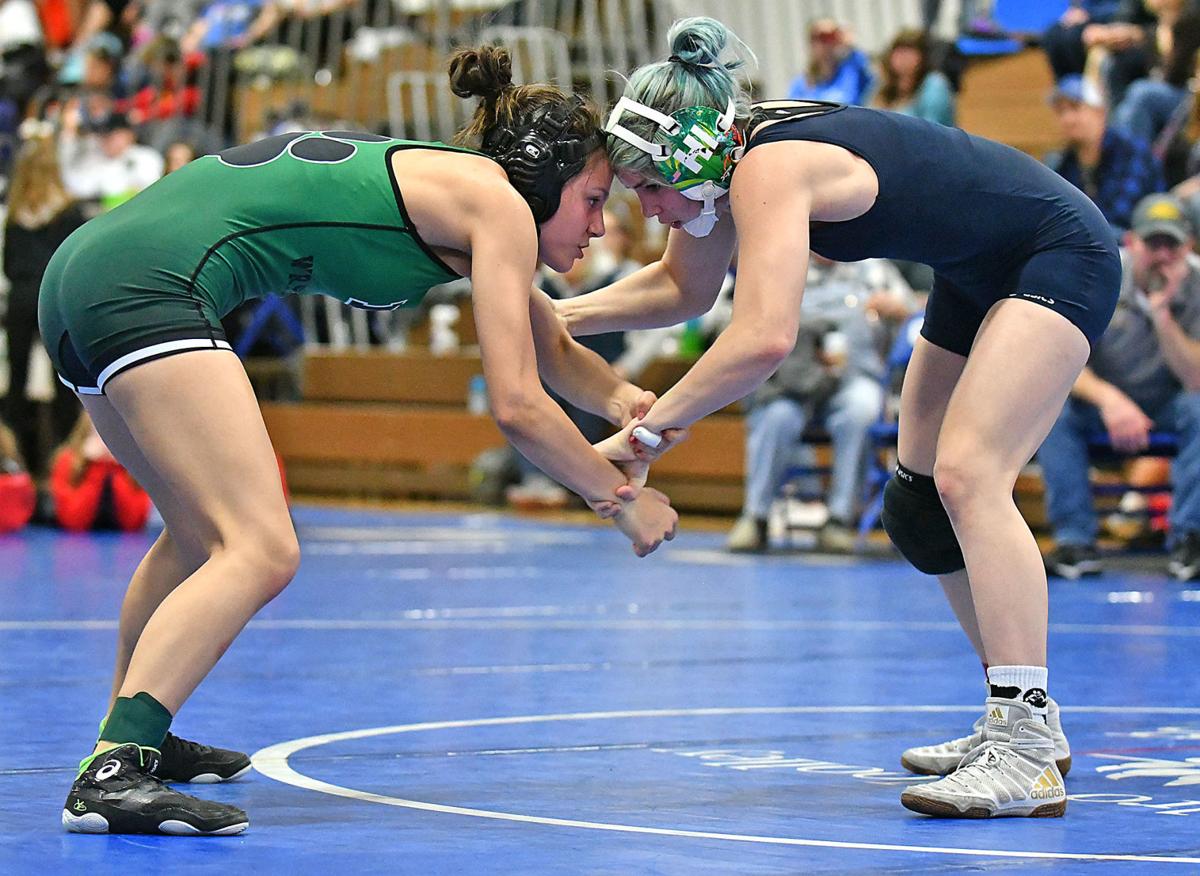 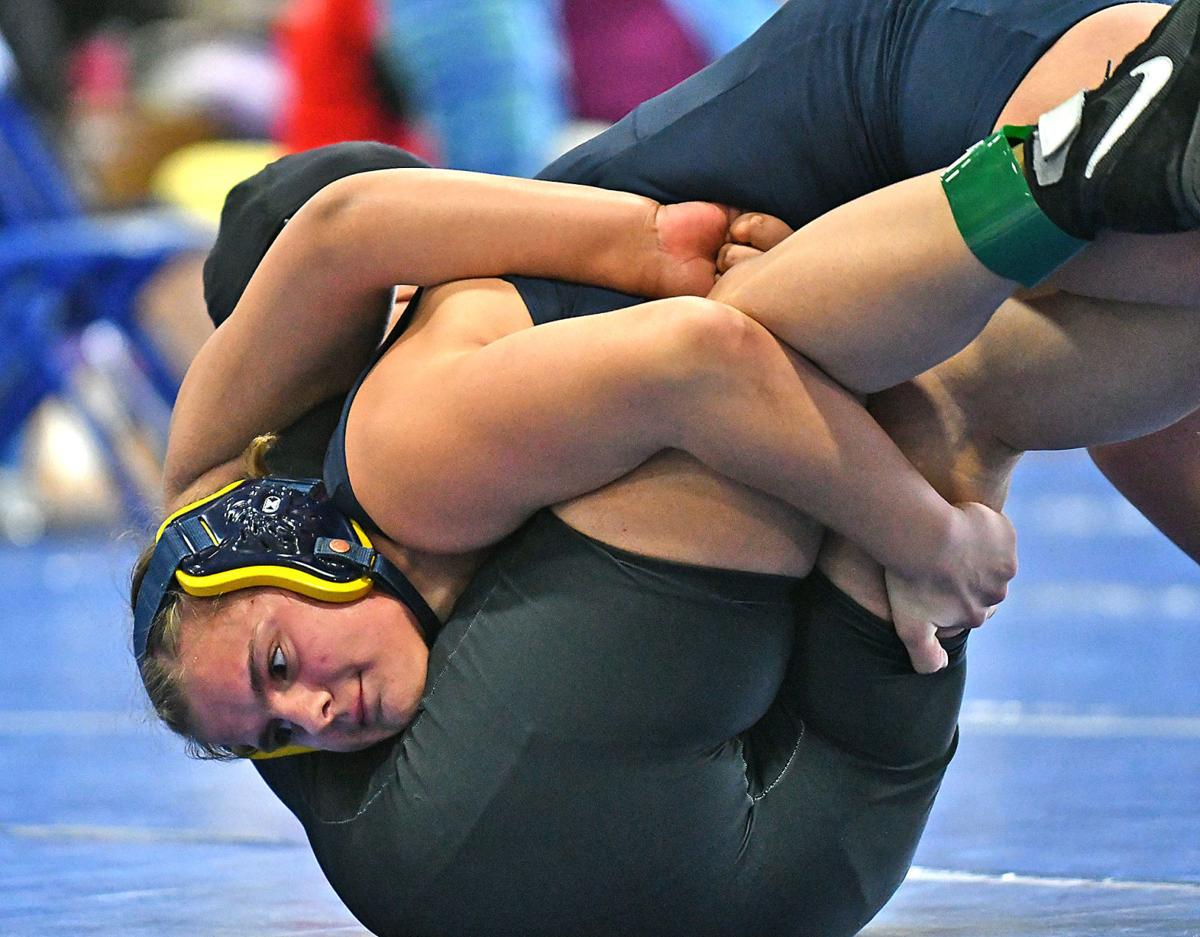 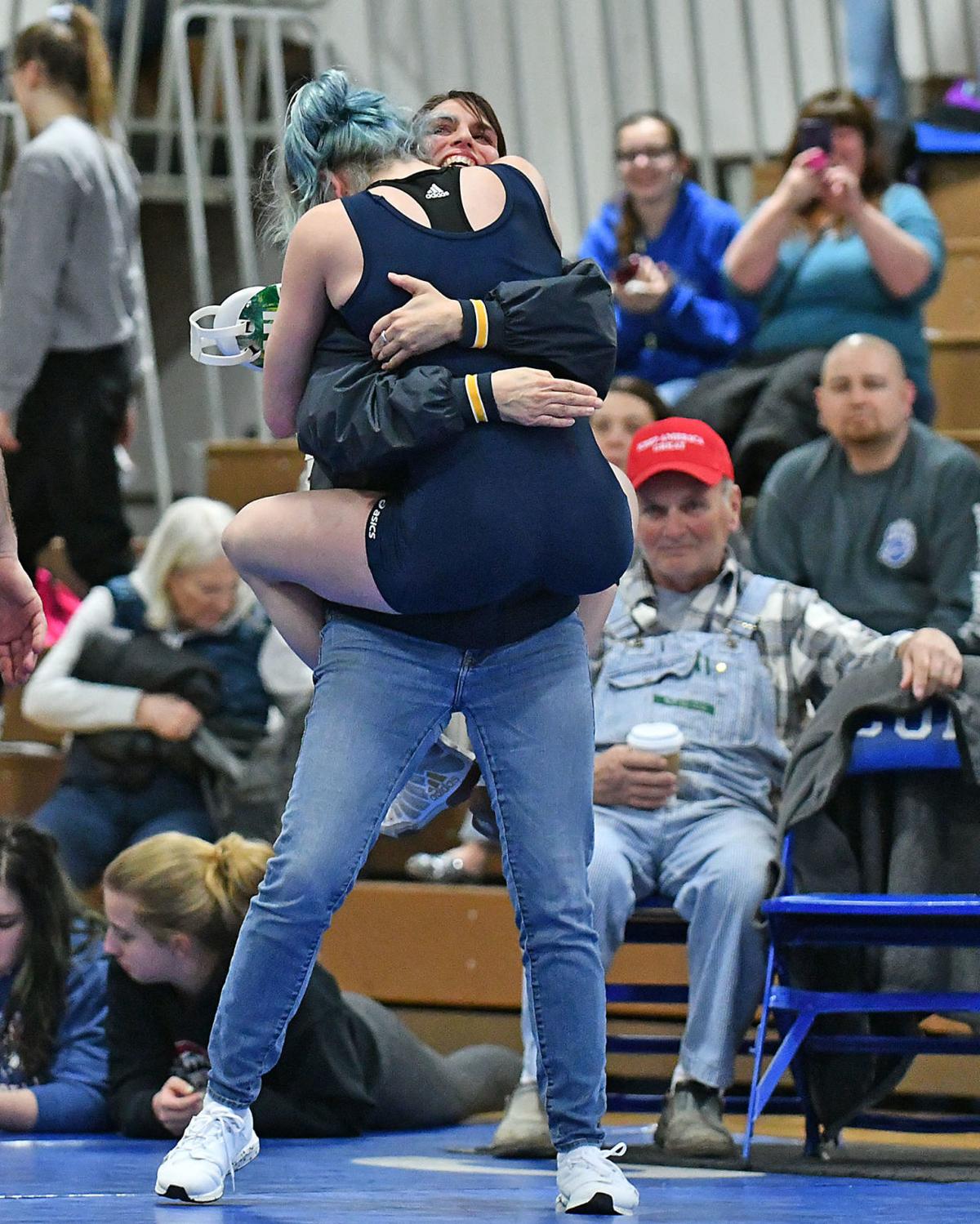 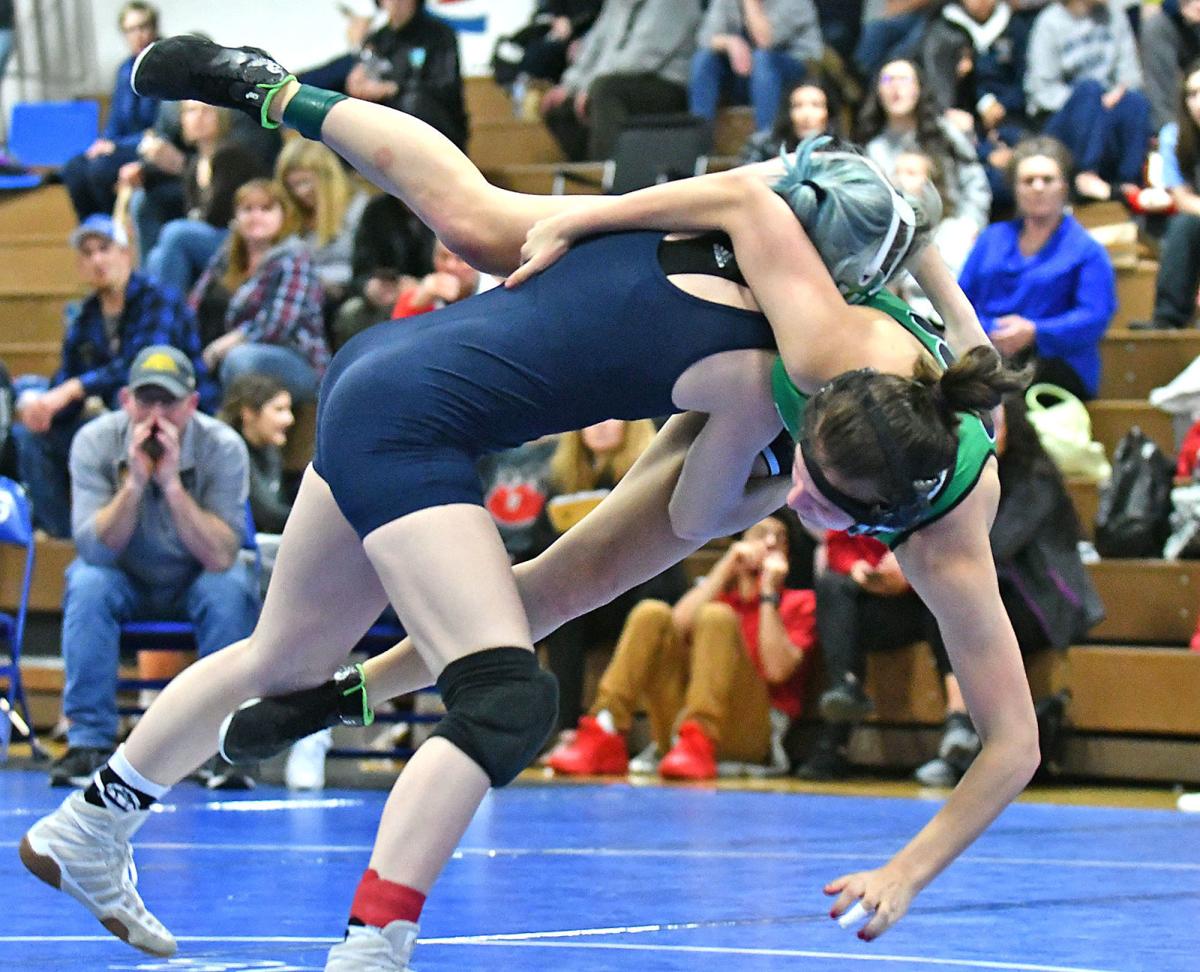 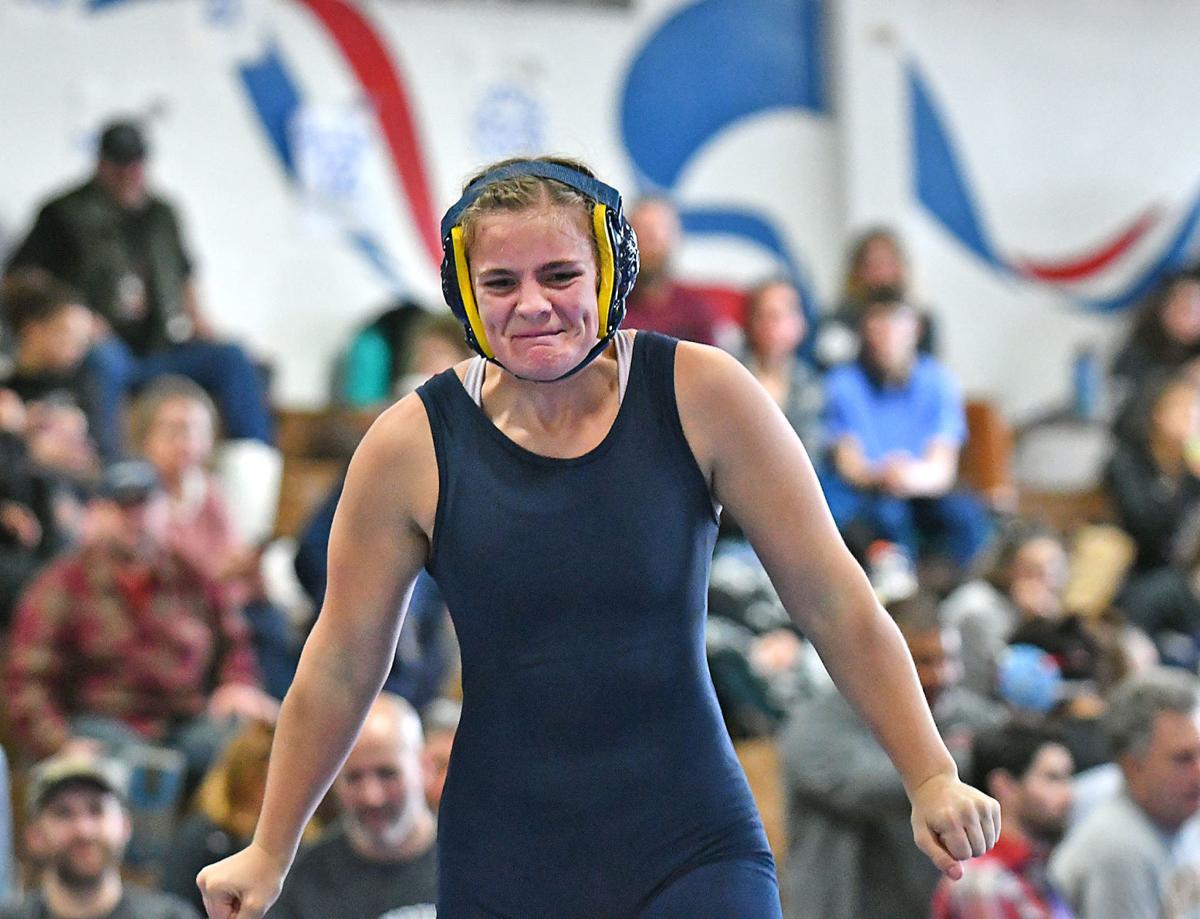 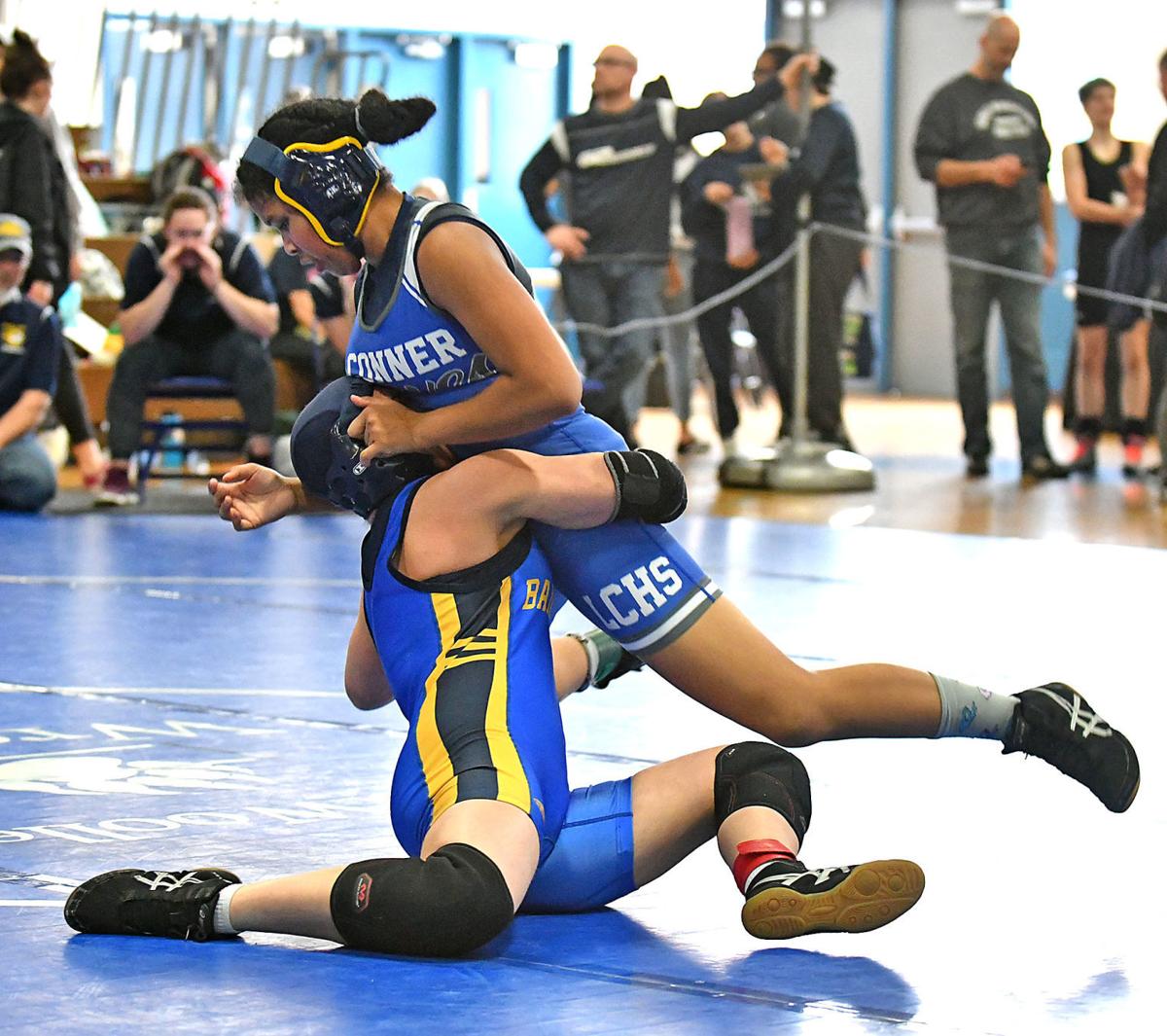 Sedro-Woolley's Shanoah Shanes shows her pleasure at punching her ticket to the state wrestling tournament at 110 pounds.

Myers won in the 105-pound weight class, capping her title with a 12-5 decision over Cascade’s Arshspreet Kaur. Orton’s tournament culminated with a pin of Mount Vernon’s Julie Wilson in the championship match at 120 pounds, and Cobbs wrapped up her title at 155 with a pin of Maria Dailey of Oak Harbor.

“One thing as a team we’ve been talking about is attitude and being positive. They all had that mindset for each and every match,” Burlington-Edison coach Windy Lovejoy said. “Sometimes you get caught up in whole picture but it’s just one match as a time. It was a fun night ... there was good wrestling, good energy.”

All three Burlington-Edison title-winners move on to state as will Wilson by virtue of her second-place finish.

“She came out tough and showed up to wrestle today. She beat a girl she’d lost to previously in the season,” Bulldogs coach Alysia Pohren said of Wilson.

The top four wrestlers in each weight class advance to Mat Classic, which begins Friday.

Lang won the 120-pound weight class with a 9-4 win by decision over Burlington-Edison’s Stephen Cook in the bracket’s title match.

Both Lang and Cook will be headed to the Mat Classic, as will another Skagit County wrestler in the same weight class: Conner Mellich of Sedro-Woolley, who finished fourth.

The top four wrestlers in each weight class qualified for next week’s two-day championship tournament at the Tacoma Dome.

Sedro-Woolley’s Kai Greenough made it to the championship match at 106 where he lost to White River’s Benjamin Milligan. Sedro-Woolley’s Bryce Farruggia placed second at 132. Sedro-Woolley’s Sebastian Hanna earned a state berth with a third-place finish at 182, and teammates Aidan Franklin (third, 160), Ryan Garcia (third, 138) and Carter Berrey (third, 126) did the same.

Seven of the eight Sedro-Woolley wrestlers who competed in regionals earned a state berth.

“We turned it on, it was awesome. It was exactly how we wanted to wrestle. Those kids wrestled their hearts out,” Cubs coach Brady Mast said.

“The kids feel good about their accomplishments, and they should,” Burlington-Edison coach Kip Jones said. “It’s a great reward for a season of hard work ... The kids all had challenging matches and battled through.”

KALAMA — Concrete’s Robert Reed and La Conner’s Arjuna Adams won regional titles on their way to state berths — as did Concrete’s Hunter Olmstead, who upended a familiar foe for the title at 220.

Olmstead beat Sutton Moon of Kalama, who defeated Olmstead for the state title last year. This time, Olmstead beat Moon with a second-period pin to cap a three-win day.

“I told him at the beginning of the year that a lot of guys don’t get the rematch. I said ‘Lucky for you, you’re in same region.’ And he took advantage of it. He caught him on his back, pinned him. A lot of emotion, a lot of excitement. It was a good win but we need to do it next weekend. He knows he can beat him now,” Concrete coach Jesse Dellinger said.

Reed pinned his way through all three rounds, ending with a pin of Rainier wrestler Joe Gerrish in 2 minutes, 53 seconds in the championship match at 132. Adams won his first-round match by pin, then earned decisions in his next two matches, including a 9-3 victory in the title match at 152 over Ilwaco’s Aidan Auttelet.

“He (Reed) is under the radar, nobody talks about him. But he keeps beating guys,” Dellinger said.

La Conner’s Demetrius Scott also earned his way to next week’s Mat Classic thanks to a third-place finish at heavyweight. Teammate Isaiah Adams did the same at 145. Dominic Cassell (fourth place, 195) and Peyton Sanchez (fourth place, 182) of Concrete are also headed to next weekend’s championship tournament at the Tacoma Dome.

Wilson won his first two matches in the tournament before Peyton Motter of South Kitsap won by pin in the championship match at 106.

Wilson will be joined at state by Vyncent Rodriguez, who recovered from a first-round loss to the eventual regional champion on his way to a fourth-place finish at 182.

The top four placers in each weight class earned a state berth.

First-year Mount Vernon coach Tony Keller said team stalwart Joshua Troupe was prevented by injury for qualifying for state, but said the senior was a big contributor this season all the same.

“Everything he’s helped me this year as a leader on the team, it really stands out,” Keller said. “The team appreciates him.”