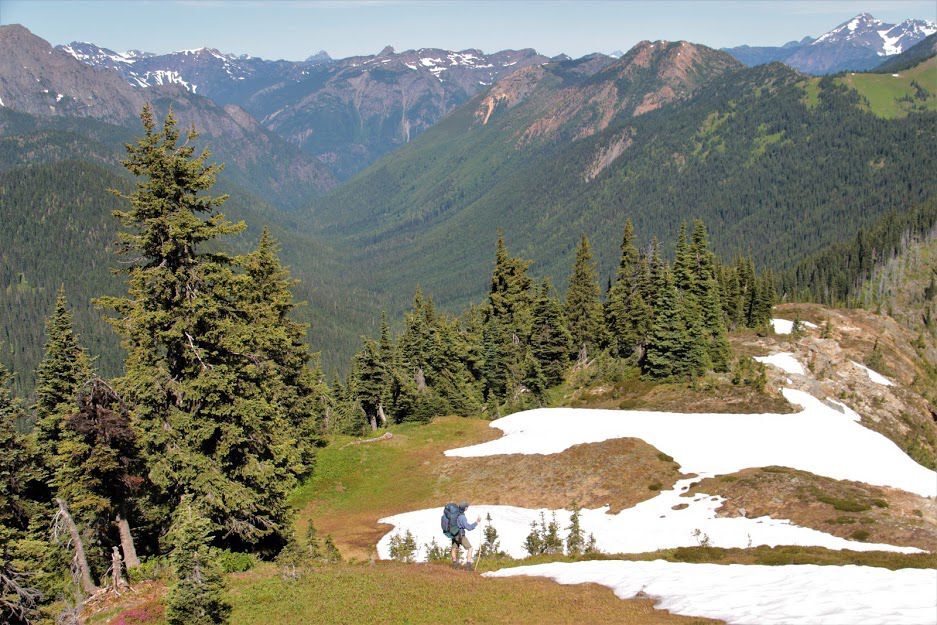 A hiker pauses July 20, 2020, while exploring the “donut hole” between Skagit Valley and Manning provincial parks in British Columbia. The peaks in the donut hole drain into the headwaters of the Skagit River, an area that is at risk of mining. 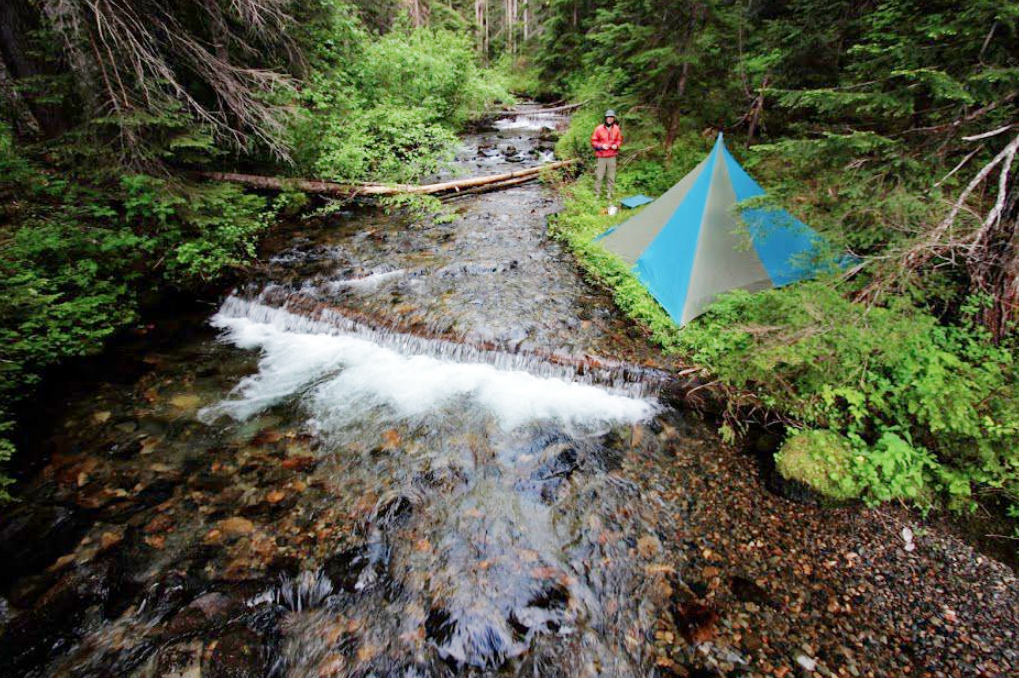 A backpacker makes camp July 17, 2020, on the edge of 26 Mile Creek, which is in the “donut hole” between Skagit Valley and Manning provincial parks in British Columbia, and which flows into the Skagit River. The headwaters of the Skagit River are within the donut hole, and the area is at risk of mining.

A hiker pauses July 20, 2020, while exploring the “donut hole” between Skagit Valley and Manning provincial parks in British Columbia. The peaks in the donut hole drain into the headwaters of the Skagit River, an area that is at risk of mining.

A backpacker makes camp July 17, 2020, on the edge of 26 Mile Creek, which is in the “donut hole” between Skagit Valley and Manning provincial parks in British Columbia, and which flows into the Skagit River. The headwaters of the Skagit River are within the donut hole, and the area is at risk of mining.

Opposition continues to grow on a proposal to mine for precious metals within the headwaters of the Skagit River in British Columbia.

The Sedro-Woolley City Council passed Wednesday a resolution formally opposing the threat of mining, “which involves the use of cyanide and other toxins and often leads to permanent acid mine drainage, which, in turn, could go into the headwaters of the Skagit River,” according to the resolution.

Earlier this month, the city of Anacortes, Port of Skagit and the Samish Indian Nation also passed resolutions against the potential mining.

These local entities join a growing international coalition called Protect the Skagit Headwaters that is against the proposal.

Some coalition members have sent letters to British Columbia officials who have yet to approve or deny a permit for exploratory copper and gold mining in a patch of land called the donut hole because it is surrounded by provincial parks.

“The City of Anacortes is a regional water provider that serves over 65,000 residential, commercial, and industrial customers in the Skagit and Island County communities,” the letter states.

Those customers — including within Anacortes, the town of La Conner, the Swinomish Indian Tribal Community and Naval Air Station Whidbey Island — rely on Anacortes’ ability to produce about 20 million gallons of clean water each day at its Skagit River plant.

“This is an unacceptable risk to the lives and livelihoods of an entire region,” Gere’s letter said of the potential for mining to release toxins into the river.

Gere’s letter said mine-related toxins also pose risks to Skagit River salmon, which make up a major portion of remaining Puget Sound salmon populations and are species in which much has been invested in helping their recovery.

“The Skagit River is our last, best hope to recover diminishing salmon populations and we simply cannot allow one proposal to erase all of that important work,” Gere wrote.

Anacortes is just one of the latest coalition members to ask British Columbia to deny the permit and to eliminate any future threat of mining by permanently protecting the donut hole.

In a resolution passed April 7, the Samish Indian Nation’s tribal council wrote that it “requests that the government of British Columbia ... extinguish extractive rights in this vital region.”

Beyond the salmon in the river, the Samish Indian Nation highlighted that one of the largest wintering populations of bald eagles comes to the Skagit River to eat those fish.

Beyond the river being a source of drinking water, the Port of Skagit recently highlighted that the river’s water is critical to the economy, of which farming is a major sector.

“Port staff and many others in the Skagit Valley are concerned that toxic wastewater from a mining process ... would significantly harm the Valley’s 100,000 acres of prime agricultural land,” Port Executive Director Patsy Martin wrote in an internal memo.

Port Commissioner Steven Omdal said that’s because some crops rely on irrigation water from the river, and that water needs to be clean.

“You see more and more crops being irrigated because of the warmer weather that we are having, so how does that affect agriculture if you are using water that has heavy metals and is contaminated?” Omdal said. “It could affect the yield, it could affect the quality of the crops they are growing ... I think we need to be really cognizant when we look at anything in the food supply or drinking water.”

Omdal said the risk of mine-related contaminants entering the Skagit River seems heightened by the fact that Imperial Metals, the Canadian company that applied in 2018 for the permit to mine the donut hole, has a poor track record in protecting the environment.

That’s a concern that is echoed by members of the international coalition organized by the nonprofit Washington Wild, and one that is included in the resolutions passed by Sedro-Woolley, Anacortes, the Samish Indian Nation and the Port of Skagit.

In late 2020, the coalition included about 200 government, tribal and business members throughout the region. Within the past few months, the coalition grew to 237, and Washington Wild Executive Director Tom Uniack said the movement is showing no signs of slowing down.

The new additions include 13 state legislators, 12 of which represent districts in metropolitan areas from Seattle to Olympia. One, lone Republican coalition member Sen. Brad Hawkins, represents the eastern North Cascades.

While the threat of mining hasn’t been quashed, Uniack said the fact that the permit hasn’t been issued may indicate the swell of opposition is having an impact.

“These mining permits don’t usually take this long,” he said. “The fact that it has been two years and this permit hasn’t moved forward is saying that what we’re doing matters, because it’s a fact of moving a boulder uphill.”